The presidential field is well stocked with women, people of color and millennials, but a majority who said they would vote in a Democratic primary thought candidates who were white, middle-aged and male would be the party’s best bet for defeating Trump.  https://lat.ms/2IpVmst

According to a national poll, conducted with @USCDornsife, female, black and Latino presidential candidates all still face hurdles despite Democrats’ celebration of diversity in their ranks.  https://lat.ms/2IpVmst 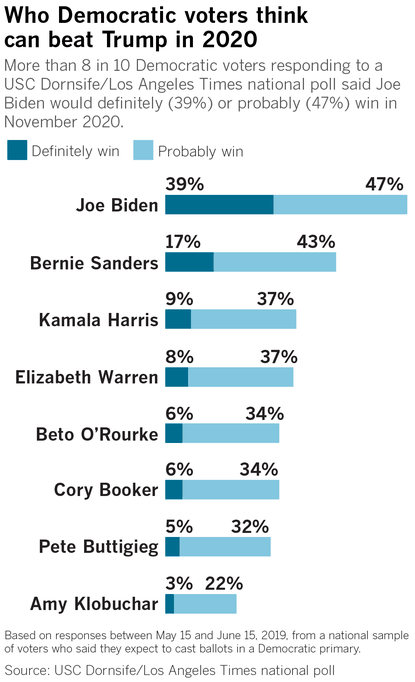 Although voters preferred a middle-age nominee in the abstract, when they were asked about specific candidates, majorities chose the two oldest candidates — Joe Biden and Bernie Sanders — as the ones mostly likely to beat Trump.  https://lat.ms/2Ip6DsZ

Even as Elizabeth Warren has been gaining ground in recent polls, the USC poll found that 55% of Democratic primary voters said Trump would probably (42%) or definitely (13%) beat her.  https://lat.ms/2X78rPz

Kamala Harris and Beto O’Rourke were given roughly the same odds as Warren. Booker, Buttigieg and Klobuchar were judged less likely to win.

Read more about the results from the @USCDornsife and Los Angeles Times poll here:  https://lat.ms/2IpVmst