1/ There was a good thread this weekend started by @semil on how much feedback investors should give to founders when passing:

2/ FWIW I try to always offer detailed feedback when I pass, and I do it without asking for permission first. This is counter to most advice I got when starting my career as a VC.

3/ Specifically, I was warned against giving feedback in order to "preserve optionality." The common belief is that if you give constructive criticism and then a company takes off, the founder is unlikely to let you invest at that point. In my experience, this is a myth.

4/ For years now, I've been writing ~1-page long emails when I pass that basically say: "Sorry, I decided to pass. I'm often wrong, but here are a few things I liked and a few areas where I had hesitations. Finally, here's a quick survey link -- I'd love your feedback."

5/ Is it okay that I give feedback without permission? Do founders value what the feedback or do they find it annoying or insulting or shallow? I've been collecting data on this, and the data in favor of giving feedback has been overwhelmingly positive.

6/ The data comes from an anonymous survey that asks for comments on the @SusaVentures process. So far, I've only seen positive comments about sending feedback. As evidence, here is a screenshot of the last 10 survey replies that mention "feedback": 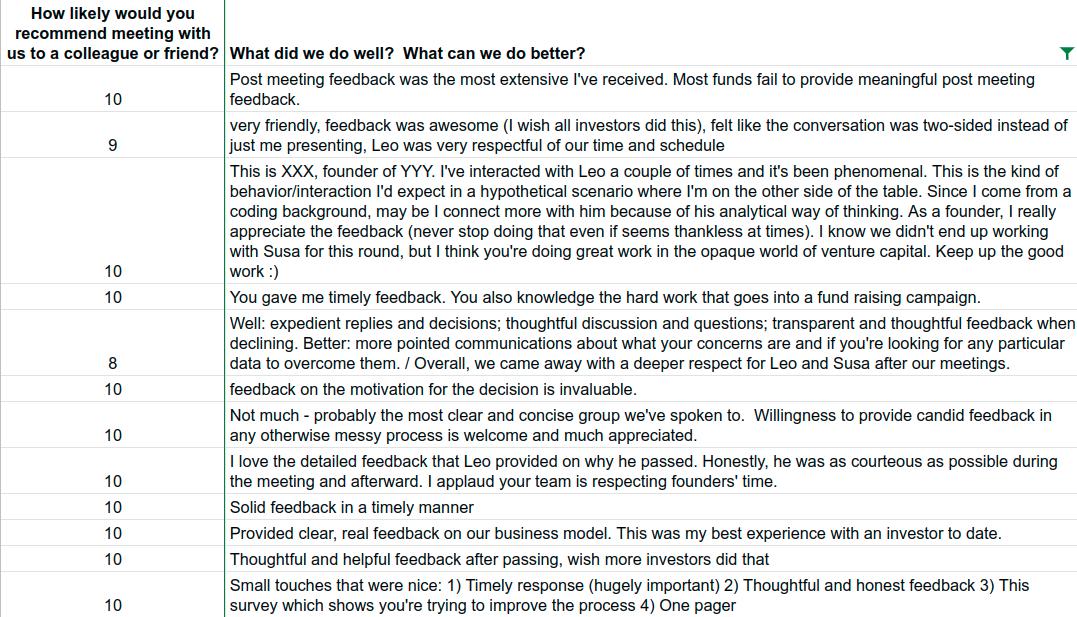 7/ So, after years of sending pass emails w/detailed feedback, I strongly believe that investors should feel comfortable explaning to founders why they're passing. If written tactfully, the feedback is well-received and can help founders hone their pitches and business plans.

8/ Finally, IMHO explaning an investment decision is the right thing to do after taking up several hours of a founder's time. The whole ecosystem benefits when there's more feedback.