You have cleverly packed so many lies into a mere 40 words, it’s hard to know where to begin. But let’s get started, shall we?

Let’s start with $35 million in taxpayer money, because that’s an easy lie to disprove.

1/ Recall that Manafort forfeited assets valued around $42 million. Moreover, when Mueller stopped all that tax fraud, he put more money into U.S. coffers (this amount can’t be calculated).
It’s thus likely the investigation paid for itself or came close.
https://time.com/5557693/mueller-report-cost/ …

2/ What did Benghazi and Whitewater cost?🤔 And what did they find? Let's compare to Mueller's findings.

I know you love the word collusion, but Mueller was not appointed to look for collusion — which I’m sure you know, because no doubt you read the DOJ appointment letter.

3/ If you missed the appointment letter, it’s here.  https://www.documentcloud.org/documents/3726408-Rosenstein-letter-appointing-Mueller-special.html …

Mueller was primarily tasked with “a full and thorough investigation of the Russian government’s efforts to interfere in the 2016 presidential election.” 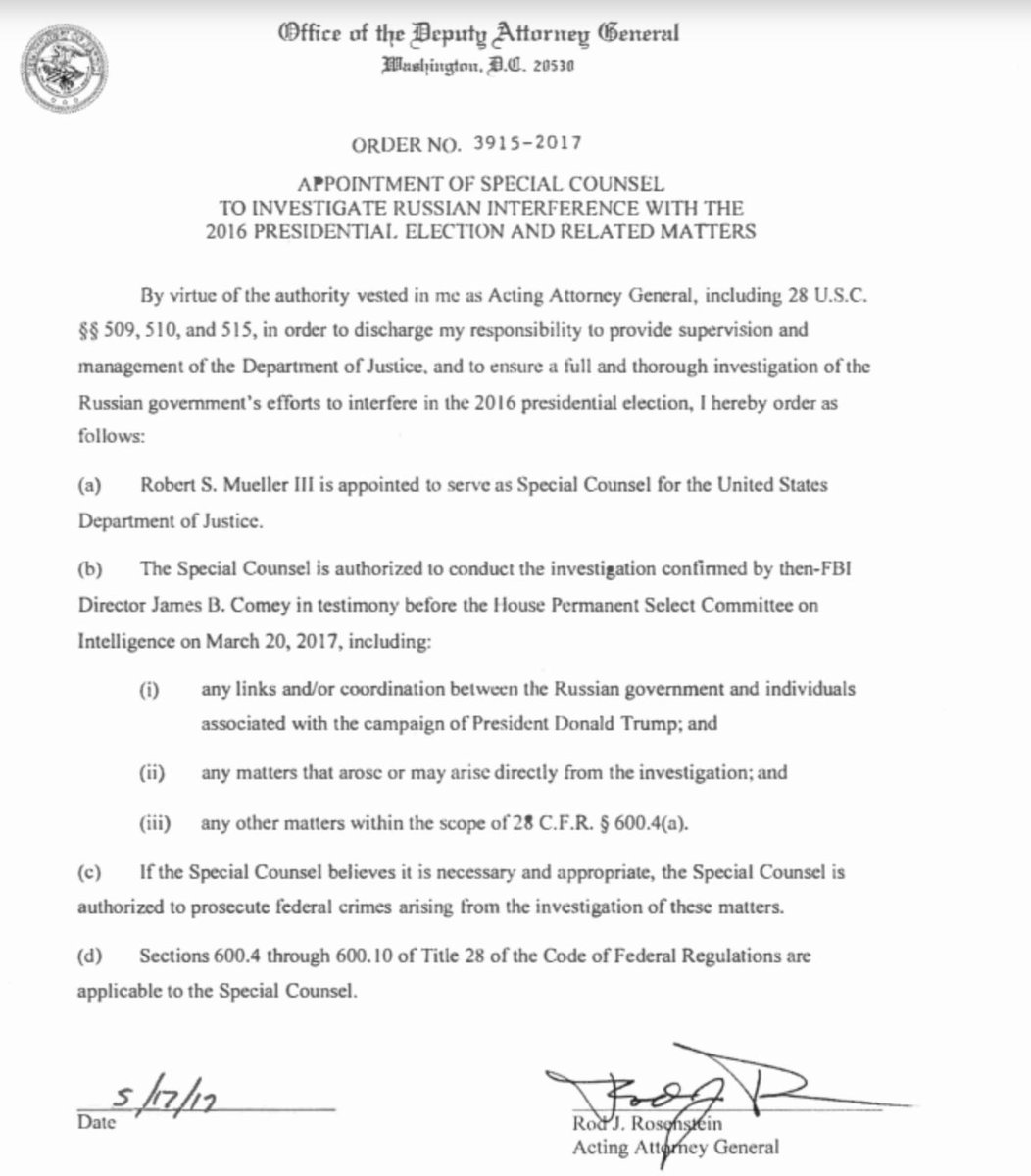 4/ Mueller found that the “The Russian government interfered in the 2016 presidential election in sweeping and systematic fashion.”

Both of these operations violated US law, and Mueller filed indictments.

7/ Mueller also found that Russian Military Unit 74455, a unit of the GRU, hacked computers belonging to state boards of elections, secretaries of state, and U.S. companies that supplied software and other technology related to the administration of U.S. elections.

8/ Please read Tweet #7 again carefully and tell me if you're OK with that.

Mueller also learned that he GRU targeted FL County officials responsible for administering the 2016 US election. The FBI believes this operation enabled the GRU to gain access to the network. . .

9/. . . of at least one Florida county government.

Maybe you're attacking Mueller because the Russians were trying to help the Republicans.

If so, why not admit it!?
Say, "We love Russian interference because it helped the the GOP."

10/ Mueller was also looking for “any links and/or coordination between the Russian government" and individuals associated with Trump's campaign.

And actually, he didn’t say there was no collusion.

He found numerous links between the Trump campaign and Russians . . .

11/. . . but he concluded there wasn't enough evidence to charge a criminal conspiracy.

You can read about the boatload of links between the Trump campaign and Russians on pages 67-123 of the Mueller report.

Or, if you prefer, I summarized them here👇

12/ Mueller found links, but no crime, because a criminal conspiracy “requires more than the two parties taking actions that were informed by or responsive to the other’s actions or interests.” (Mueller report, Vol. 1, p.2)

13/ Newsflash: Just because it isn’t a crime doesn’t mean it wasn’t bad.

Some of us think that the Trump campaign being informed and responsive to Russian attackers was bad.

You mentioned a “wild impeachment goose chase.” It’s only a goose chase if the person did nothing wrong.

14/ Did you see this? The recommendation that Kellyanne Conway be removed came from the gov. agency tasked with enforcing the Hatch Act.
https://www.cnbc.com/2019/06/13/federal-agency-recommends-kellyanne-conway-be-removed-from-government.html …
Are you aware, as you discredit and undermine American agencies and law enforcement, that you're doing Putin’s work?

15/ I'm NOT accusing you of "colluding" with the Kremlin 😉

I'm suggesting that your goals align with the Kremlin, and that, in unleashing a firehose of falsehoods, you are helping Putin undermine western Democracy.

Just like the Trump campaign's interests aligned with Russia.

Your supporters know you're lying. They pretend to believe you because that's the game.

The rest of us also know the truth.

If you want to read more about the "Firehose of Falsehoods" propaganda method, popularized by Putin and copied by members of the Trump-FOX-GOP, see👇
https://www.rand.org/pubs/perspectives/PE198.html …

The method is simple and effective: unleash a firehose of lies.

The antidote: Put on a raincoat.

All my threads are also blog posts. You can read this one here:  https://terikanefield-blog.com/responding-to-rep-jim-jordan/ …
If you haven't visited my beautiful* blog, please do. There's a search function, and the threads are indexed.

*I designed it (getting lots of technical help), so I'm proud.