NEW: In a 5-4 ruling along party lines, the Roberts Court holds that partisan gerrymandering cannot be challenged under the U.S. Constitution. This is a historic defeat for fair elections  https://www.dailykos.com/stories/2019/6/27/1859377/-Supreme-Court-undermines-free-and-fair-elections-by-refusing-to-limit-partisan-gerrymandering …

This ruling means that court rulings that had overturned gerrymanders in Maryland, Michigan, North Carolina, Ohio, & Wisconsin will all be overturned, largely benefitting Republicans nationwide at both the federal & state level

These three maps explain just how devastatingly effective partisan gerrymandering can be, and the Supreme Court just opened up the floodgates to even more extreme maps  https://www.dailykos.com/stories/2016/10/27/1579905/-These-three-maps-show-just-how-effectively-gerrymandering-can-swing-election-outcomes … 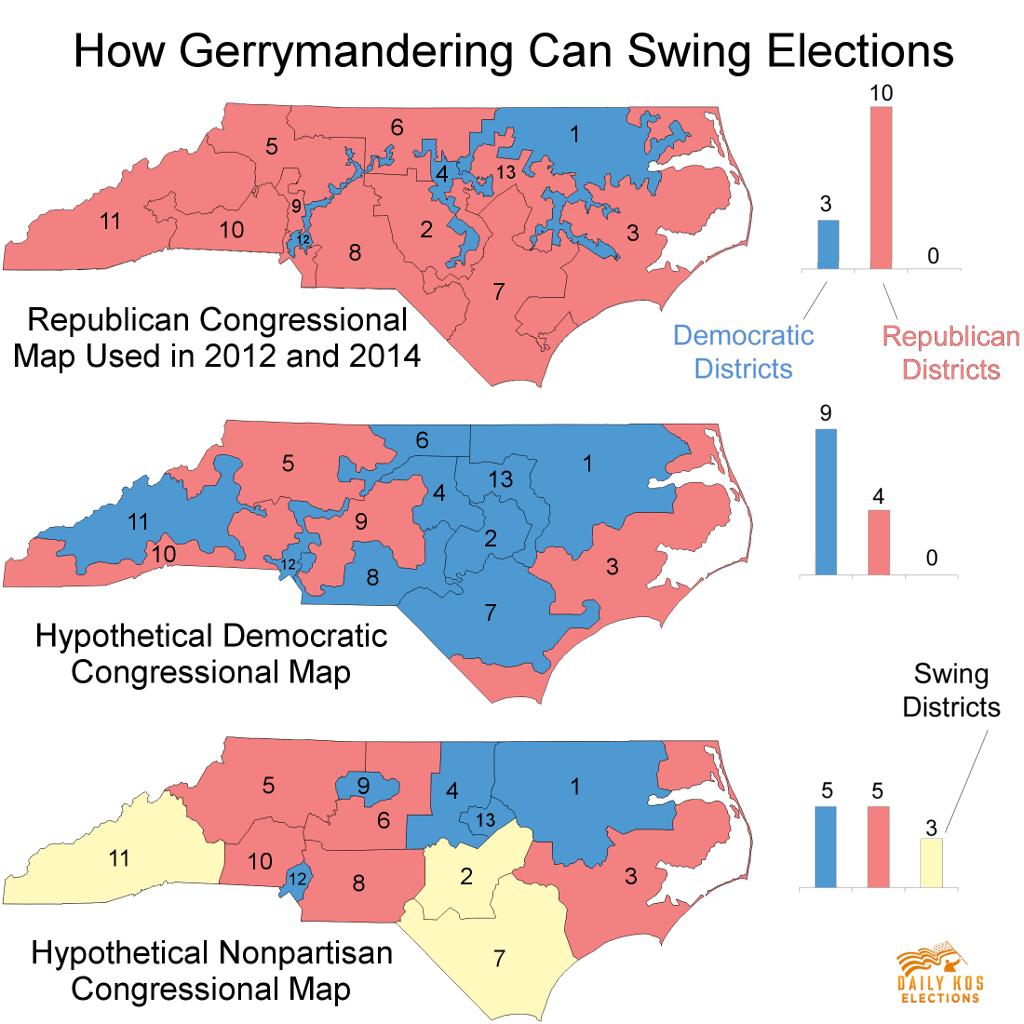 After the 2018 elections, Republicans could have up to a 4-1 advantage in getting to gerrymander congressional districts & a similarly lopsided edge drawing the states. Post-2020 redistricting could be as bad as 2010 for #FairMaps  https://www.dailykos.com/story/2019/1/1/1818315/-Democrats-make-major-inroads-against-GOP-gerrymandering-but-the-GOP-still-holds-a-big-edge-for-2020 … 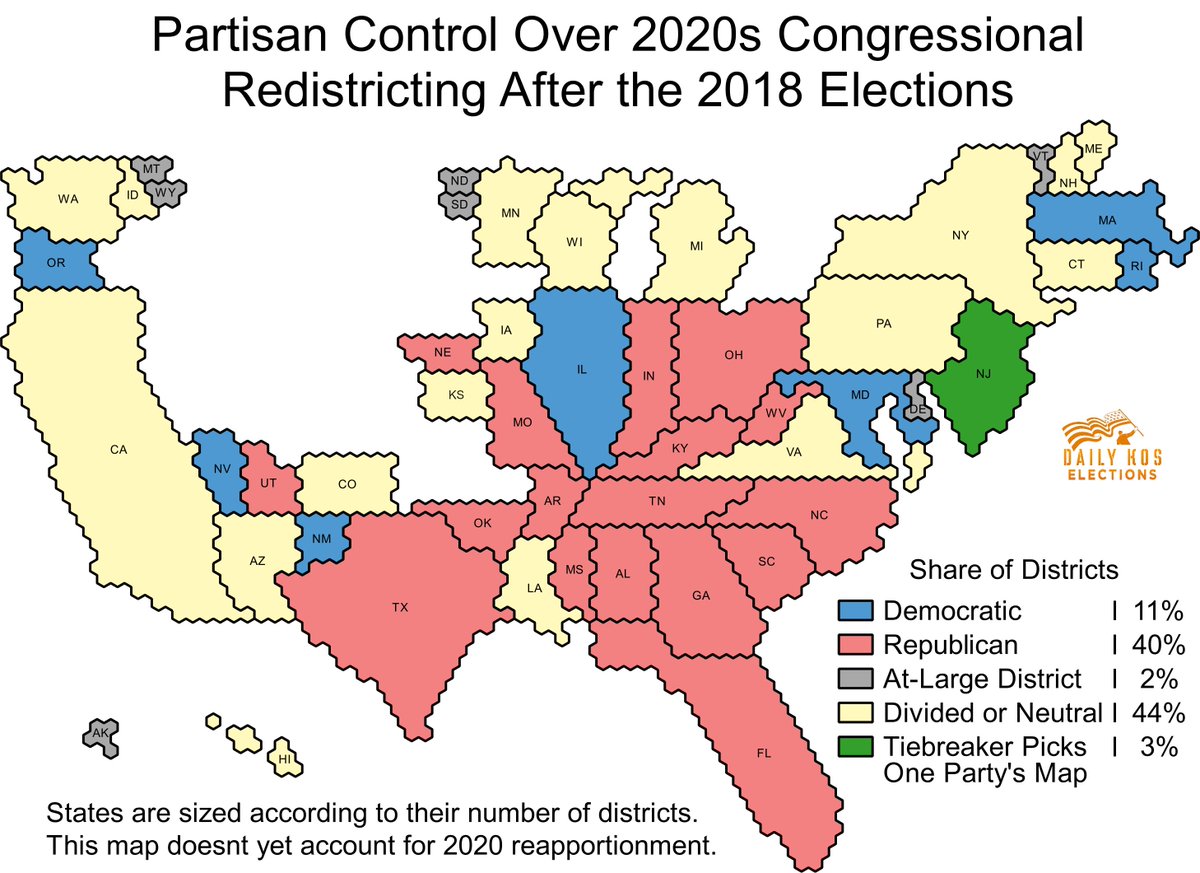 Now the battle over partisan gerrymandering moves to the states. These five states hold critical state supreme court elections, & their rulings under state constitutions could be immune from federal review  https://www.dailykos.com/story/2019/4/3/1847471/-2020-state-supreme-court-elections-are-key-for-stopping-GOP-gerrymandering-in-these-five-states … 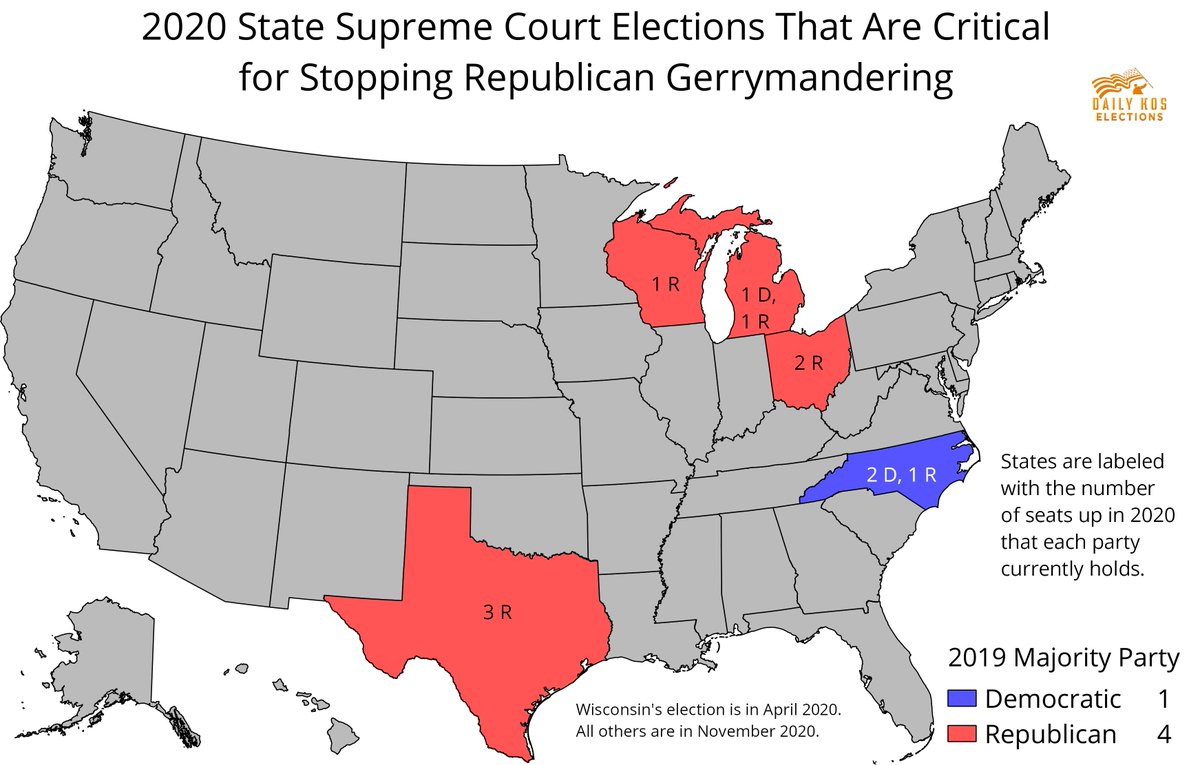 Democrats could take control of critical state Supreme Courts in Michigan, Ohio, Wisconsin, & Texas & block some of the most heinous GOP gerrymanders next decade

The Court's naked partisanship will get even worse if Roberts lets Trump rig the census. Not only will we be unable to challenge GOP gerrymandering under the Constitution, but the GOP can further rig it by excluding millions of Latinos from representation

Nothing in federal law requires that congressional districts be contiguous. Imagine the Roberts Court not stepping in if a Republican state decided to pack all of the Democratic precincts into a minority of districts (or crack all of them) regardless of where they're located

And confirmed by a Senate where Democratic candidates won millions of more votes than Republican senators. This is a mockery of democracy & the rule of law

If Democrats miraculously win back both the Senate & presidency in 2020, they need to nuke the filibuster, admit more states such as D.C. to rebalance the Senate, & somehow reform the Supreme Court to reign in its GOP majority's lawlessness. Democracy's survival depends on it

WOW, at least the Supreme Court didn't yet let Trump rig the census by adding a citizenship question that documents show was motivated by racism & partisanship. It goes back to the lower court for reconsideration, which could doom it in light of recent evidence!

NEW: American democracy dodges a massive bullet after the Supreme Court rejects the Trump administration's pretext for rigging the census citizenship question, sending it back to lower court. The issue isn't over, but new evidence could doom it  https://www.dailykos.com/stories/2019/6/27/1867146/-After-bombshell-new-evidence-Supreme-Court-sends-census-citizenship-case-back-to-lower-court …

Bombshell evidence from a deceased GOP gerrymandering expert showed how Republicans aimed to add the question to create a "a disadvantage to the Democrats" and be "advantageous to Republicans and non-Hispanic whites." Allowing it would have been on par with Bush v. Gore

There needs to be an immediate lawsuit challenging North Carolina's extreme GOP congressional gerrymander in state court. Dems hold a 6-1 majority on NC's Supreme Court, which is poised to strike down the GOP's legislative maps ahead of 2020  https://www.dailykos.com/story/2018/11/13/1812549/-Democrats-sue-over-North-Carolina-GOP-s-legislative-gerrymanders-They-have-a-solid-chance-to-win … 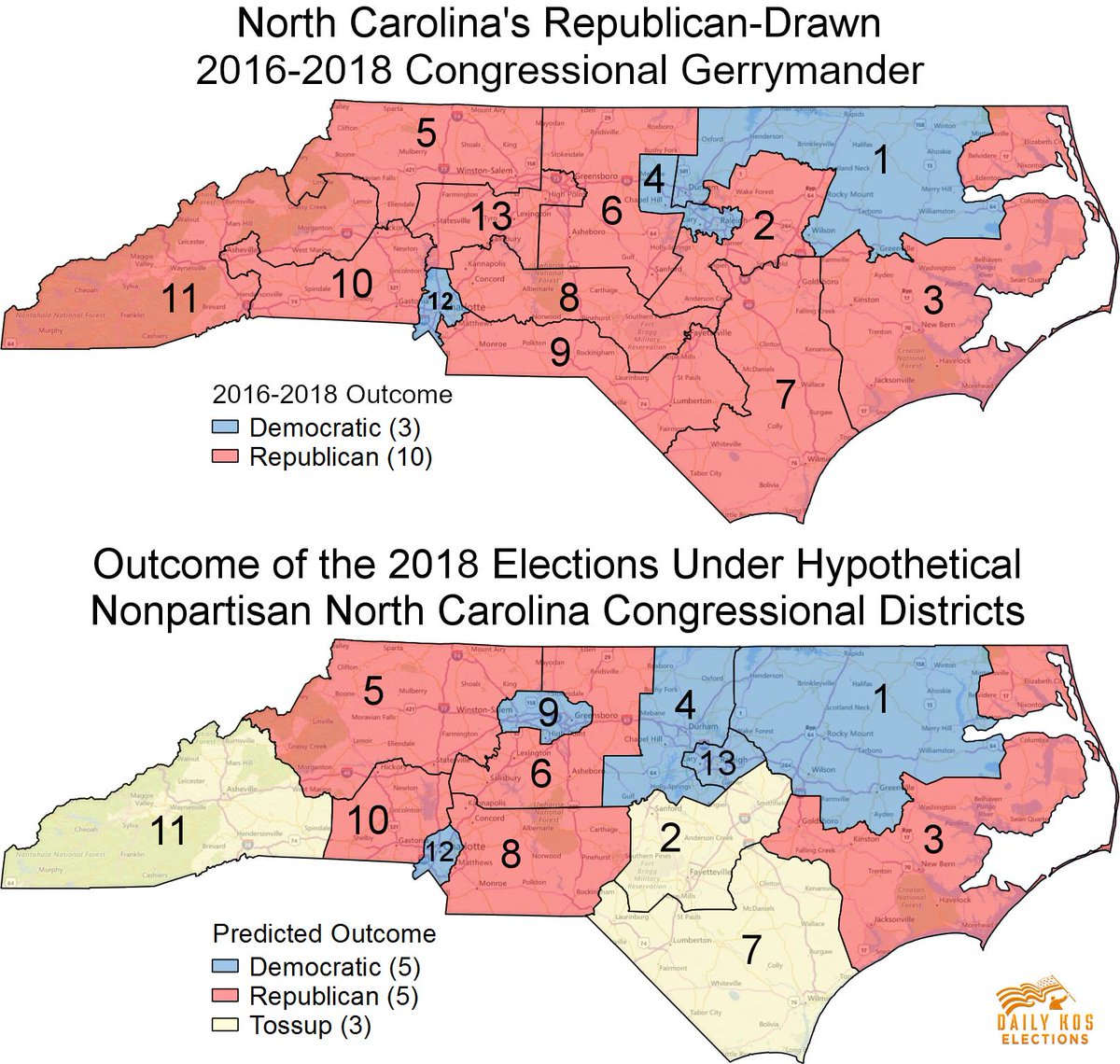 Trump is but a symptom of a greater disease within the Republican Party, which has turned against democracy itself. But his incompetence compared to a "normal" Republican like Ted Cruz or Tom Cotton may have partly saved America from the worst of the worst on election-rigging

Had SCOTUS let Trump rig the census with the citizenship question, it would've struck a double blow against fair representation via undercounts & turbocharged GOP gerrymandering that could've permanently locked Dems & minorities out of legislative power  https://www.dailykos.com/story/2019/5/31/1861675/-Voting-Rights-Roundup-Smoking-gun-shows-census-citizenship-case-is-a-GOP-plot-to-rig-redistricting …

The Supreme Court's Republicans dealt a historic blow against efforts to fight partisan gerrymandering today, but they averted the most catastrophic double whammy. Now, the effort proceeds to the states, where state constitutional protections are critical. This fight isn't over

NEW: Here are five ways you can help fight partisan gerrymandering now at both the state & congressional level #FairMaps  https://www.dailykos.com/stories/2019/6/27/1867679/-Here-are-five-ways-you-can-fight-gerrymandering-right-now … 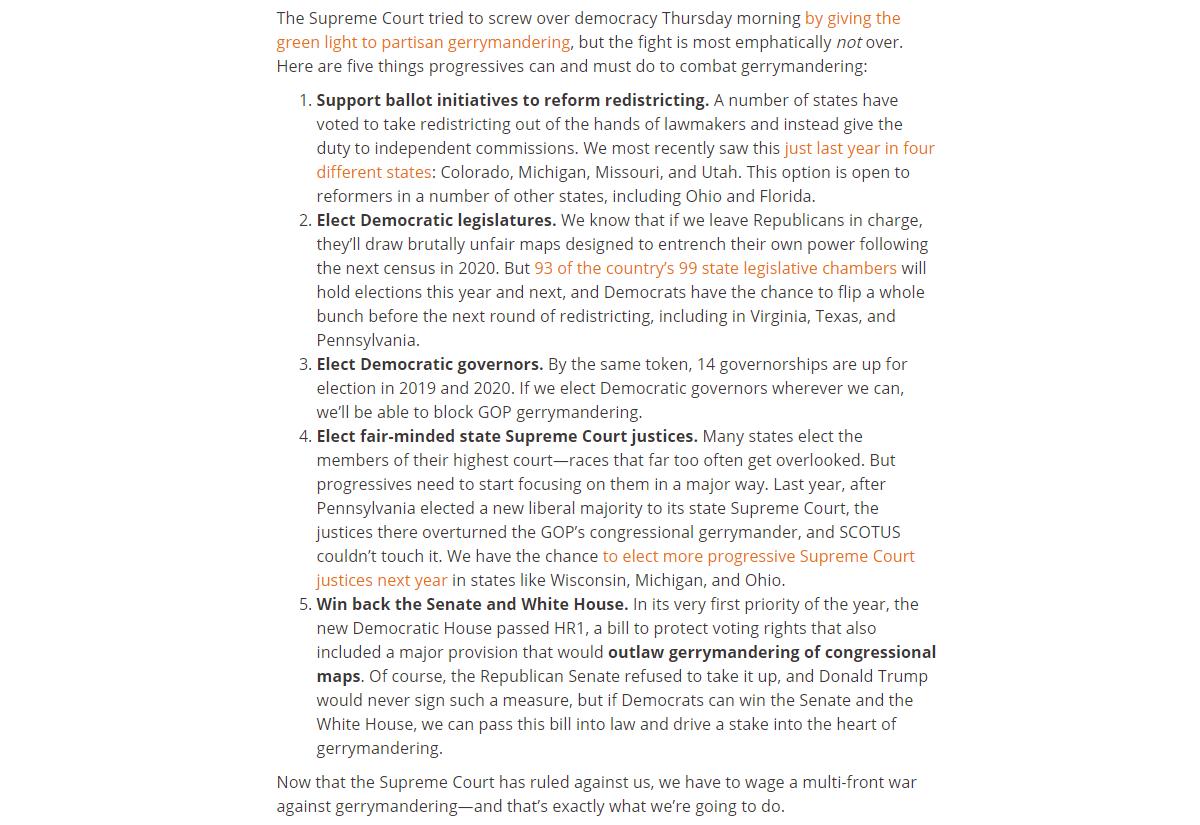 There was not a single question about partisan gerrymandering at last night's #DemDebate. Gerrymandering & voting rights absolutely need to be a major focus of tonight's debate & many going forward

This is why partisan gerrymandering is growing ever-more powerful. It isn't about technological advancements but historic polarization that shows no signs of abating

Even during the 2018 Dem wave, Ohio GOP kept the same 12-4 congressional majority that they've held all decade. This gerrymander got struck down, & a nonpartisan map could've seen Dems win 4 more seats in 2018, but SCOTUS will soon overturn that ruling  https://www.dailykos.com/story/2019/5/3/1855134/-Court-strikes-down-Ohio-gerrymander-GOP-maps-so-skewed-they-predetermined-election-results … 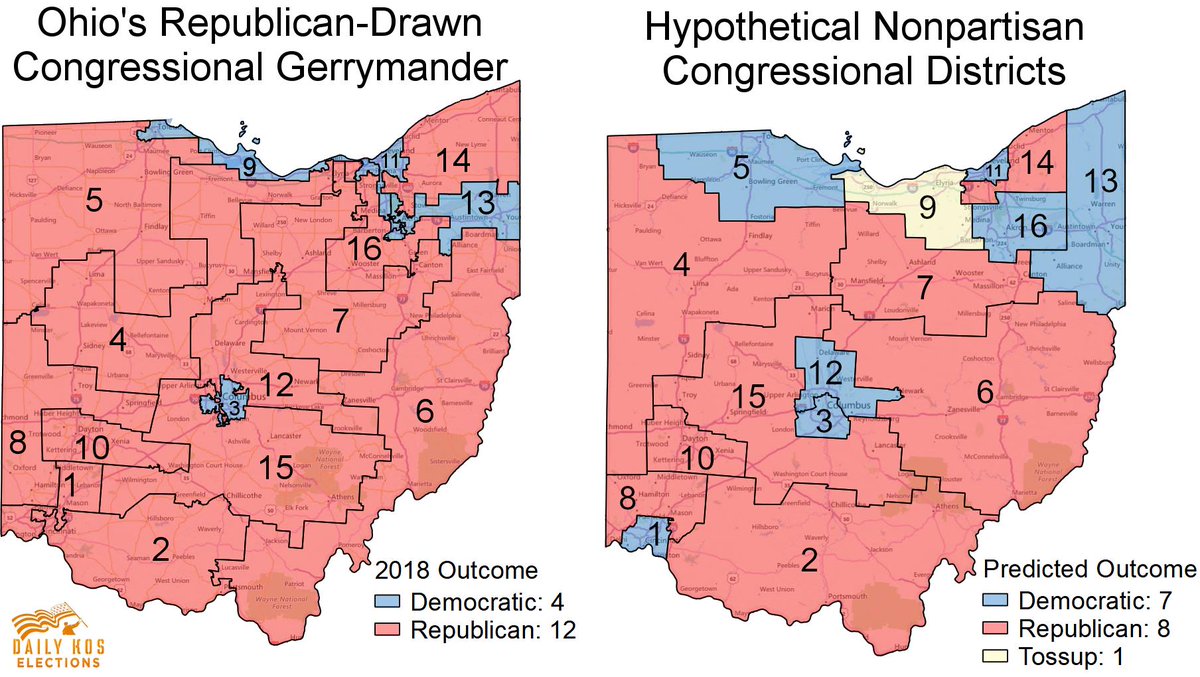 Between 2017 & 2018, Democrats won the most votes yet Republicans retained legislative majorities thanks to unfair maps in Michigan, North Carolina, Pennsylvania, Wisconsin, & Virginia. Dems could have won full control over some of those states without Republican gerrymandering

A reminder that American liberal democracy is far younger & more fragile than many realize: It's only 54 years old, following the passage of the 1965 Voting Rights Act & Supreme Court "one person, one vote" decisions

Closing this thread by recommending everyone read "How Democracies Die" by @dziblatt & Levitsky. We need structural reforms as I've noted in this thread to save democracy from a radical GOP, but we must also avoid an endlessly escalating death spiral  https://www.penguinrandomhouse.com/books/562246/how-democracies-die-by-steven-levitsky-and-daniel-ziblatt/9781524762940/ …

This isn't true nationally & supposedly (but not really) random maps don't prove it. Dem voters' concentration in cities is counterbalanced by districts being drawn to include nonvoters. Dem districts have more noncitizens/children, hence the GOP citizen-based redistricting plot 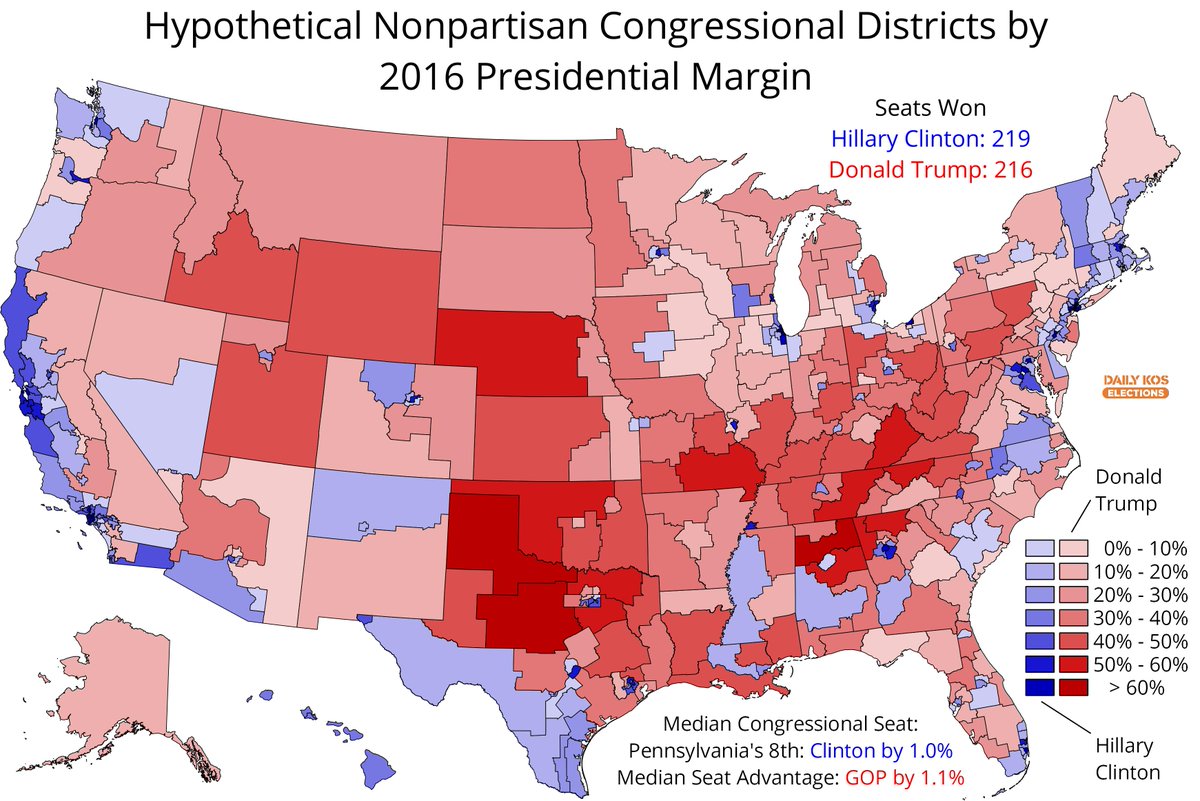 Under the congressional maps used in 2018, Trump had a median seat bonus of >4%, meaning a 4% loss would have won him half the seats. Under our maps, it's only a 1% Trump bonus, suggesting gerrymandering is responsible for 3/4 of the national bias in favor of Republicans 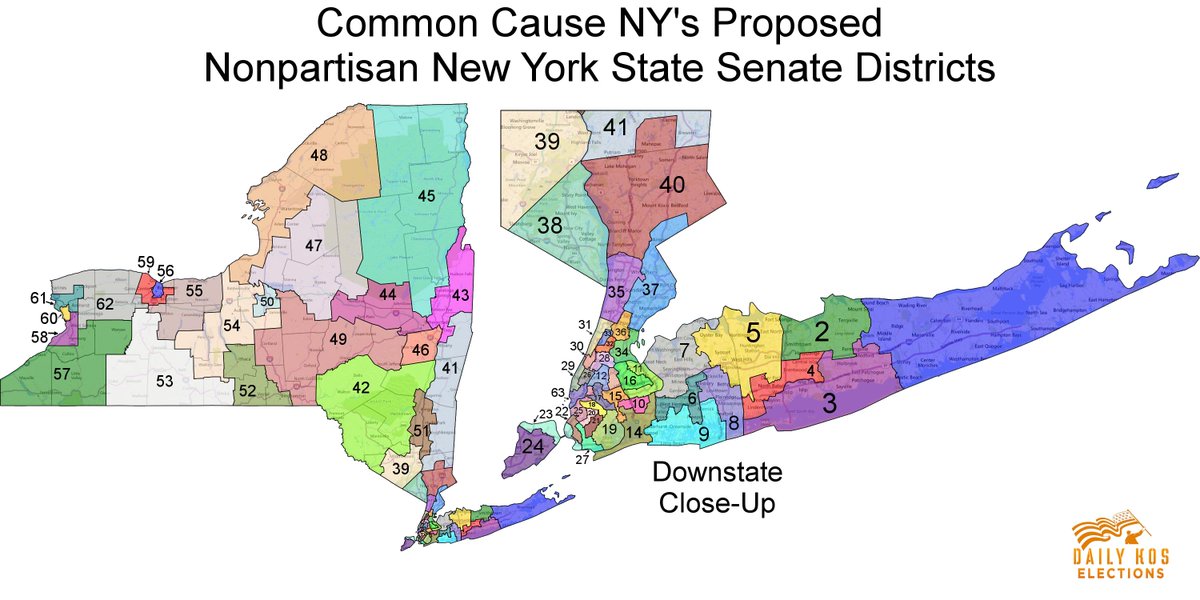 If you're looking for a data-driven deep dive into the impact of congressional gerrymandering, stay tuned. We're done calculating the partisan/demographic stats for scores of maps & are now working on graphics, interactives, & a whole lot of writing to explore their implications