So will a 'no deal' #Brexit turn Kent into a lorry park? Empty the supermarket shelves?

Been pondering this from a) political b) technical perspective...coz I think optics will be key to what happens after a 'no deal'.

So...after some chats, here's what can be said 1/Thread.

So first the "political" side of things - is there appetite on the EU side to put it foot hard on the British wind-pipe that is the Channel Tunnel?

The Dover-Calais strait is a small bore link with huge importance, as @DominicRaab belatedly realised /2

But ask around EU diplomats, as I have, and you don't hear enormous appetite for destruction.

The answer you get is mixed, but as I say, I don't hear French, Dutch, German, Belgians rubbing hands and warning of 'jamageddon'...as Sir Ivan Rogers has warned, they EU can play a longer game.

One key factor, of course, will be if the UK is agreeing to pay the bill /4

And if the UK is co-operating on Citizens Rights guarantees.

And if, in the end, 'no deal' becomes a kind of mutual admission of failure.

At that point the EU maybe doesn't want to seen as capricious, vicious etc. Avoid being the ogre of the piece /5

Of course, that may not be what a 'no deal' Prime Minister actually wants if they are going to fight a 'khaki' election...though of course, a 'no deal' doesn't axiomatically bring an election. Labour might well consider letting the Tories own the chaos, if that's what comes. /6

But before everyone gets all complacent & 'more project fear' what about the 'technical' side?

Because whatever happens the EU is going to HAVE to levy tariffs - even if it potentially has some discretion on the level of phytosanitary/SPS and other regulatory checks. /7

So here's where it gets interesting, because the EU has made preparations here.

The Dutch ports have built the software and truck handling system. It has hired 600+ staff. They are ready to rumble. /8

The Port of Calais has got ANPR systems to siphon off UK trucks, and 40 hectare lorry parks as @JamesERothwell reports here.

If the EU side is ready for seamless trade, with UK trucks facing delays/checks but siphoned safely off into lorry parks....what about the UK side?

This is that sunny picture starts to cloud over. /10

You remember this? The head of Calais Port Jean-Marc Puissesseau saying there will be no delays and all the Brexiteers saying 'told you so'.... well here's the problem with that... /11


As Richard Burnett @RHARichardB the chief executive of the Road Haulage Association tells me, there won't indeed be any delays at Calais, because British trucks/merchants who have not pre-registered all their consignments for customs/reg checks...WONT BE ALLOWED ON THE FERRY/12

"Jean-Marc has made it very clear that Calais has a deal with shipping companies in Dover that any truck without the proper paperwork won't be allowed to board....they have a deal on this. And that means those that don't will be turned around"....ruh-oh /13

At this point, it's not hard to see how Manston Airfield, or Operation Stack in Kent starts to be needed very quickly indeed....there is zero slack in the system on a good day.....trucks start showing up without the right paperwork and we're in trouble.

Well, let's look at the Dutch scenario...because they've made very clear WHAT UK businesses need to do to avoid backlogs/chaos etc. Take a read of this. /15 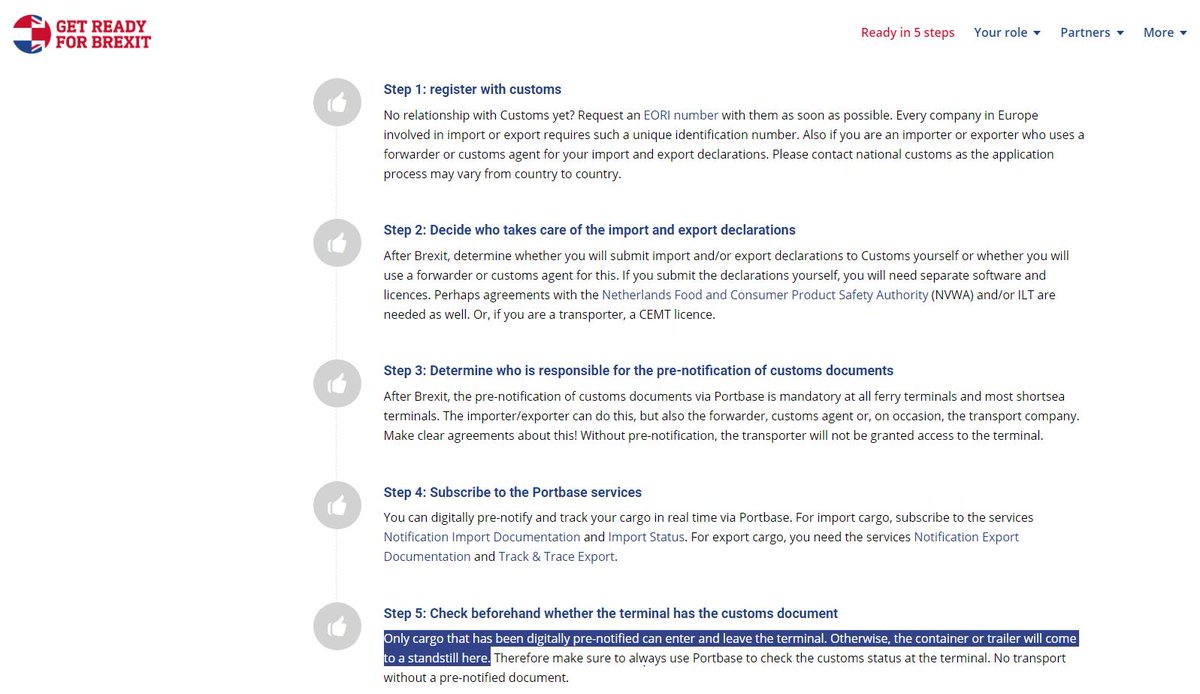 So to start with you need an EORI number.

How many business currently have one of those I asked @RHARichardB.

And if you're going to DIY, you need "separate software and licences" and "Perhaps agreements with the Netherlands Food and Consumer Product Safety Authority (NVWA) and/or ILT are needed as well. Or, if you are a transporter, a CEMT licence."

It speaks to the huge amount homework every business will need to do to make sure that it's particular products are compliant. Otherwise, they're getting stuck. Or they're not boarding the ferry at all.

But guess what, they're in massively short supply, since no-one wants to invest hugely in creating a customs agents business (potentially lucrative in a 'no deal')..if No Deal isn't going to happen.

Which brings us to the next issue, which @CBItweets keep going on about...there is so much uncertainty.

No deal is imminent one minute; never gonna happen the next.

So the cheery Dutch and French ports might be A-OK (and remember we're letting their stuff in mostly without checks, so their exports are fine) but the idea that UK business is all good to go for an October 31 no deal is for the birds. And it will be OUR fault, not the EU's. /21

One imagines that when PM Boris blaming those nasty Europeans for the backlog, they'll be pointing out all their waiting lines of customs offices, the shiny ANPR systems and lorry parks...all waiting to welcome (shhh delay) British exports. /22

Of course, the big players will be across all this stuff...so the supermarkets will get their hydroponically grown Dutch cucumbers, right??

Well....the issue there is not the big companies, it's the fact their trucks will have to use the same roads as the small ones. /23

Which means the risk that the UK haulage finds itself moving as fast as its slowest part....which might not be all that fast.

Those delays will also have a potentially huge knock-on effect for Irish truckers using the UK mainland as a 'landbridge' to the EU./24

Again, the EU has promised Irish trucks a 'flexipass' out of Calais (while the UK one's get stopped)....but that's from Calais.

They'll be waiting to board behind a long queue of others...there will not be an Irish express lane, I understand. /25

Industry groups think government will have to step in to boost things like customs agents, but on the EU side, there are concerns that if a 'no deal' happens it won't be taken really seriously until too late.

As my colleague Senay Boztas was told: /26

All of which makes me wonder, even if there is appetite on the EU side to soft-pedal a 'no deal' - just to get us out, it will still be a mess.

The risk is a British inability to manage its own 'managed' no deal. /27/ENDS

PS's on this thread, to add to the picture.

1) Am given to understand that HMRC have said they'll 'wave thru' trucks without an EORI customs number, so long as they promise to get one next time.

Also understand plan is for big food companies to divert to Hull and then - hilariously - drive down to sorting warehouses in Dover on different roads. So those cucumbers might be OK after all!! /29

The fear is not so much "No Deal +1" ...the no deal day is a Friday. Then there's a weekend. Fear is ND+7 as system creaks and backlog builds, then ND+21 when car/aerospace stockpiled parts inventory runs out....so a slower burn. /30