As we keep seeing more of these 'helpful' columns about beating Trump, let's be clear. Anyone who

is already voting for Trump. Dems should not pursue their votes.

Thanks for the input, Kurt. I'm sure you're just helping us defeat Trump, right?

Putting aside the many other problems, framing "people who voted for Obama and later Trump" as "ordinary voters" reflects a common erroneous assumption by columnists: that a Dem nominee can only succeed by winning back Obama->Trump voters. /1

So how many people voted Obama->Trump? @geoffreyvs found 11-13% of Obama's 2012 vote, based on early survey data. @SeanMcElwee later looked at the validated data and found 9%. 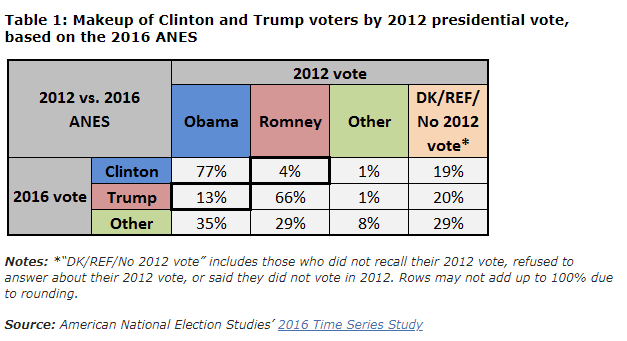 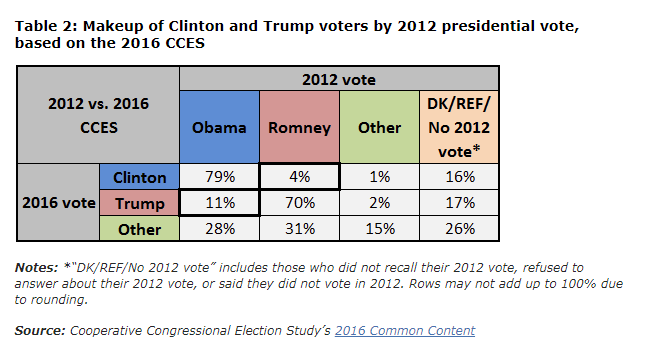 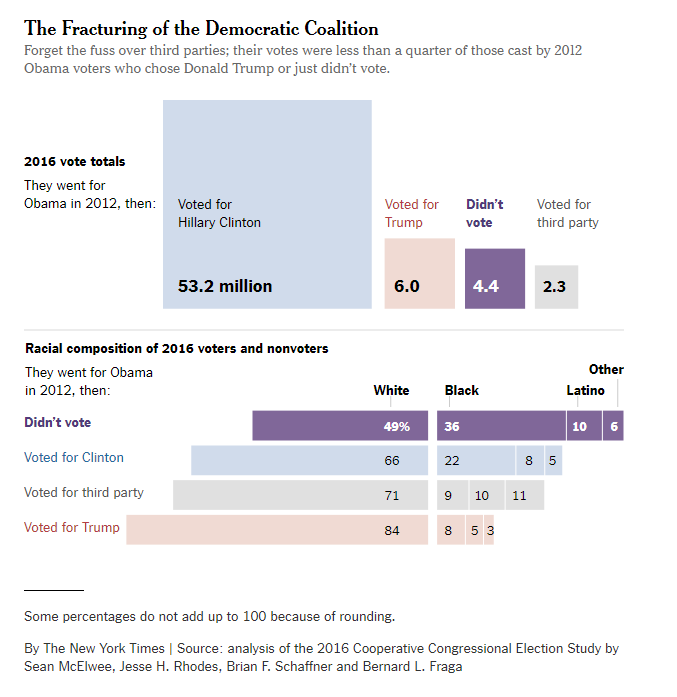 Links here if you want to read them:

Given the razor-thin margins, Clinton could've easily won without a single Obama->Trump voter, if she'd had some fraction (perhaps 1/3) of Obama->no-vote or Obama->third-party voters. 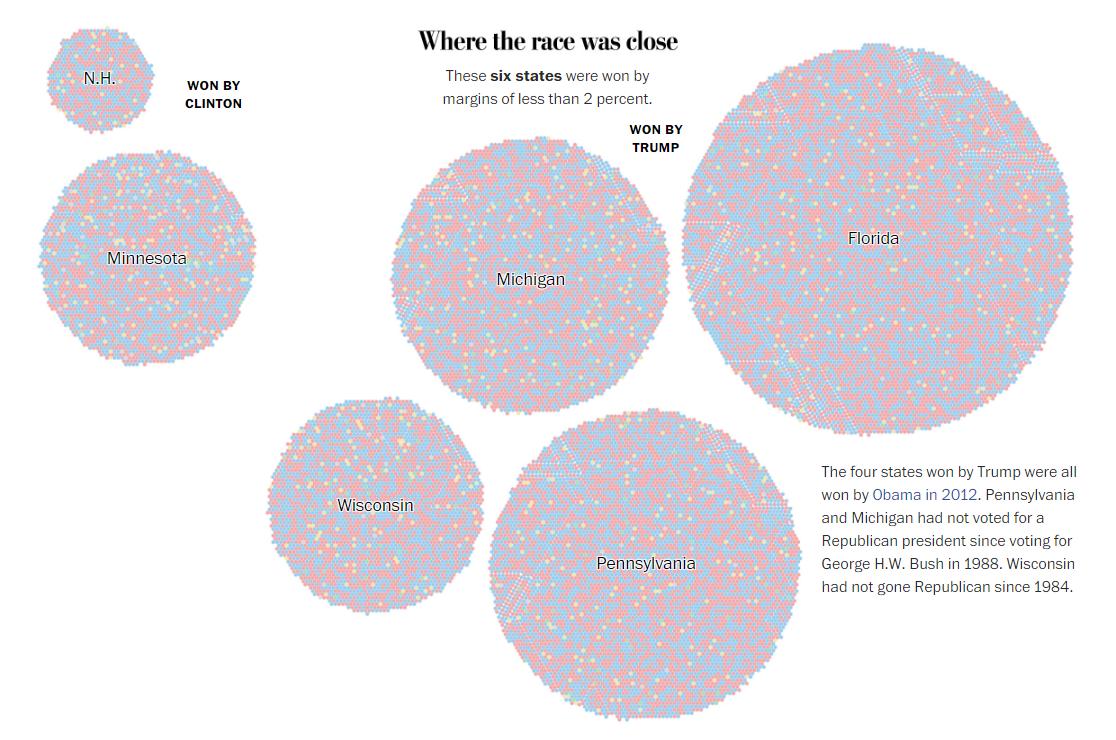 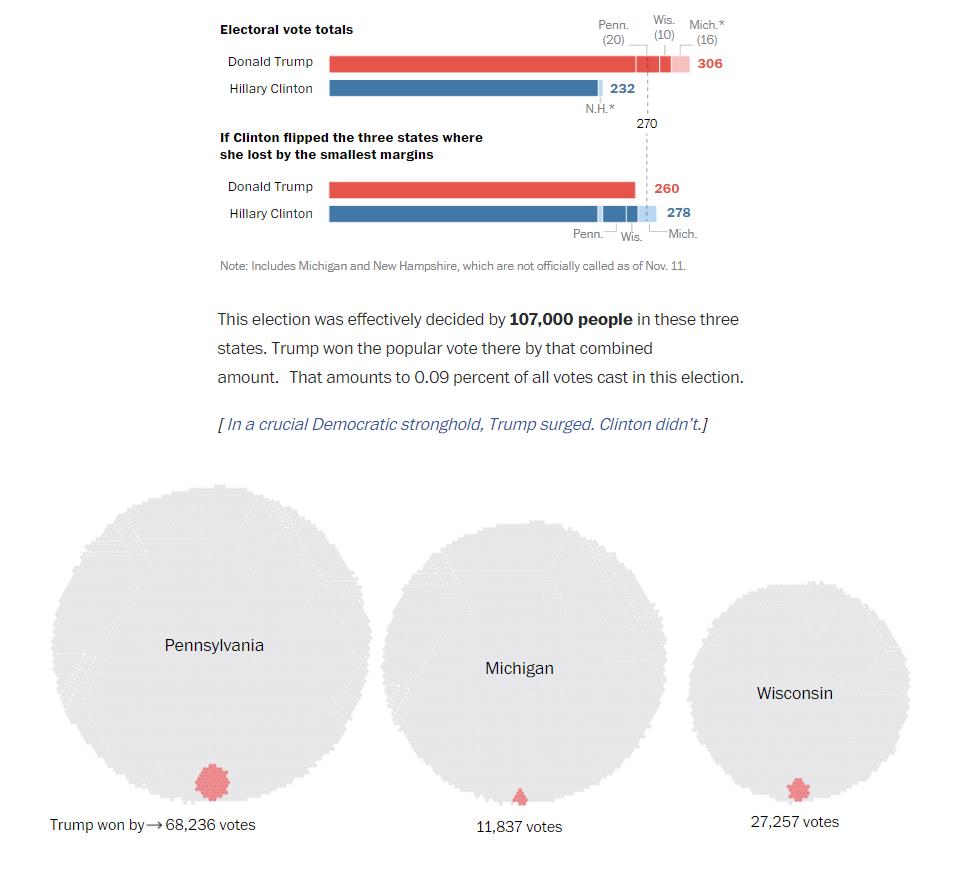 As @pbump pointed out, other than gender, almost any way you slice the data--party, age, race, income, religion--shows that Trump's victory wasn't because of switched votes, but because Dem-leaning groups didn't vote as much as GOP-leaning groups:  https://www.washingtonpost.com/news/politics/wp/2018/08/09/new-data-makes-it-clear-nonvoters-handed-trump-the-presidency/?utm_term=.6c0a1fbefefe …
/4 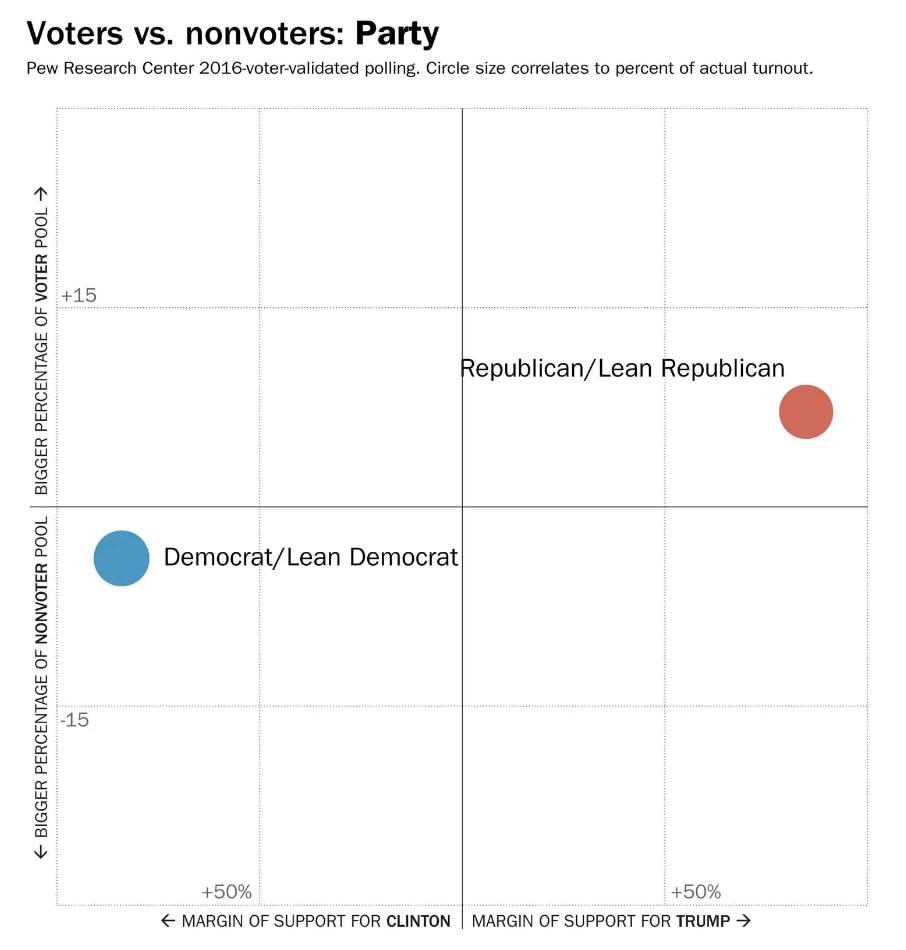 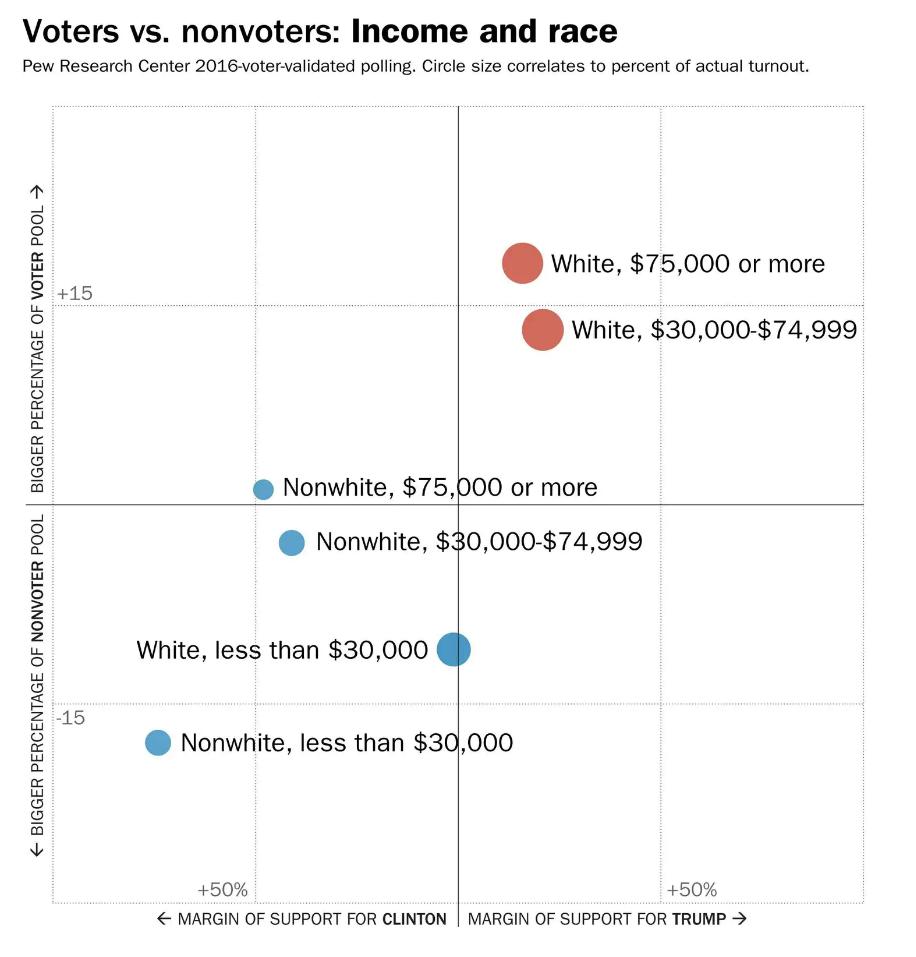 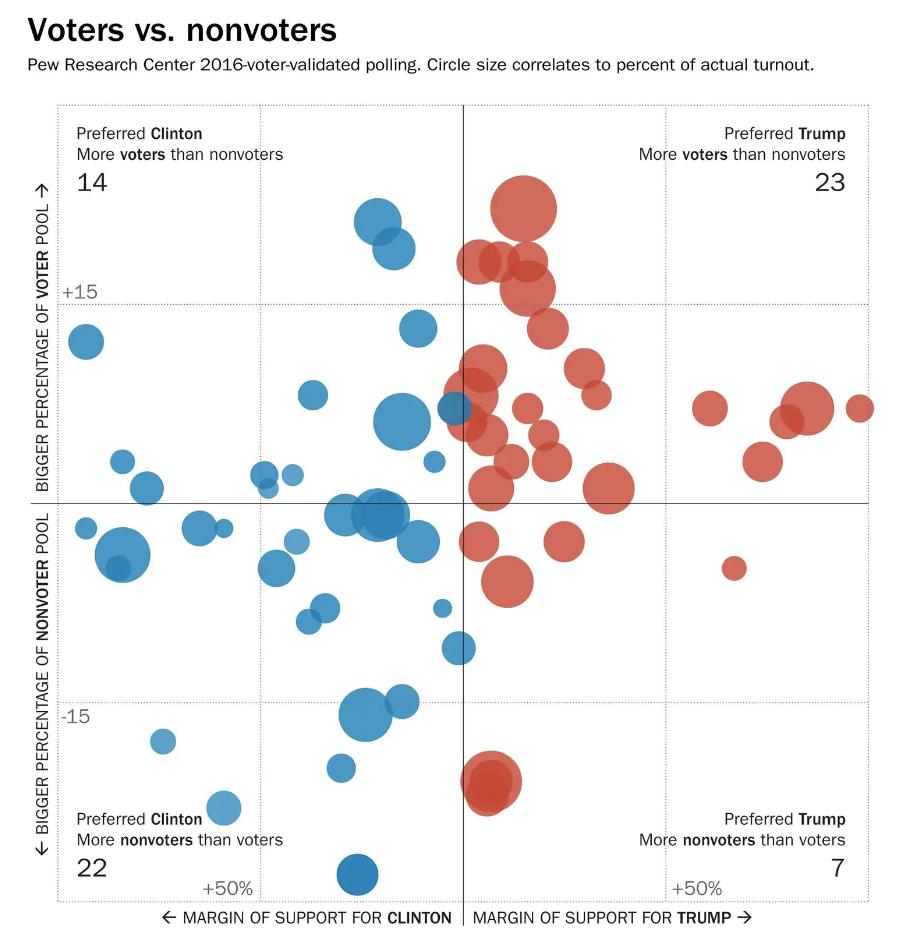 More to the point, how many Obama->Trump might really vote for *any* Dem in 2020? Their two biggest complaints were about Obamacare and immigration. A Dem could only get them by taking positions wildly out of step with their party, and out of step with the public in general. /5 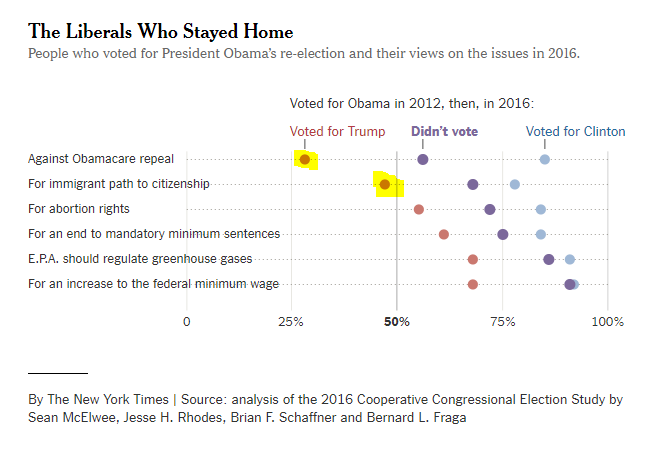 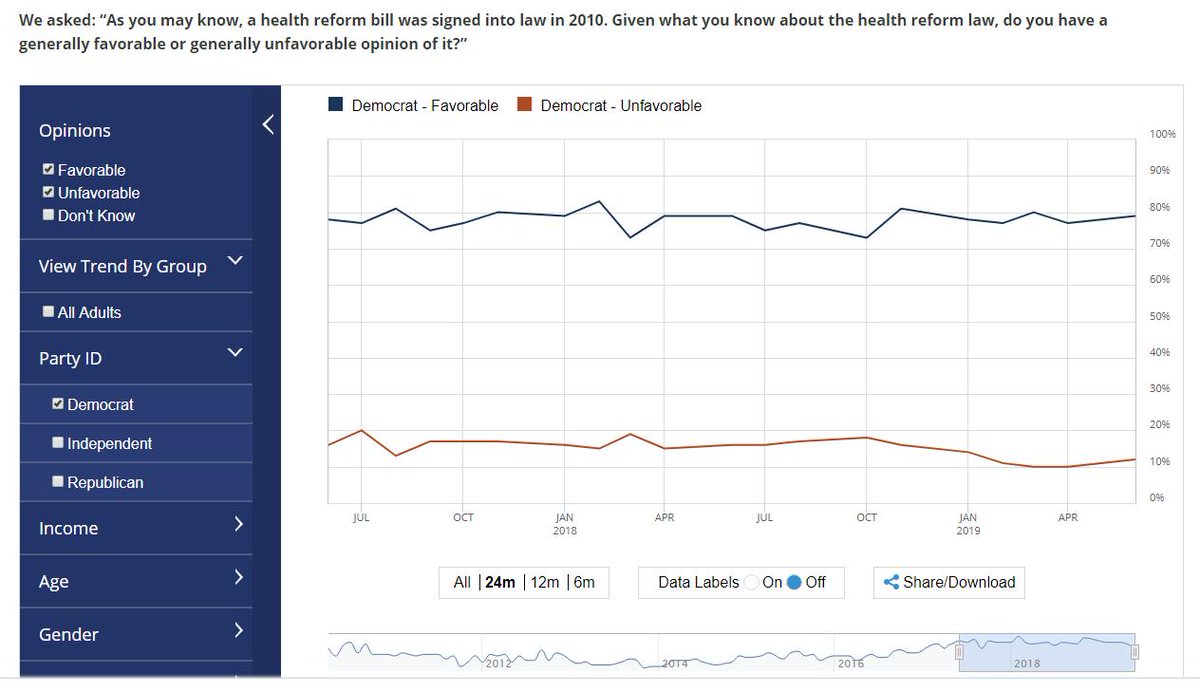 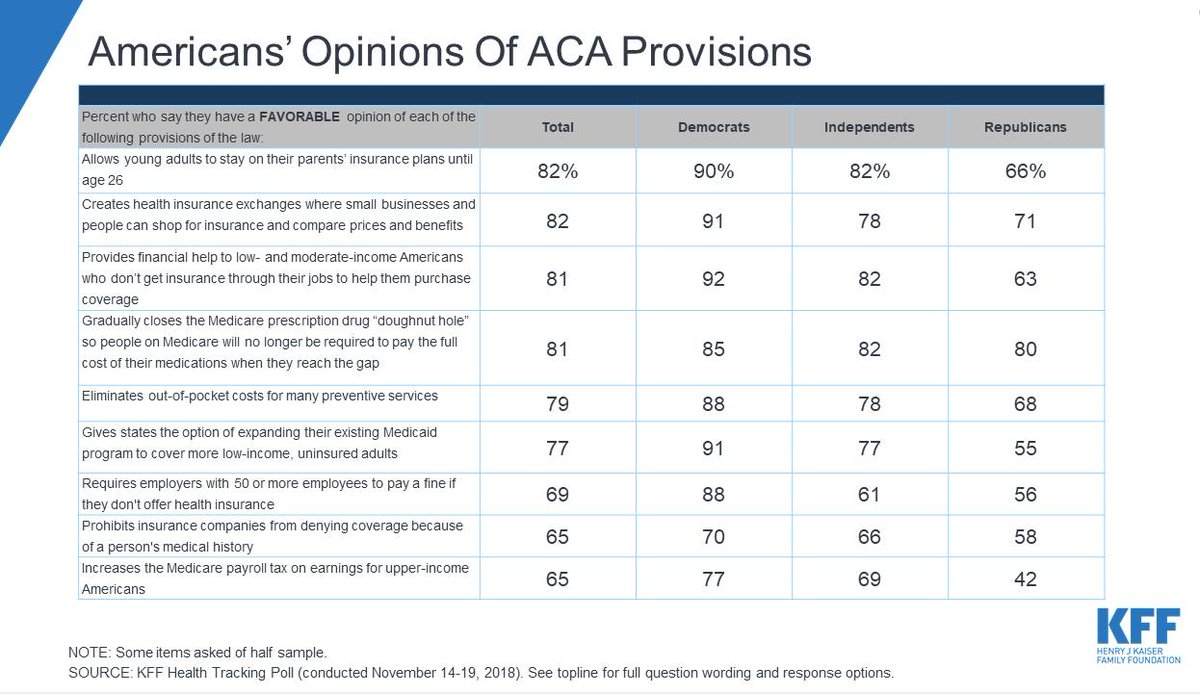 Conventional wisdom is that Trump voters are entrenched, and polls show the same. But conservative columnists pretend Obama->Trump voters aren't dug in and could be brought back by centrist messaging.

They can't, not without repealing Obamacare and attacking immigrants.
/6 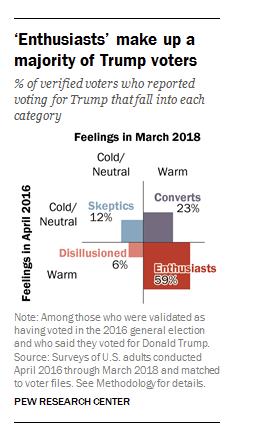 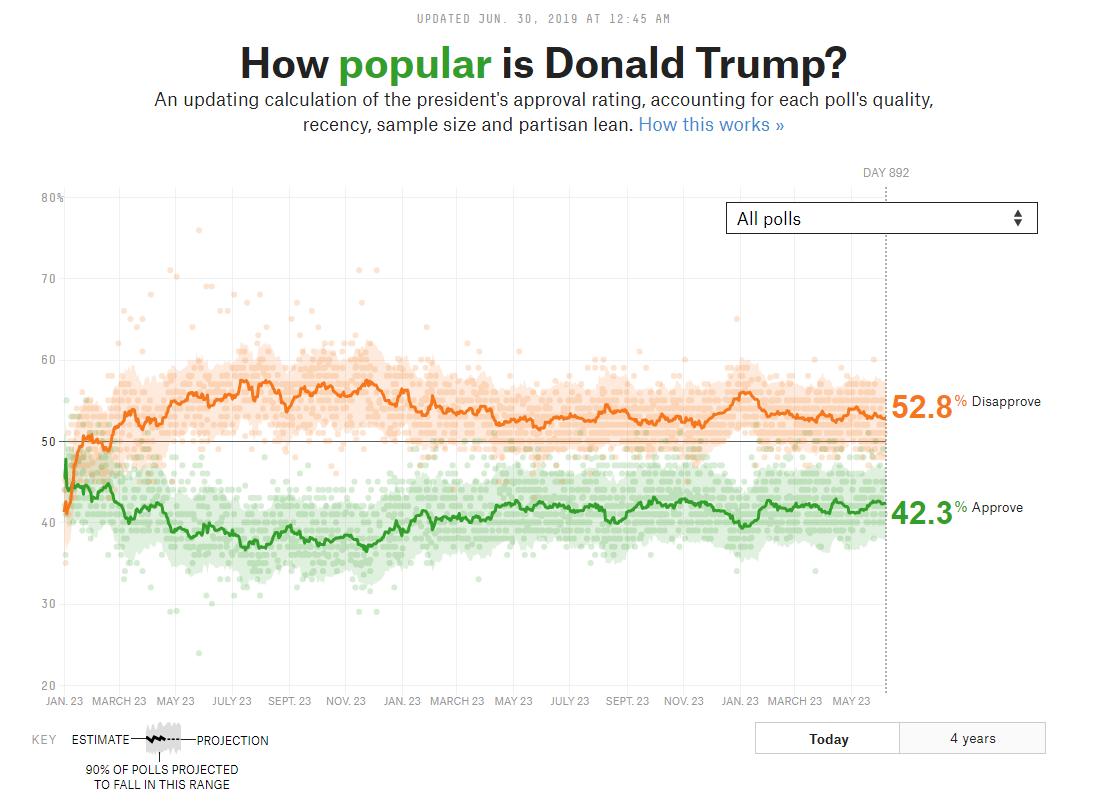 If columnists were correct, pitting Trump against a moderate Dem would cost him tons of support as compared to a socialist--but it doesn't. Trump's support is the same.

In the minds of Obama->Trump voters, Biden and Sanders are both for open-borders and socialized medicine.
/7

So don't bother with Obama->Trump voters. Nothing any Dem says could reliably convince them to switch. Instead, aim to keep Clinton 2016 voters and get back Obama 2012 voters who didn't vote in 2016. That by itself would win, with the upside of adding some unlikely voters. /8 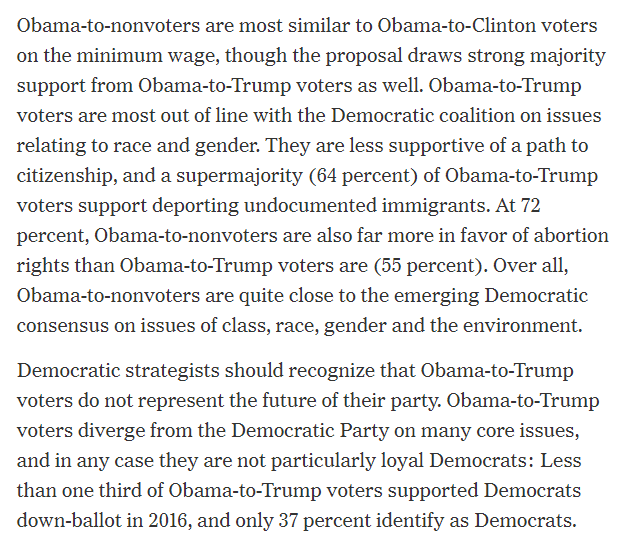 Courting Obama->Trump voters isn't just difficult, it has limited upside and a potential to lose some of the Dem base.

But courting Obama 2012->no-vote voters could work, keeps the base, and has upside potential among the millions of unlikely voters.  https://www.suffolk.edu/academics/research-at-suffolk/political-research-center/polls/unlikely-voter-polls … /9 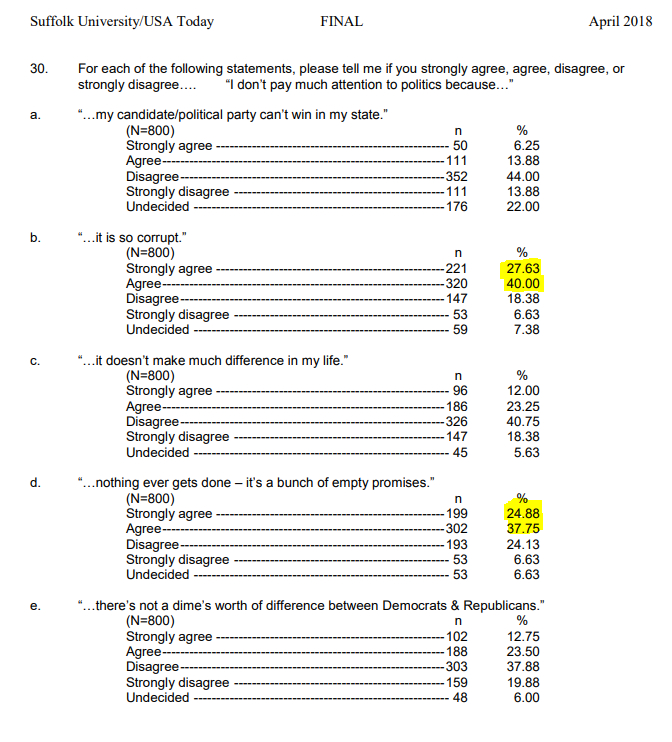 In sum, it's pointless and counterproductive to try to win back Obama->Trump voters. Few could be courted by any Dem, and only at the expense of base votes--the reason we lost in 2016.

We don't need them. We need just a small fraction of the far-larger disillusioned left.
/end

I get the argument, but I don't think the polling or validated voter data supports it. As discussed in the thread above, Trump voters are locked in, including Obama->Trump voters. A Dem wins by getting Obama->no-vote voters -- including in the Rust Belt.

Another example why Dems shouldn't pursue reflexive centrism. This guy's "center" is single-issue anti-abortion. He wrote a whole column that he can't support Biden because of the Hyde Amendment. Courting voters like him is useless and counterproductive.

Citing data to David Brooks is like making a PowerPoint for a tree, but there's a real question here--is he saying the Nordic model is the new "moderate" position? That'd be great. Or does he limit that to the fake version of the Nordic model in his head?

But that's why Dems should not try to win them back. Can't get them without losing the base.

Instead, aim for the larger Obama->no-vote/third-party group. Just a fraction of them would've won 2016.