Eric Garland+ Your Authors @ericgarland Intelligence analyst and advisor to CEOs and governments. I break down global events into clear narratives and appropriate profanity. Jul. 01, 2019 3 min read + Your Authors

<THREAD> A NEW DECLARATION OF INDEPENDENCE

When in the course of human events, it becomes necessary for one nation to remove from office a cabal of corrupt traitors, a decent respect to the opinions of all its citizens requires that they should declare their just reasons. 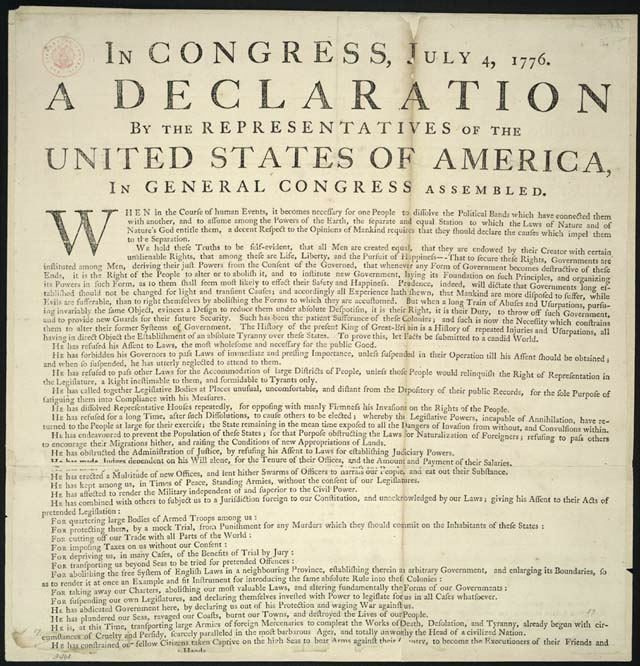 We hold these truths to be self-evident, that all Americans are created equal, that they are endowed by the United States Constitution to many unalienable rights such as freedom of speech, freedom from slavery, equal treatment under the law, and much more.

To secure these rights, Governments are instituted among citizens, deriving their just powers from the consent of the governed.

Whenever any form of government becomes destructive of these ends, it is the right of the people to alter or abolish it through free, fair elections.

But when a long train of abuses is committed by elected officials and their political appointees with the end of violating the freedoms and rights of Americans - with the end of establishing Tyranny - it is Americans' duty to throw off that Government to safeguard the future.

Such has been the patient sufferance of Americans, and the rule of law must be re-established at once.

THE HISTORY OF PRESIDENT DONALD TRUMP IS ONE OF REPEATED INJURIES AND USURPATIONS ALL WITH THE GOAL OF ESTABLISHING A TYRANNICAL OLIGARCHY IN THESE UNITED STATES.

To prove this, let facts be submitted to a candid world:

Trump and his confederates have flouted America's laws, the most wholesome and necessary for the public good.

He has placed conspirators and family members in positions of power where they have no skills and bad intent.

He has obstructed justice, appointing attorneys general he believes will protect him and his confederates from answering to the Law, and fired those most sincerely committed to jurisprudence in the most brazen fashion.

His political party has sought to restrict voting rights for large districts of people, denying them their right to Representation in the Legislature and State Houses and the White House, an end formidable to tyrants alone.

He has welcomed the praise of murderous foreign dictators and insulted the allies most important to our mutual safety, those who have bled with us and for us in many wars.

He has echoed the propaganda of those dictators, supported extremists, and eschewed American values.

He has failed to protect citizens of Puerto Rico from death and destruction when America had ample resources to do so - and lied about the results of his cruel failures.

He has besmirched America's reputation as a haven for immigrants by employing the cruelest policies.

He has used the powers of his office to enrich himself, his family members, and his confederates at the expense of the honest services due to all Americans.

He has cut off trade with many partners serving only to cause chaos in America's economy.

Most heinously, his very election as President was supported by an avowed enemy of this nation with whom he conspired - and has disgustingly stated that he intends to do so in the future, with the help of many foreign nations if he so chooses.

In every stage of these Oppressions, we have petitioned for redress in the most humble terms, choosing the rule of law over public insurrection at every turn. We have relied on the Department of Justice and Congress over general strikes.

These petitions have only been answered by repeated injuries. A President whose character is thus marked by every act which may define a Tyrant IS UNFIT TO BE THE COMMANDER IN CHIEF OF THE UNITED STATES.

We, therefore, the Citizens of these United States of America, solemnly publish and declare, that this nation ought to be governed once more by loyal, worthy public servants elected without the help of foreign enemies.

We declare that all connection between Donald John Trump, his family, his confederates, and this Republic ought be totally dissolved - that he should be impeached, removed from office, and that all those who betrayed the Nation face the full measure of Justice.

And for the support of this Declaration, with a firm reliance on the protection of the Rule of Law, we mutually pledge to each other our Lives, our Fortunes, and our sacred Honor.

Signed,
Eric Garland
And All Other Patriots Who Would Sign