(Thread) Susan B. Anthony taught us how

I’ve argued that MAGA means “Take America Back to the days of robber Barrons & white male supremacy.” If you missed it, see👇


The question I get is: “What if the Fox-Trump-GOP succeeds in rolling us backwards?”

1/ Answer: We need to do the work of rolling everything forward again.

Facts and sources from my own book 👇

When SBA was born, slavery was legal.
A woman not enslaved had no identity separate from her husband.
Wife-beating was legal. 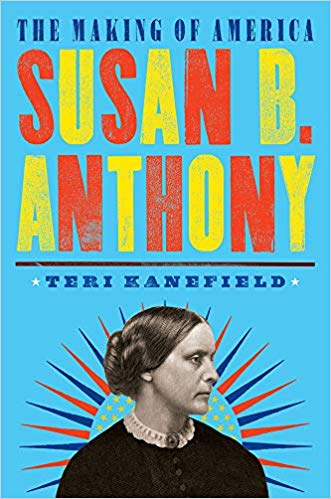 2/ The law of the land was called coverture.  https://www.britannica.com/topic/coverture
Divorce wasn’t an option.
A woman couldn’t own property or enter contracts.

A woman was considered incompetent to testify in court.
A few low paid professions—like factory or domestic work—were open to her.

3/ Only the daughters of the wealthy were taught to read.

A man, on just his word, could have his wife committed to an asylum. Women who were “difficult “and refused to be subservient often found themselves locked in asylums.

SBA was educated at home, and become a teacher.

4/ Her family were Quakers and held the view considered outlandish and radical at the time that all people were equal. (Quakers educated their daughters)

Her father lost his small textile factory in the economic crash of 1837. Eventually he became a farmer. At 28, SBA . . .

5/ . . left teaching to help her parents establish their farm. When the farm was established, her parents supported her work as a political activist. (The word then was "reformer.")

SBA was an abolitionist, but is better known for her work on behalf of women’s rights.

6/ She traveled, gave lectures, and created organizations that allowed for the collecting of signatures for petitions.'
She was widely mocked, called a bitter Old Maid. She had things thrown at her. Her life was threatened when she spoke out against slavery.
She marched on.

She knocked on doors & talked to women about their rights.
Many told her they didn't want equal rights and slammed doors in her face.
In her words, she'd “embarked on an unpopular case and must be content to row upstream.”

8/ She told herself she was working, not for her contemporaries, many of whom would never appreciate her work, but for “future generations we must labor.”

Eventually she and E. Cady Stanton had a newspaper, which allowed them to reach a wider audience.

9/ They worked to change the laws. They couldn't vote so they found ways to pressure elected representatives.

Occasionally, after making progress (like getting the NY law changed so women could own property) another group of lawmakers would undo their progress. . .

As a result of her work, women gained the right to speak in public. She worked to get women accepted to colleges.

Women’s colleges were founded and became centers for women’s activism.

11/ By the end of her life, women in in abusive marriage could obtain divorce, and there was a nationwide (and international) women’s organization fighting for suffrage.

She didn’t live to see the passage of the 19th Amendment.

As an elderly woman, she wrote this:

12/ "Oh, if I could live another century and see the fruition of all the work for women!"

She trained young women in the organization to take over the work after her death. She called them her nieces. They called her Aunt Susan.

SBA was up against white male supremacy, and the autocratic world view that some people are entitled to dominate others.

He’d like to take us back 150 years, but he can’t. He’s facing too much resistance. The checks and balances and bureaucracy naturally created by liberal democracy means that change happens slowly.

If you find yourself paralyzed by shock and outrage, it’s because you bought into a myth that goes like this: history is a river and you don’t have to paddle. The stream will simply carry you forward to a better, more democratic world.

16/ Put another way: We inherited the democracy created by the hard work of people like SBA. People who inherit things often think they are entitled to it.
If someone tries to take it away all we can do is moan.

17/ People with anti-democratic tendencies will always be with us.
We push forward, and they push back.

Each generation will have to fight the same battle, but it's a little easier today because we have advantages and tools the activists of previous generations didn't have.

18/ Democracy is hard work. It requires compromise and give and take.
Rule of Law creates bureaucracy and never works perfectly, so it's easy for people to get discouraged.
Checks and balances mean that change happens slowly.
It can be frustrating . . .

If everyone who is outraged and angry turns turn their rage into constructive action, we’ll get through this.

Want to know where to start? Check out my list👇  https://terikanefield-blog.com/things-to-do/

In March of 1867, SBA was thrilled when more than 9,000 Kansas voters were for women's suffrage (it wasn't enough. Women weren't given the vote).

All my threads are also blog posts. You can read this one here:  https://terikanefield-blog.com/susan-b-anthony-taught-us-how/ …

Yeah. Me too.
I cried writing the ending of my book.

When you write a biography of someone, you feel like you know the person.

. . . almost 3 million more than the guy running against her.

And that the guy cheated.

I don't know what she'd say, but I can tell you it would be biting and quotable :)