Janelle Shane+ Your Authors @JanelleCShane I blog at aiweirdness.com/. My book "You Look Like a Thing and I Love You" is out Nov 5th! Research Scientist in optics. she/her. wandering.shop/@janellecshane Jul. 06, 2019 3 min read + Your Authors

Ravelry folks! In particular, crocheters! I have my first neural net-generated patterns posted to the LSG HAT3000 thread.
Did it work? I have no idea. Some of the crochet notation in the dataset is VERY old, and it's not consistent at all. The results look like patterns maybe? 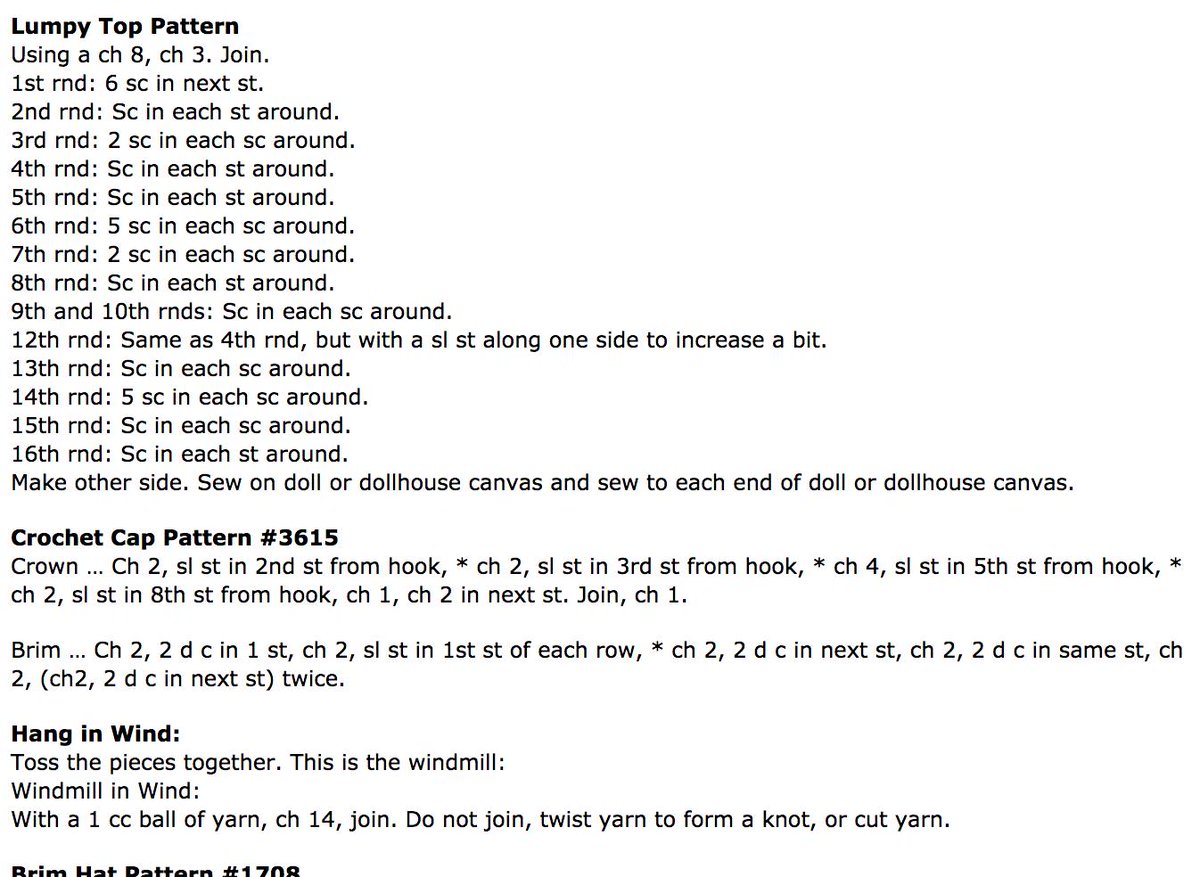 Here's another batch sampled from the same model, but with the top_k truncation set to 0 instead of 40. This allows the model to use lower-probability predictions. They are noticeably lower-probability. 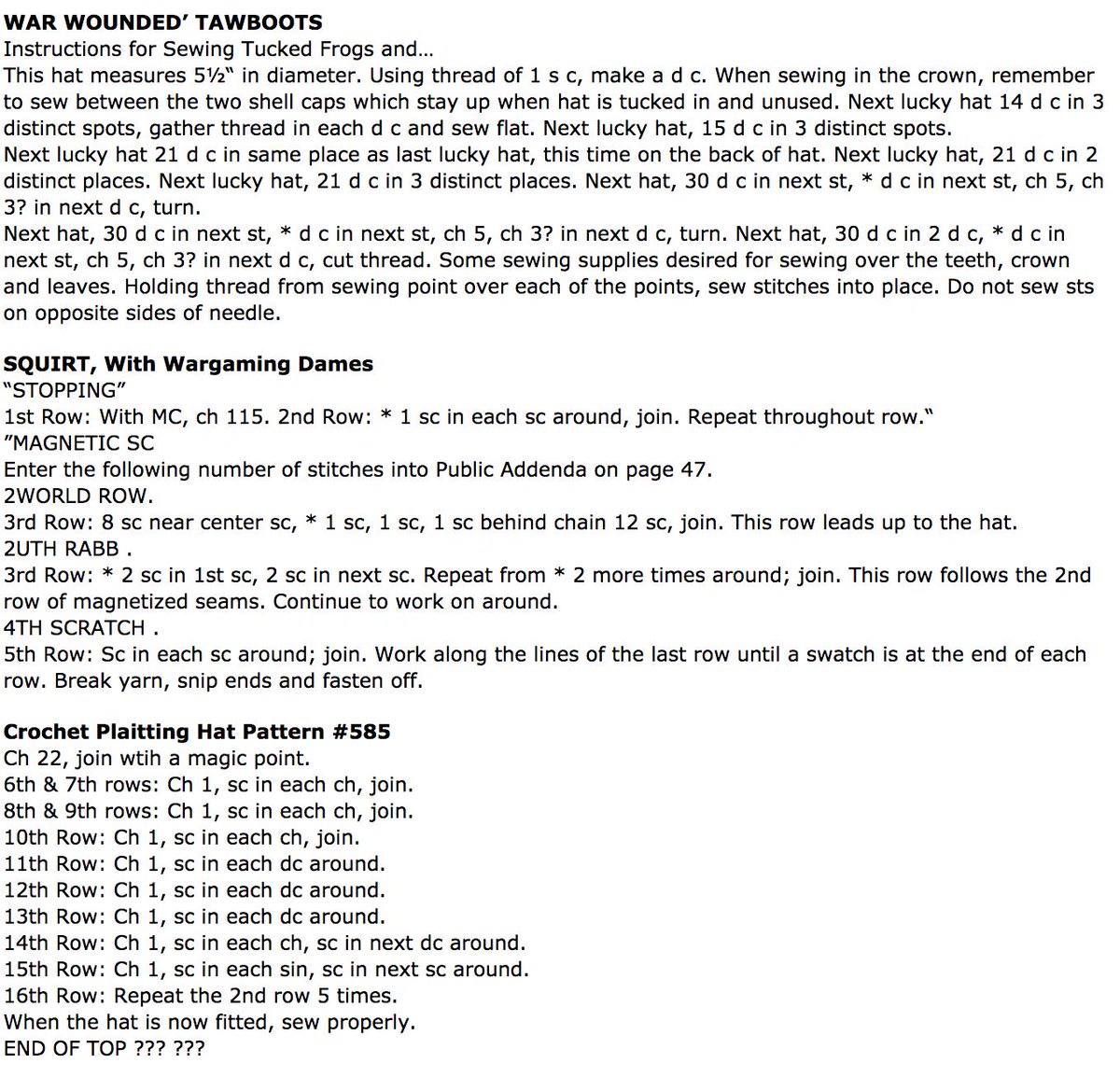 It’s Hang in Wind! Humans cannot comprehend what it does. 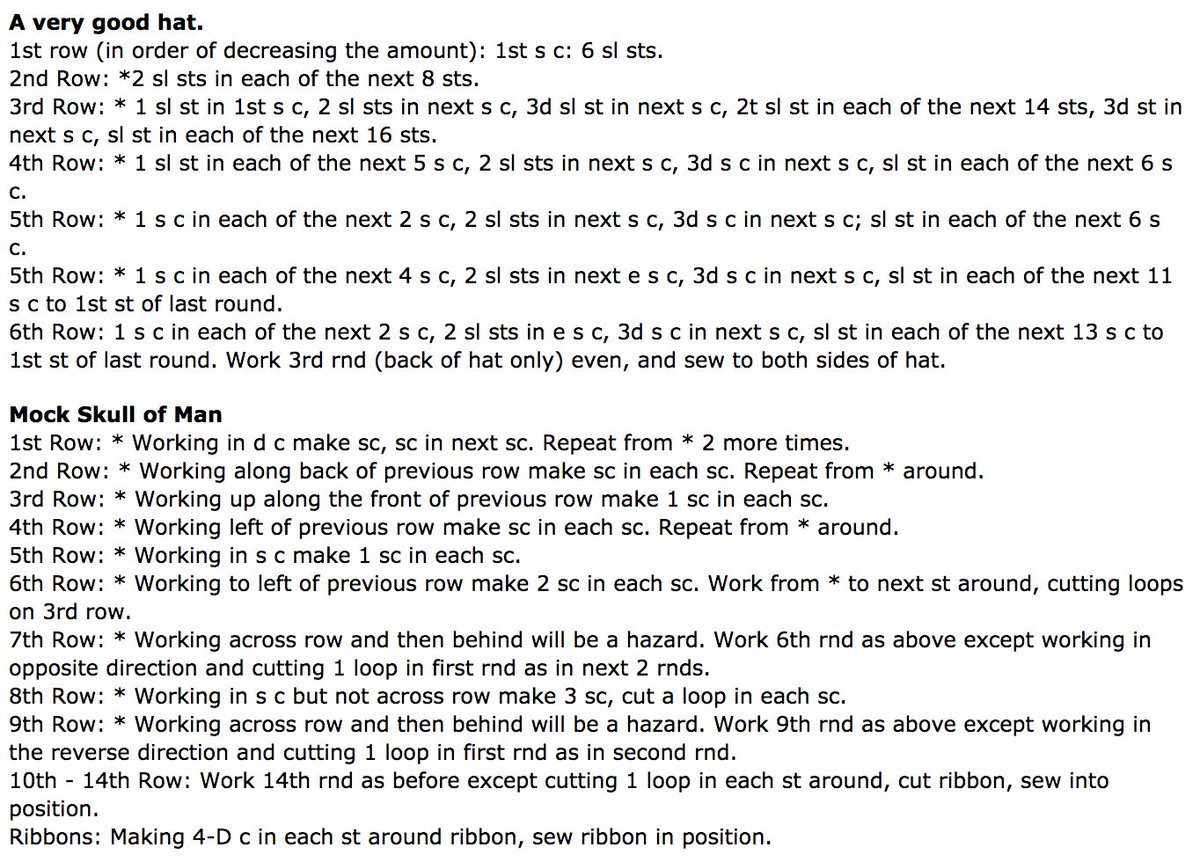 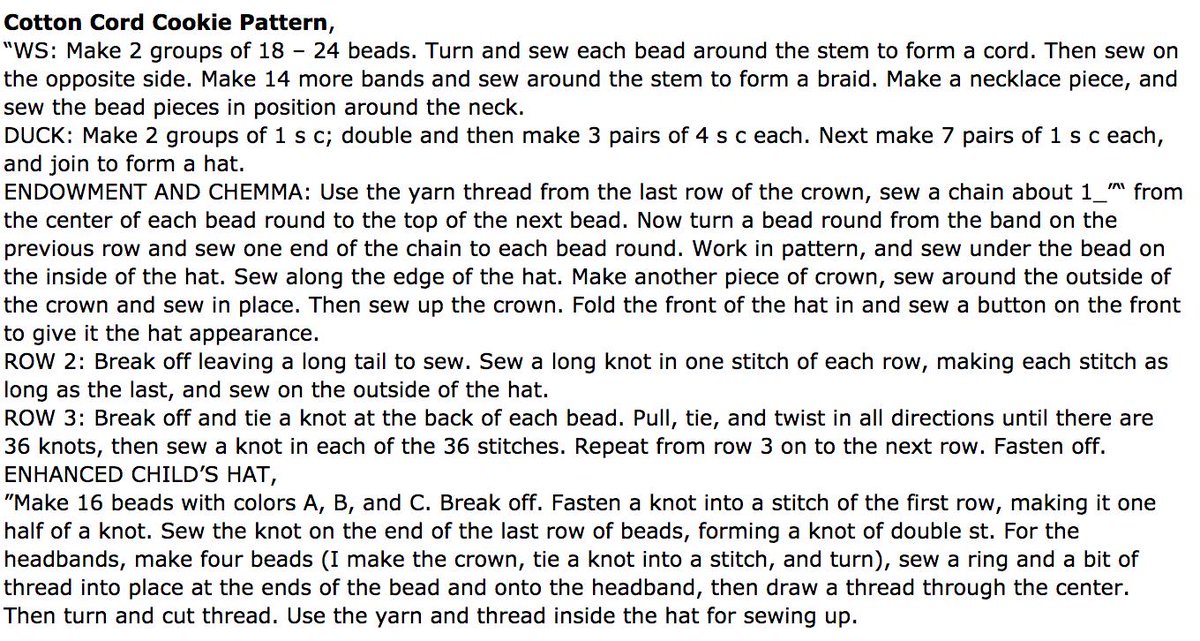 If I don't give it a specific prompt, sometimes the neural net starts generating things that it remembers from its original training. I love its recovery method: twist the conversation back toward crochet hats.

I’m not kidding about the all-conversations-lead-to-crochet-hats thing either. My prompt is the bit in bold. The neural net did the rest. 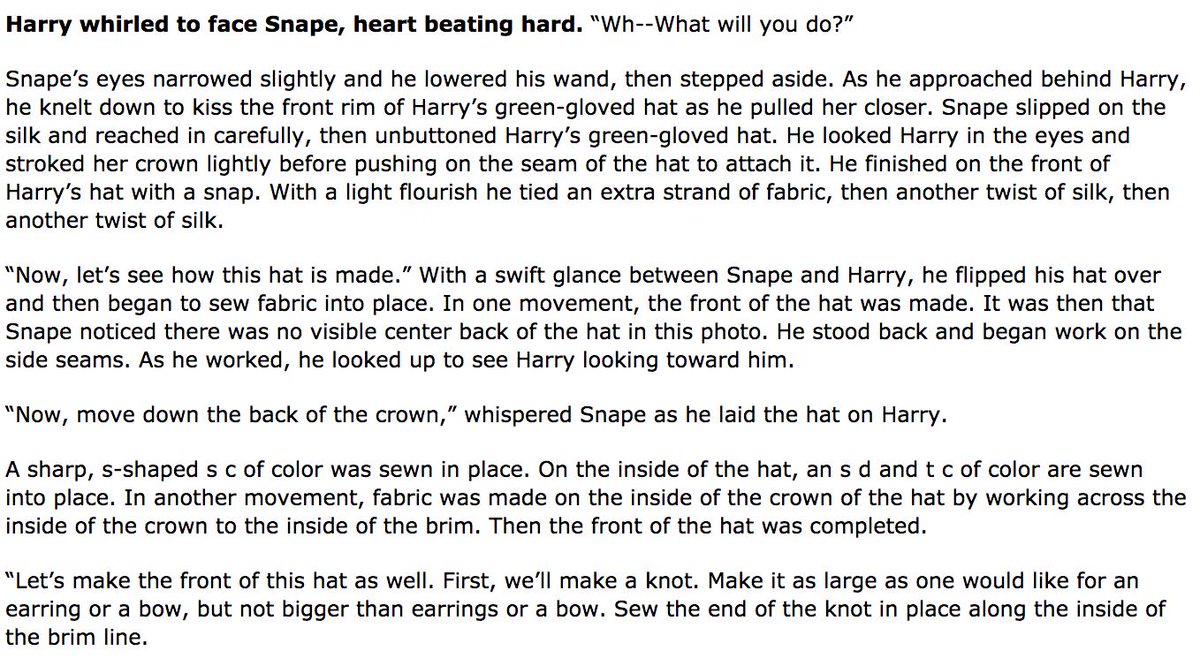 And if you can wear Crochet Cap Pattern #3615, you are already lost to the mortal realms

Here are some more hats from truncation top_k=60. I suspect that some of these don't result in hats? I probably should add more truncation to rein in the creativity a bit, but I'm enjoying these names so much. 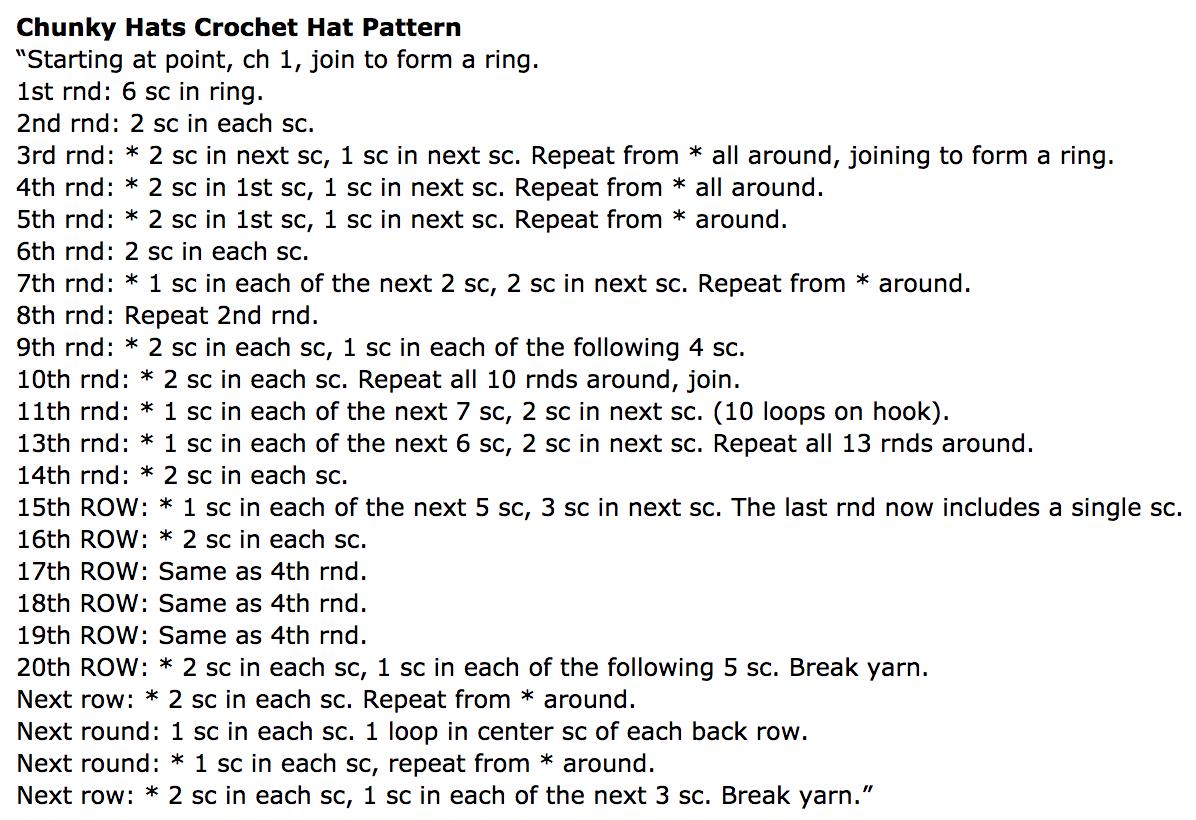 Why do all the neural net's hats end up ballooning into universe-devouring monstrosities?

Decided to try a new method for inducing the neural net to generate interesting pattern titles: a conservative k=40 truncation but prompted with the phrase "Lord Vader!"

Had the desired effect on the titles, as well as unintended effects on some of the patterns themselves. 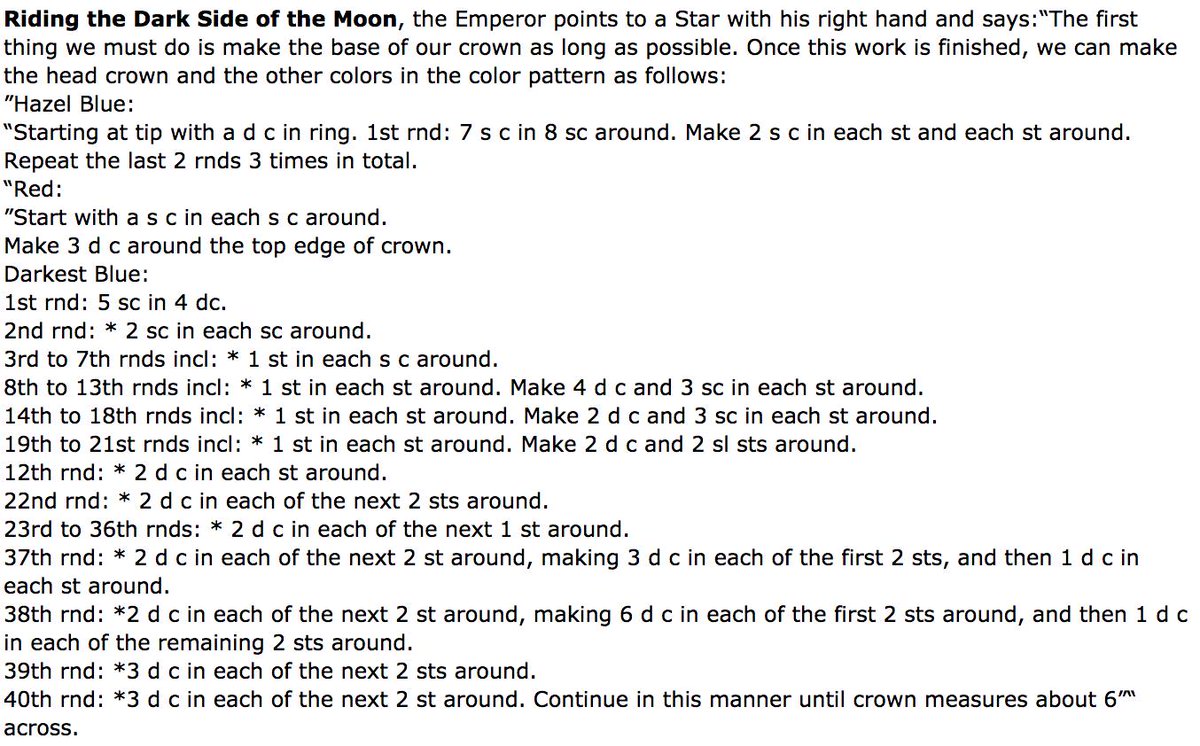 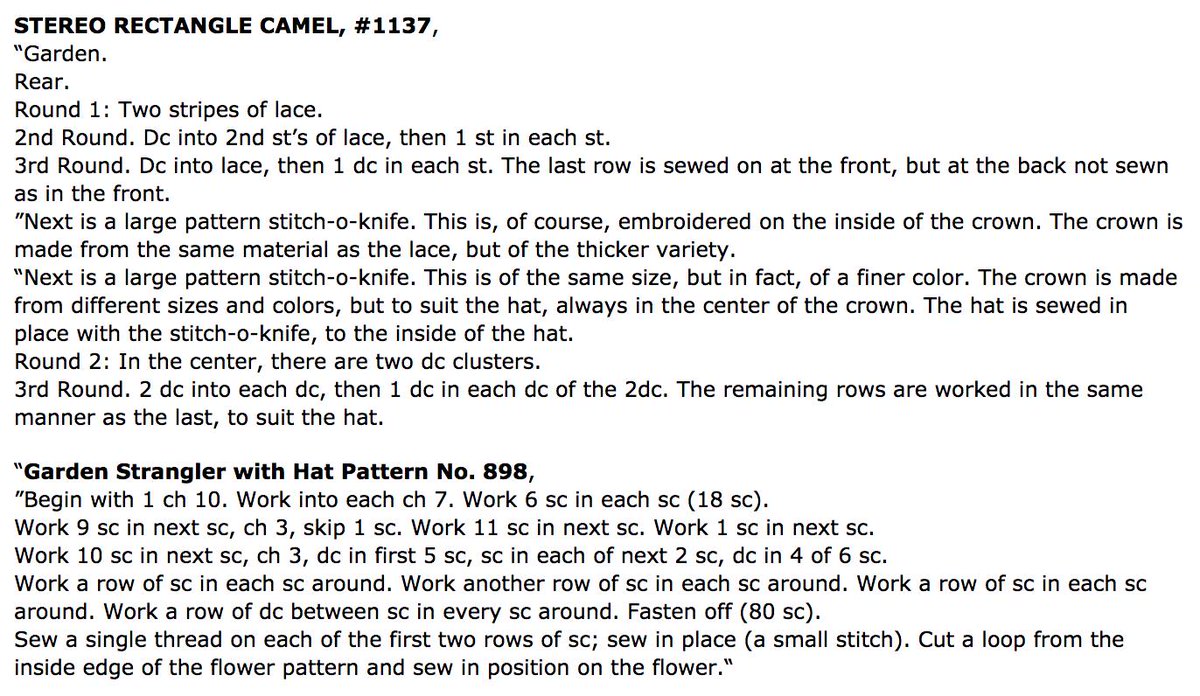 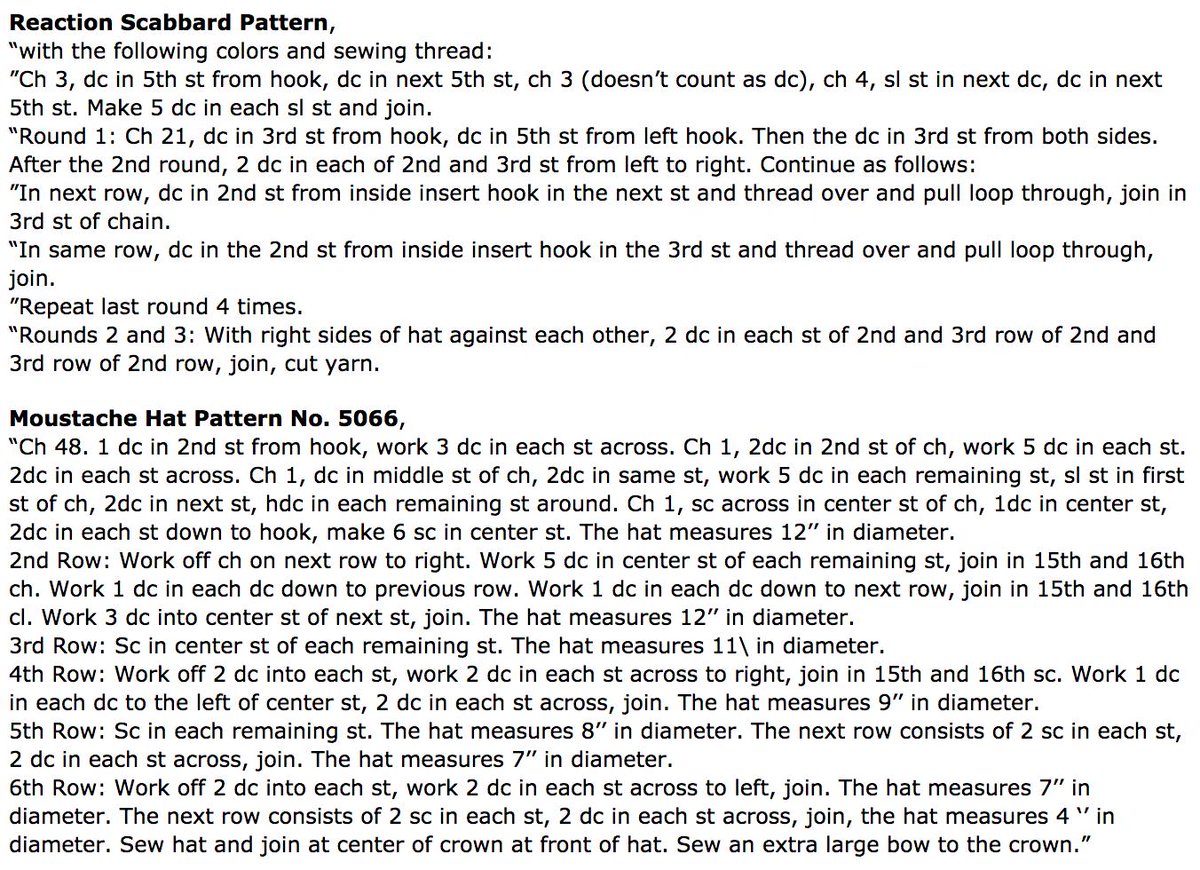 oh no it's going to be space-devouring hyperbolic ripples again, isn't it?
all of these patterns seem to be traps

tried to avoid hyperbolic chaos by reducing the sampling temperature from 1.0 to 0.8.
now the neural net is playing it safer (arguably TOO safe in those 1st two patterns), but is it still going hyperbolic? 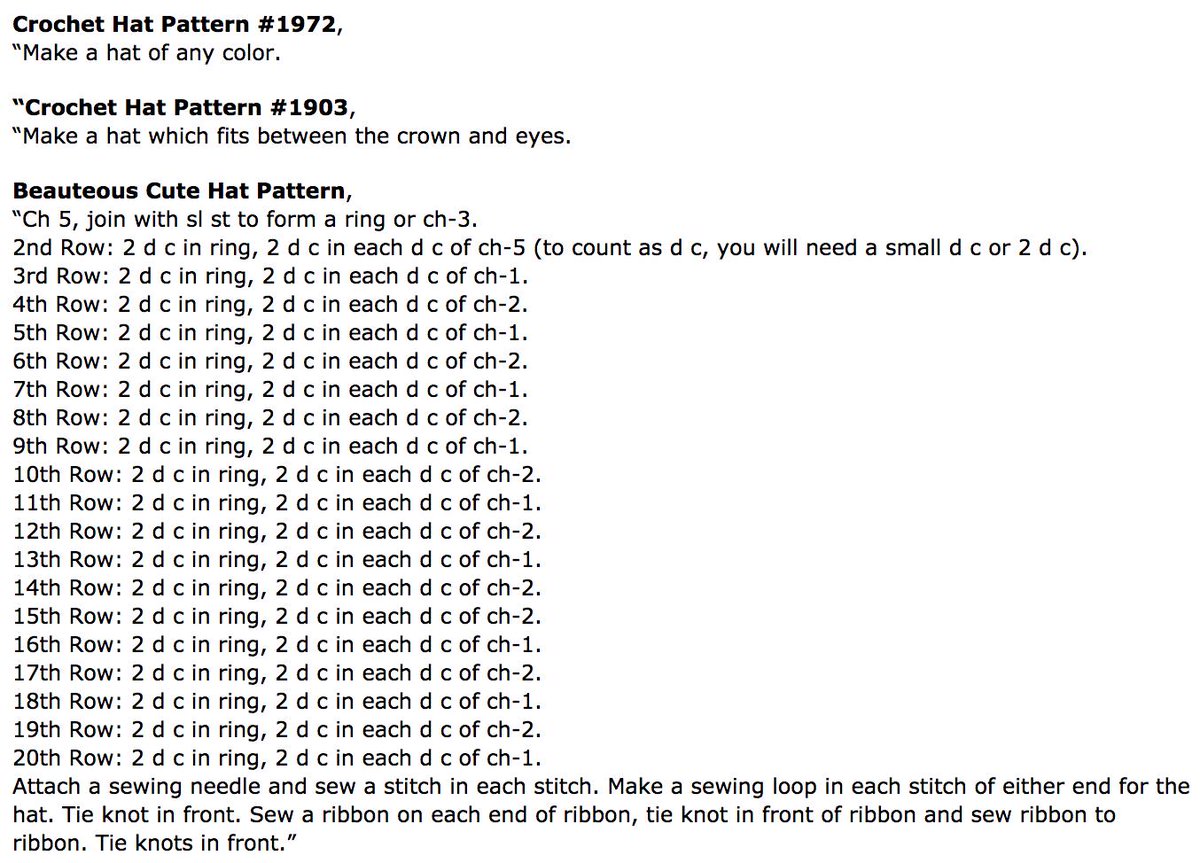 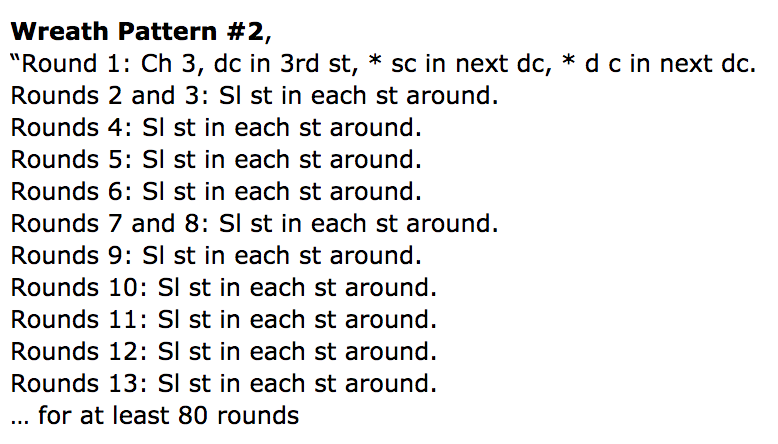 Update: these patterns totally are going hyperbolic. If anything, faster.

I trained HAT3000 for another 85 iterations to see if it might be able to fix its explodey hat problem. (here sampled with temperature 1.0, top_k 60, prompt text eccentric)
The one called "The End..." looks dangerous even to me. 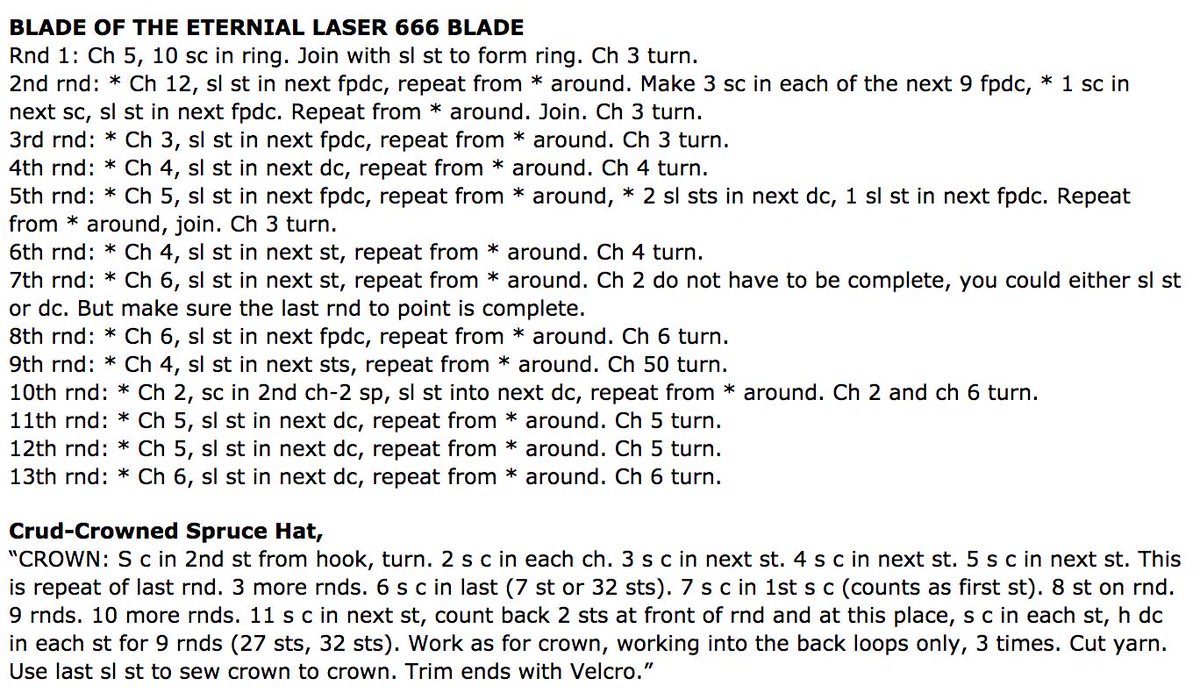 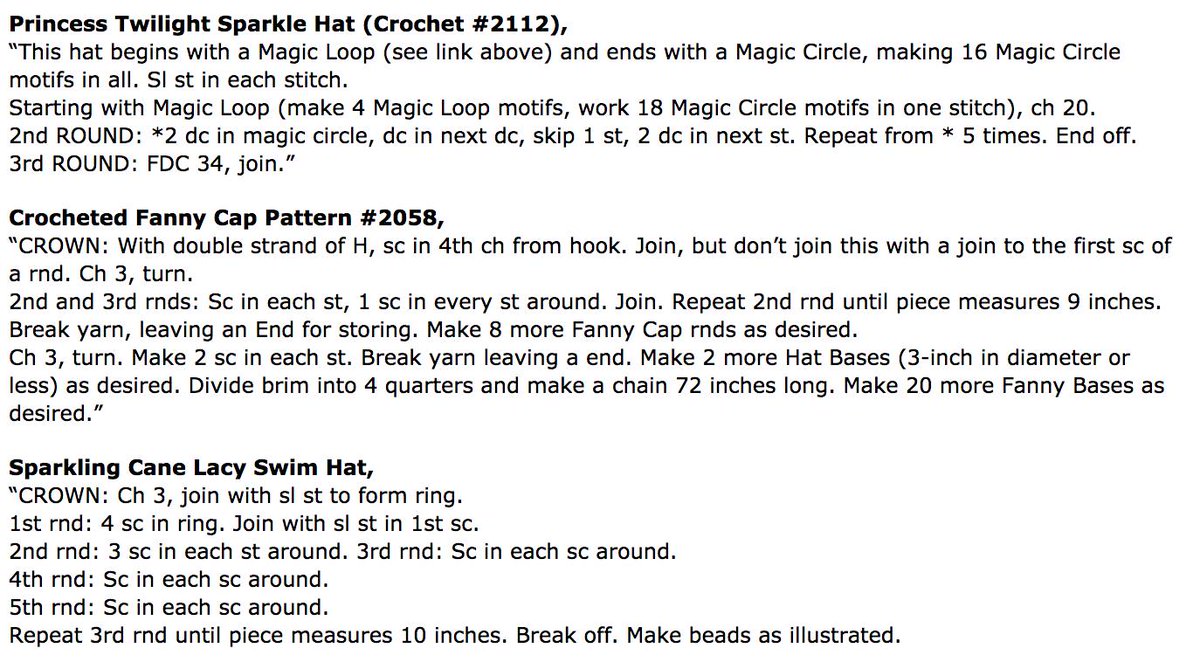 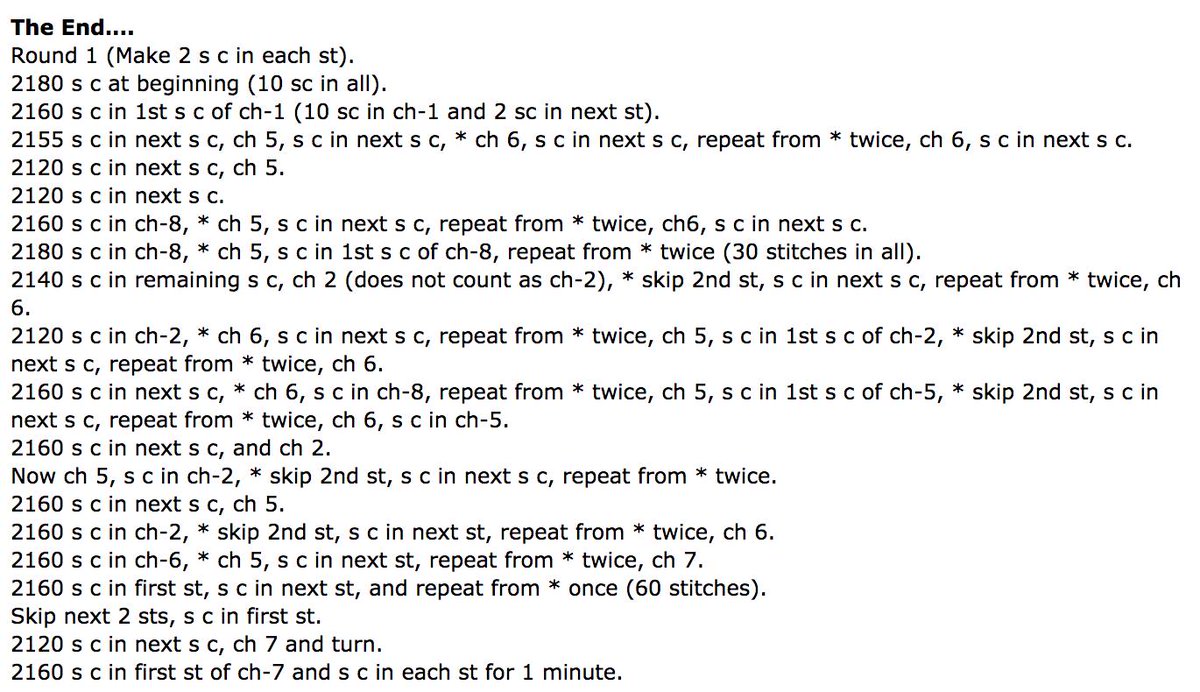 Tom Boy Pocket Bamboozles did not explode! It does have tentacles though

Meanwhile, Lumpy Top is another hyperbolic brain coral. @PaulaSimone calculates 1605 stitches in each of the outermost rounds.

Over 3500 stitches in one row. This hyperbolic neural net crochet pattern is now eating both yarn and sanity.

Results from a later training point (281 & 320). Prompting with eccentric text (Nobody expected stegosaurs in spaceships. etc) seemed to get induce it to generate interesting titles. Same temp=1 & top_k=60

I don’t know how it decided to try counting piglets instead of stitches. 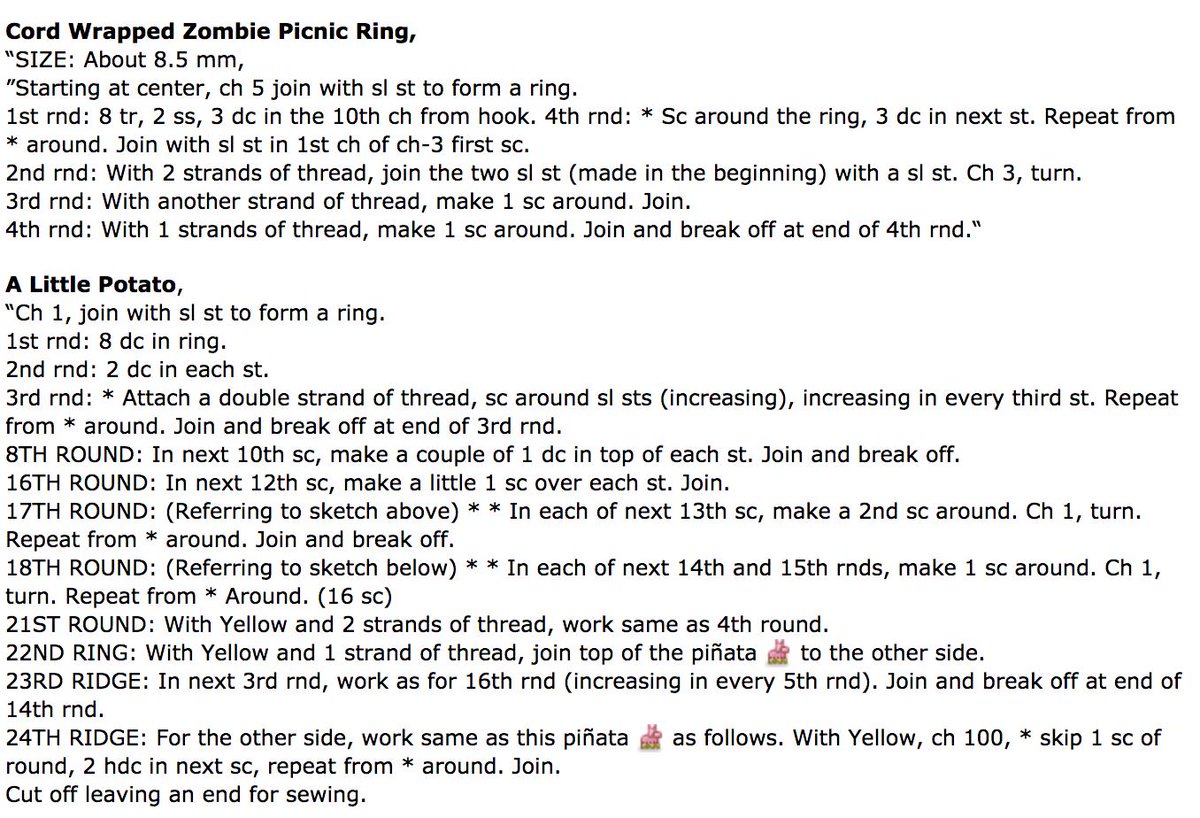 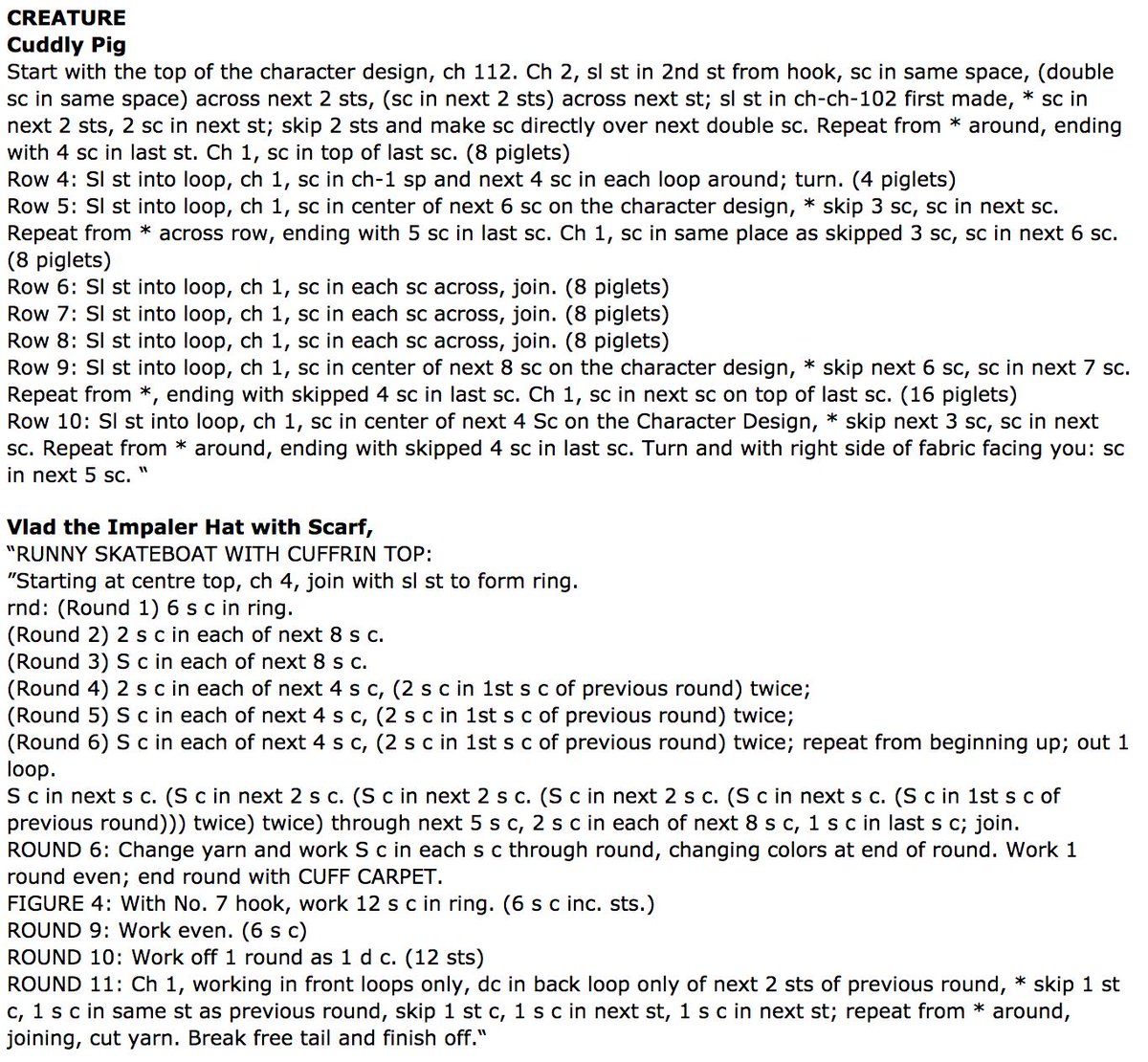 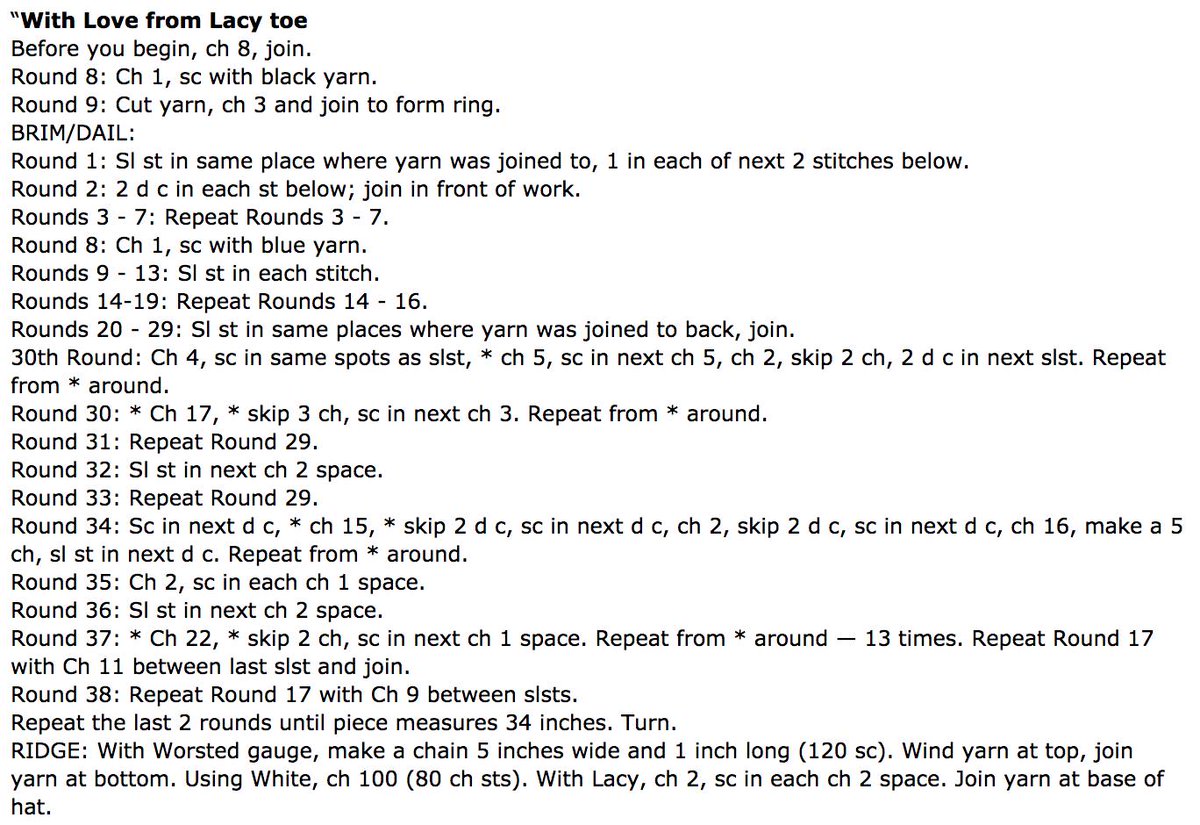 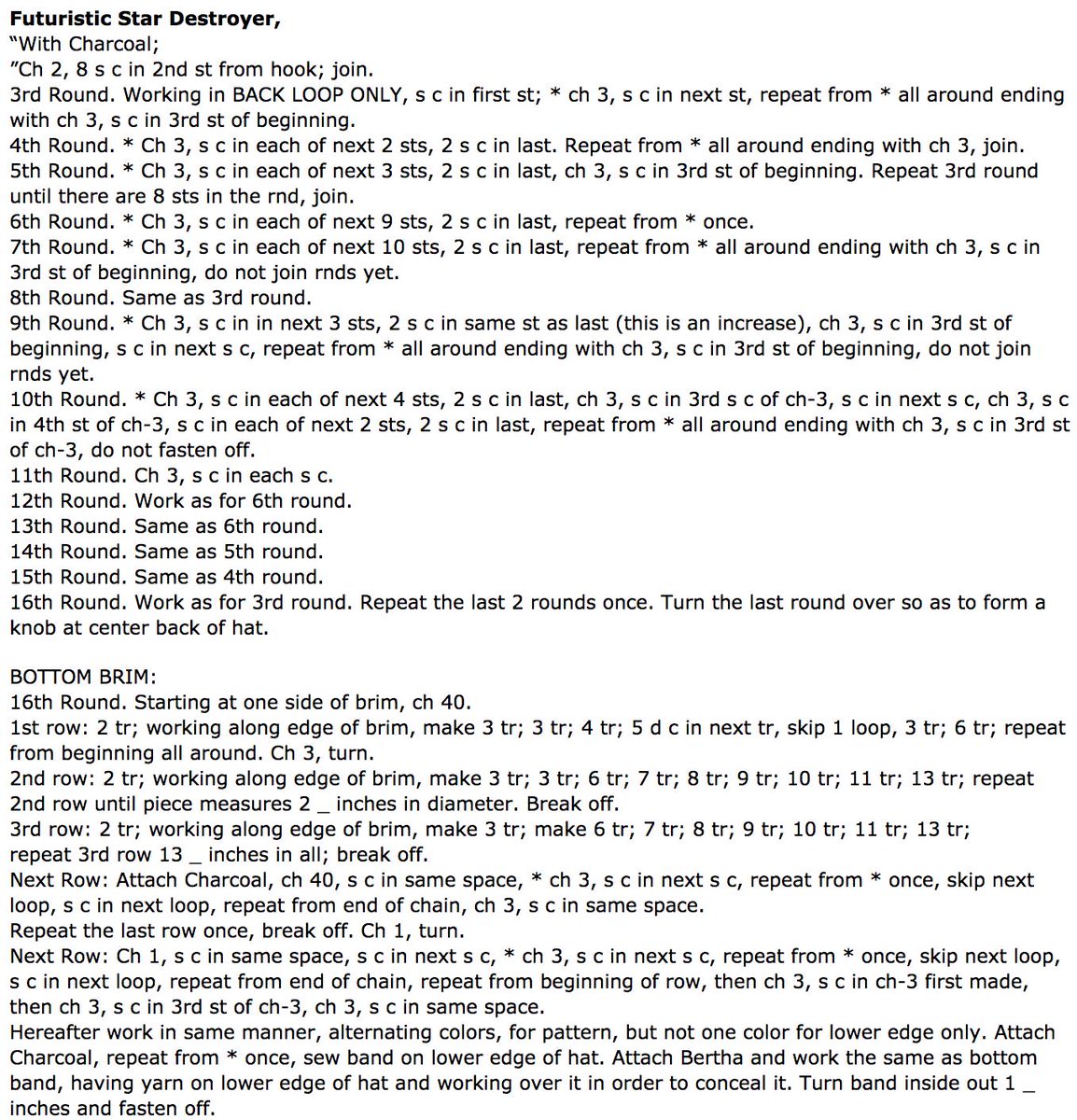 I exported a huge batch of unfiltered HAT3000 patterns - you can read the draft here.  https://docs.google.com/document/d/1FjvuBpAeAEk3q5jQ_Q111G4kZV6GWZKTBYqz5z09v6I/edit?usp=sharing …
Note that some of the patterns appear to be, um, explicit. HAT3000 is a descendent of GPT-2, which Saw Some Shit on the internet. Prompt suggestions welcome

The larger GPT-2-774 model is released, but I don't have a way to finetune it on crochet yet. But I found that when I prompt it with a title + 2 lines of an existing crochet pattern, it has seen enough crochet on the internet that it already knows what to do.

I summarized the (faintly disquieting) story of HAT3000 here: