Warren's plan retains the distinctively closed border we have now--in which border apprehensions are a fraction of what they were a generation ago--but her plan would bring order to a situation that has devolved into chaos.

Let's start with the crossings themselves. /1

Since the Secure Fence Act of 2006 and related enhancements, Southwest border apprehensions have been less than half the average from the 1980s-early 2000s. Go to CBP's website, and they'll show you the first chart, which starts at 2014, but that conceals the historical trend. /2 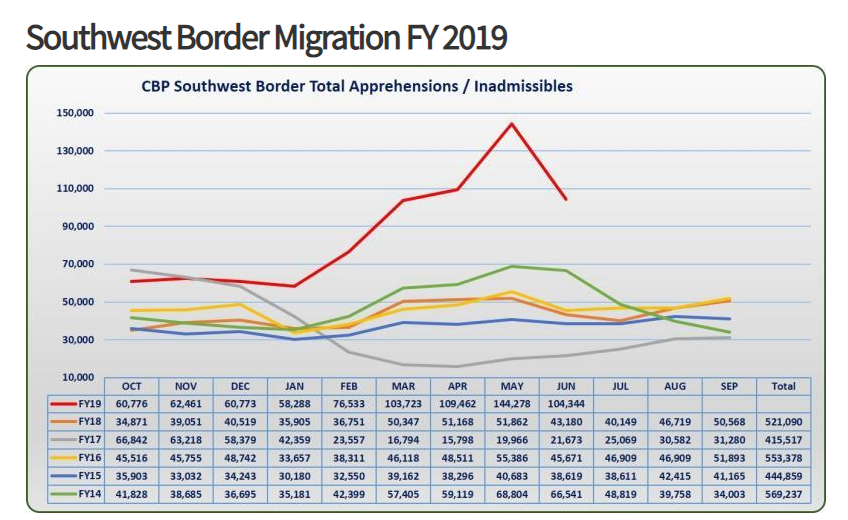 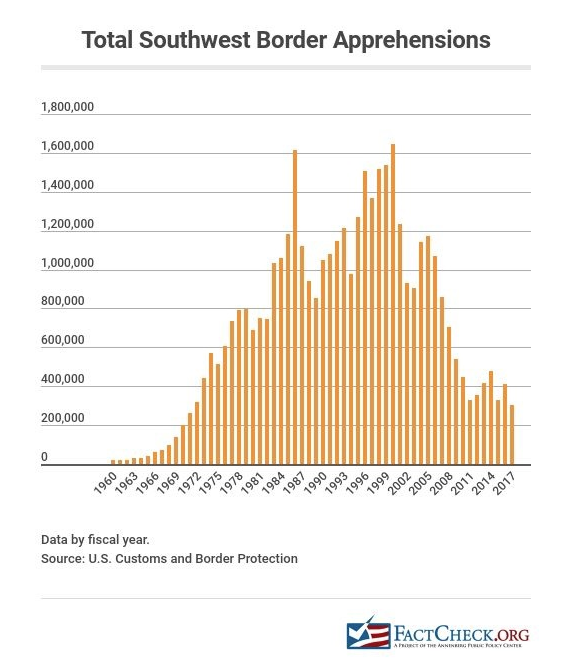 As @NickMiroff thoroughly reported last October, border crossings are fundamentally different than they were in the past. More than half of the arrests are migrant families or unaccompanied minors. They then file for asylum and go into the backlog. /3  https://www.washingtonpost.com/graphics/2018/national/border-asylum-claims/?utm_term=.7e267aa1c304 … 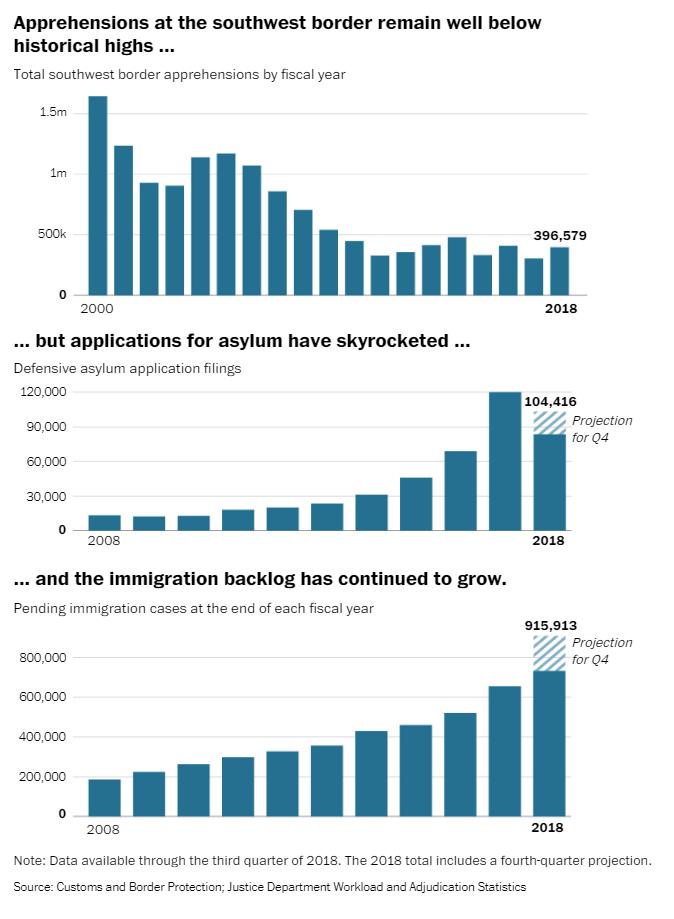 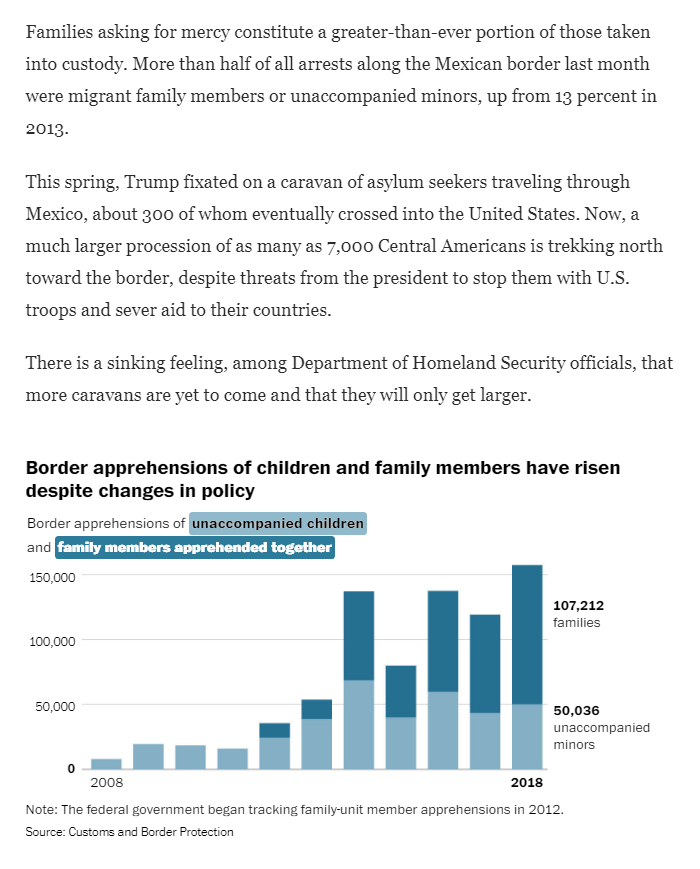 A person can only apply for asylum when "physically present" in the United States. 8 U.S.C. § 1158(a)(1). The Trump Admin keeps refusing or limiting applications at ports of entry so, no surprise, people cross to be apprehended so they can then apply. /4

Sometimes the Trump Admin accepts the application at a port of entry, but makes the applicants wait in Mexico. Putting aside the (questionable) legality and humanity of this, it, too, creates an incentive to cross the border, be apprehended, then apply. /5  https://www.washingtonpost.com/immigration/u-s-asylum-officers-say-trumps-remain-in-mexico-policy-is-threatening-migrants-lives-ask-federal-court-to-end-it/2019/06/26/863e9e9e-9852-11e9-8d0a-5edd7e2025b1_story.html?utm_term=.5c9be5f7639b …

The Trump Admin's solution to that self-made problem is to make conditions so awful that it serves as a deterrent, including separating families and detaining people indefinitely. As @pbump recounted, the Admin sporadically admits that's on purpose. /6  https://www.washingtonpost.com/news/politics/wp/2018/06/19/here-are-the-administration-officials-who-have-said-that-family-separation-is-meant-as-a-deterrent/?utm_term=.4a98022b0b69 …

As @DLind noted, this "deterrent" doesn't work. Border Patrol agents call them "non-impactables,” people fleeing situations so bad that nothing will change their mind. They will find their way here to apply for asylum, one way or another. /7  https://www.vox.com/2019/1/8/18173721/trump-border-facts-truth-speech-lying …

To recap: (a) starting in 2006, we built as much of a 'wall' as makes any sense (b) so border apprehensions are at 40-year-lows (c) but lots of asylum applicants are still coming (d) and efforts to dissuade them at the ports of entry just encourage them to cross illegally. /8

Neither @ewarren nor @JulianCastro has proposed removing the border infrastructure put in place by the Secure Fence Act of 2006, nor have they proposed eliminating monitoring or enforcement of the border. All of this stuff CBP likes would remain. /9  https://www.gao.gov/assets/690/682838.pdf … 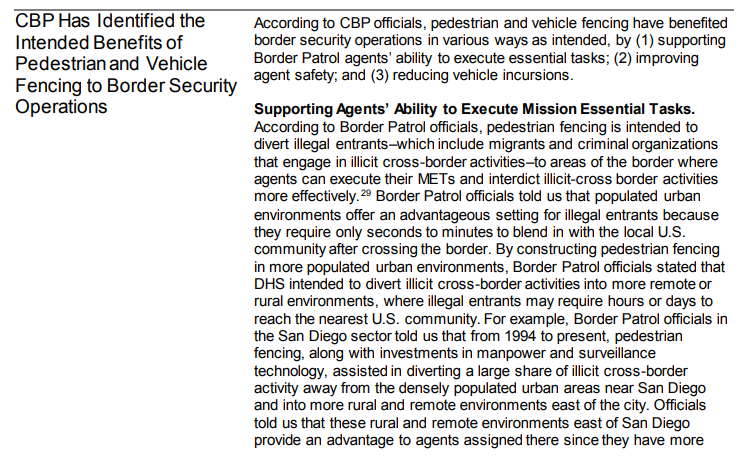 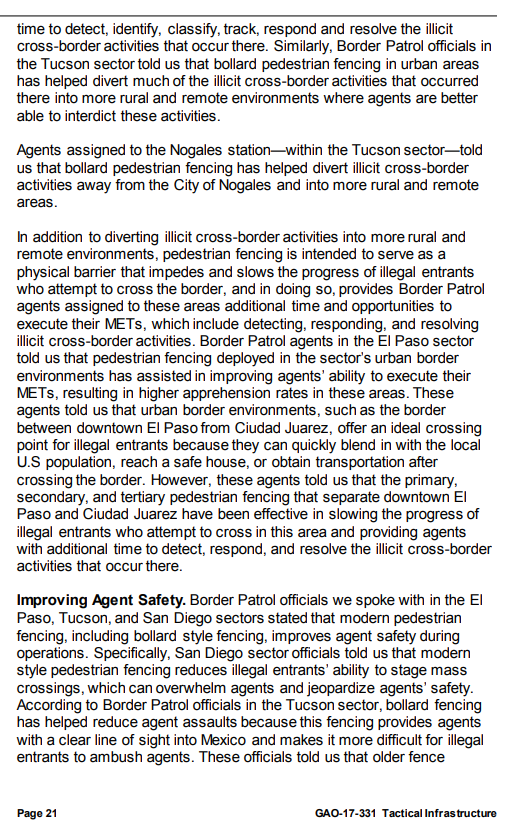 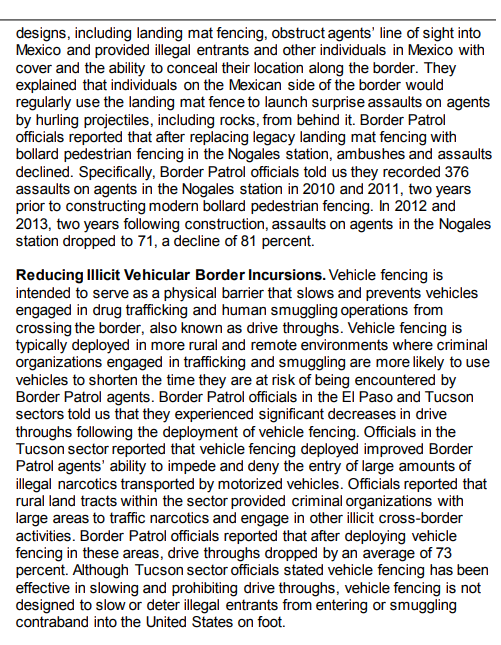 Their plans would provide an orderly way to deal with asylum seekers via timely processing of their civil immigration cases, rather than separating the families, shoving them into cages indefinitely, or, Trump's new plan, shipping them to Guatemala. /10

In case you're wondering, the law nominally allows 'safe third country' asylum processing, 8 USC § 1158, but (a) it's doubtful Guatemala would satisfy the requirements and (b) in typical Trump fashion, the agreement "reads like it was drafted by someone’s intern.” /11 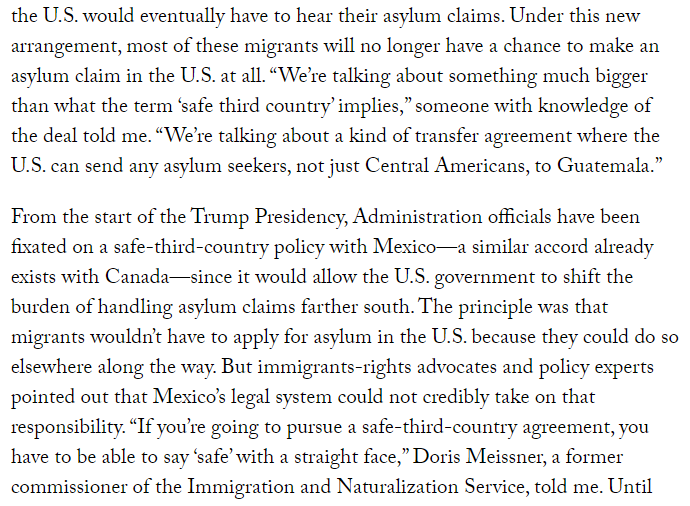 Nobody, not @ewarren nor @JulianCastro nor @AOC, is proposing "open borders." Everybody supports policing the border. The border dispute is over handling of asylum applicants. The Trump Admin's solution was to create a humanitarian crisis. Everyone else wants law and order. /12

The importance of "law and order" here can't be overstated. It's not just the handling of asylum claims at the border that's in disarray; ICE's internal enforcement is a total mess as well. This isn't law enforcement, it's lazy, arbitrary malice. /13

One of the key reforms in @ewarren's plan is "establish professional, independent Article I immigration courts." This isn't some vague suggestion, it's a policy reform endorsed by the President Emerita of the National Association of Immigration Judges. /14

Right now, although there are plenty of honest, hard-working immigration judges, others are inexplicably both arbitrary and still unable to get through the backlog. This is the problem of making them a wing of the DOJ, rather than an independent court. /15

I could go on. You can look at any part of our immigration system and be horrified by the mix of sheer incompetence and lazy cruelty. No Dem is proposing "open borders," they're proposing reforms that would give us a functioning system.
/end

Continuing this thread in light of the below. For starters, in typical Trump fashion, they are *not* following the typical notice-and-comment process for Federal regulations, but instead will implement it immediately, prompting chaos and litigation. /17

Here's the Trump Admin's own one-paragraph summary of what the rule does. /18

They make two arguments for not using APA notice-and-comment procedures: "good cause" and "foreign affairs." Again, this is a bad idea: it guarantees confusion and urgent litigation. I partly it's a choice: they like chaos. They also apparently want to pressure Mexico. /19 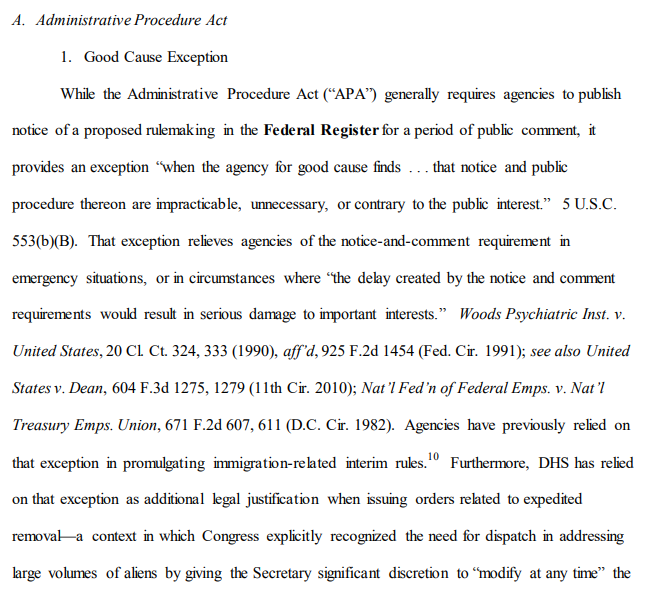 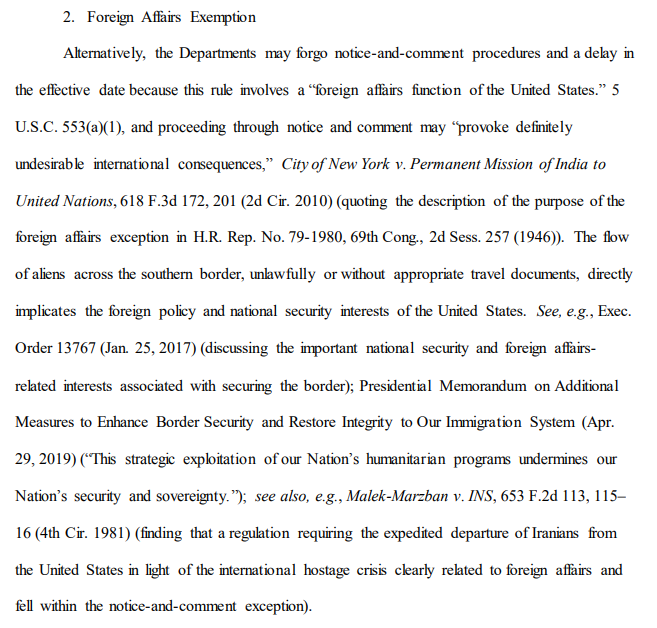 As the Trump Admin portrays it, they're close to a deal with Mexico for holding asylum applicants. Higher up in this thread is an article about a potential deal with Guatemala.

But a critical part of this rule is that they won't need a deal to deport asylum applicants. /20 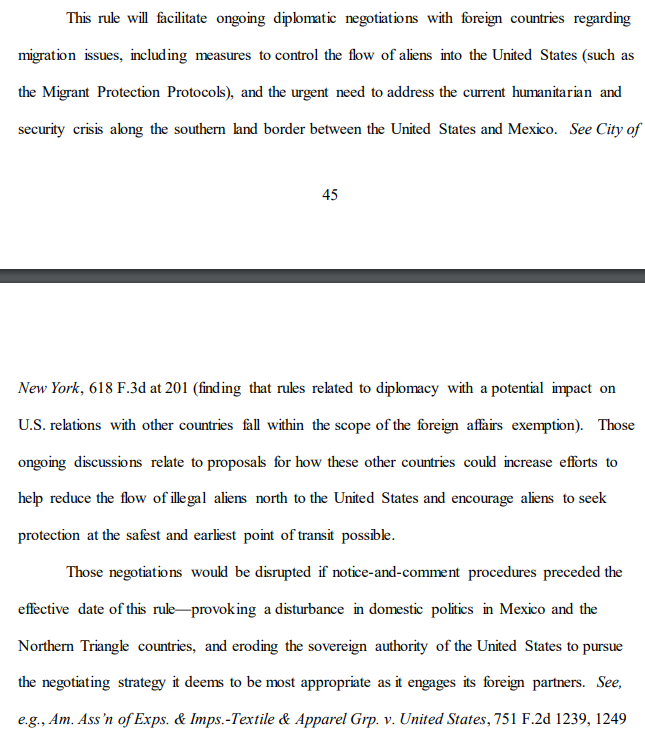 As I mentioned above, the law does allow for removing asylum applicants to a 'safe third country' pursuant to a multilateral agreement. But, thus far, we don't have one of those with Mexico or Guatemala, and it's questionable if either would meet the statutory requirements. /21

They claim "this regulation does not modify withholding or deferral of removal proceedings." But here's the catch (p. 20): by denying asylum applications, people are diverted to another process where they can be removed *without* an agreement, and they have fewer protections. /22

Thus, this rule will (a) deny refugees asylum applications, unless they completed one elsewhere; (b) which gives CBP & ICE more power to remove people without court process; and (c) enables the US to dump refugees on other countries, even without an agreement. /23

I suspect the rule gets enjoined quickly. Their reasons for avoiding APA notice-and-comment are dubious, to say the least. The Trump Admin is going to regret the litigation discovery that arises from claims like these. /24

On the actual merits itself, this is quite a stretch. This single sentence doesn't mean the Attorney General can rewrite treaties and statutes. And, no surprise, part of the Trump Admin's claim to legality is <drumroll> another rule they issued that is currently enjoined. /25 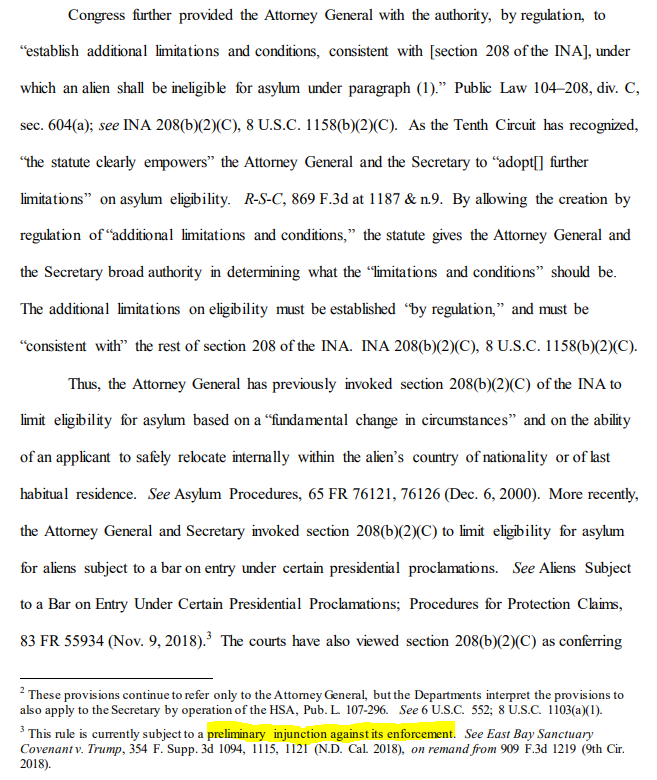 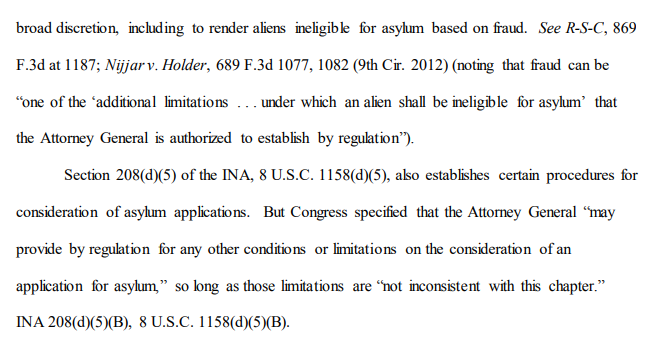 Whatever ultimately happens with this rule, expect turmoil and chaos due entirely to the Trump Admin disregarding the Administrative Procedures Act and issuing a rule that they then immediately implement as arbitrarily as possible, while stonewalling Congress and the courts. /end

As I discussed in the thread above, this was by design. The Trump Admin violated the normal notice-and-comment process so they could spring this on everyone and move quickly before courts could act. The chaos is deliberate.