Wouldn't it be great if a popular Democratic governor were running against this racist clown instead of waging a quixotic bid for president? cc:@GovernorBullock #MTsen

This racist Republican congressman is running for Louisiana governor this fall. If Dem Gov. John Bel Edwards is re-elected, he could veto future GOP gerrymanders like the current ones, which discriminate against black voters & are being sued over #LAgov

Also, my god: GOP Rep. Ralph Abraham is the grandson of Lebanese immigrants. I highly doubt Trump would've seen them as "white" despite their Christian faith, yet here he is going all-in on Trump's bigotry because he needs to win the GOP nomination/runoff  https://www.washingtonpost.com/powerpost/arab-american-republican-lawmakers-divided-on-trumps-travel-ban/2017/02/01/d75e7d10-e8cf-11e6-80c2-30e57e57e05d_story.html?utm_term=.b79a0099fd1c …

This tweet by @fordm is a reference to the film "Starship Troopers," which supposedly satirizes militarist fascism. It's barely distinguishable from what South Carolina GOP Sen. Lindsey Graham said today. There's a black Democrat Jaime Harrison running against him for #SCsen 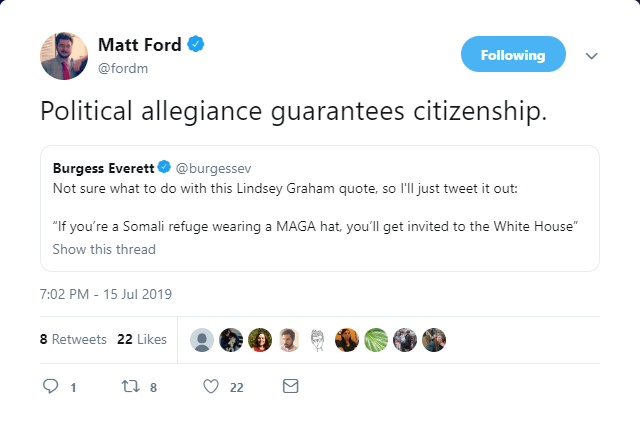 Donald Trump is a white supremacist. He's made racist statements & actions for decades. As president, he's incited racist violence & undermined the rights of people of color. The Republican Party needs to be held to account for continuing to support, enable, & emulate him.

Here's another one: This Republican congressman has been seen as a potential Senate candidate in Wisconsin for a while, yet here he is supporting Trump's racism (he also potentially owed his 2012 victory to GOP gerrymandering)

Dear Jews & fellow Americans of Jewish descent like me: Republican politicians do not give a shit about you. They cynically use Israel to whip up votes by white evangelical Christians. They're defending the same president who called nazis "very fine people" after Charlottesville

#NeverAgain must mean Never Again. Donald Trump & the Republican Party that enables him are clear & present threats to human rights in a way that America hasn't faced domestically in a very long time. If you're wondering why this thread is unusually charged for me, this is why.

Here's another Republican congressman who fully stands behind Trump's racism #PA10. Pennsylvania GOP Rep. Scott Perry won by just 51-49 in 2018 & faces a top-tier Democratic challenger in 2020, when he could very well lose:  https://www.dailykos.com/stories/2019/7/2/1868799/-Morning-Digest-Kansas-Democrats-may-have-competitive-Senate-primary-in-state-they-last-won-in-1932#16 …

Unlike many swing-district Republicans, Pennsylvania GOP Rep. Scott Perry is an unabashed far-right member in a swing district. He's proud of his House "Freedom" Caucus membership & has made no attempt to moderate after court-ordered 2018 redistricting