Here we go. #DementiaDonald is losing it in a predictable yet enjoyable manner.

These hearings should precede impeachment. Here we go. #Mueller walks in.

Well, maybe @RepJerryNadler is a reader :) he did call him “Director Mueller” and he did say the Judiciary Committee is willing to recommend impeachment. He didn’t use that word, but it’s what he said.

Narrator: the Border was not on fire. Narrator: @paulmanafort is in jail for conspiracy.

Mueller “including members of @mod_Russia”

Mueller qualifies that Barr made the report “largely” public. He adds Russia interfered in sweeping fashion. He immediately scotches “no collusion” and also scotches “no conspiracy, saying only “evidence not sufficient”.

That’s not the same as “no conspiracy” at all

As I have been reporting, this means Mueller’s finding was to preserve the right to criminally charge @realDonaldTrump with obstruction out of office. Mueller just laid waste to Barr saying “it falls to me” to decide. Told the Committee to disregard Barr.

MUELLER SAYS TRUMP IS FULL OF IT

And he did NOT REPORT “No obstruction”

Mueller just testified that Barr LIED when Barr said Mueller said he did not only declined to proceed because of the OLC opinion.

He said that IS THE ON,Y REASON he could not prosecute

I owe @DirkSchwenk an apology Mueller does think the OLC opinion says it is unconstitutional to prosecute a sitting President NOT that Mueller agrees with that; he COULD NOT have indicted the President BECAUSE OF THAT OPINION only

THAT IS HOW TO USE YOUR FIVE MINUTES

Mueller is too savvy for Collins

This is good from Collins, but of course Mueller scotched his basic point by saying the Report does not state NO CONSPIRACY or NO COLLUSION

Mueller says he established that Russia wanted to help Trump. Entirely scotches Bill Barr’s lies that this did not happen

Literally nobody has any idea what John Ratcliffe just said

John Ratcliffe is triggered and about to cry, somebody give him a Kleenex

Sheila Jackson up. @RepJerryNadler did not start with any speeches or waffling. Follow his example @HouseJudiciary

Mueller is saying he COULD NOT indict Trump therefore, this is a Referral for Impeachment

Otherwise WHY INVESTIGATE SOMETHING HE CANNOT CHARGE - ASK THIS QUESTION, DEMS

Question: “Director Mueller, if the OLC opinion means you *could not have* charged Obstruction, and only Congress can by impeachment, ISN’T PART TWO OF YOUR REPORT A REFERRAL TO THIS COMMITTEE TO DECIDE ON IMPEACHMENT”

The Republicans are asking the right questions, because they are too dumb to know what they are asking, but Dems need to ask if the point was a referral to the JUDICIARY FOR IMPEACHMENT

- Bob Mueller is an older man. HE CANNOT HEAR YOU WHEN YOU GABBLE. DO NOT GABBLE. HE WILL HAVE TO WASTE TIME ASKING YOU TO REPEAT THE QUESTION

Mueller takes a shot at Barr, the AG should work for America not Trump

Ken Starr spoke for Congress when he should not have; Mueller places it in Congress’s lap

The firm that produced it was @OrbisIntl not Fusion GPS who COMMISSIONED it. @RepJerryNadler @AdamSchiff

is lying in #MuellerHearing. Fusion GPS did NOT produce the Steele Dossier. Only @OrbisIntl did this. VERY IMPORTANT. Glenn Simpson and Chris Steele are NOT THE SAME. Democrats should establish this if they can @AdamSchiff @tedlieu @ericswalwell @RepJerryNadler

LET HIM ANSWER YOU TOOL

“I take your question” causes laughter. I think this must mean “noted” in Congress language

Mueller gives a rare smile to the question “why did @realDonaldTrump want to fire you”? “Can’t say”

scoring here - the President ordered you fired, interference and obstruction

I’ve said it before. I do not trust Glenn Simpson at all. He is not Chris Steele and he wrote no part of the Dossier

doing the EXACT “relay race” I hoped they would do. Both thank him for his service

WOW @TedLieu best since @JerryNadler by far he clearly establishes Bill Barr lied to Congress - Mueller said that the OLC opinion was ***why*** he did not indict - Bill Barr lied and said that was NOT his reason. Mueller testified it WAS the reason

Mueller bemused by @tommcclintock’s utter nonsense about the troll factory

Obstruction
Witness Tampering
Nexus to a proceeding
Consciousness of guilt

Ends on “Nobody is above the law”

Mueller has laid “no conspiracy” “no collusion” to rest

yes, Bill Barr did lie. You have it, madam! Also, who exactly is “Mr. Miller”?

MUELLER IS CALLING OUT BARR I LOVE IT

Who is that beautiful Congresswoman who scored the hit then yielded her time @RepLouCorrea, who is going on @genflynn

TY @dawn_westlake that was @RepValDemings and she used her sixty seconds really well. I’d like to hear more on Flynn

is speaking clearly and is concentrating on the Treasonmeeting. Mueller’s hard no to answering about @DonaldJTrumpJr 5th amendment supports, IMO, my reporting that Don Jr is under sealed indictment :)

Well done sir @RepJoeNeguse. GOP closer @RepMikeJohnson is testifying as he is afraid of Mueller; he talks over Mueller when he attempts a correction

#MuellerHearing the headline @realDonaldTrump did not want 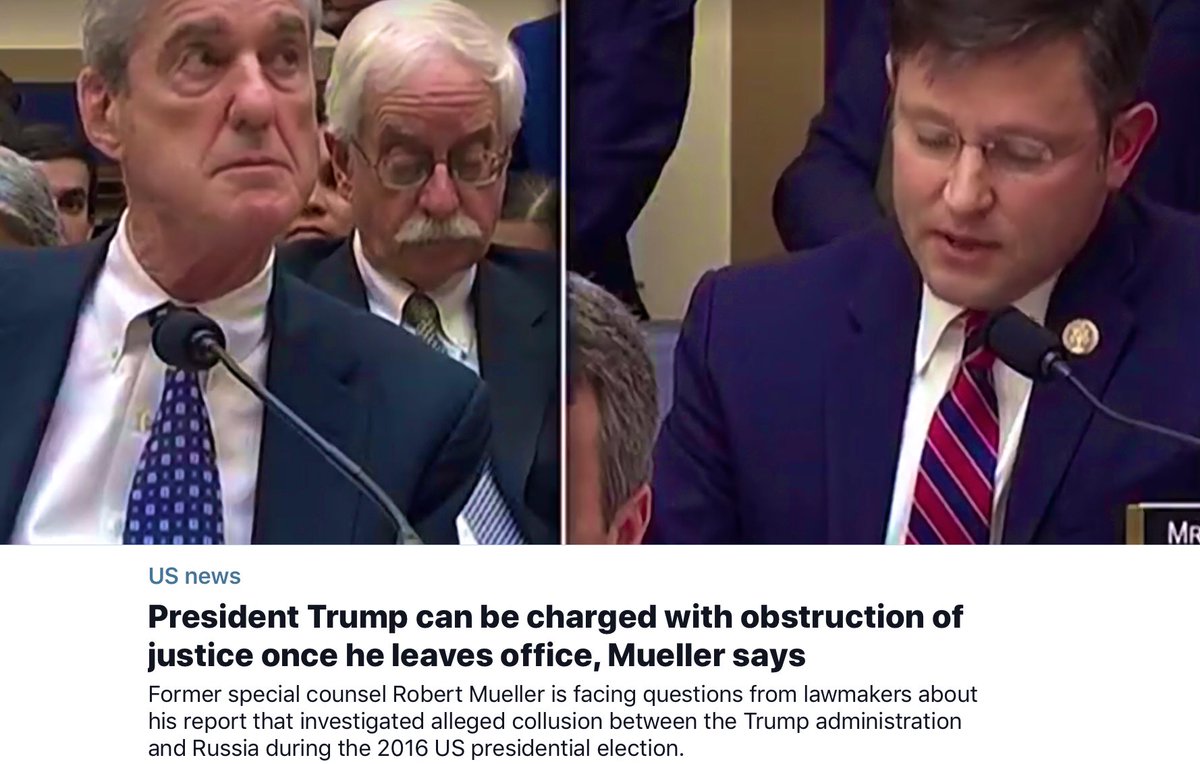 Thank you @RepDean for asking about Barr. It’s clear to me Mueller contradicts Barr and Barr did try to order him on findings. Better get Rosenstein in to impeach Barr too

There will be a new pinned thread for the @HouseIntel session!

UPDATE: my analysis here at the start borne out 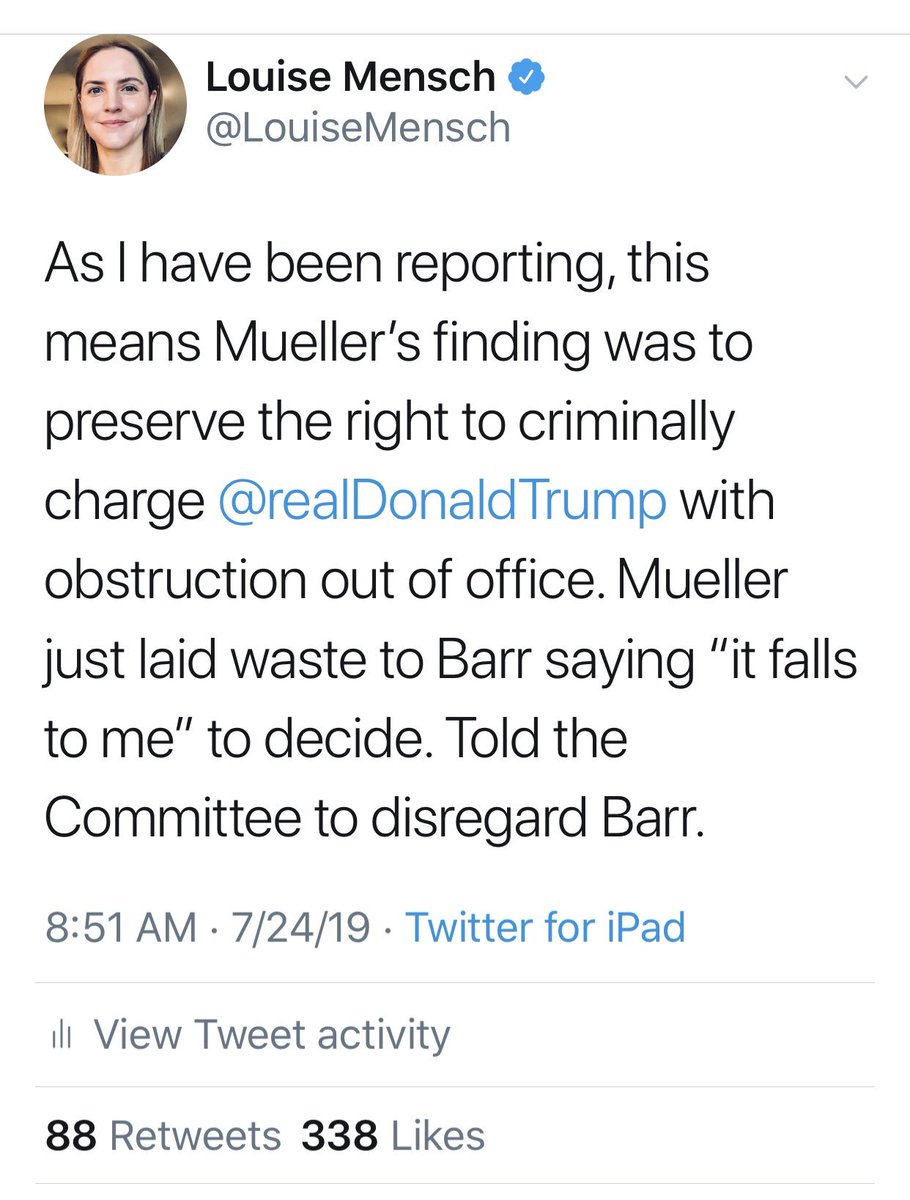 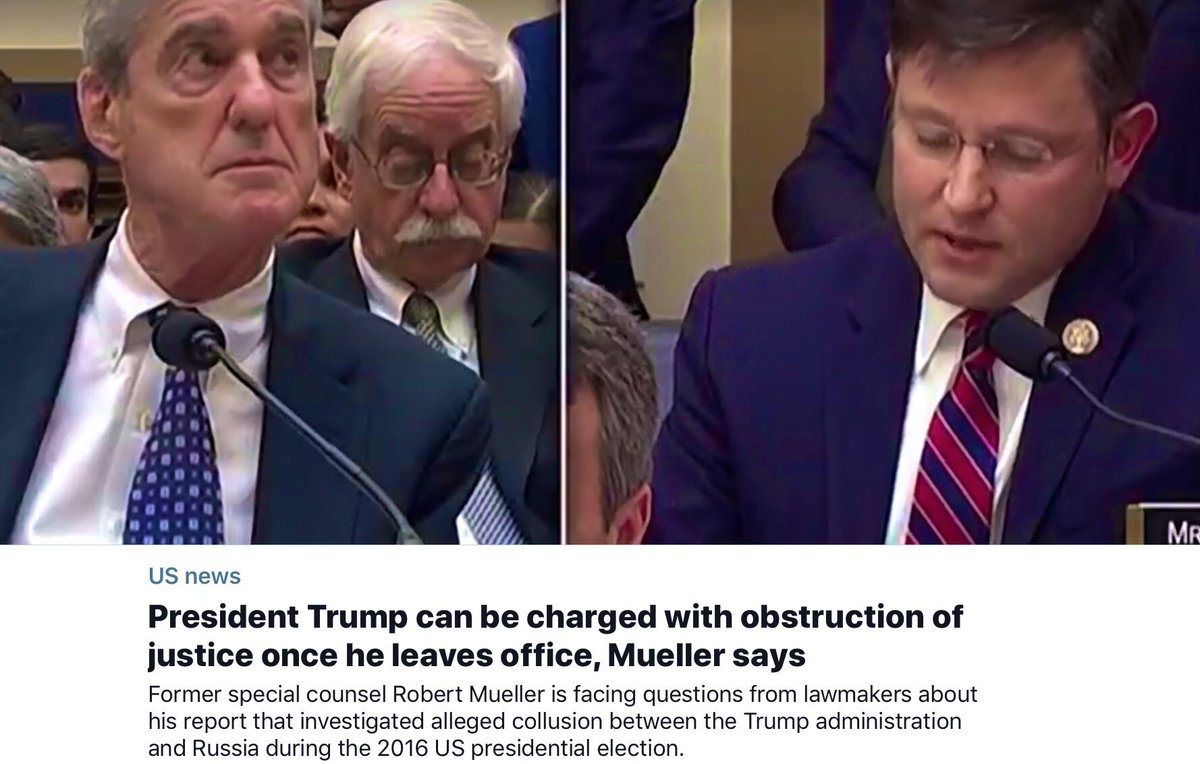 “We have a felon sitting in the White House”

The Democrats CRUSHED this. I could ask for nothing more. @tedlieu @RepJerryNadler the best in an overall magnificent performance