Eric Garland @ericgarland Strategic analyst. Here for the Endgame and the next chapter beyond. Jul. 24, 2019 10 min read

Let's hope it ends with Devin Nunes jumping pantsless into an Uber! 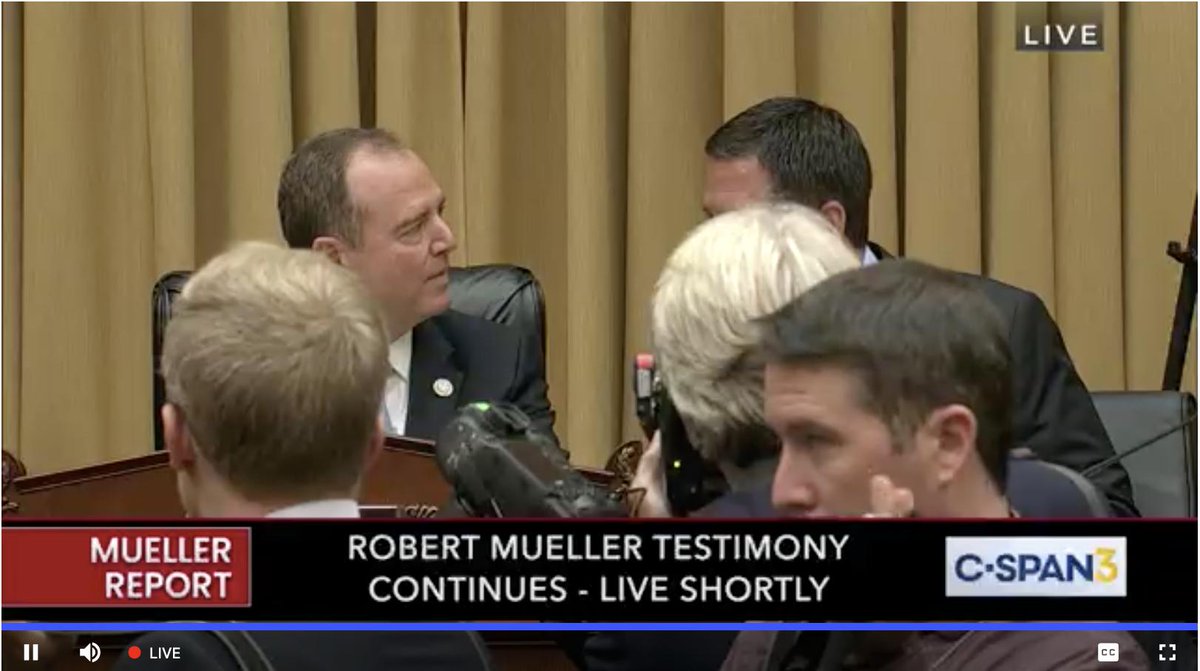 Never forget the most epic tweet about Nunes ever:

SCHIFF: Thank you for coming, Mr. Mueller, and for exposing foreign enemies and treasonous bags of filth. Trump and company are faithless scumbuckets.

SCHIFF: Having Americans run their own democracy seems like a pretty good idea.

SCHIFF: It's about money. Russia wanted out of sanctions, and Trump wanted a Moscow tower.

And Trump's people lied their butts off.

SCHIFF: TL;DR: Russia. So that was a thing. And they tried to cover it up. And it wasn't just about Russians - it was about domestic traitors.

I'm sorry, I can condense this. This is such beautiful language, it's historic. Schiff is a patriot for the ages.

SECRET AGENT DIPSHIT COWPOKE: Well, let me crap all over that beautiful language. God I am so caught. Portuguese intel alone has me screwed. I will die in prison.

COWPOKE: I hate the FBI. Of course I do. I am so freaking caught. Anyhow here's a bunch of shit from 4Chan. We have no story left. We are headed for the River Styx.

COWPOKE: DEMOCRATS CREATED RUSSIA. ON PURPOSE. IN JUNE 2016. Also God they know about why I wanted #FVEY SIGINT infrastructure to the Azores instead of England. I will die in SuperMAX.

COWPOKE: This is an unhinged I am going to die in prison.

SCHIFF: Wow. That was even stupider than any of us could possibly have guessed. Let's get it on.

COWPOKE: It's so weird that a guy from the Special Counsel's Office is here to talk about the thing he worked on.

SCHIFF: You are a complete moron, Cowpoke.

MUELLER: Let's talk counterintelligence. Hold onto your butts. We had two SCIFs built in our offices. We got more intel than any sentient beings in history. And we gave it to the @FBI. MWAHAHAHAHAHAA.

MUELLER: There are several ongoing matters. I suspect dry cleaners will be flush from pants cleaning once the total number is revealed.

MUELLER: Russia's actions have been one of the most serious threats ever.

SCHIFF: Russia hooked up with the Trump people, right?

SCHIFF: They tried to make money from Russians during the transition?

MUELLER: We caught us some witches, so f**k him.

SCHIFF: He was planning to do big business in Moscow, right? A billion bucks?

MUELLER: Yup. We indicted a bunch of them.

COWPOKE: OK, now I'm going to stupid this up.

COWPOKE: The FBI failed to do this counterintelligence thing God I miss my clearance. I learned neat things.

Why haven't you revealed FBI's counterintelligence operations in public?

COWPOKE: ISN'T IT TRUE THAT ALL COUNTERINTELLIGENCE STARTED IN 2016! MIFSUD! AUSTRALIAN! RUSSIAN AGENTS! YOU NEVER INVESTIGATED! btw do you have Boris Johnson caught?

COWPOKE: You charged George Papadopoulos by TELL ME MORE ABOUT COUNTERINTELLIGENCE!

HIMES: So the Russians were looking to make Trump president, which would help them?

HIMES: Russians got into our social media. Who was that to help?

HIMES: Wikileaks was a Russia intel Op. Who was that to help? 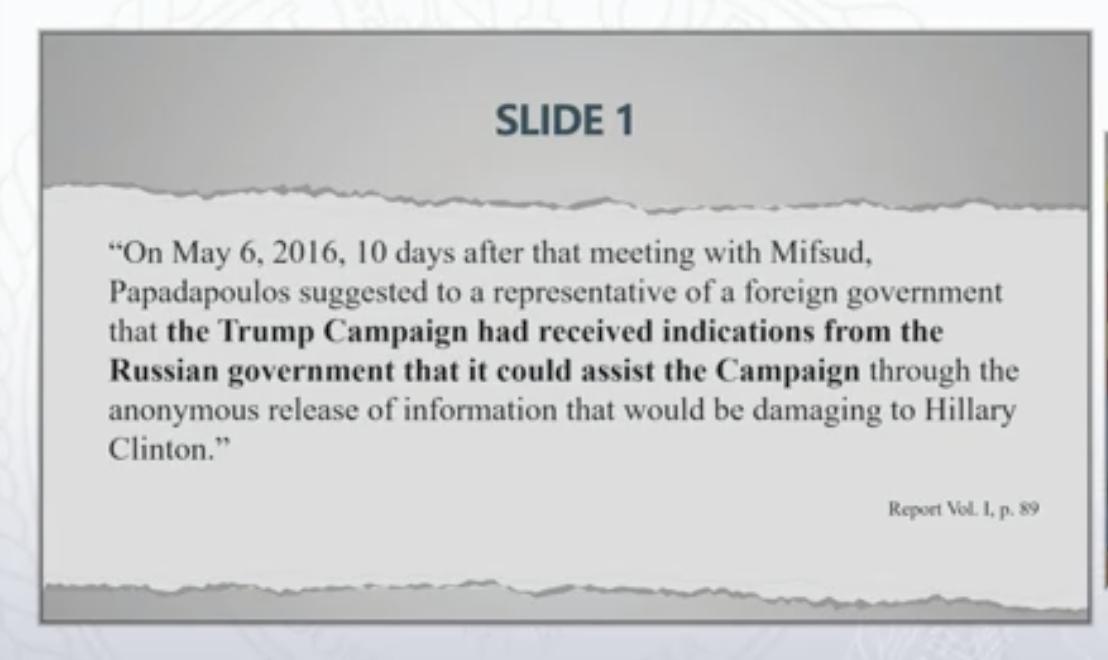 HIMES: Should you conspire with foreign spies in an election?

MUELLER: Uh. Not so much. Crime.

RATCLIFFE THIS IDIOT AGAIN: Didn't you change the report after you closed the office?

RATCLIFFE: Was the Steele Dossier there to interfere in our politics?

(EG note: I think some people involved with the Dossier are in trouble. Leave it there. Mueller is. 😎)

SEWELL: Is conspiracy with a foreign government for an election a bad thing? Like the Russia meeting?

SEWELL: Did the campaign go to the FBI to tell you they conspired with Russian spies?

SEWELL: You haven't indicted them so far. But that seems really criminal.

MUELLER: I didn't say criminal. Yet.

TURNER: So a Special Counsel isn't the boss of the Attorney General.

TURNER: I BROUGHT YOUR LAW SCHOOL TEXT BOOKS! An AG CAN'T EXONERATE A PRESIDENT AND YOU SAID EXONERATE! LET'S ARGUE ABOUT A WORD!

MUELLER: Wow. You went to Wikipedia.

TURNER: I AM SUCH AN AWESOME ATTORNEY, I WILL TOTALLY OUTWIT YOU! YOU COULDN'T EXONERATE HIM OR (not making this up) MAKE HIM ANDERSON COOPER!

CARSON: Manafort is a traitor and he's in the pokey. He's in touch with Russians, yes.

CARSON: He gave campaign polling data to a Russian spy and offered to brief a Russian oligarch, right?

CARSON: Is it bad for an American presidential campaign official to conspire with Russian intelligence?

CARSON: Did the Russians own Manafort.

CARSON: Isn't he a traitor-ass traitor? I think people like that are traitors.

WENTRUP: Did any of the Trump Campaign work directly for Wikileaks or were they intelligence officers of the Russian GRU? GOTCHA! THEY DIDN'T DID THEY!

WENTRUP: I worry about Dems. Some people call Trump a Russian agent. Your report doesn't say that!

MUELLER: Yup. That *sentence* isn't there. But come on now.

WENTRUP: Did you try to expand the investigation?

MUELLER: I'm not dumping out counterintelligence data and decisions, you twit.

SPEIER: Mr. Mueller, you are the greatest patriot in this room, and you are a heartthrob.

MUELLER: Yeah, and we better fix that. PS I was talking about this in 2011.

SPEIER: Can you do a sound bite for TV news?

MUELLER: This is really bad and we need to shut down enemies and put criminals in the slammer.

STEWART: No person is above the law, but what about innocent before proven guilty! Some of these traitors are unindicted! Isn't that unfair? It really upsets Ivanka. Also: LEAKS! Poor Roger Stone!

MUELLER: When you are adjacent to treason, you might get investigated. Yup.

STEWART: Why didn't your office investigate the leak of the stupid-ass letter of Bill Barr that I have no proof you leaked?

QUIGLEY: You can indict presidents after they leave?

QUIGLEY: What about statute of limitations? If it's five years and the president serves for eight, what do we do?

(This is a great question.)

QUIGLEY: Wikileaks isn't really a publisher, but a front for Russian intel, right?

MUELLER: They got indicted.

QUIGLEY: Trump loved Wikileaks. Does that bother you?

MUELLER: He's under investigation. So guess.

CRAWFORD: Didn't the investigation not find anything because Peter Strzok, who had a cell phone?

MUELLER: You are a moron.

MUELLER: So sad about your clearance. Really.

SWALWELL: So obstruction of justice shows consciousness of guilt?

SWALWELL: And a bunch of these guys lied their asses off, right?

SWALWELL: Did they dangle pardons?

SWALWELL: Wanted to talk to Trump.

SWALWELL: And lying to you is bad?

STEFANIK: DOSSIER! And how long has counterintelligence being going on?

STEFANIK: DOSSIER! DOSSIER! THAT'S WHY YOU DID ALL THIS! THAT'S WHAT YOU TOOK TO THE FISC, EVEN THOUGH THEY DECLASSIFIED CARTER PAGE'S FISA AND IT WASN'T IN THERE.

STEFANIK: Tell me about counterintelligence.

MUELLER: Seriously you people are getting on my nerves.

LAJES BOY: God I am going to be in prison. Did you approve a FISA on Carter Page?

MUELLER: You're on HPSCI and are apparently too dumb to know I'm not a judge on the FISC.

CASTRO: Here are more lies from Cohen. And it's coordinated with Kremlin messaging!

HURD: Instead of your report, let's talk about the US MSM as sources. They've done such a great job.

HURD: Do you think counterintelligence should warn people targeted by Russian Active Measures?

HURD: So we should push back on Russia harder?

MUELLER: It's not just Russians doing this. Other countries are using their techniques.

HECK: Kushner met with the head of a sanctioned Russian bank? To get a billion for 666 5th Avenue?

HECK: It's in the report.

RATCLIFFE: My questions are so dumb, I need to yield my time back to Nunes.

NUNES: Tell me about counterintelligence on Erik Prince god I am so tired of running just put me in prison already

NUNES: Kilimnik was connected to the State Department I am so weary the treason is crushing my shoulder dragging me toward hell

WELCH: Can I ask the collusion question again for the 95th time today?

WELCH: Can I ask the question about charging Trump?

WELCH: Can I ask a bunch more questions that you've answered 50 times today?

WELCH: DUDE THEY WORKED WITH WIKILEAKS!

MALONEY: You're a veteran and that's great. Why didn't you subpoena the president?i

MUELLER: We wanted to. But the investigation was over while they still were dragging their feet. So.

MALONEY: What about the written responses?

MUELLER: They weren't too helpful.

MALONEY: You were just lazy about interviewing Trump!

MUELLER: We had more than a little evidence. Did you not see Judiciary this morning?

DEMINGS: Were the President's written answers under oath?

DEMINGS: So he kinda lied to you.

KRISHNAMOORTHI: So there's a ton left in counterintelligence, right?

KRISHNAMOORTHI: Lying about fooling around with spies to the FBI is bad, right?

MUELLER: Yup. We indicted him.

KRISHNAMOORTHI: Surely, there has been interference in our elections before, but this is the first investigation of its kind.

MUELLER: Yup. This was pretty bad.

NUNES: I am too haunted to talk. You talk, Adam. I'm sorry about building a wall in our offices between Dems and GOP. God I have made so many decisions...

SCHIFF: These people are treasonweasels. Don't they suck more than law-abiding patriots?

SCHIFF: Boy a whole lot of people are screwed. Betraying your country really can get inconvenient. I'm sure there's no one within three feet of me in that trap. 🤔

SCHIFF: These people were all total idiots and had no idea what counterintelligence is.

SCHIFF: Is Trump so dumb as to think he will get to go back into business after this?

SCHIFF: Any final words, Mr. Nunes and did you notice I pronounced in a perfect Portuguese accent? 😎

SCHIFF: Trump is legally screwed, obviously, in perhaps more ways than any other human alive, and who knows - maybe we'll impeach him? Let the indictments rain down.

But hey, the Russia thing is no longer up for debate thanks to you.

SCHIFF: BOBBY THREE STICKS GETS TO LEAVE FIRST. THE REST OF YOU SIT.

That was historic. Wow.