On the TODAY show yesterday a black dermatologist came on to discuss the NYTimes article I was featured in about sunscreen and black people. She rejected my arguments while providing no evidence to the contrary. #thread  https://www.today.com/video/should-people-of-color-wear-sunscreen-dermatologist-weighs-in-64880197529 …
1/

Part of the problem in discussing the issue of UV exposure and risk of skin cancer in people of color is that you have to separate out melanoma from “non-melanoma skin cancer” i.e. squamous cell carcinoma (SCC) and basal cell carcinoma (BCC).
2/

I often focus on melanoma because that is the skin cancer that is most lethal. As I’ve stated many times, and the TODAY show dermatologist agrees, most are on the palms and soles, again that’s NOT sun related. See previous tweetorial:
3/

The TODAY show dermatologist QUICKLY pivots to talking points about melanoma survival rates as a reason for sunscreen use, which I’ve discussed before MISSES the point. Wearing sunscreen has nothing to do with survival or delays in diagnosis. NOTHING.
4/

Also, using melanoma survival rates when comparing whites and blacks is deeply problematic because of melanoma overdiagnosis among whites which inflates that survival statistic. (More on that in another tweetorial coming soon)
6/

The dermatologist really goes off on the deep end when she suggests that regardless of your skin type you should get “mole checks.” Is she suggesting screening everybody regardless of skin type? That’s inappropriate.
7/

This would be like recommending mammography for men because they get breast cancer too!!!
8/

Let’s flip to discussing squamous cell carcinomas which she brought up as all sun induced among blacks. First, the incidence of SCC is EXTREMELY small.
9/ 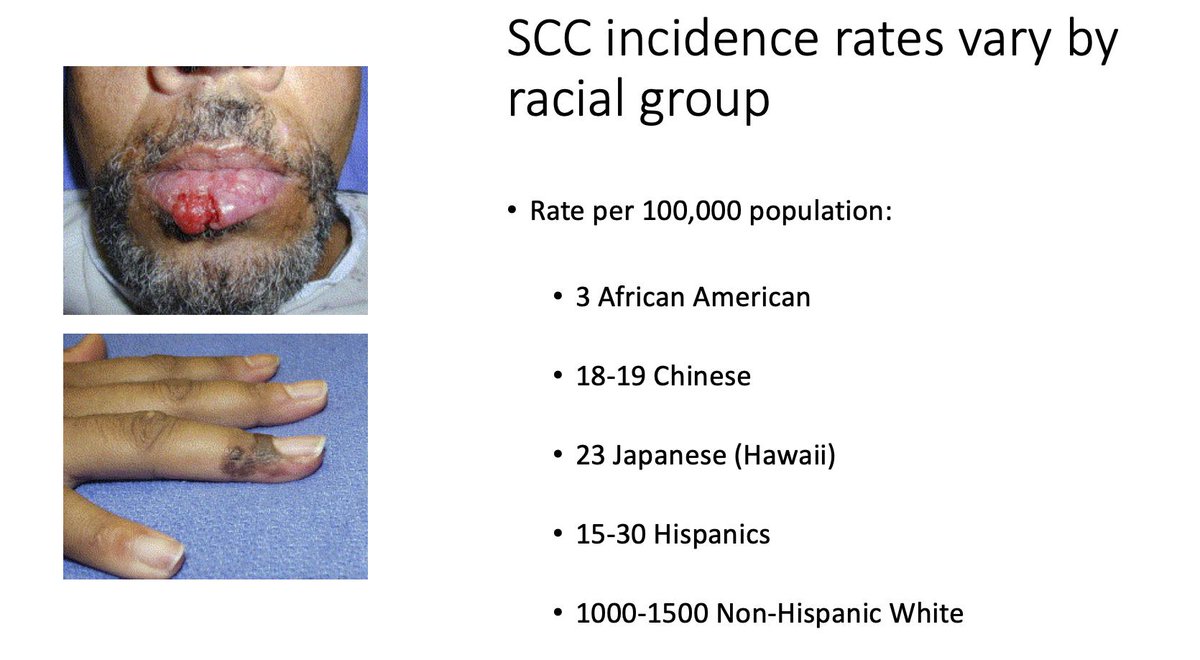 Side note, from a public health / epidemiology standpoint with SCC incidence this LOW, even if UV was the cause in blacks, reducing skin cancer incidence any lower from this already low number would be EXTREMELY difficult.
10/

There are very few studies looking at the association of UV and SCC risk among blacks, and the ones that have don’t seem to show a relationship when considering their location on the body.
11/

Also, skin cancer can occur anywhere you have skin, that does not mean that all skin cancers in black people are UV induced (they aren’t).
12/

Thought experiment: if UV was important for SCC in blacks, shouldn’t we see a lot of SCC in sun exposed areas in immunosuppressed patients (e.g. those with organ transplants). This is the case among white people, but when you look at non-whites it’s a different story
13/ 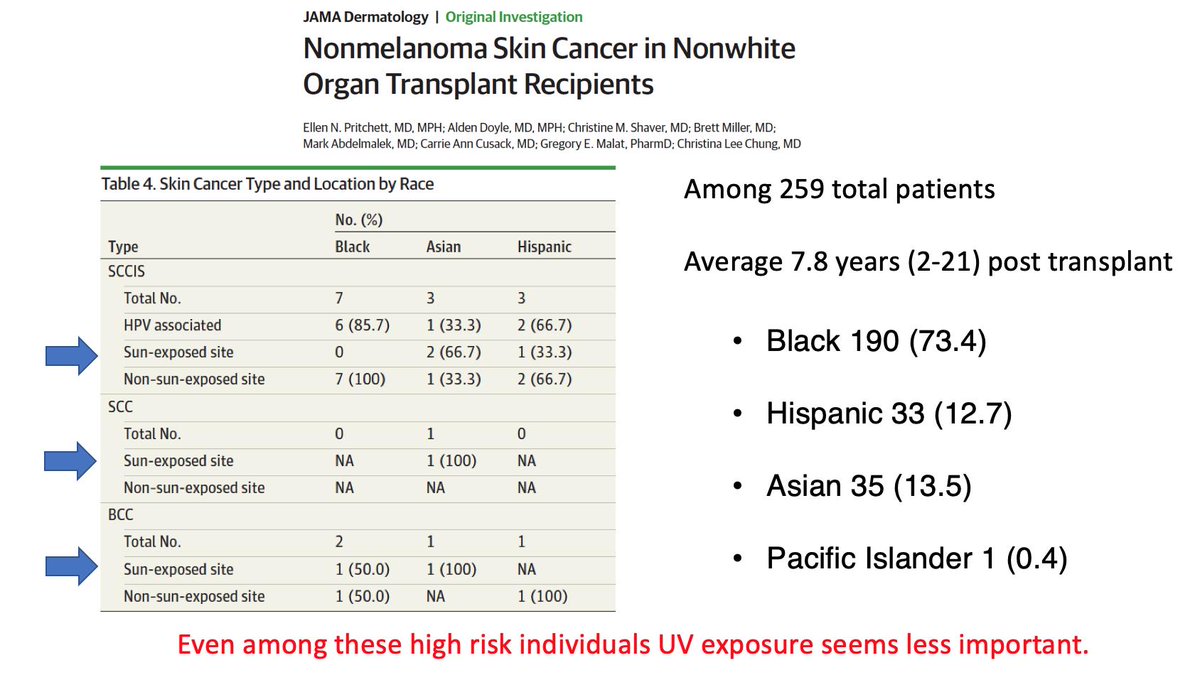 The SCCs that you see in nonwhites are most likely HPV related.
14/

I’m not on an island here about SCCs and sun exposure in black people, see this review article from nearly 15 years ago. There is no evidence of association. Nothing has changed since 2006. See here:  https://www.ncbi.nlm.nih.gov/pubmed/17052479  [insert screen shots]
15/

Lastly, lets briefly tackle the other incorrect assertion made by the TODAY show dermatologist about UV light for gel nails and risk of skin cancer. This fear mongering relates to 2 case reports from 2009.
16/

This notion has been debunked. Martin Weinstock and colleague compared the risks of narrowband UVB (nbUVB), an established very low-risk procedure often for psoriasis patients to that of UV gel nail treatment. See here:  https://www.ncbi.nlm.nih.gov/pubmed/23223132
17/

The investigators calculated that you would need more than 250 YEARS of weekly UV nail treatments to incur the same risk as a single course of nbUVB.
18/

Here is a summary of the history of this controversy as of 2016. Basically, the risk is so incredibly low don’t worry about it!
19/

The night before the TODAY show aired, I was invited to give a quote, but that quote was not run.
20/

Next time the TODAY should invite a dermatologist that has expertise in this area and not somebody that is simply regurgitating talking points. Maybe this is too much to ask?
21/

The same misinformation was on display during melanoma Monday, when a young black man was SHAMED by the same black dermatologist for not using sunscreen after he developed a melanoma on the sole of his foot!!! See here:  https://www.today.com/video/skin-cancer-signs-and-symptoms-melanoma-patients-share-stories-58939973560 …
22/

Look, I admit that public health messaging in this space is difficult, but that doesn’t mean we should mislead people let alone shame them. The public (and black people in particular) deserves to be told the truth; they/we deserve better.
23/end