Since I posted that thread about pitching, a number of you have asked me questions about what happens AFTER a pitch is accepted, and what you should and shouldn't expect in the editorial process.

I think this is super important, so let's talk about it, Q&A style! 🧵👇🏻

Before we begin, a disclaimer: Every editor and every publication is different. Results may vary. And these are just my personal opinions, both as an editor and a writer! Experience will always be a more thorough teacher, but hopefully my experiences can at least be helpful.

So, based on the emails, DMs, etc that I received... here are the common questions I've gotten about what happens AFTER you pitch. Let's do it.

Q: Is my editor allowed to ask to see a written draft before they accept my pitch?

A: Sure, they can ask! But you're under no obligation to share it if you're not comfortable with that. This is called writing "on spec" and it's up to you if you're okay with that.

You might be willing to write the piece and share a draft if it's a bigger name publication/seems worth the risk. But on the other hand, if it's not written yet and there's no guarantee you'll be paid, it's understandable that you might hesitate doing potentially unpaid work.

Q: So what happens once an editor accepts my pitch?

A: Every pub will have its own unique process, but essentially, you can expect to negotiate a rate, receive a contract, agree on a deadline and word count, and then you'll start writing!

Q: Ummm, how exactly do you negotiate a rate?

A: Google to see if you can track down what that publication typically pays! And then push a little higher. Every editor is given a budget that they have to stick to, so please don't take it personally if we can't offer more.

You can almost always find what a publication typically pays in an online search. There are also databases like this one on Contently:  https://contently.net/rates-database/rates/ …

On the editor's side, we have a budget that we're given that is subject to change, so just because you were able to find one particular rate, it doesn't mean that's what we're currently paying! Editors may also determine rates depending on your level of experience/influence.

Editors usually have a typical rate depending on the type of content/how much work is involved. Social media influencers with more followers may also get a higher rate, because on the business side, it's understood that you're paying for their writing AND their promotion of it.

Q: What if I'm not happy with the rate? Should I still publish?

A: It's entirely up to you! You don't have to. Reasons you might anyway include:

-You admire the publication or editor
-It's a niche audience with limited options of where to publish
-You need the money (valid!)

Q: Okay, so once the paperwork is squared away and I've submitted my first draft, what should I expect from the actual editing process?

A: This one is tricky to answer, and I'll explain why.

So I think the better question is, how do I know if I have a good editor? And the best way to know is to think, first and foremost, of what you are looking for in that particular relationship.

Some people just want their story published and to get paid. That's fair! So a "good editor" to that person is someone who isn't fussy, is willing to do the heavy lifting on their end, and isn't expecting many revisions.

However, this doesn't describe most writers that I know.

As an editor, I focus on supporting my writers so that they can create a story that they're proud of and excited about. And most importantly, I want them to keep ownership over that content, and to feel like it's still THEIR voice and their story.

Some editors will essentially just "clean up" the piece so that it's grammatically-correct and not much else. Some are "heavy-handed" and rewrite quite a bit based on what they think sounds best. Some editors will leave a lot of notes and ask you to make the changes.

I tend to leave notes to guide writers, and if I do rewrite anything, I highlight it and let the writer know, so that they can go back in a rephrase if they don't like how it sounds. Because it's THEIR piece, not mine! I edit the way I would want to be edited.

IN MY OPINION... a good editor should be aiming to explain why they made particular changes, if it goes beyond "this was more concise" or formatting (like bolding certain things or adding headers).

We can't always, but it's a red flag if you aren't getting that feedback *ever.* 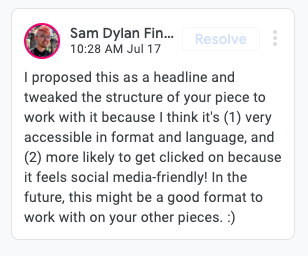 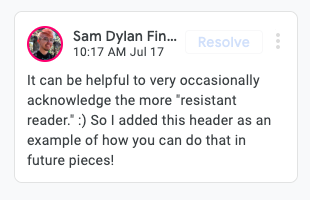 Not all editors have the capacity to offer much guidance or support, which is why you might have an editor doing a lot of rewriting or not really offering much feedback. That may not work for you, and that's okay! It might not be a good fit.

Q: Should I be scared if I got like... a LOT of feedback? Does that mean I did a bad job?

A: Nope! It means your editor is pushing because they believe you can do something really awesome with the piece. They wouldn't put in that kind of effort unless they felt it would pay off!

Q: What happens if they rewrote like, my entire piece... and it doesn't feel very "me" anymore?

A: Some publications do this, where they seem to expect all their pieces to sound identical, so editors work accordingly — which I think is a shame, but it happens.

It's your call if you still feel comfortable publishing that piece with the edits that were made. At the end of the day, though, I would never recommend publishing something that you're not comfortable with. Rarely have I seen that work out for someone.

Editors may also switch up their approaches if they feel a writer needs it! Some writers want a lot of feedback and guidance, because they're looking at the long term ("how do I improve my craft?") while others just want a solid byline. I approach those writers differently!

And the truth is, some editors are writer-centric (meaning they focus on making sure a writer is having a really solid experience, growing in the process, getting what they need from it)... others aren't, because they have publishing goals and need to move quickly.

Q: Can I ask my editor to hop on a call/clarify notes/-insert other ask here-?

A: You can always ask! It doesn't mean an editor has the capacity, so be prepared for any answer. But if you need *clarification,* an editor should always be providing that in some form or another.

Q: How long does the editing process take?

A: A lot longer if your editor is writing Twitter threads instead of replying to your emails. 🙈

It depends! Some pieces take longer than others. You can always ask your editor for a guestimate.

It's important to know that editors aren't JUST editing pieces, either. There are so many different dimensions to our jobs.

And if you have ADHD... and you're out of Adderall... and you get overwhelmed... just... yeah, we're humans! So just bear that in mind, too.

Q: What are some editing red flags to look for when working with a new editor?

I think in general, pay attention to your gut. If you feel like "words are being put in your mouth," the meaning of what you're saying is being changed, etc, that's always a red flag.

Be wary of editors who gaslight, too. For example, if an editor is insisting you "kill your darling," but not explaining the reasoning behind removing a passage or idea that you're very attached to, don't let them brush you off.

Editorial gaslighting, to me, are statements designed to dismiss your concerns ("all writers have to kill their darlings/make sacrifices/get deeply personal"). If it feels coercive ("you should...") rather than collaborative ("what do you think about..."), it's a red flag.

Some editors become so focused on telling the most sensational story, they will try to talk you *away* from your concerns, rather than directly addressing your concerns. And those are the editors I would especially encourage folks not to work with.

That said, I have worked with writers who just... didn't want an editor. It's important to be self-aware and know if you're actually READY for feedback, too. If you come in with resistance, an editor will notice. Writers are not good at hiding that like... ever.

If you are *very* attached to a piece and struggling when asked to change even minor things, it might be you. Sometimes, we're just invested in our pieces exactly as they are! And that's okay! Just consider posting it as a blog post or self-publishing somewhere instead.

When it's clear to me that a writer doesn't want my feedback — they're more interested in being published as quickly as possible, and believe they don't NEED feedback — I'm unlikely to work with them again, because they didn't actually want to work with me in the first place.

The tl;dr version: You have a "good" editor when you feel good during the editorial process! "Good" is subjective — it's more about the fit of that relationship. Don't be afraid to pull your piece and look for something better if your gut is telling you it's not the right fit.

What's nice about social media is that I find it's a really good barometer for what to expect in the editorial process. So if you like how an editor interacts with their writers on Twitter, or the posts they make on Facebook, it can be a glimpse into their editing style.

And I want to make sure you know, too, that it's okay to just push writing out because you need to get paid. So sometimes that DOES mean plugging your nose through it and working with folks you're not as keen on. That's valid! It's valid in any profession. You get to decide.

I think that covers just about everything I was asked! If you have more questions though, feel free to reply to the thread, I'll try to answer! 🌸

Just remember: You deserve to be proud of your work. If an editor makes you feel otherwise? You're allowed to cut them loose.