In continuing her record of seeing the future, @MichellePhan launched her own lo-fi inspired YouTube Live radio station in June. Right now, it acts as a distribution channel for her licensing startup Thematic's catalog, but I believe we'll see more of this  https://www.youtube.com/watch?v=Q3sbv9Y0jCk …

Variety covered this, featuring some comments from her.  https://variety.com/2019/digital/news/michelle-phan-relaunches-youtube-channel-music-1203230812/ …

YouTube's lofi hip hop and chillhop streams are something really interesting. They generally outperform all other YouTube Live streams. They're simply a lo-fi inspired radio station playing over an anime GIF. It's a simple recipe. They shouldn't really exist in the Spotify era. 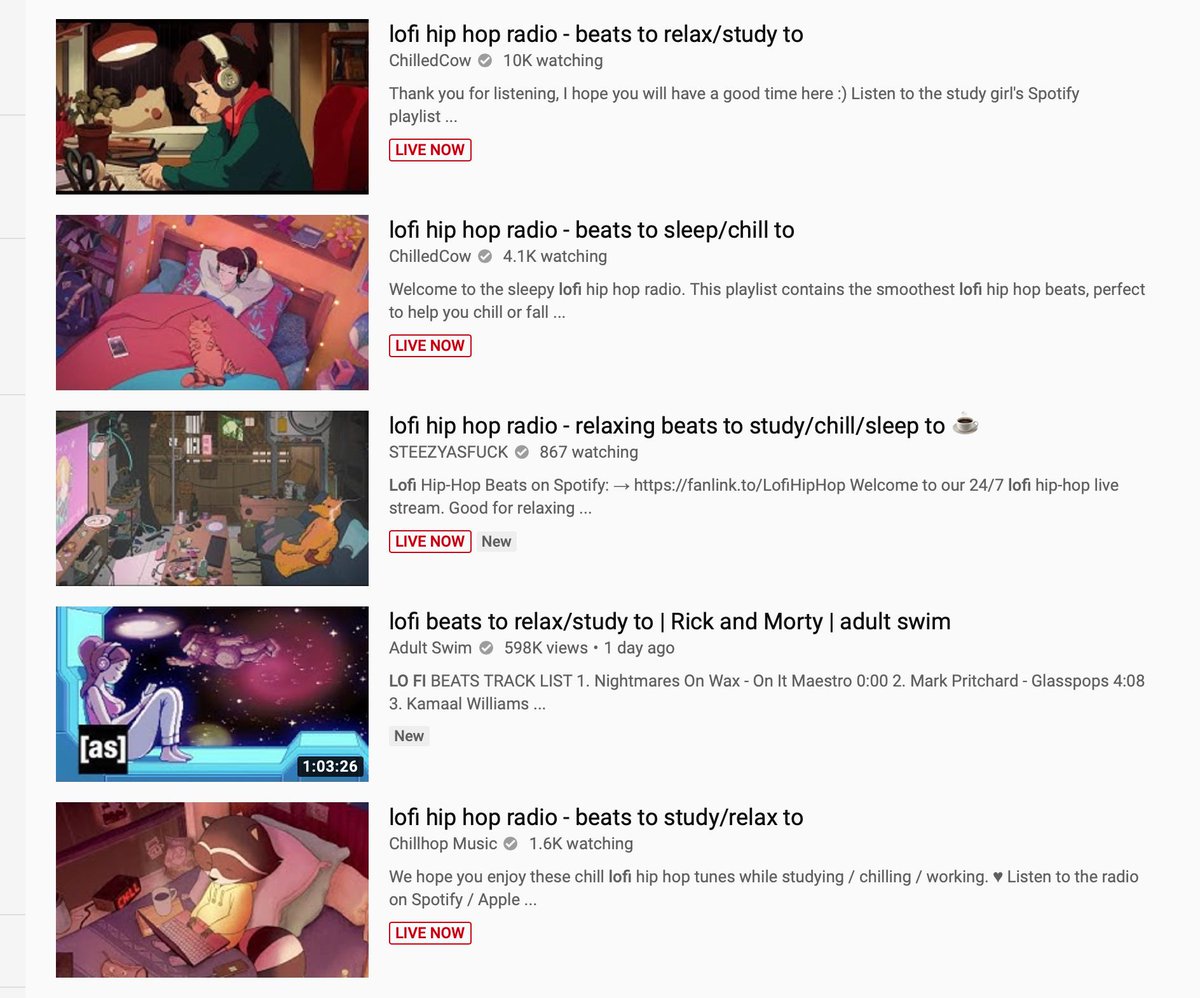 The inspiration for what became YouTube's chill streams can be traced back to a few places. One of them is Adult Swim's bumps. They were a transitional element used to fill airtime and create the channel's early-2000s late night culture. An homage to MTV.  https://www.youtube.com/watch?v=Pj9jKTaVeSU&list=PL7EEFE1C53A557C4A&index=6 …

Just this week, Adult Swim uploaded a Rick and Morty inspired lofi compilation. They captured the world well — even the title blends in with the thousands of VODs across YouTube. It was in homage to their bump history, and the culture they helped curate  https://www.youtube.com/watch?v=_fVjJmX2GYs …

Adult Swim is now in fun competition with the lo-fi kingmaker ChilledCow. There's a lot of nostalgia out there for bumps. They truly understand their roots and audience. 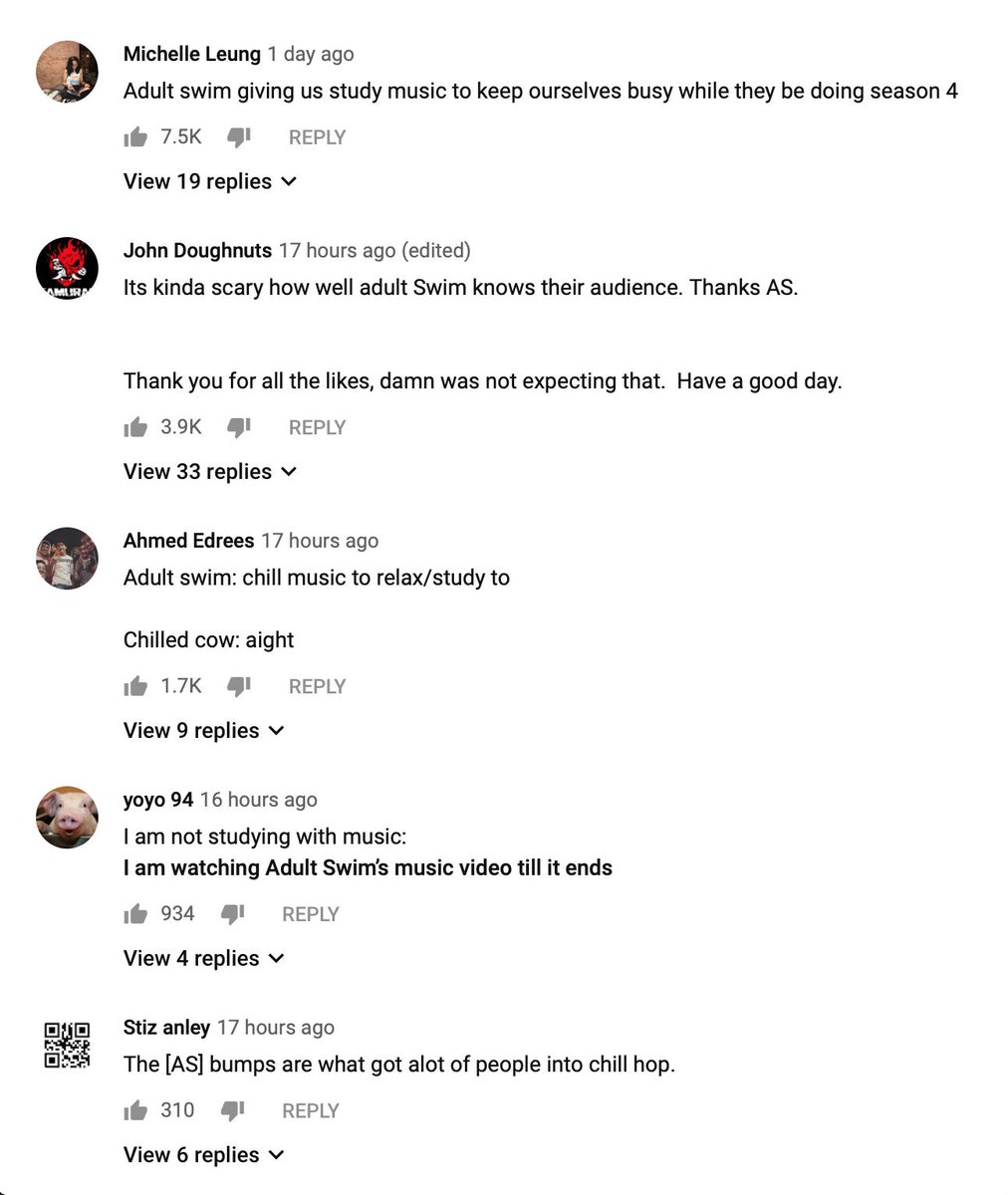 This great piece dives into some of the young people behind the scenes of these streams and compilations. All of these competitors kind of just arrived on the same thing — and the lonely, grungy studying anime characters just stuck.  https://www.nytimes.com/2018/05/03/arts/music/youtube-streaming-radio.html …

This scene emerged fairly organically in 2014 and 2015. There have been study and work compilations on YouTube forever, mostly EDM. But the dynamics of YouTube changed around 2015. Twitch was emerging. YouTube Red appeared. The YouTube algorithm began to emphasize watch time.

YouTube Red meant more watch time was worth more revenue. The economics of YouTube changed. It was a volume game now. The emergent vloggers of this era dropped hour long vlogs daily. It was a cyclical force: the more watch time, the greater algorithmic boost in Recommendations.

Following Amazon's 2014 acquisition of Twitch, YouTube believed it would face its first real competitor. It was only a matter of time before streams became vods. It doubled down: the algorithm began to overemphasize live, long content. From the platform oligarchy, Lo-fi was born

At least, it emerged here, in this new medium. Lo-fi has roots in Japan, in anime, and in those inspired by this emergent counterculture

I wrote about how the memeing Twitter chief Lil Nas X captured some of these feelings in his EP and single C7osure. The internet kids get it — they are lo-fi's audience, after all.

In this era of compounding media, bandwidth waiting to be filled, and an ever-growing number of new songs and algorithmically inspired videos and shows waiting to be streamed, I think a lot of young people are lost — overloaded, just bored. Culture is flying too close to the sun.

On Tuesday, social media dark patterns and imagery of dopamine slot machines were introduced to Congress in an aggressive bill. On Wednesday, Fox Business described videos games and esports as heroin. What if the real threat isn't addiction? What if it's the boredom in abundance?

This is where I think a lot of young people are today. The problems may not be in habitual notification bells & likes — they may be in an explosion of culture. On the infinite horizon, everything disappears into the background. Cultural interests are becoming cultural exhaustion.

As data and culture accelerates, it's the little inclinations of synchronous presence and control that are rejuvenating. Maybe it's just a nostalgia of captured, meaningless attention. Or maybe it's self medication.

As Ninja announced a groundbreaking exclusivity deal with Mixer yesterday, the news rippled through his offline, now-unpartnered Twitch chat. His whole community pressed F to pay respects. The screen was black. The community was still present.

When I discovered Michelle's lo-fi stream, I watched 43 users introduce themselves and wish that their favorite creator would come back to YouTube. While the anime loop and chill music played, chat users came and went. But the community was there, present. 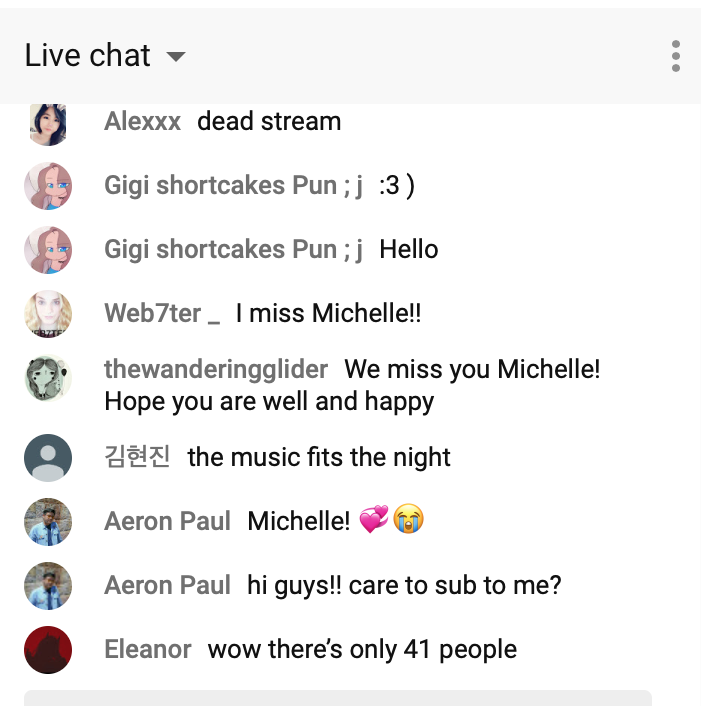 This was a corner of the Internet sheltered from mass consumption. The counterculture displayed in the grungy mid-2000s anime and the music it inspired was present here. While they studied or chatted, they were here — maybe so that they could escape the gravity of everywhere else