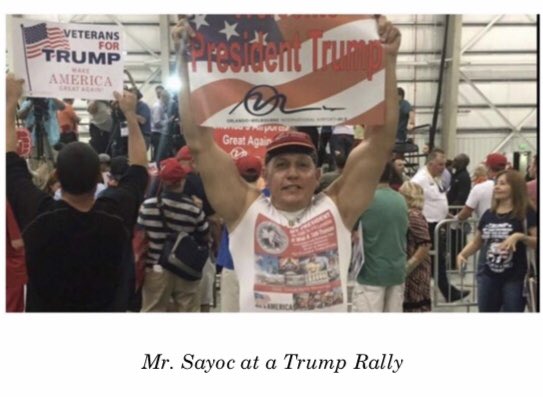 Prosecutors have described Sayoc’s spree of mail bombs as a “two-week terrorist attack.” 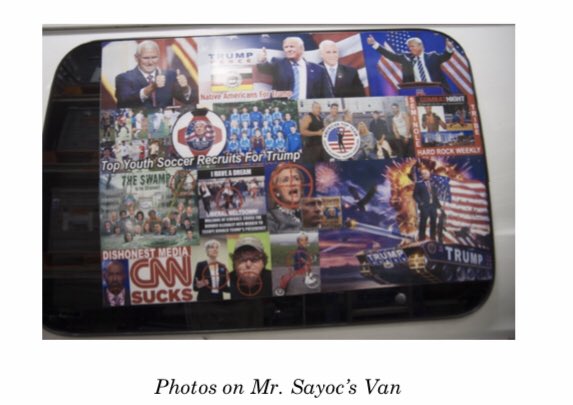 Sayoc sent mail bombs to two CNN newsrooms and has said: “The Press is enemy,” echoing Trump’s slogan the “enemy of the people.”

The proceedings will start at 2pm, and I will tweet out context in the lead-up to it. 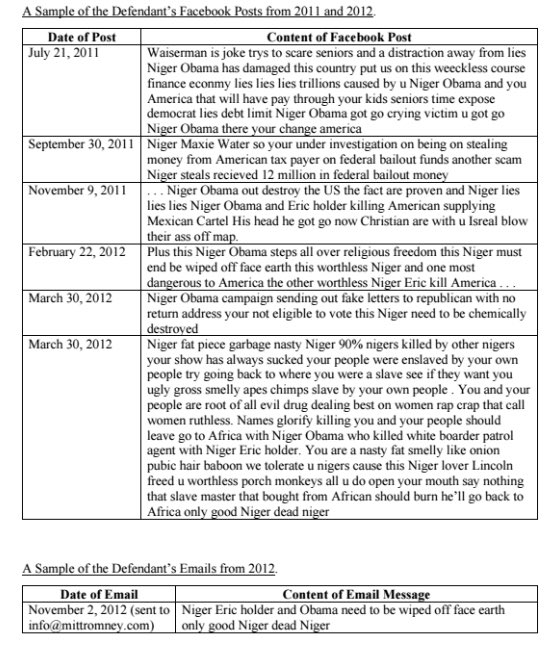 A reader reacts to my publishing a list of the recipients of Sayoc’s bombs.

Thanks for reporting, all.

Returning to the feed soon.

Almost 30 minutes to the sentencing.

In their most recent brief, prosecutors responded to Sayoc's claim that these were "hoax" bombs by highlighting his admissions to the contrary.

Here is the prosecution's passage on his "domestic terrorism" aims to "silence public discourse and chill civic participation." 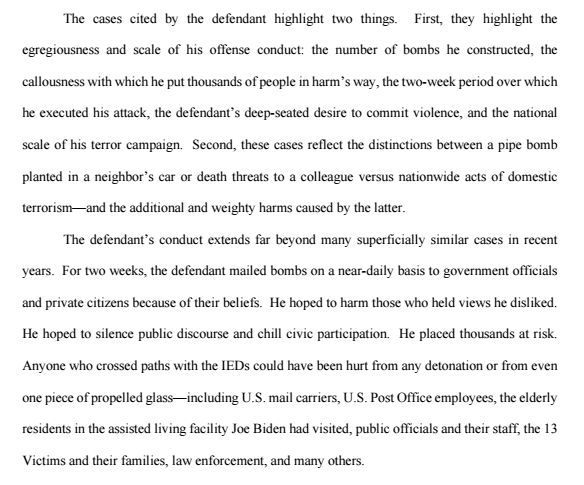 The prosecution's reply brief is here:

It responds to the defendant's brief here:

The El Paso massacre is being investigated as a domestic terrorist attack in connection with an anti-immigrant screed on 8chan.

My newsletter this week previewed today's sentencing. Also: More on Epstein, the DNC's defeat in its election-hack suit, and other news.

Also be sure to subscribe to @CourthouseNews' "Nightly Brief."

He quips he "hopes the angels are listening" to the U.S. sentencing guidelines.

(The judge also notes he's not bound by them.)

"It would not have worked with the design the individual put in those bombs," he said.

Finnerty says that the bombs were handled by robots at the FBI's Quantico laboratory.

Dale Mann, another expert, sworn in for testimony.

Judge Rakoff asks him whether he agrees that the bombs had a remote chance of explosion.

"Only in the broadest sense," Mann replies.

Mann describes "inert materials and energetic material," and adds that the ones in these bombs were "negligibly reactive."

Rakoff, who received his J.D. at Harvard, notes that Pope is a fellow alum.

"But I will disregard that," he adds, to laughter in the court.

They move onto Sayoc's steroid use.

Pope: "The nature of the effects that he described has a characteristic, stereotypical quality that I have witnessed numerous times," from hard steroid use.

Neither party questions the witness.

Dr. First opines that Sayoc had from a "severe" disorder marked by predisposition to be paranoid, disconnected and impulsive.

Asked by a defense attorney whether he could be safely released if not sentenced to life, First says that he could if he could be treated.

Sayoc's counsel Ian Marcus notes his family is in the courtroom and calls for a light sentence.

Rakoff interjects: "He created, did he not, a climate of fear and terror going on day after day for several weeks?"

Rakoff respond to the defense argument that the 57-year-old won't be a threat after he leaves prison.

"I'm not sure I understand the argument about age," he says, noting he committed these crimes well into his 50s.

Sayoc's counsel responds: No matter what, he's going to be in prison into his late 60s.

He adds social science supports that threat declines with age, as recognized by the First Step Act.

Rakoff: "Forgive me, but that does not seem to fit his profile," referring to Sayoc.

Marcus elaborates on his client's prior arrest in 2002 for threatening to blow up an energy company.

Everything in his life prior to this offense resulted in no jail time, the attorney noted. He never even needed to admit to his guilt in these offenses.

He was more vulnerable when his child left the family when he was young.

He was sexually abused over a year.

"In particular, the books with Donald Trump really resonated with him," he said.

Marcus on his client Sayoc:

"He's using these self-hope books to cope," and he becomes "obsessed" with Donald Trump, buying his branded suits and ties.

"He slowly became deranged by it," Marcus says, referring to Sayoc's response by the misinformation.

Marcus: "We believe that the President's rhetoric contributed to Mr. Sayoc's actions in this offense."

Marcus says he understands why the DOJ has avoided this topic, noting that they report to the executive branch.

Rakoff cautions about linking the two: "Correlation and causation are two very different things as the cliche would have it, and very correctly so."

Marcus responds that the president's rhetoric resonated with Sayoc deeply because of his client's mental illness.

Rakoff presses the attorney on the other sentencing considerations beyond motive, like deterrance: "Assuming everything you just said, how far does it go?"

Marcus responds that "10 years is not a slap on the wrist."

Sayoc's attorney on the bombs: "It was scary, and this was serious," but nobody was killed and injured and they wouldn't have detonated.

He says if you get a zero on a test, you're trying to get it wrong.

Rakoff: He tried to send a "torrent of fear" across the country.

Marcus: "He wasn't thinking rationally." He was a man sitting in a van living alone.

"The tears of regret flowed freely," he adds, calling his client a "different person" today.

"This is a man who is willing to get help. He wants it. He needs it."

"So altogether we're asking for a 121 months. The guidelines are not appropriate here."

Prosecutors are now up:

She starts going through a timeline listing all of the mailings and receipts of the bombs, with Sayoc "reveling" in the national headlines from the attacks.

Going through the 16 pipe bombs recovered across the country, Kim says: "The defendant's campaign of terror was national in reach and extremely serious."

She notes that the defendant's request amounts to less than a year in prison for each of these pipe bombs.

She also notes that if Sayoc intended them to be "hoax" bombs, he could have packed them with sand instead of glass and explosive materials.

"Even if the likelihood of explosions were remote, these IEDs were still dangerous," she says.

Rakoff presses the prosecutor on testimony by the government expert earlier in the hearing that these were not likely to detonate.

Rakoff acknowledges that the materials in these bombs were obviously not packed "lovingly," but points to other expert testimony that firecrackers and chlorine mailed commercially across the country.

He presses on Sayoc's intent.

Rakoff interjects that this foreknowledge may suggest he knew how to make a working pipe bomb.

Kim: "These may not have been the most sophisticated bombs, but they did pose a danger," including the postal workers.

"This was not a whim or reaction in one moment in time," she says, referring to it as a longtime record of hate.

Rakoff: "I think on the one hand you're right that like 99.9% of the defendants who appear before me, he has excuses and justifications for aspects of his conduct."

"On the other hand, I'm not particularly impressed by the defense arguments that he's now incredibly remorseful."

Rakoff calls the issue a "sideshow."

Kim: It's important for this court to send a message to the public that this sort of conduct is unacceptable.

Rakoff notes that's the principle of general deterrence and presses on "specific deterrence," i.e. would Sayoc be safer if treated.

Kim: "There are many, many people in this country who use steroids."

This is the first one, she notes, that she is aware of where one commits "a terrorist attack using 16 IEDs."

"We think that is extremely harmful to the public and to the country," she says, adding it warrants a life sentence.

Instead of the defense replying to government argument, Dr. Pope returns to the stand to rebut the prosecutor's remarks on steroid use.

Sayoc: "I am beyond so very sorry for what I did. I am forever thankful to my superwoman mother."

He goes through a list of other family members.

"I am so very sorry for what I did and what I put you through."

Sayoc: I prepared my speech in writing because I knew that I would be emotional... I had a very hard time in life after my dad left me... and after being sexually assaulted at a Catholic boarding school.

Sayoc: "Now that I am a sober man, I know that I am a very sick man... I know I should have listened to my mother, the love of my life."

"I wish more than anything that I could turn back time and take back what I did."

"I feel the pain and suffering of these victims."

Judge Rakoff takes a 10 minute recess before pronouncing the sentence.

He begins: "In a nation like the United States, that rightly places such a strong value on individual autonomy."

Rakoff notes that the federal guidelines call for a sentence that's "sufficient but no greater than necessary."

"If any of us had the misfortune to face sentence, who would we want to be sentenced by?" Rakoff asks, a judge looking at generalities or the specific facts.

Rakoff: The bombs were designed to strike "fear and terror" in the hearts of the victims.

Rakoff: In at least three of the victims -- Biden, Clinton and Soros -- the bombs were sent to personal residences, sending the message that no one was safe.

"Just, so who is the human being who perpetrated these horrific acts of domestic terrorism?"

Rakoff notes Sayoc was abandoned by his father, sexually abused by his teachers.

He later became a petty thief and made a verbal threat to his energy company, an act the judge notes in hindsight may be viewed as "a portent for worse to come."

Though not legally insane, Sayoc became "obsessive" and "paranoic," he notes.

"Does any of this matter?" Rakoff asks, referring to "unfortunate circumstances" leading up to his crimes.

Rakoff: A defendant's intent is as important as his actions.

"That does not mean that we can ignore for one moment a defendant's actions and its consequences."

Rakoff: "The issue that's most in dispute in this case" is Sayoc's intent, that is, did he intend to kill and/or maim his targets, even if the chance was remote.

Was Sayoc a "careless or unskilled pipe bomber," or try to intimidate them?

Rakoff finds that Sayoc "was fully capable of concocting pipe bombs capable of exploding," and since he didn't, Rakoff believes that was "in the court's view, a conscious choice."

Rakoff calls that sentence "no more" and "no less" than what he deserves.

Sayoc's counsel ask for him to incarcerated in Florida and be enrolled in residential drug treatment.

Rakoff agrees to recommending the former, not the latter, saying he won't make his sentence any lighter.

The sentencing is over. Look out for the story soon @CourthouseNews.

Some context for Rakoff going far below sentencing guidelines:

Rakoff is one of SDNY's most vocal opponents of mass incarceration in the United States, even as he emphasized repeatedly throughout his sentencing that Sayoc had been engaging in terrorism.  https://www.businessinsider.com/judge-jed-rakoffs-simple-explanation-for-americas-mass-incarceration-2015-4 …

Just a note: I've been interviewing academics and researchers on U.S. domestic terrorism, particularly attacks linked to white supremacy. More on that after the dust settles on the live courtroom coverage.