I think Google is an amazing company, filled with wonderful, caring, thoughtful people who want to do the right thing for their business and the world.

That's why I think they should be PISSED OFF when their leadership lies to Congress and the American people. /1

I don't say this lightly. @davidcicilline asked Google a straightforward question and got BS responses. So his office sent a written request for more details. Here's how Google responded.

This is intentional obfuscation. It's misleading. It's not an answer. It's a lie. /2 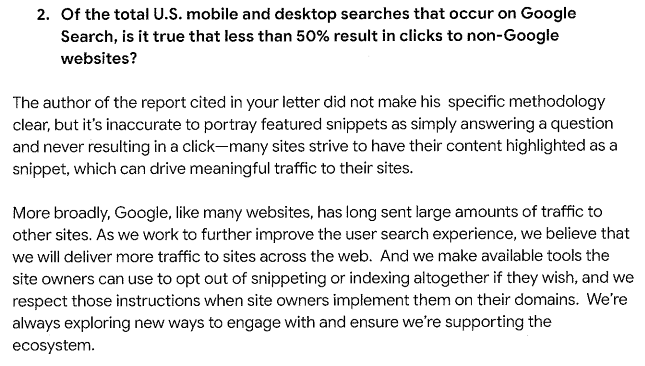 Let's break it down:
A) Congressman @davidcicilline did not ask about a study. He asked about where clicks go. Google refused to answer.
B) In the "answer" they did give, they say the author (me) did not provide methodology in my report ( https://sparktoro.com/blog/how-much-of-googles-search-traffic-is-left-for-anyone-but-themselves/ …). That's false. /3

C) Google's responses irrationally focuses on featured snippets for no discernible reason. There are dozens if not hundreds of features in Google's results that bias searchers not to click non-Alphabet-owned properties. The misdirection is so blatant it's embarrassing.

Honestly, if I were a Google shareholder or employee I'd be angry not only because this is ethically wrong, but b/c it's so potentially damaging. We KNOW the DOJ & Congress are investigating Google. Why risk angering the folks who are deciding whether to fine/regulate you? /4

There's only one conclusion: the truthful answer to @davidcicilline's question is "Yes. Less than 50% of searches result in a click to a non-Alphabet website."

And Google's embarrassed to reveal that. FWIW, I don't think they should be. It's OK to solve searches w/o a click. /5

They could add: "But, we still send more traffic than ever before to non-Alphabet websites, and more than anyone else on the web."

I hope for more honesty from them in the future. I want to unabashedly cheer for Google again. /6