(Thread) How to Make the Radical Right Less Dangerous

Miller-Idriss explains white supremacy and what drives the shooters.

Psychologist Stenner (author of the Authoritarian Dynamic) explains how to make them less dangerous.  https://www.karenstenner.com

What we call white supremacy includes the belief that whites face an existential threat.

The Great Replacement theory holds that whites will be replaced by immigrants or "others."

2/ Other white supremacists believe there will be a white genocide.

They use the Native Americans as a cautionary tale, and say whites will end up on Reservations.

3/ They believe there will be an apocalyptic race war. At the end, a new world order will emerge, and the white race will be saved.

They seek to hasten this conclusion by (called "acceleration") by creating societal discord through violence.

4/ They are thus trying to increase the polarization to get everyone fighting.

Recall that “Get the fighters fighting and keep them fighting,” was #1 when I laid out the 4-part plan for destroying democracy and strengthening oligarchy⤵️

5/ They’re also on Twitter, by the way, trying to stir up discord and get the liberals mad enough to engage in destructive behavior.

White Supremacy is global. “Eurabia” is an Islamophobic conspiracy idea Europe will soon be Islamic-ruled.

Here's where Putin and pals come in.

6/ Their goal is to sow discord, disinformation, and doubt.

The more discord, the better. A second American Civil War would be Putin’s dream come true.

The desire for civil violence in America is one reason Russian oligarchs pump money into the NRA.

7/ Prof. Miller-Idriss stresses that the radical right is reacting to demographic and electoral shifts of the past few decades.

8/ It was clear from angry people who called into the show that they believe the racists are on the other side.

They think they're fighting racists.

Why, they ask, isn't it racism when a white person is the victim, and the attacker nonwhite?

10/ Miller-Idriss explained that she was talking about the extremists, not all whites. She also explained the difference between ordinary crime and radicalized terrorism.

But it didn't seem that the callers understood her. They believed all whites were being maligned.

11/ Miller-Idriss also said it’s clear that Trump (and others) use language that “reinforces” and “legitimizes” the white supremacy conspiracy theories.

Thus here is our situation:

💠The U.S. President is “reinforcing and legitimizing" these same fringe extremists.

13/ Statement of Truth: Civil War is bad, and best avoided.

We need to counter these effects by taking steps to reduce polarization and bring down the heated rhetoric.

15/ Authoritarians value sameness and have an intolerance of “difference” and complexity.

But "using 'racist' as a shorthand to describe authoritarians
is inadequate." (Quotation from the article)

It also obviously increases the polarization.

They see matters simply: They believe there’s a “true America” being undermined by minorities and “political dissidents.”

17/ Stenner’s research shows that about a 1/3 of the population is born with an inclination toward authoritarianism.

She says they're wired that way & can't be "educated" out of their disposition.

They're also a significant (and potentially dangerous) part of the population.

18/ Karen Stenner says that we can minimize the fears of authoritarians and make them less dangerous by talking about how we are all similar.

19/ Obama knew how to do it, which explains some of his talent as a politician.

After essentially saying “out of many, one” . . .Obama then⤵️

"No one better anticipated today’s societal divisions than the political psychologist Karen Stenner, author of the 2005 book The Authoritarian Dynamic."

Fortunately, she also has ideas for decreasing the danger posed by authoritarians gripped by fear. 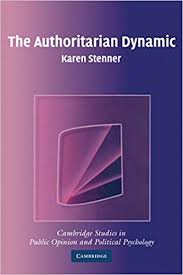 I have the wrong link for Karen Stenner.

That one was weird.

Sigh. And I should have been tagging @milleridriss all through this thread.

When my list of corrections is almost as long than my thread.

Trump retweeting this makes no sense: Bill Barr (AG) and the Federal Bureau of Prisons report to Trump . . .

Trump's in charge of the executive branch.

But lies don't have to make sense.

Some people believe will them anyway. Others joyfully spread the lies, knowing they're lies.

Because lies are destructive and they want to destroy. See my article ⤵️
https://slate.com/news-and-politics/2018/10/trump-lies-kavanaugh-khashoggi.html …

All my threads are also blog posts. You can view this one here:  https://terikanefield-blog.com/how-to-make-the-radical-right-less-dangerous/ …