Bad news: He will up the ante on the racism, xenophobia, and hate. The white supremacists will get more desperate.

In other words, things will get worse before the election.
https://www.nytimes.com/2019/08/05/us/politics/trump-campaign-facebook-ads-invasion.html …

They are roughly the same. 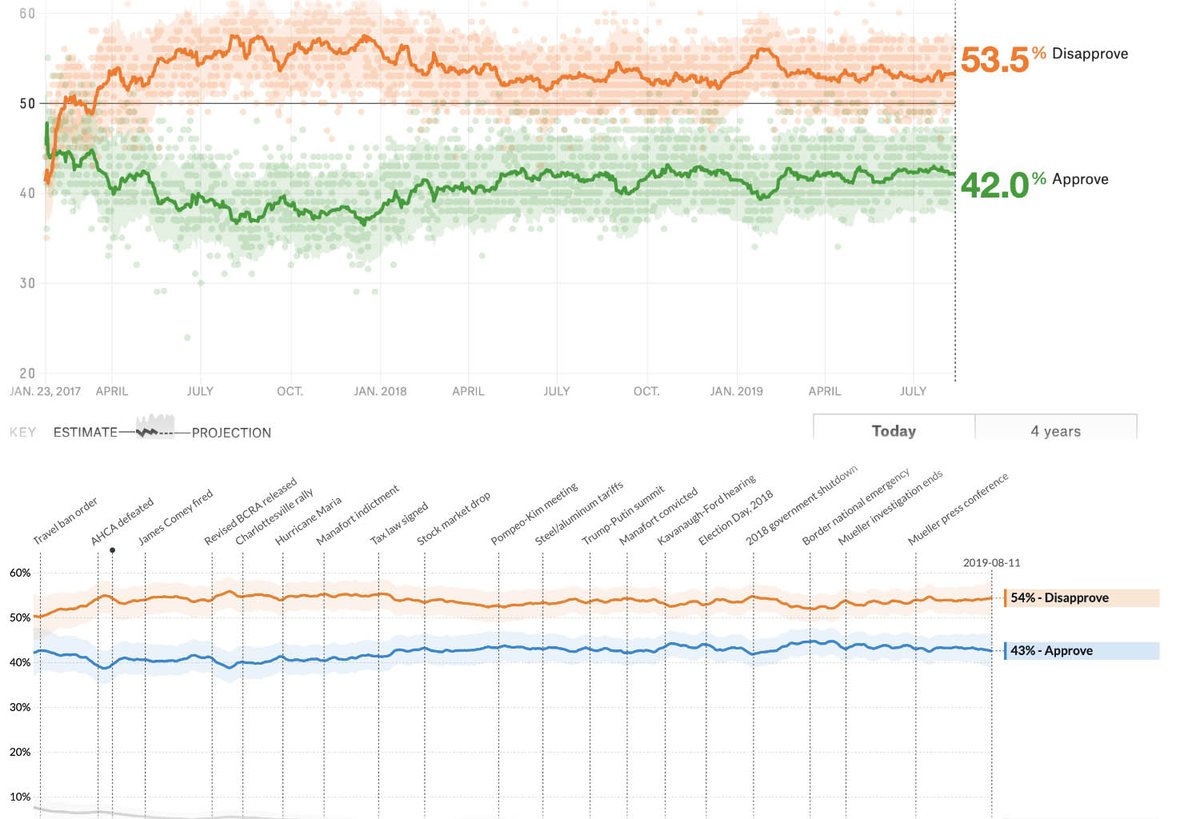 There is talk (in Texas!) of Texas turning blue. 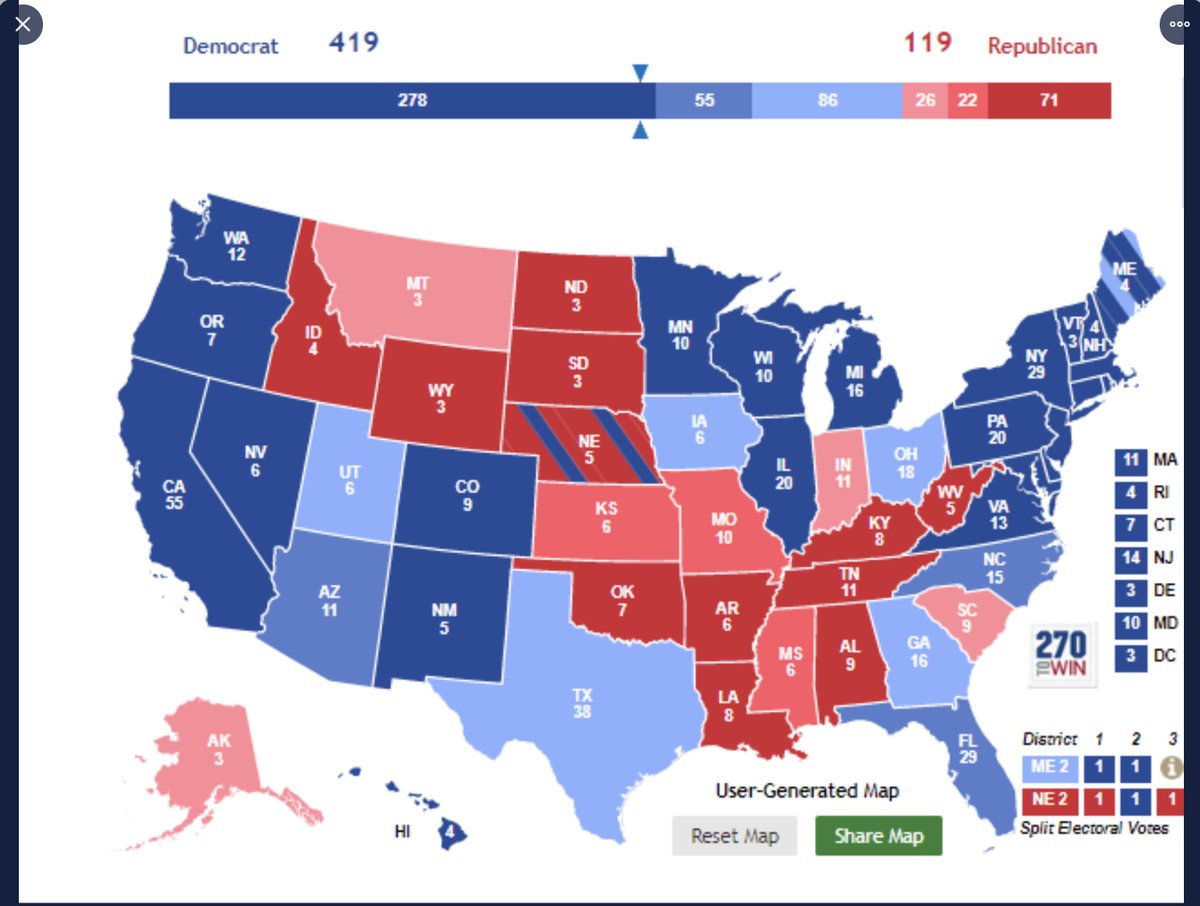 This is no surprise. The Dems won in the midterms by 8 percentage points. Matching that in 2020 would be a bloodbath.

The numbers are now worse for the GOP.

4/ Trump's strategy is cynical and dangerous—but smart (in an evil genius sort of way).

5/ @FrankFigliuzzi1 suggested that the GOP should put a stop to Trump’s dangerous behavior.

(That thump was the sound of me falling out of my chair. Seriously? Who thinks that can or will happen?)

Reading the Twitter feed of @GOPChairwoman Ronna McDaniel or listening to. . .

6/ . . . Congressional GOP in the Mueller hearings should disabuse anyone of the notion that the GOP can—or will—reign Trump in.

What remains used to be the fringe.

The GOP is desperate. They can see that their base is shrinking. Their demographics is aging. They can read the polls.

8/ So for the GOP this isn’t politics as usual.

Losing the election—given the changing demographics of the nation—will be the end of them as a mainstream political party. They understand that.

This is their last gasp.

9/ If you wonder what they'll will do when desperate, you can stop wondering. They’re doing it now:

Up the ante of racism & xenophobia, and lie big.

Trump’s campaign used facebook ads to amplify his claims about an “invasion” of brown-skinned immigrants.
https://www.nytimes.com/2019/08/05/us/politics/trump-campaign-facebook-ads-invasion.html …

Trump’s only hope of winning in 2020 is to up the ante. Create strong emotions. Enrage his critics and thrill his supporters.

11/ If he tones it down, he will definitely lose. The 54% who disapprove of him will not suddenly change their minds if he stops saying horrifying things. If he stops bashing norms, his base will lose their enthusiasm.

💠Keep the fighters fighting. (This includes getting the Dems to turn on their own leaders. "It's all Pelosi's fault!"
💠 Bash rules & norms
💠Suppress the vote by making people NOT WANT to vote.

13/ Bashing rules and norms helps keep everyone fighting. It:

💠Increases polarization,
💠Makes Democrats more likely to blame their own leaders (why is Pelosi letting this happen?),
💠Encourages his critics to engage in destructive behavior. . .

💠Wears down democratic institutions so that if Trump does pull out a win in 2020, it will be easier to raze them completely,
💠Persuades people that the Democrats won’t have a chance up against people willing to cheat and take foreign help. . .

15/ All of this discourages people so that they're more likely to give in to despair and give up (It's hopeless! Why bother?")

Read this for how the 2016 online campaign suppressed the black vote by making them not want to vote:
http://soba.iamempowered.com/2019-report

16/ Angering & discouraging people so they don't want to vote is easier and less costly than manually flipping votes or hacking computers.

What can we do?

Stop being shocked. From @TimothyDSnyder: “Being continually shocked is a luxury. It’s pre-helpless”

17/ Understand that the GOP is acting from desperation.

Grass roots politics keeps tactics like this from working:
https://www.nytimes.com/2019/05/06/us/russia-disinformation-black-activists.html …
Lack of grassroots politics makes people vulnerable to this kind of online attack.

18/ This is why rage tweeting, which spreads despair, is not productive.

Trump is an expert at manipulating us. He wants all that rage tweeting and despair.

The antidote: Get involved with local grassroots political organizations to help inoculate your community.

All my threads are also blog posts. You can read this one here:  https://terikanefield-blog.com/good-news-bad-news/ …