North Carolina Republicans literally ordered data on the types of IDs that black voters were disproportionately less likely to have & made it so only those types of IDs satisfied their voter ID law requirement #NCpol  https://www.washingtonpost.com/news/wonk/wp/2016/07/29/the-smoking-gun-proving-north-carolina-republicans-tried-to-disenfranchise-black-voters/?utm_term=.48055ba73720 … 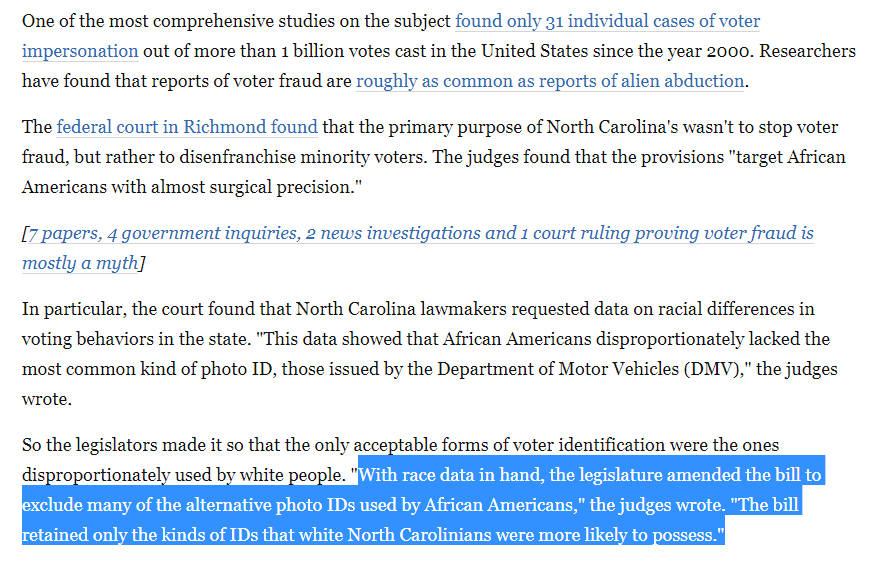 If Trump's & the GOP's concerns over voter fraud were actually in good faith, this could be a reasonable compromise, but we know they operate in bad faith. Voting rights advocates often make a point of noting we aren't against ID itself but that ID is often burdensome to obtain

Agreeing with @ElectProject, I'd like the federal govt to issue a free national ID card that counts as voter eligibility without even NEEDING registration at all (you'd show the card with your residency + eligibility status & you can vote) but Republicans have no interest in that

Agreed. I worked on a volunteer program in college to help people at the margins of society, & lack of ID was one of many problems they faced when trying to get housing/banking/employment. It's absurd our national govt doesn't issue an ID to everyone born in the US (& immigrants)

Exactly. Reporters like @AriBerman have shown how some individual citizens simply can't obtain the documents they need to vote, & activists like @votermolly & @KatCalvinLA work to get citizens the IDs they need to vote, but it's just not enough against state-sponsored suppression

And I'll note that, while the evidence about the partisan impact of voter ID laws is still very mixed, we know unequivocally that many GOP lawmakers have passed these laws because they believe it will suppress Dem/POC voters. That in itself is a gross violation of democracy

This tweet, take it for what it's worth 👇. I'll note that despite not having ironclad evidence on the overall impact of voter ID laws & how widespread their effects are, individual-based reports look a whole lot like this. & that's still very messed up:

As for voter ID law research, it's very complicated, & here are some papers. But what's clear is that these GOP-backed laws needlessly discriminate against certain individuals regardless of their wider effects, & that's simply wrong  https://www.nber.org/papers/w25522   https://fivethirtyeight.com/features/what-we-know-about-voter-id-laws/ …

This is also noteworthy. Some state Republicans have tried to hide their voter ID laws’ racist & partisan intent by saying they’re merely trying to bolster voter confidence, but even that is completely bogus