This thread and the responses got me thinking about the direction of the Dem primary, at least if present trends continue. It's Sunday morning, so let's engage in some wild speculation about stuff like a brokered convention, and the possibility of a Warren/Harris ticket. /1

A sizeable, stable portion (45%-50%) of Democrats prioritize electability over candidate preference. First pic here is a Quinnipiac poll from March 28. Second two pics are August 6. And the more engaged a Dem is, the *more* they prioritize electablility and support Biden. /2 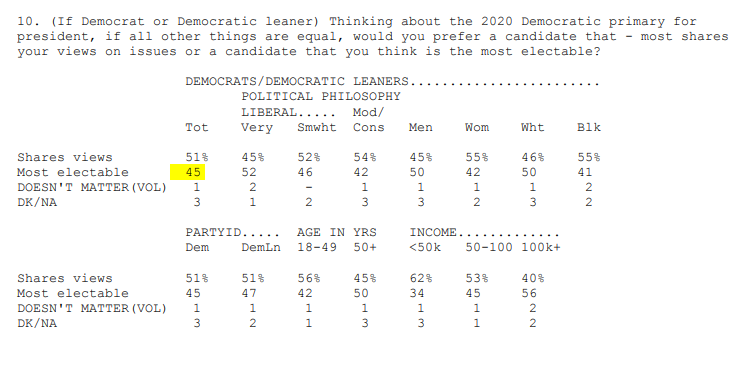 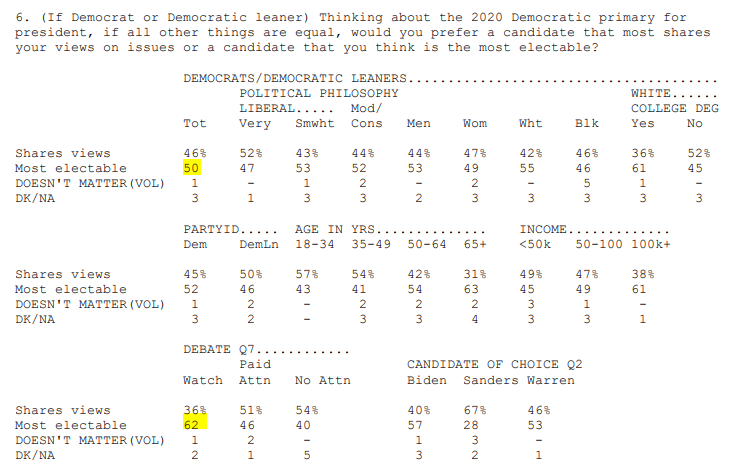 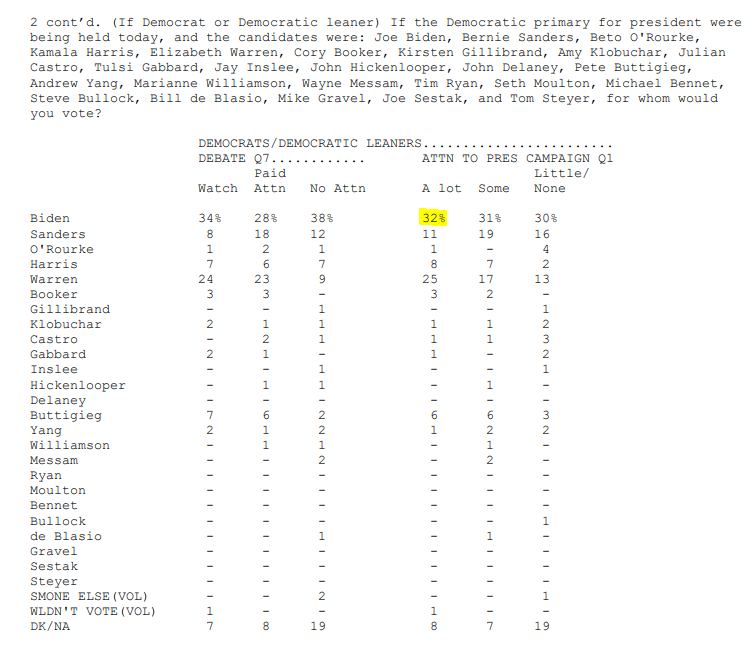 Biden got a 2-3 week honeymoon, then his inevitable Bidening cost him, and Sanders rose again.

I interpret these as shifts in "electability" Dems. /3 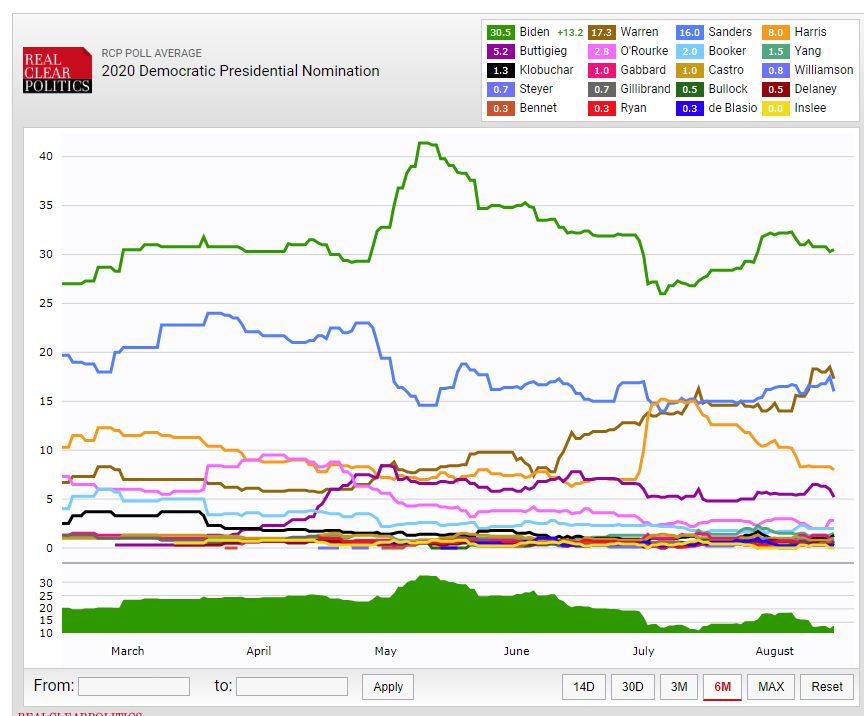 Here's a more recent poll. Only 10% of Sanders supporters cite "electability" as the most important factor. I suspect it'd have been much higher before Biden entered. Notably, 16% of Biden supporters put Sanders as second choice, which makes no sense ideologically. /4 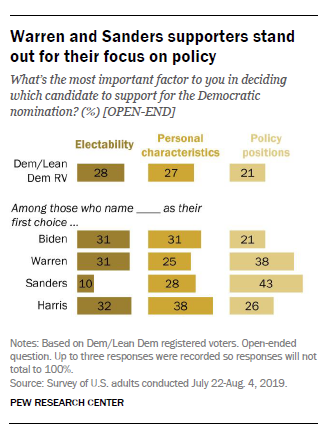 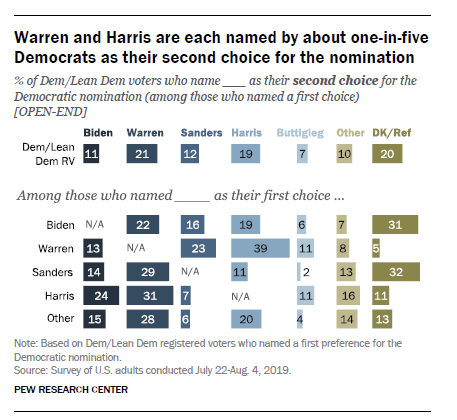 Sanders is generally popular and will remain so. And while he might have a ceiling on post-Biden national Dem polls (say, 20%), he also seems to have a floor around 15%. Under the DNC rules for 2020, that's the magic number to be awarded delegates. Bernie will get delegates. /5 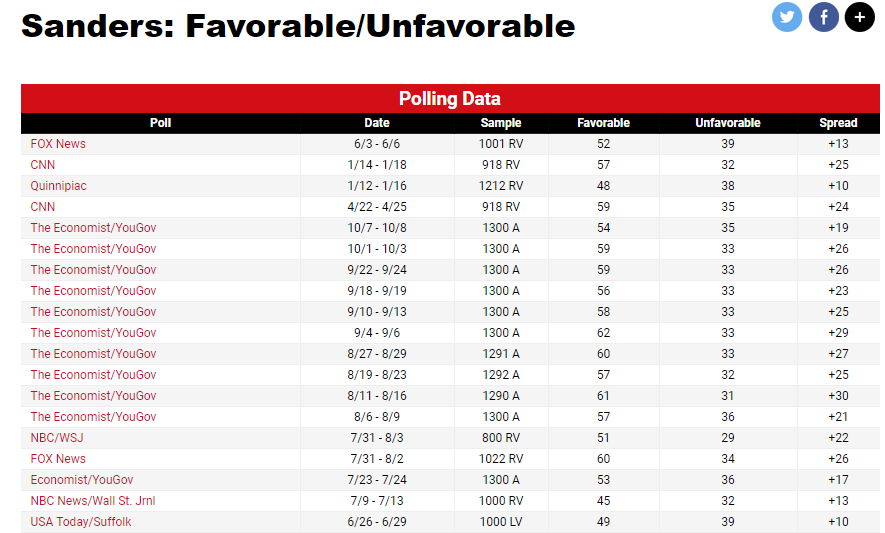 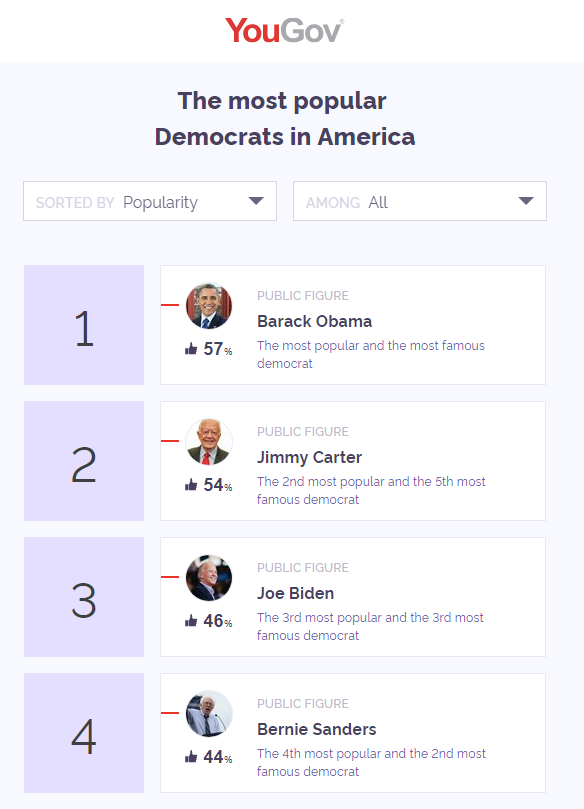 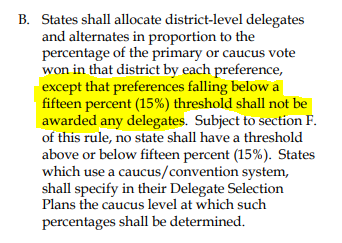 One problem ahead is that Sanders supporters are the grumpiest of all Dems / Lean Dems: they're the least excited for other candidates, with the most not knowing who they'd even pick as a second choice (32%). 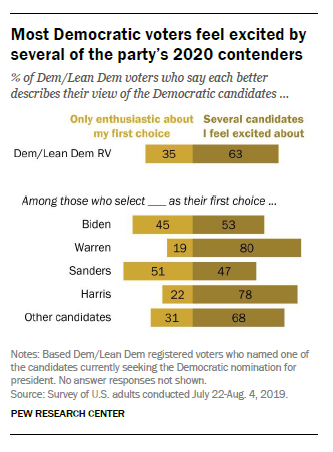 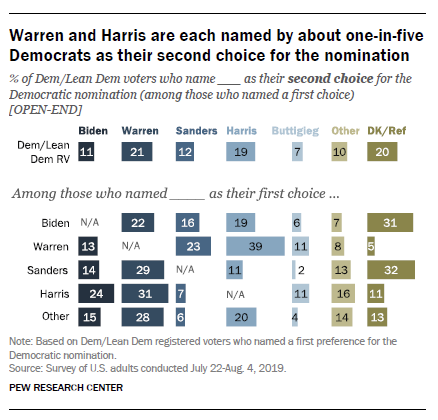 One interesting finding from Pew is how soft electability might be as a factor. If you ask Dem / Lean Dem what they prioritize as an open-ended question, rather than as an either-or, only 21% say electability.

And they really like Warren and Harris as second choice. /7 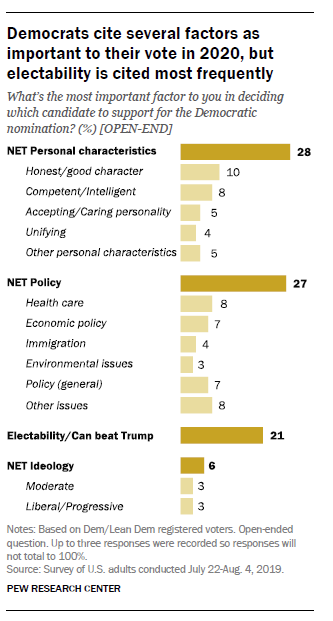 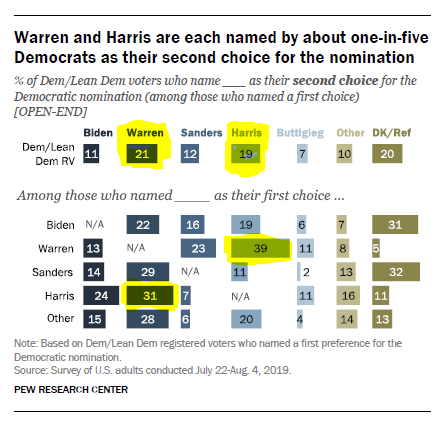 Despite the weird hostility that some Sanders supporters show Warren and Harris supporters online, Sanders and @fshakir get it: in this primary, tangling with Warren or Harris is grabbing the third rail. Biden *might* get that now, after Harris walloped him in the first debate./8 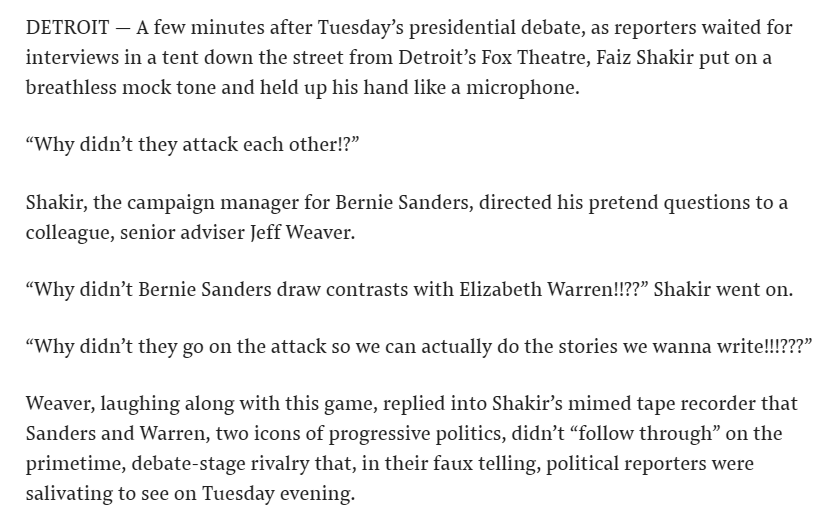 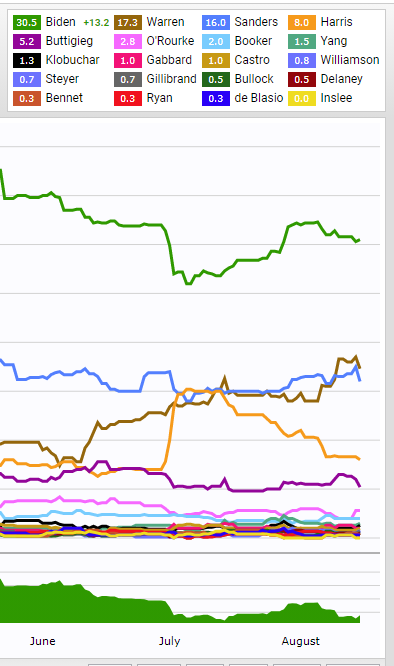 Truth is, Biden doesn't really have much going for him beyond a belief in his electability. Bernie entered this (first pic, April 30) with 16% favoring his policies. Bernie still has that and will likely keep it--but Warren now has 32%, almost double Biden's 17%. /9 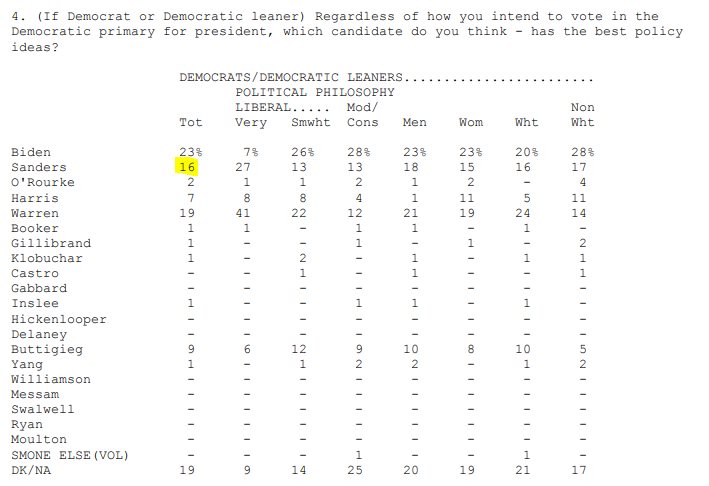 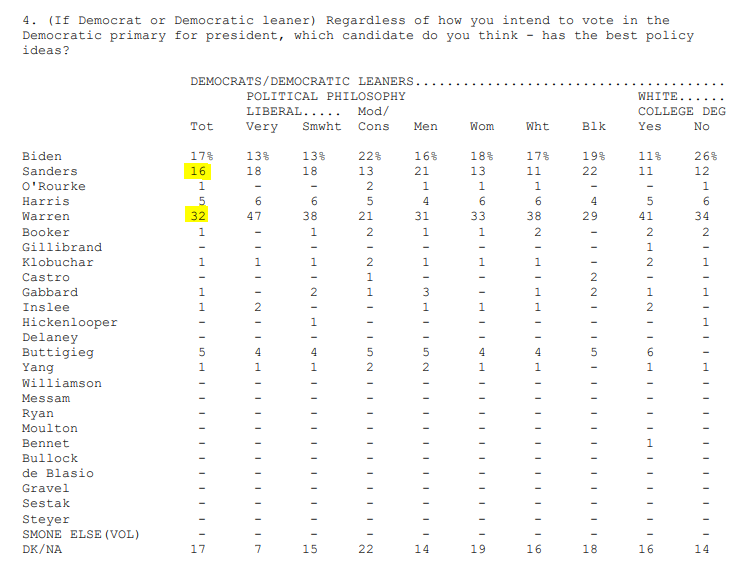 A key takeaway from this chart, which starts at Biden's announcement, is that Sanders, Warren, and Harris all show more inverse correlations with Biden than with each other. Who gets the spoils depends on context.

I don't see how he stops a decline over the next six months. /10 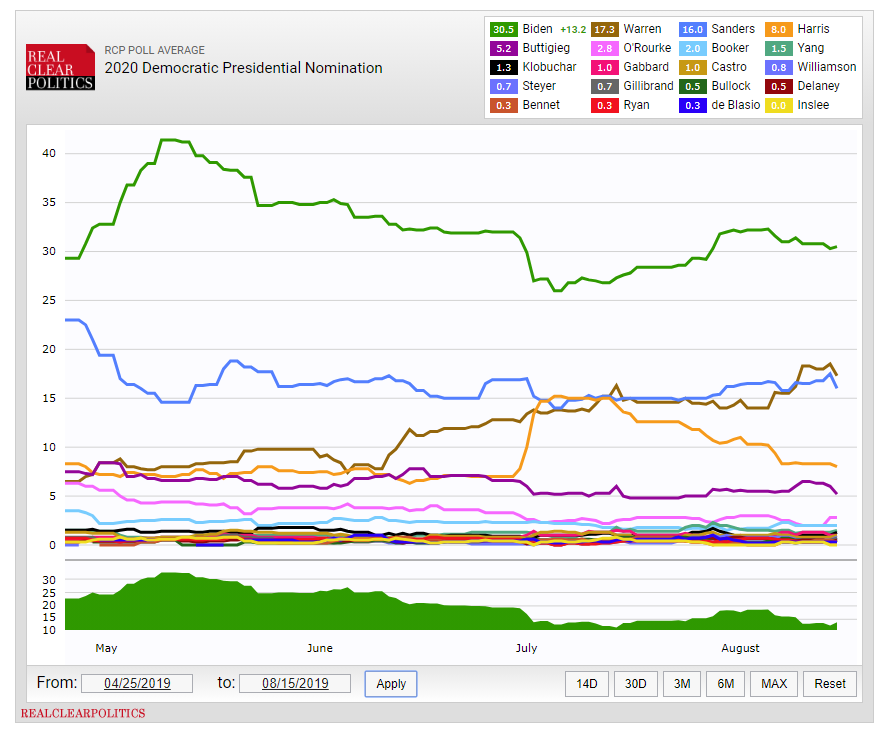 Polls like these are bad for Biden. His primary appeal isn't an argument that he leads by a few extra points and thus is statistically more likely to win, it's that he's the only one who can beat Trump. These polls soothe electability fears, letting his supporters float away. /11 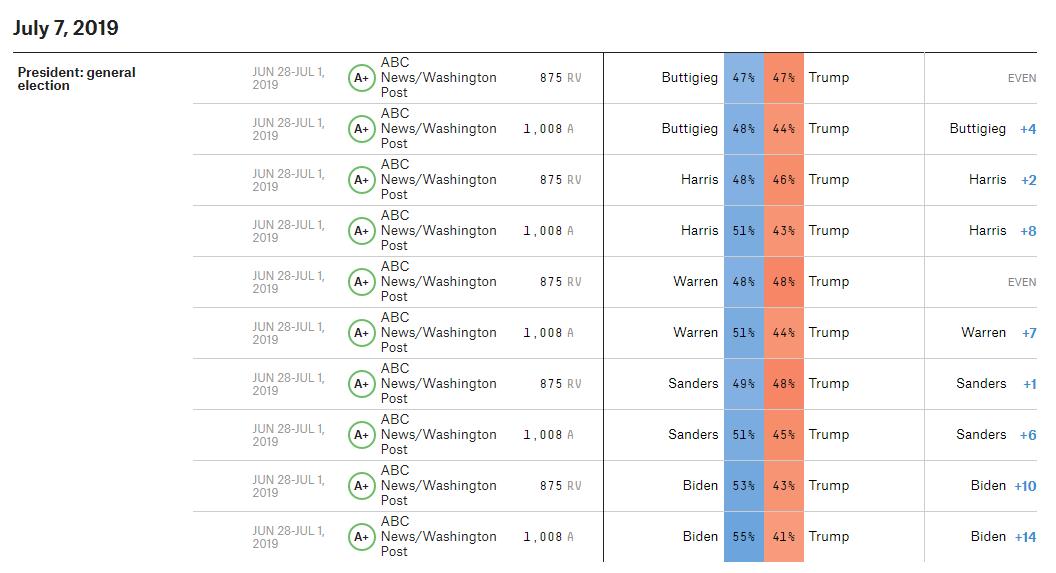 There's six months until Dem primaries are held, and the electability fears might recede somewhat. @RachelBitecofer was right about this: Trump has shifted the college demo hard towards Dems. In 2018, "suburban white college" became D+ for the first time in over a decade. /12 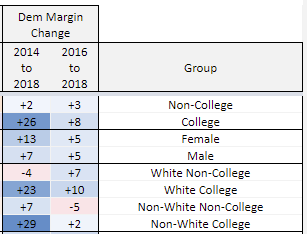 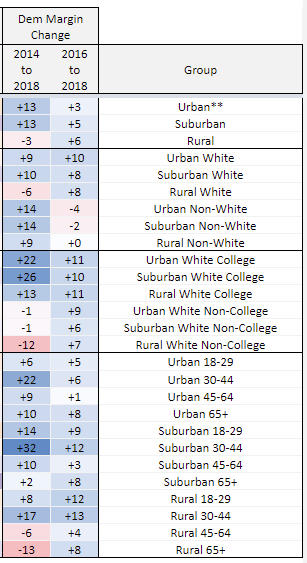 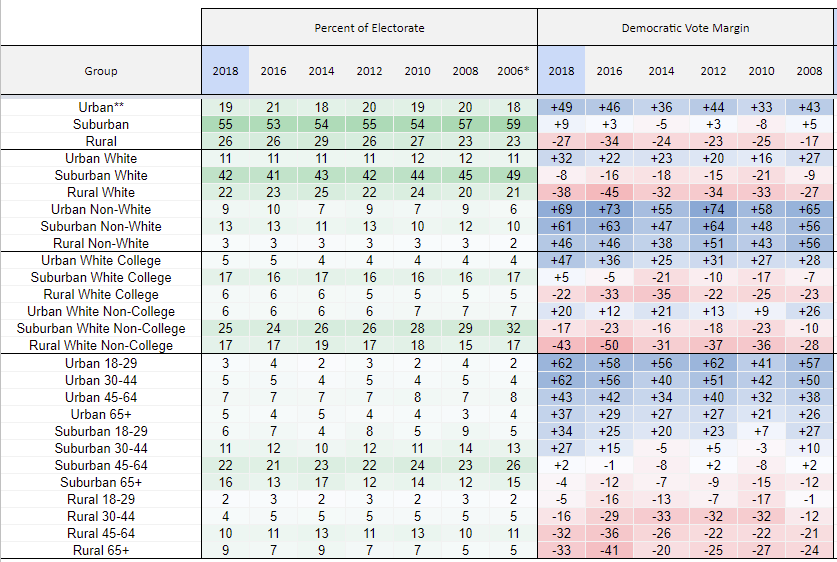 Some of the state polls suggest the "electability" shift is accelerating. Anything below 25% is a flashing red light for Biden: it means he has lost at least half of the Dems who prioritize electability. He's hitting the floor of people who care *solely* about electability. /13 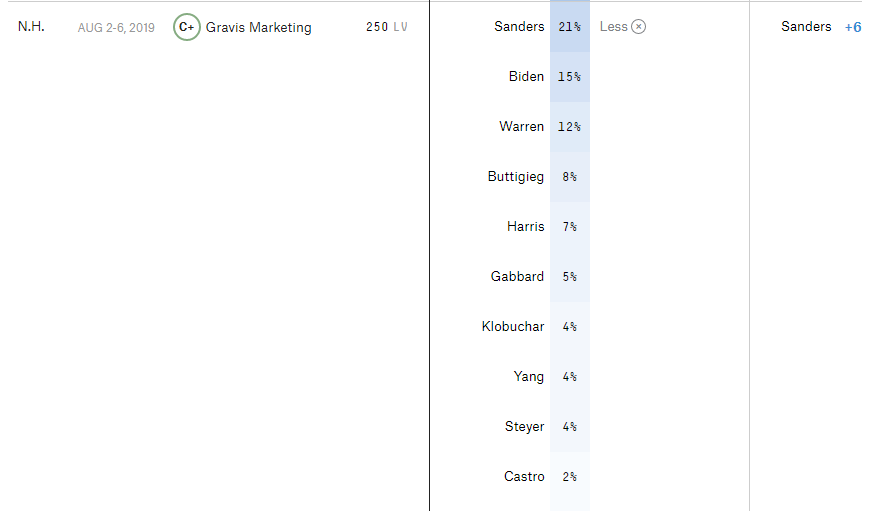 If trends continue, Biden's floor is 20-25% pure electability Dems. Sanders' floor is 15% die-hard supporters. Warren and Harris already have a bloc of about 40% of Dems who put them as second choice, and they're second choice of 48% of Dems supporting other candidates. /14 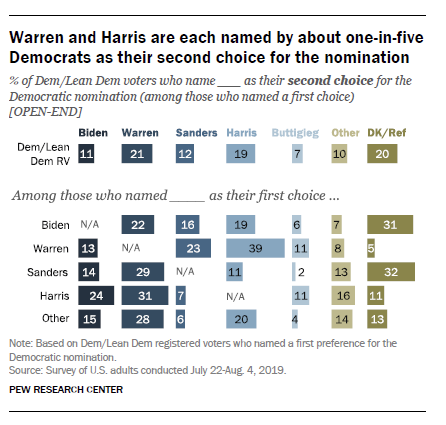 It's quite possible that, in the primaries, Biden, Sanders, Warren, and Harris all regularly get >15% of the votes, and thus delegates, leading to no one having a majority heading into the convention.

Whoo hoo, we get a brokered convention! /15

A Biden/Sanders or Sanders/Biden ticket ain't gonna happen. I assume the powers that be would lean on Warren and Harris to fall behind Biden, which would make sense if Biden's campaign hadn't positioned itself against them both. Sanders was far smarter in that regard. /16

But assuming present trends continue, then the single knock-out punch available is Warren + Harris doing something together, whether that's both endorsing Biden or Sanders, or <drumroll> running together. If one of them is frontrunner or tied for it, that's possible. /17

As I said at the beginning, this is all wild speculation. Maybe Biden dazzles us all, sailing to a majority, or maybe he implodes. Same with Bernie.

But I doubt both. Wouldn't surprise me if Biden fell modestly and Sanders stays firm, while Warren and Harris both rise.

Agreed, if trends continue, seems likely Dem establishment pushes for Biden-Harris. She's only 54, it makes sense for her to try VP->POTUS. Problem is, pushing out both Sanders *and* Warren presents a risk of repeating 2016 low left-leaning base turnout.