California used to be Republican. We gave the nation Nixon and Reagan. 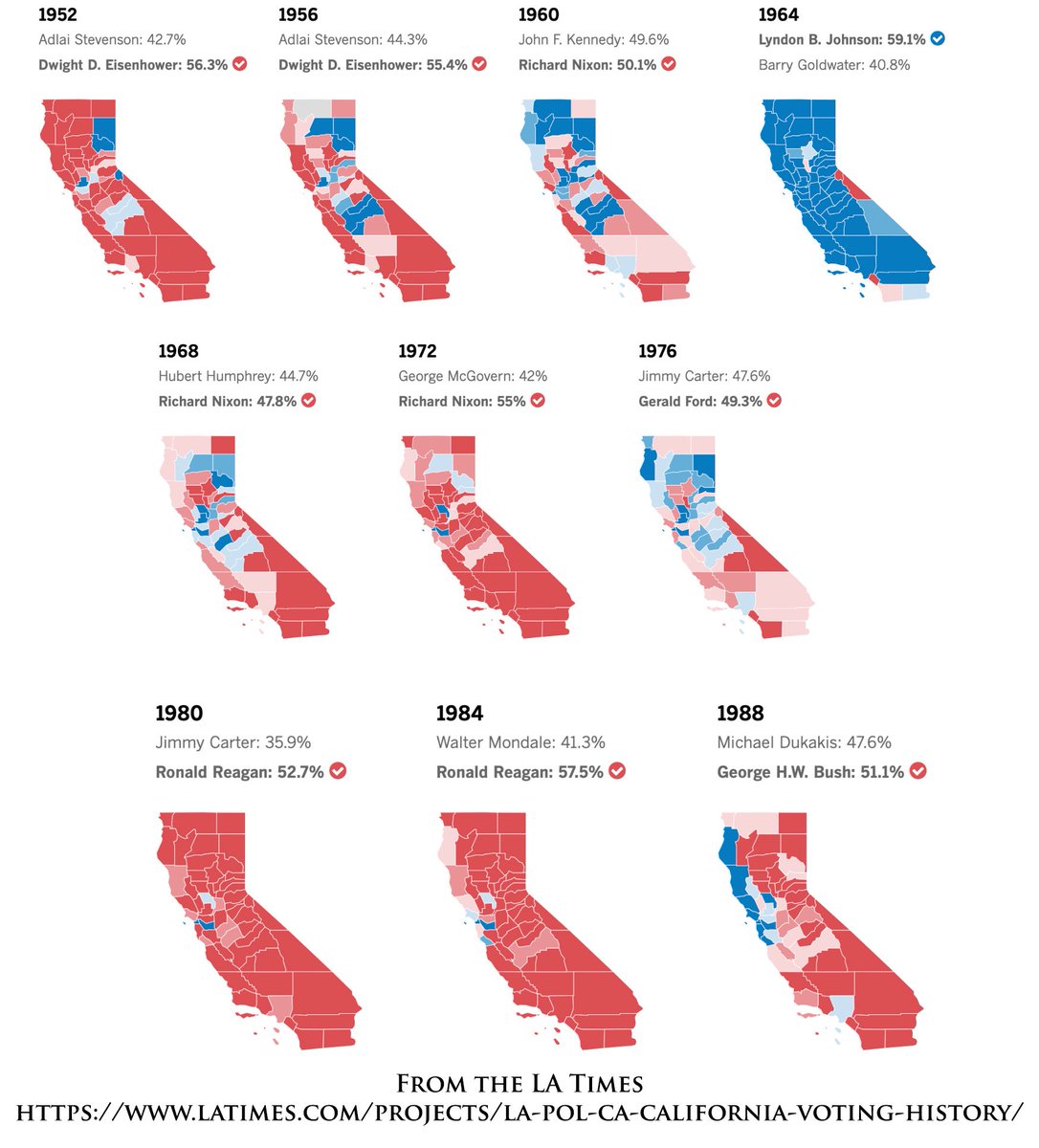 1/ By 1990, CA demographics were changing, with growing Asian and Spanish-speaking communities.
California's "Latino and Asian populations boomed in the 1990s” https://www.latimes.com/projects/la-pol-ca-california-voting-history/ …

In the late 1980s and early 1990s came a candidate, Pete Wilson, stoking fears of immigrants.

2/ Here was one of Wilson’s 1994 reelection campaign ads:
https://www.youtube.com/watch?v=lLIzzs2HHgY …

“They keep coming . . .” begins the narrative. It's very Trumpian, almost like Trump modeled his own ads on Pete Wilsons'.

3/ As an example of California suppression, polling sites “adversely impacted the ability of limited-English proficient voters to cast an effective and meaningful vote.”
https://gould.usc.edu/students/journals/rlsj/issues/assets/docs/issue_17/09_California_Macro.pdf …

5/ Chinese were among the first in San Francisco, having built most of the railroads.

6/ California has a history of that. We owned the Japanese internment camps in WWII.

Guess who was doing most of the backbreaking work picking crops in the fields? (Hint: They spoke Spanish.) They also paid taxes.

187 kept their children out of school.

This was the part of the plot where the subtext became text.

People said things like, “Why should our taxes pay for schools and hospitals for them?"

(Um, maybe because they pay taxes, too? And they do important work?)

8/ I had a friend who taught school in a rural area. Many of her students had parents working the fields. Now they were to be denied access to classrooms, and even the nurses office.

Shocked into action by Proposition 187, liberals and minority communities organized.

By 2000, CA was mostly Democratic, because of changing demographics combined with a backlash against the anti-immigration hate stirred up by 187.

California had a 2/3 rule, which required 2/3 vote among lawmakers before anything could pass.
https://www.ocregister.com/2010/10/01/two-thirds-majority-rule-confounds-budget-process/ …

This meant the GOP—now a minority—could hold up the works. The 2/3 rule gave them great power. They could be obstructionists.

11/ GOP lawmakers refused to pass budgets until they got what they wanted.

This was the part of the plot where the party that represents a minority of the population (who used to be the majority) had disproportionate power, and used that power to obstruct.

12/ To get anything done, California either had to:
💠get rid of the 2/3 rule,
💠let the Republicans shut everything down until they got their way, or,
💠work hard on elections until 2/3 of the elected representatives were Democrats.

13/ I’ve heard some absurd arguments for how California really turned blue, but I won’t refute them here.

OK, I’ll refute one of them.

One argument is that the supermajority happened because conservatives fled after California started enacting liberal policies.

14/ How silly is that? Liberal policies couldn't happen until AFTER we had a supermajority.

Once we enacted liberal policies, some migration solidified California's majority.

False claim: Workers left CA because it became too expensive.

15/ We have a $12 minimum wage, lots of protection for workers, and a progressive tax code
https://taxfoundation.org/which-states-have-most-progressive-income-taxes-0/ …
(meaning the rich pay more in taxes. Good for workers.).
Besides most of the workers weren't white.

I met a wealthy CEO who moved to South Carolina. 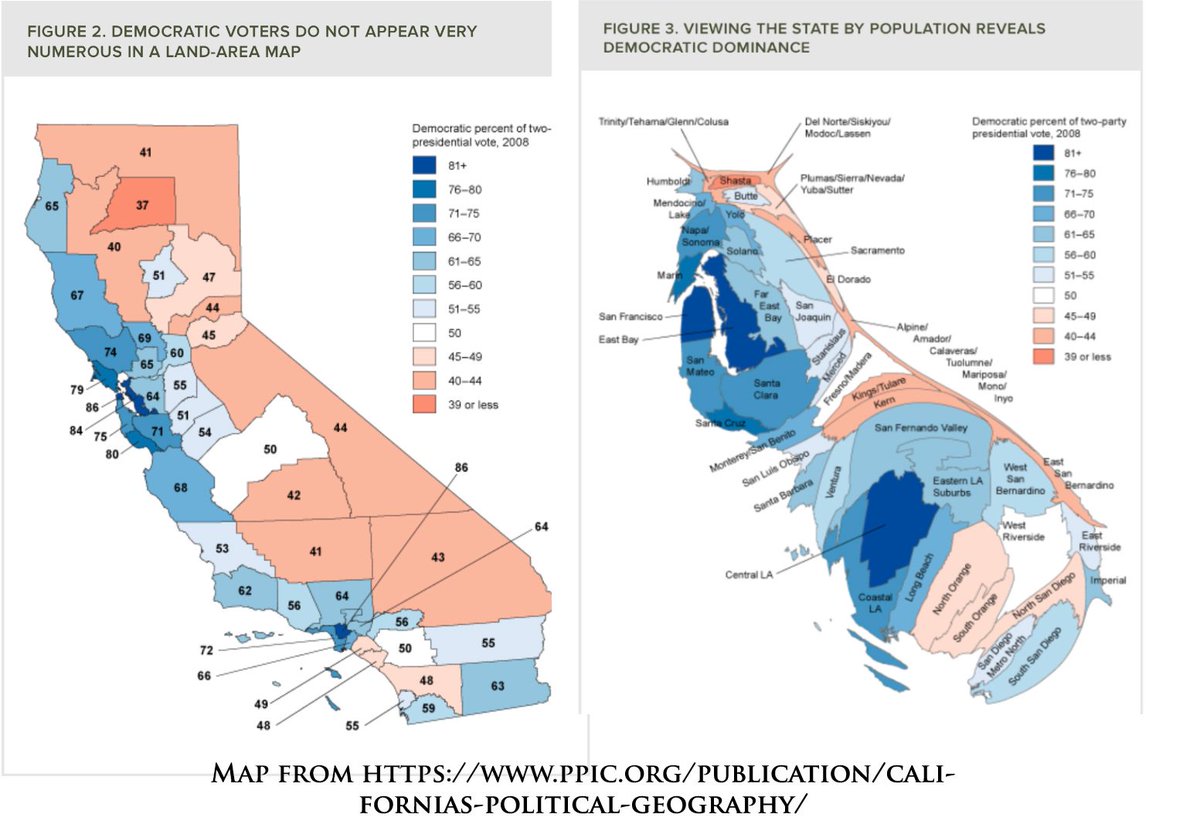 17/ During the 2016 election—while watching Trump’s campaign ads featuring scary people coming over the border—I said, “This is the Pete Wilson 1994 campaign all over again.”

The U.S. is now at the part of the plot where the subtext becomes text.

18/ Trump—like Prop. 187—has given people permission to say hateful, ugly things about immigrants and others.

This is also the part in the plot where we see cruelty to children.
https://www.buzzfeednews.com/article/claudiakoerner/children-border-detention-conditions-immigrants-hungry …

The result is that people are shocked out of complacency.

19/ Maybe it takes the subtext becoming text for that to happen.

Democrats have always had larger numbers, but were never well organized. Now they’re getting organized.

Only 58% of the eligible voters voted in 2016.
Find those who lean liberal and get them to the polls.

20/ Adriane said⤵️
When I saved her tweet, I made an optimistic note to myself: "Maybe the universe is unfolding as it should."

How does the story end?

“History doesn't repeat itself, but it often rhymes.” (Attributed to Mark Twain)

All of my threads are also blog posts. You can read this one here:  https://terikanefield-blog.com/how-california-turned-blue/ …


Good question about why the current GOP didn't learn from CA.

Psychologists @stenner and @haidt describe the "Authoritarian Dynamic,” which goes like this . . .