I think Warren is going to win.

But she’s also got that I-don’t know what.

I think she’s going to win.

I could be wrong. It’s just what I think.

But I do think it.

A point of clarity for those who would dissent:

I didn’t say YOU think she’s going to win.

Keep thinking what you think if you like; I don’t mind. We’re going to find out in time anyway.

Another point of clarity: No, I don’t think she’s the only acceptable candidate.

I simply think she is going to win.

Be OK with people thinking things.

Stop worrying about what [other group] wants.

The way this works is, you vote for what YOU want.

Why vote based on what you imagine someone else wants?

They vote for a story they can understand.

To a “swing voter” I don’t think they even think much about what the story is.

An understandable story is one of the few things Obama and Trump shared.

Never mind you guys. Trump might call her a name—something he certainly wouldn’t do against other candidates.

Idea: What if we stopped worrying about how a candidate will do among voters who would still consider voting for a man after he refers to his opponent with a slur? 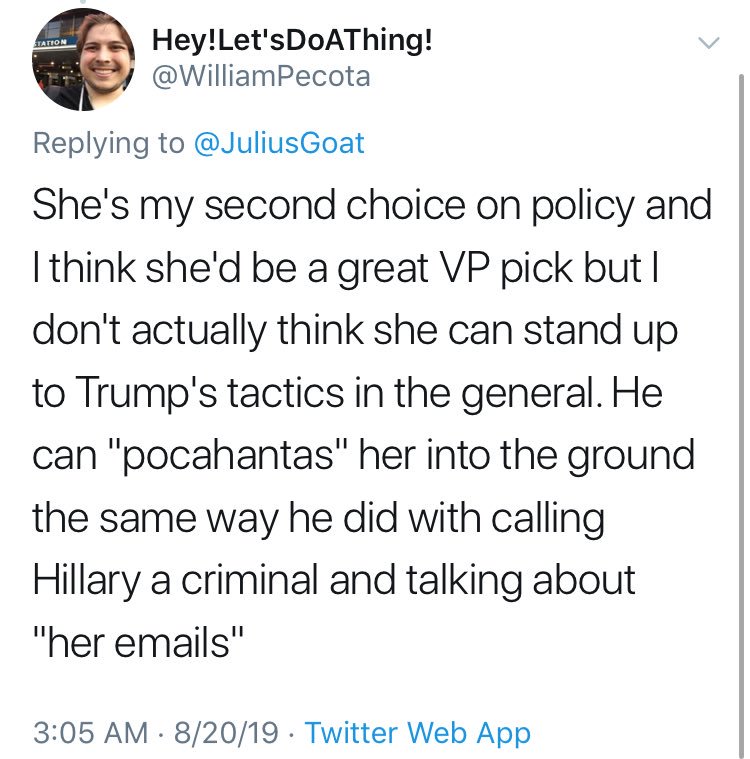 Some of my predictions have been correct, others incorrect!


You could play this game with literally any candidate who is or isn’t running, using any reason you or anyone else could make up.

If they’ve got you approaching elections like this, you’ve defeated yourself for them.

Remember when there was no way voters would elect a guy if his name was “Barrack Hussein Obama?”

The idea that there’s a voter who won’t go for Warren because she’ll be called “Pocahontas,” but will definitely go for Biden even though he’s called “Sleepy Joe”...who is that voter? Why would we want to see a campaign dedicated to winning them over?

So NOW we’re talking about a voter who is willing overlook Biden’s plagiarism/handsiness, yet is so willing to accept the least charitable interpretation of Warren’s story that they would vote for Trump instead?

Vote for who you want to win. And then own it.

Don’t push responsibility for who you want to win off on what you think other people are going to think, for God’s sake.