So, observability. It's about complex systems, unknown-unknowns, emergent behavior and other hard problems.

OR -- and I just learned this yesterday! -- it's what you get when a old school logs co buys an old school monitoring tool and wants to look hip.  https://www.businesswire.com/news/home/20190821005692/en/Splunk-Acquire-Cloud-Monitoring-Leader-SignalFx …

"Splunk to Redefine APM Category with Any Data at Any Scale to Help Organizations Navigate Cloud Journey; Establishes Splunk as a Leader in Observability For Most Glorious Future" 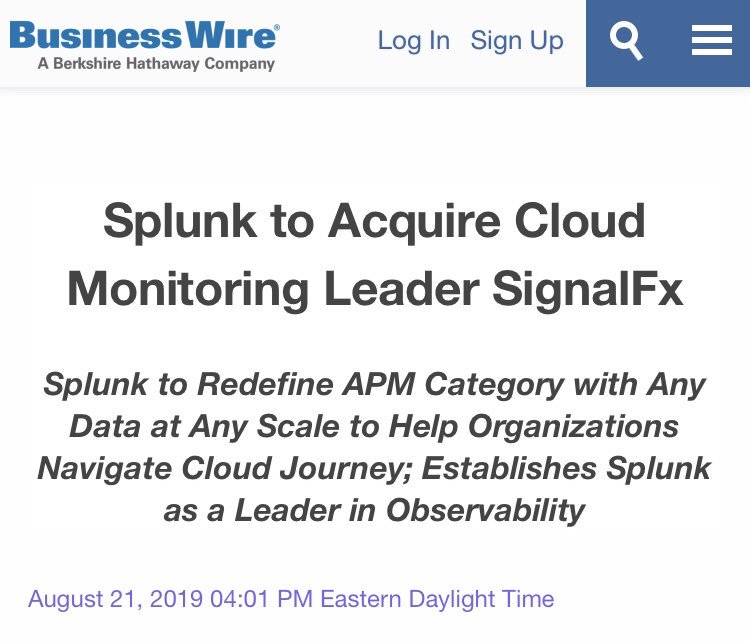 All snark aside, I genuinely hope splunk + signalfx *do* plan to merge and begin to engage with the the o11y problem space.

It would be good for all of us as users if they do.

Every vendor in the logs, monitoring, APM, tracing, and client analytics segments *should* be thinking in this direction.

Those categories only exist because of optimizations made long ago on the assumption that hardware was pricey and resources scarce. Their days are numbered.

But a note to the estimable CEOs of splunk & signalfx: monitoring and observability are *not synonyms*, and buying a monitoring tool doesn't make you a leader in o11y.

There is no transitive property of analytical tools that can justify this claim. You just sound kinda dumb. 😕

On the other hand, I'm now having grandiose visions of someday being acquired and releasing a magnificent press release announcing me to be the newly minted master of time, space, monitoring, debugging, and the automotive industry at large, so maybe they're on to something. 🤔

And if you're asking me if I would sell out my principles and agree to publicly call whatever they're up to over there "observability" in exchange for that 1.05 billion, I, er -- is that on the table? did you hear something? -- would never dream of it. How mercenary of you!

This may never get old 🤣