A new Monmouth University poll out today finds only 41 percent of Americans think an impeachment inquiry is a good idea.

Monmouth invited respondents to share why an impeachment inquiry was a good or bad idea.

“Among those who approve of the impeachment inquiry, people seem to think Trump deserves to be impeached because he’s a bad president or person at about the same rate than those who say he’s done something like breaking the law”  https://www.washingtonpost.com/politics/2019/08/22/house-democrats-have-some-convincing-do-impeachment/ … 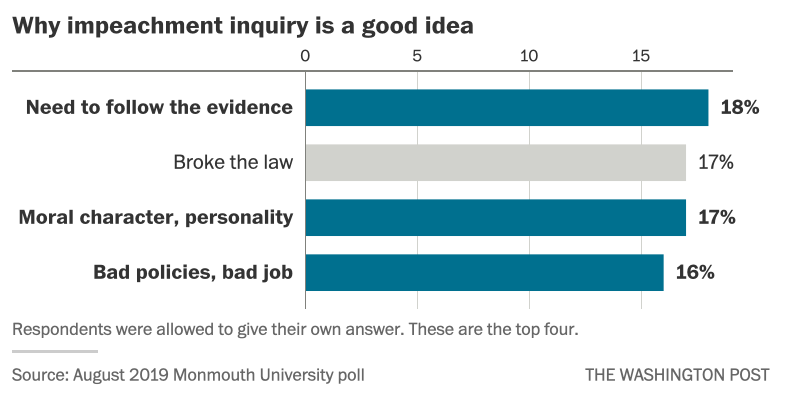 Notably, among Americans who both disapprove of Trump and who think an impeachment inquiry is a bad idea right now, only 8 percent say it is a bad idea because the Senate is unlikely to convict Trump.  https://www.washingtonpost.com/politics/2019/08/22/house-democrats-have-some-convincing-do-impeachment/ …

Internally, some Democrats say if they are going to impeach Trump, they have to do so by the end of the year — but think to initiate proceedings, they need more-significant findings that will move public sentiment in favor of ousting Trump, WaPo reports.  https://www.washingtonpost.com/politics/2019/08/22/its-going-be-tough-house-democrats-appear-less-likely-get-trumps-tax-returns-before-election/ …

Since Mueller’s testimony, 37 House Dems have backed an inquiry.

The average Cook PVI of the 131 Dems supporting an inquiry is D+16 and has drifted toward the Caucus average of D+12.5.