The Chinese AI unicorn Megvii (旷视) has filed a 557-page IPO prospectus ( https://www1.hkexnews.hk/app/appindex.html …) on the HK exchange (in their words: "opening ourselves up to the world" [p. 3]). They are expected to raise $500m - $1b. Here's some key takeaways from my morning power-skim:

The intro letter from 30-year old CEO Yin Qi (印奇) positions Megvii as an "AI company" started in 2011 amid AI's "cold winter" & dedicated to playing the "infinite game" of AI innovation. Letter also notes Megvii is releasing its core principles of AI practice in this prospectus

To learn more about Yin Qi and the founding team, see #ChinAI issue w/ reflections from Megvii's first product manager. Yin Qi told him back in 2013 that the industry is still in its infancy and will only erupt in the future after five, ten years:  https://chinai.substack.com/p/chinai-newsletter-23-why-leave-the-worlds-largest-facial-recognition-tech-platform-face-reflections-from-faces-first-product-manager …

Rest of this looong thread will highlight things I found interesting in 4 KEY BUCKETS: 1) what Megvii actually does in AI (e.g. its Brain++ deep learning framework, 2) overview of the industry verticals it's competing in, 3) AI and ethics (the word Xinjiang does not appear once)

iii) Supply Chain IoT -- enable manufacturers to deploy and manage networks of robots + smart retail sector. These three verticals are listed in the order of when Megvii entered them: in Personal IOT from the start, expanded into City IoT in late 2015, supply chain IoT in 2017

Also in Bucket 1: what Megvii does in AutoML: It references its DL framework (Brain++) 49 times, "a semi-automatic algorithm production line that is
constantly self-improving" - built on DNNs like ResNet [2/4 coauthors of famed Resnet paper (Jian Sun, Xiangyu Zhang) are at Megvii

Megvii describes Data++ as a way to do semi-automatic data processing and labeling/to reduce "human involvement during our training processes" - to get fuller picture of the data labeling workshops that Megvii & others still rely on, see:  https://chinai.substack.com/p/chinai-41-the-human-labor-behind …

Last thing in Bucket 1 is Megvii's curious claim that they also do AI-empowered devices - they argue that "AI companies have a better understanding of how hardware should be designed to better perform...when empowered by AI algorithms and software" (p. 106)

Part of a broader and very important trend: AI companies trying to do "software-defined-hardware manufacturing" and integrating both software and hardware in one AI
operating system. To paraphrase @pmarca: Is AI going to eat the world?

Megvii seems moderately dedicated to this hardware move, p16: "we intend to invest in, or acquire, companies with advanced hardware manufacturing capabilities in the upstream of the industry value chain." As of fIling, "they had not identified any potential acquisition targets."

Okay onto Bucket #2 - Megvii's position in various verticals: first a note on China Insights Consultancy (CIC), a Megvii's industry consultant for this prospectus which received a RMB750,000 fee for their commission fee. All the key stats that follow come from this CIC report

CIC report says Megvii is "largest AI-focused City IoT solution provider in China in terms of revenues in 2018" (>100 cities) - figure from p. 104; not much about Supply Chain IoT which makes me think they haven't done much here or that vertical may be slower to commercialize

They also say they recently set up a 6-member AI Ethics Committee chaired by CEO Yin Qi, includes @Lagarrigue_SE (I think) of Schneider Electric. Megvii says they have an AI Ethics Code of Conduct to guard against weaponization and misuse of its technology.

Megvii comes across as very defensive about negative media coverage about its corporate ethics. I haven't seen this type of statEment in other prospectuses: "We strongly caution you not to rely on any information contained in press articles or other media regarding us" (p. 78).

In particular they rail against a recent media report linking Megvii with alleged misuse of AI technologies. I think they are referencing this retraction by @hrw of a report that linked facial recognition to an app used in surveillance in Xinjiang. Still, this leaves open 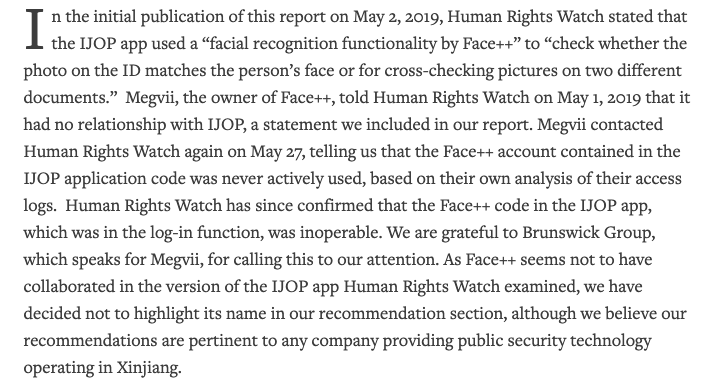 the question of the degree to which Megvii is linked to the high-tech securitization of Xinjiang, especially what a UN human rights panel has described as "mass surveillance disproportionately targeting ethnic Uighurs" Is Megvii still the official technical support unit for the

I think HRW does great work and I plugged their report on the IJOP but this is why we have to get the facts right the first time to prevent tactics like Megvii is deploying: singling out one retraction to obfuscate and avoid the above questions

Lastly I'll end with some big picture takeaways: any US export control/trade restrictions would probably affects Megvii's smart hardware products the most (but that's its smallest vertical), there's already been a lot of coverage of this type of stuff, so I'll leave for others

Another big takeaway: this is very much a Tsinghua-grown company, all cofounders attended Tsinghua's renowned "Yao Class" (姚班) headed up by Professor Chi-Chih Yao, winner of the Turing Award who gave up US nationality to return to China

Last takeaway: beyond Megvii we can learn a lot about China's overall AI industry from this doc: "Chinese companies have dominant positions in the global security camera solutions market, representing approximately 40% of the market." (Brazil, Thailand, India are big markets)

Full disclosure: No conflicts of interest to declare, but I do know and have done panels with some folks at Brunswick Group (who reps Megvii in int'l comms). Also, I probably only closely read 30% of the doc, focused on areas of personal interest, and don't regularly read these.