Really good question, and I think it frames so much of what is happening today. The term 'Cold War' is far too overused; I don't think the real Cold War could be captured in a term, nor does anyone truly understand it. But I think the answer to this is yes.

This currency and economic war will continue, and we may see something that truly resembles the Cold War as China approaches their 2040 military targets, and if we see a real debundle as the Belt & Road manifests. Most indicators point to China being ahead of schedule in these.

While western interests have latched onto the Hong Kong protests, the true Cold War-esque atmosphere is playing out in the Taiwan Strait, and has been for some time. On the left, a 2002 piece. On the right, from January.
https://www.nti.org/analysis/articles/taiwans-response-chinas-missile/ …
https://www.ft.com/content/44586804-195c-11e9-9e64-d150b3105d21 … 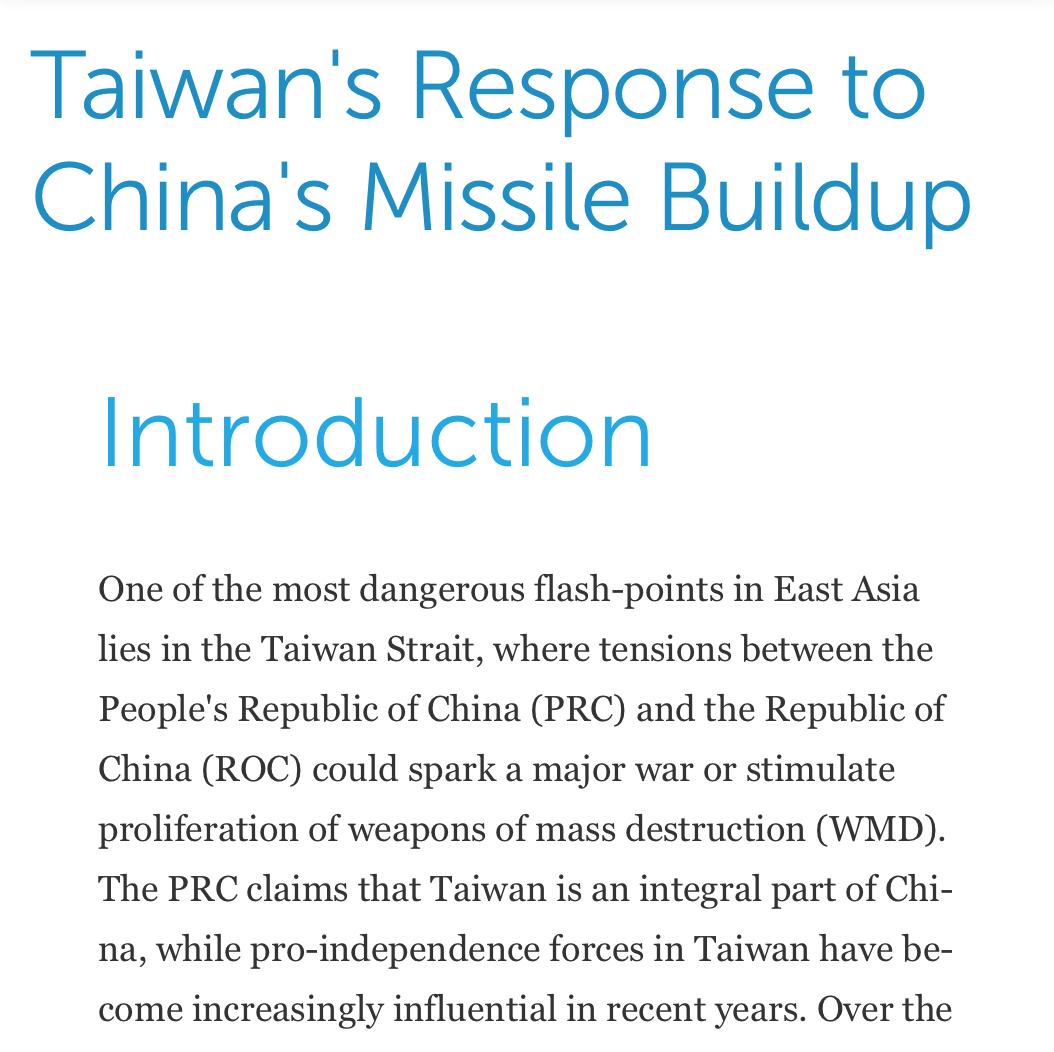 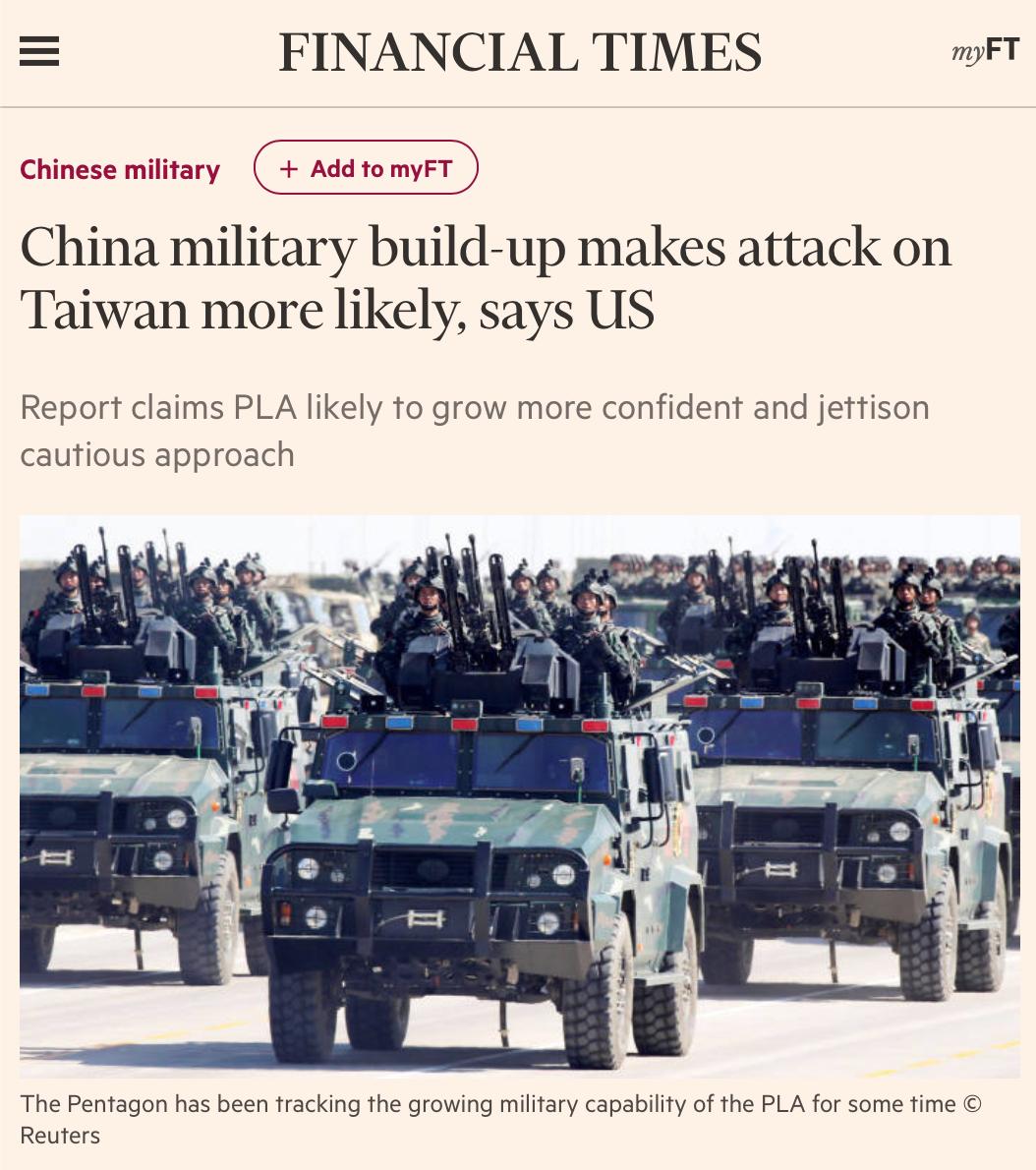 The South China Sea is a talking point embedded in everyone's ears at this point, and we're seeing the alliances continue to strengthen in this region.  https://washingtonpost.com/world/asia_pacific/japan-builds-an-island-wall-to-counter-chinas-intensifying-military-territorial-incursions/2019/08/20/802bc282-ae11-11e9-9411-a608f9d0c2d3_story.html …

Among the most interesting stories on the disinformation beat is Taiwan. What we saw in 2016 in the U.S. was mere meddling, an attack on minds and the perception of power. In Taiwan, the 'fake news' lies in the midst of missile brigades. Foreign Minister:  https://youtu.be/VrmGefn9Gaw

The disinformation wars we saw during the Cold War were aimed at eroding alliances, like the KGB's weaponization of AIDS hysteria. The word actually comes from dezinformatsiya, the name of the KGB's black propaganda department, coined by Stalin himself.

Generally, what we see in Hong Kong and Taiwan looks more like what we see in China itself. It looks more like state propaganda — calls for unification, demonstrations of military power, crafting enemies against China's interests, successes, and rise.  https://www.nytimes.com/2019/08/19/technology/hong-kong-protests-china-disinformation-facebook-twitter.html … 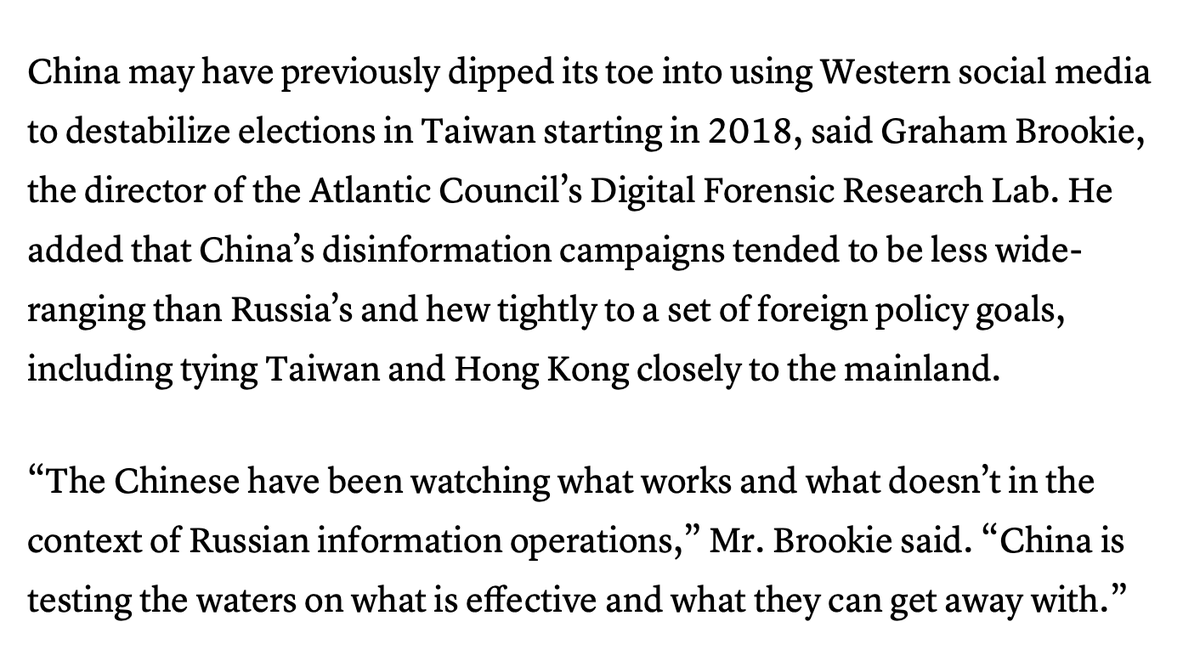 Some of it is of course weaponized, crafted with disinformation intent, and broadcast & amplified, often by unaffiliated nationalists. The disinformation rides atop the propaganda. For every surface level disinfo post, a multiple flows beneath the surface.

What we see in Chinese state media often simply speaks to the Chinese, to appease and quell tensions, to demonstrate deterrence, to paint Taiwan and Hong Kong's 'black hands' and 'terrorists' as roadblocks in the way of Chinese interests, that CCP can protect against & defeat.

Taiwan's rallying, a tug between systems, looks more like the traditional Cold War, with Chinese state propaganda (and some disinformation to degrade Taiwan & alliances) reaching the public too. What we saw in Hong Kong, while also a hearts & minds attack, was something new.

It is an uprising by people protecting their future & beliefs. But Hong Kong also sits in the midst of China's economic prowess as a world power. To the rest of the world, Hong Kong represents a chokepoint. The circuit sees HK as a domino to Chinese unrest

By decoupling eastern & western markets, American interests — that we know back Trump's agenda for his China stance, for their interest in a CCP demise — believe China will take a massive economic hit. The blooming asset bubbles & local debt could unravel. Belt & Road isn't ready

Hong Kong is truly important for what it represents to other nations. If the Chinese military were to dismantle the two systems agreement and annex Hong Kong with force, this may accelerate a disconnect, squeeze China, and set it back by years — and maybe lead to a CCP collapse.

That at least appears to be what some nations like the United States believe. It likely won't play out like this — but this economic fight will continue. The Cold War was equally an economic battle, but I wouldn't call what is unraveling another Cold War. It's different.

But it's this economic surface area where things like Biology and AI truly sit. A shift of power will not be one of a weaponization of biology and automation, but one of reaping their bounty. This is why so much of the think-tank & Pentagon circuit rattles off IP theft narratives

There are real and valid concerns around the proliferation of narrow AI. In the United States, this means the future of work — of the middle class, prosperity, and economic wellbeing. It is unfolding as a dichotomy of democratic socialism and capitalism, of sharing the bounty.

But, equally, AI represents a dichotomy between democracy and communism, of free trade, opportunity and state interest. It will greatly accelerate the labor force productivity gap & growth, and secure communism. This isn't about innovation, it's about ramping work up to 11.

The China under Xi is different. Not only do we see the hard-handed, human-rights-violating crackdowns, and a new spirit of disdain for foreigners and the west, with the borders and visas disappearing, but we see a China that truly understands this AI proliferation too.

China is no longer the free-for-all of value creation. It remains more free than the historical communist regimes, but the companies that were once free operators within a line of interest, are now extensions of and tools of the Communist Party. The lines have disappeared.

The IP Theft narrative we hear from western powers and the IC are that China vacuums up innovation & patents in cyberattacks and disperses it to their extensions. Is this true? I have no idea. But we now know companies like Huawei act like a State limb too  https://www.wsj.com/articles/huawei-technicians-helped-african-governments-spy-on-political-opponents-11565793017 …

There are real concerns about Chinese companies operating around the world. If you are in mainland China, you truly do remain subject to the interests of CCP — cooperation is in your interests. This creates a new conundrum. If all are subject, is anyone not a tool in this game?

This is a question w/ a lot of depth. Would a foreign nation build spying technology? That answer is historically yes. But would they do it in a way that has exposure potential — of sacrificing trillions & potentially, control? This wasn't yet retracted:  https://www.bloomberg.com/news/features/2018-10-04/the-big-hack-how-china-used-a-tiny-chip-to-infiltrate-america-s-top-companies …

These questions become more concerning when narrow AI becomes embedded in everything. I think this is why a lot of the Pentagon voices are reeling at Chinese tech. If we can't understand and diagnose models, would we know if they are tampered or embedded w/ military potential?

As much as we are in an economic war with nations backing artificial intelligence research and education to accelerate past everyone else in GDP and value creation, to build the luxury lifestyle powered by machines, we are amidst a real asymmetric cyber landscape too.

I say asymmetric, because this is what the Kremlin now calls their multilegged approach — their hybrid war — including the information warfare that was deployed leading up to 2016. Finding a powerful achilles heel weakened by a lack of militarized response

Russia is challenging the notion of warfare, squeezing between definitions and protocols to slowly weaken an enemy, punching above their military’s weight with focus. It’s why they’re in our energy infrastructure, and we’re currently not at war.

During June’s tensions with Iran, we saw the U.S. step back from missile strikes and the war that would follow. But we also didn’t lean back. Cybercom launched an offensive strike on a foreign adversary. We are testing the bounds too.

Every nation is prodding the line, truly. On a cost and diplomatic basis, cyber attacks are disproportionately effective. People don’t die, but the enemy remains crippled, unsure who had attacked them, and can’t justify risking own lives.

In 2011, Iran hacked an RQ-170 stealth surveillance aircraft. They brain washed it, and like it was easy, it landed on its own accord in Iran. This is the type of aircraft backed by billions of R&D that is tested at a secret air force base in Nevada. Yoink
http://washingtonpost.com/world/israel-confirms-downed-jet-was-hit-by-syrian-antiaircraft-fire/2018/02/11/bd42a0b2-0f13-11e8-8ea1-c1d91fcec3fe_story.html …

Russia is currently flying around their copy too. Why design it when you can steal it? Cyber 👍
https://www.thedrive.com/the-war-zone/29311/behold-the-first-flight-of-russias-hunter-unmanned-combat-air-vehicle …

In 1999, an American F-117A on a NATO bombing run over Yugoslavia was shotdown because the pilot forgot to close the bay doors. The pieces were flown to Beijing, and replicas sometimes appear in Chinese industrial parks.
https://www.youtube.com/watch?v=8JKkj2QXOvc …

A few months later, the U.S. bombed China’s New Belgrade embassy. We called it an accident. Oops. Do you see the discrepancies between pilots being shot down and cyber attacks?
https://www.bbc.com/news/world-europe-48134881 …

Now Chinese cyber operations just lift future aircraft from the defense companies before they’re anything more than plans. They’re probably currently flying what we are still building. This falls under the broad IP Theft narrative; but it’s different.
https://www.cfr.org/blog/chinese-hackers-are-stealing-us-defense-secrets-here-how-stop-them …

Those new powers that Cybercom has, where they can offensively attack targets without presidential or congressional approval? They’re currently being deployed on Chinese defense sector targets too. Yoink.
https://www.washingtontimes.com/news/2019/mar/6/us-counters-china-cyberattacks/ …

These attacks don’t share a lot of parallels with the Cold War. They don’t involve spies earning a brighter future. They implicate a military build up, but they’re benign. One by one, the benign attacks metastasize. Number, scale, impact, human toll.

I can’t way where this goes, but it’s interesting. A lot of smart people think AI will be a crucial tool in protecting against these cyber attacks, at the chip and network level, but we’re not there yet. Countries like Russia and China are investing heavily.

What is now a smart cloak and security agent, may soon become an AI weapon too. It is IT that will be most impacted by automation. Cybersecurity and forensics can be a SaaS tool too. Infiltrating and unwinding a network, as a service.

Like clockwork, nations are investing in advanced robotics and autonomy. An AI weapon may already be deployed in the field. They’re not different from UAVs, but armed Russian robots are killing in Dagestan. Do we know if there was a human in the loop?
https://www.wired.com/2008/04/armed-robots-st/ … 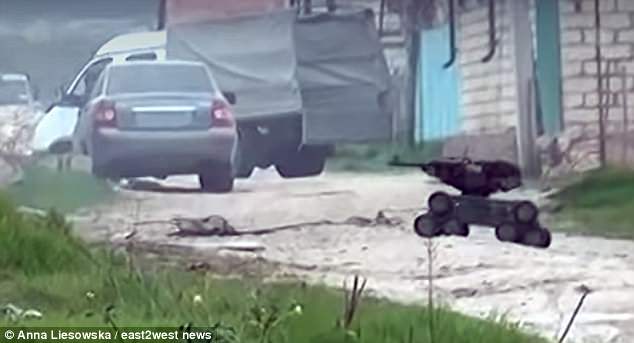 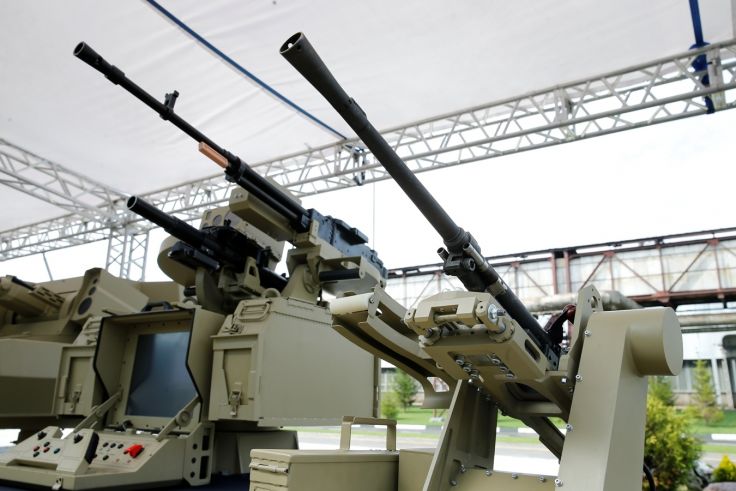 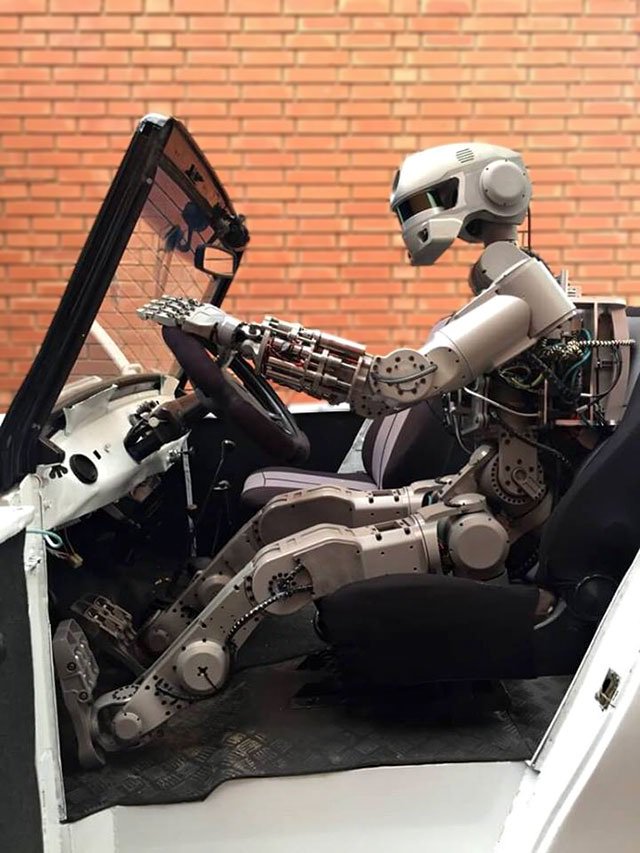 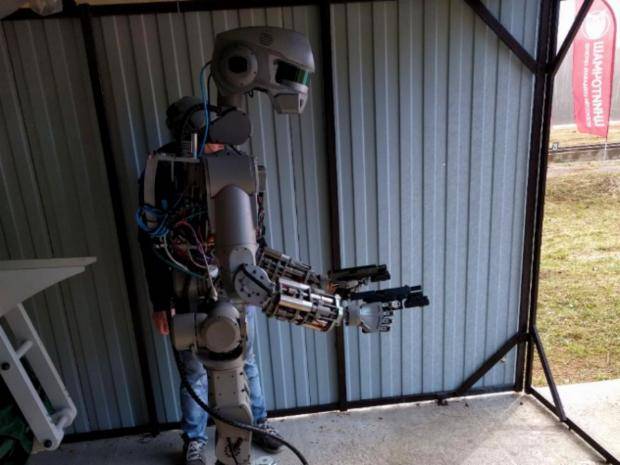 This is part of the national security sphere too, of attacking an adversary economically to cripple their capabilities before autonomy renders them more productive, better at fighting, and in essence, more powerful.
https://www.defenseone.com/threats/2015/12/pentagon-nervous-about-russian-and-chinese-killer-robots/124465/ …

Lockheed Martin on AI. Part 2 of 3

Lockheed Martin on AI. Part 3 of 3

Very happy to see a heavy focus on Taiwan going into their 2020 elections. We know the election playbook, and it's time to burn it before these attacks demand militarized responses.