I appreciate Apple's privacy stance, but I am more convinced than ever that Siri will fail to summit the mountain.  https://www.apple.com/newsroom/2019/08/improving-siris-privacy-protections/ … 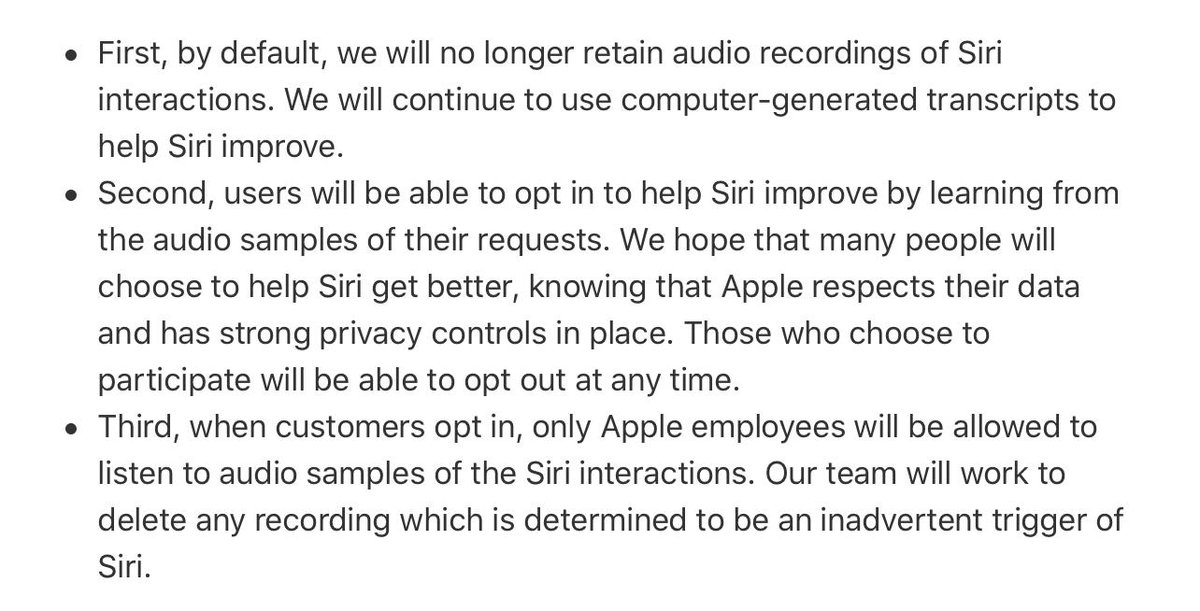 I don't understand the dichotomy Apple sees between audio and a computer's interpretation of it. If the goal is that the computer will reach ground truth, what is the difference? Why should one be private or on an opt-in basis, and the other be free game?

Making a divide between Apple employees and contractors also seems, just, naive. This is a problem with collection and tooling. Who touches the data is not a concern when both have access to the same resources, with the same lack of oversight.

These implementation details aside, I think Apple is solving the wrong problem. Hiding humans behind an automagic opt-in toggle 10 layers deep in Settings is the wrong approach. It's evidently deception by design, assuming no one will read this blog post & all will opt-in anyway.

What if we want humans in the loop? This is what I think Apple is missing. Siri wakes are programmed once on device activation, and than Siri disappears into the background. As our voices, spaces, & workflows change, it quietly grows more disconnected with us in the background.

As much as people want transparency on data collection, they want transparency on why & how things fail, on how to fix them, and understanding when they can be more trusted. Hiding all of this behind a singular activation and blind opt-in is cutting loses, not fixing Siri.

It's time to build the Siri in the foreground, one that acknowledges mistakes, that transparently presents a human in the loop. Windowing the human process to machine translation is ignoring the vast opportunity of voice. Broaden the focus, and let the user be the human too.

I wrote more about this here: