FDR taught us how to make rapid change: Win elections with large majorities.

When FDR took office in 1933, the U.S. was in the throes of the Great Depression.

Income inequality was like today, but with big differences.

1/ There was no social security.
There was no 40 hour workweek.
There was no minimum wage.
Workers who were injured were left to starve.
After a lifetime of subsistence wages, workers (and wounded soldiers who returned from war) died in poverty.

2/ There were no laws against insider trading so people got rich by manipulating the market.  https://www.thebalance.com/what-is-insider-trading-and-why-is-it-illegal-356337 …

Money laundering wasn’t illegal. . .  https://www.fincen.gov/history-anti-money-laundering-laws …
so people like Trump could get rich without adding anything of value. See:

3/ When FDR came to office in 1933, he was up against an extremely conservative Supreme Court.

In 1895, the Supreme Court said segregation was constitutional.

In 1905, the Supreme Court said a law limiting the workweek to 60 hours was unconstitutional. . .

4/ . . . because limiting the work week (like minimum wage) interfered with the freedom to enter contracts: If an employee was willing to take a job requiring 60+ hours per week, it was none of the government’s business.  https://www.law.cornell.edu/supremecourt/text/198/45 …

5/ Within the first few months of his presidency, FDR passed 15 major bills. He acted quickly to save the nation’s failing banks. Within a few years he had the nation on the way to recovery and people working again.

(Sources from the bibliography in my own book ⤵️) 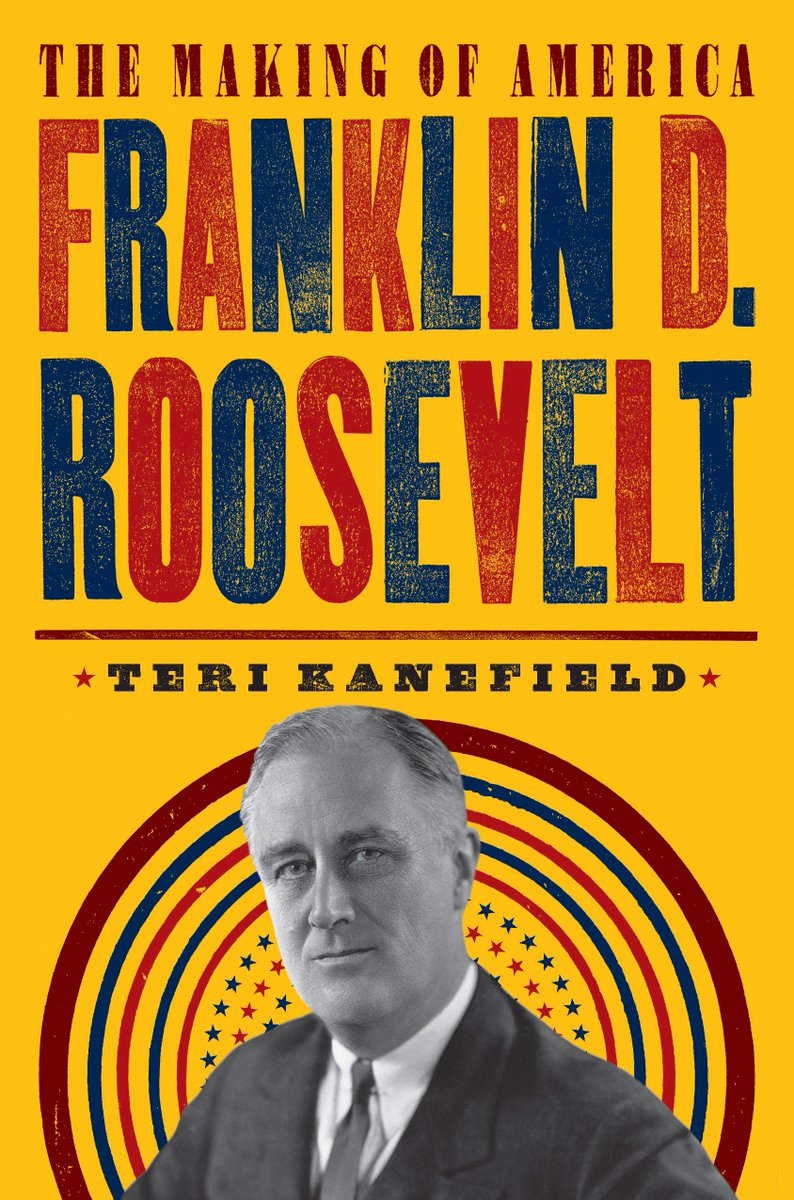 6/ By the end of FDR's presidency, we had social security, the VA bill, an SEC to regulate security, a bunch of new agencies issuing regulations to keep people from manipulating prices and markets.

7/ There was one hitch: Each time FDR passed legislation, the Supreme Court struck it down.

It was quite frustrating.

It wasn’t until after FDR was reelected in 1936 in a landslide that the Supreme Court backed down and stopped overturning his legislation.

8/ It is often said that WWII spending got us out of the Great Depression.

In fact, the New Deal steadily improved the economy through the late 1930s, but FDR never could enact all the spending programs he wanted because so often the conservatives blocked him—until the war.

9/ The spending in WWII completed the recovery, but war spending alone can't create a strong middle class, which we had for the first time after the War.
https://www.npr.org/2016/07/05/481571379/a-brief-history-of-americas-middle-class …

10/ FDR did a few other things along the way, like lead the US through WWII, help defeat a wave of fascism, and bring the US into a position of global leadership for the first time in history.

Landslide victories at the polls. He was backed by popular support.

Please don't tell me that there was no cheating at the polls back then, so he could win big in the 1930s but Democrats can’t win in 2020.

That was before the Voting Rights Act.

12/ It wasn't even called cheating back then.

African Americans, for the first time, migrated to the Democratic Party in large numbers. The Afro-American newspaper explained why⤵️

But blacks were largely kept from voting. In some communities . . . 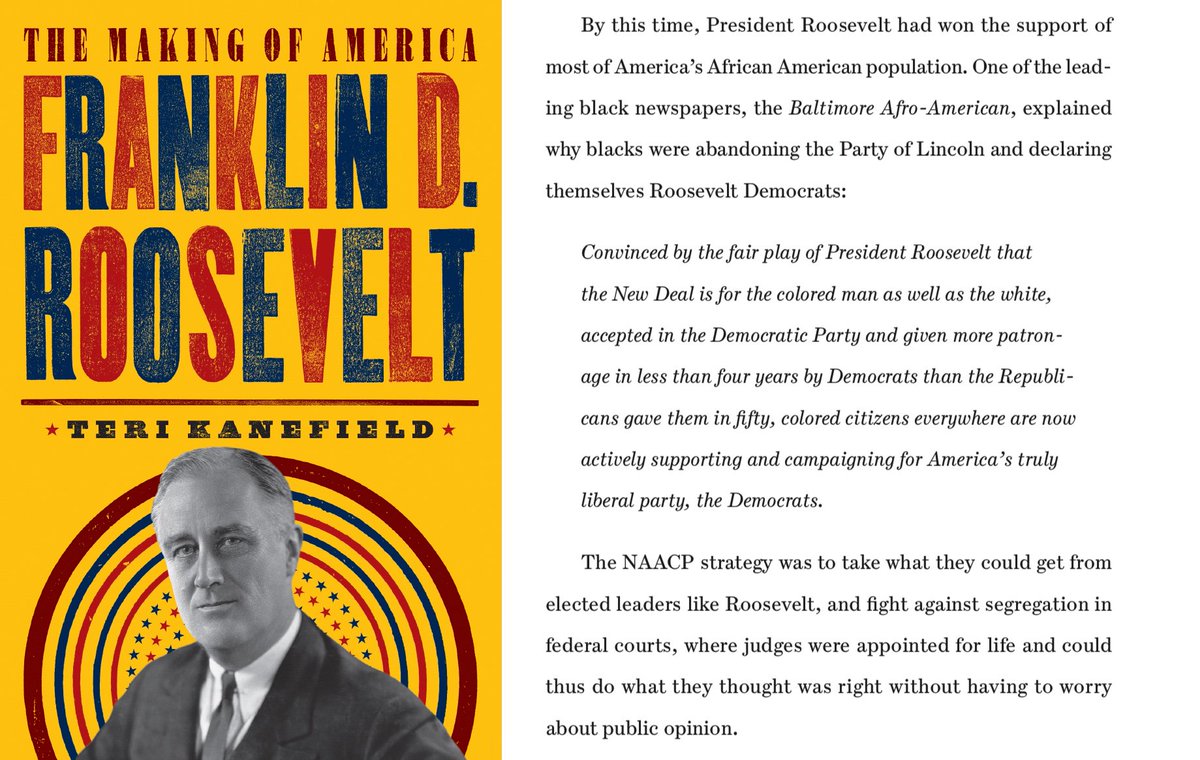 13/ In some communities, African Americans were entirely shut out of public life. (Segregation was legal, remember.)

So yeah, that kind of thing was way worse in the 30s.

The GOP base is aging and shrinking. The Democratic base is young and increasing. A landslide is possible.

A large enough victory can turn things around fast.

Should have qualified Tweet #7: SCOTUS struck down lots of his major legislation.

Sometimes I run out of space in tweets and scrunch things and then end up with an inaccuracy. (Appellate lawyers hate inaccuracy)

280 characters?
I solved that problem by learning to thread.


Someone said: "You can't express complex ideas on Twitter."

Me: "Oh yeah? If I embed threads in other threads, I can write a dissertation on Twitter."

I have a different reading of FDR (which, of course, I didn't put into this thread because of Twitter limits)

FDR, like Lincoln, ended up moving the needle, but both were careful never to move too far ahead of public opinion.

As a result, both FDR and Lincoln often frustrated those farther to the left.

FDR, for example, didn't do much to advance Civil Rights. He didn't want to upset his base, which was still mostly white and southern.

Tim is arguing against someone who says a landslide in 2020 isn't possible ⤵️
I believe Tim is correct. A landslide is possible, particularly if Joe Walsh divides the GOP and undermines Trump.

(I'll expand this idea into a thread later)

Absolutely correct ⤵️
Maybe I should do a thread disabusing the idea that money in politics is new.

What's new is the idea that money shouldn't be in politics. For much of American history "no money = no political power" was considered axiomatic.

Trump can keep his 35% base and lose in a bloodbath.

All of my threads are also blog posts. You can see this one here:  https://terikanefield-blog.com/fdr-sometimes-the-wheels-turn-fast/ …

I'm also posting them to a Facebook author page, for the people who tell me they still prefer Facebook:  https://www.facebook.com/terikanefieldauthor/ …