To put that in perspective: Xinjiang accounted for less than 2% of China's population but 21% of arrests in 2017.  https://www.nytimes.com/2019/08/31/world/asia/xinjiang-china-uighurs-prisons.html …

Xinjiang's imprisonment rates are higher than all of the United States combined. This enormous upswell of arrests, trials and prison sentences is unequaled in China's recent past.  https://www.nytimes.com/2019/08/31/world/asia/xinjiang-china-uighurs-prisons.html … 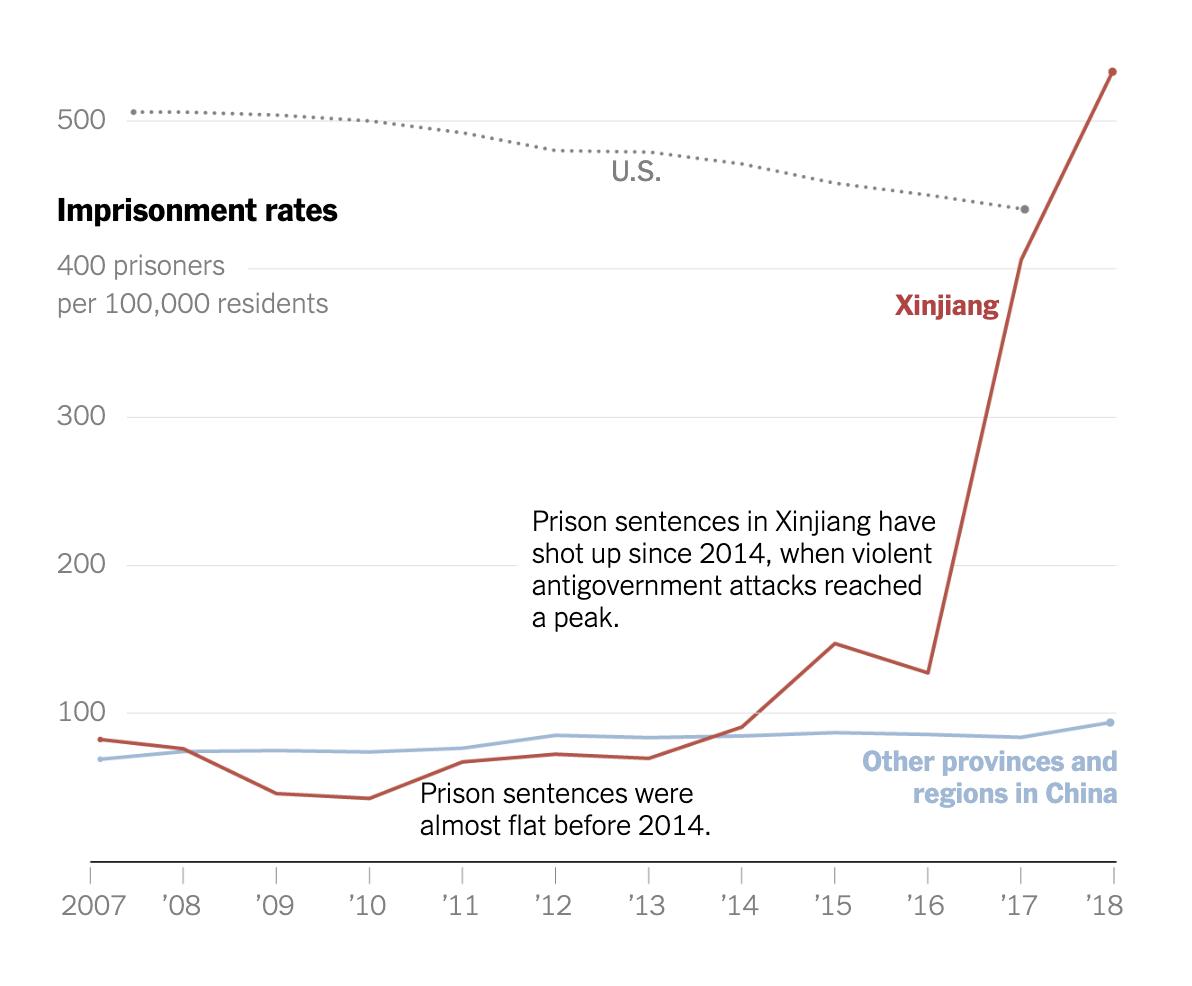 China has already established a vast network of so-called “re-education camps” and a pervasive surveillance system. Thanks to @ChuBailiang's impressive analysis of previously unreported data, we now know that they're also resorting to a harsher method of control: prisons.

It can be hard to find out what's going in the detention centers: when colleagues tried to see a detention facility, guards stopped them claiming the road was dangerous because of power cables. When they tried another route, police threw up a roadblock.  https://www.nytimes.com/2019/08/31/world/asia/xinjiang-china-uighurs-prisons.html … 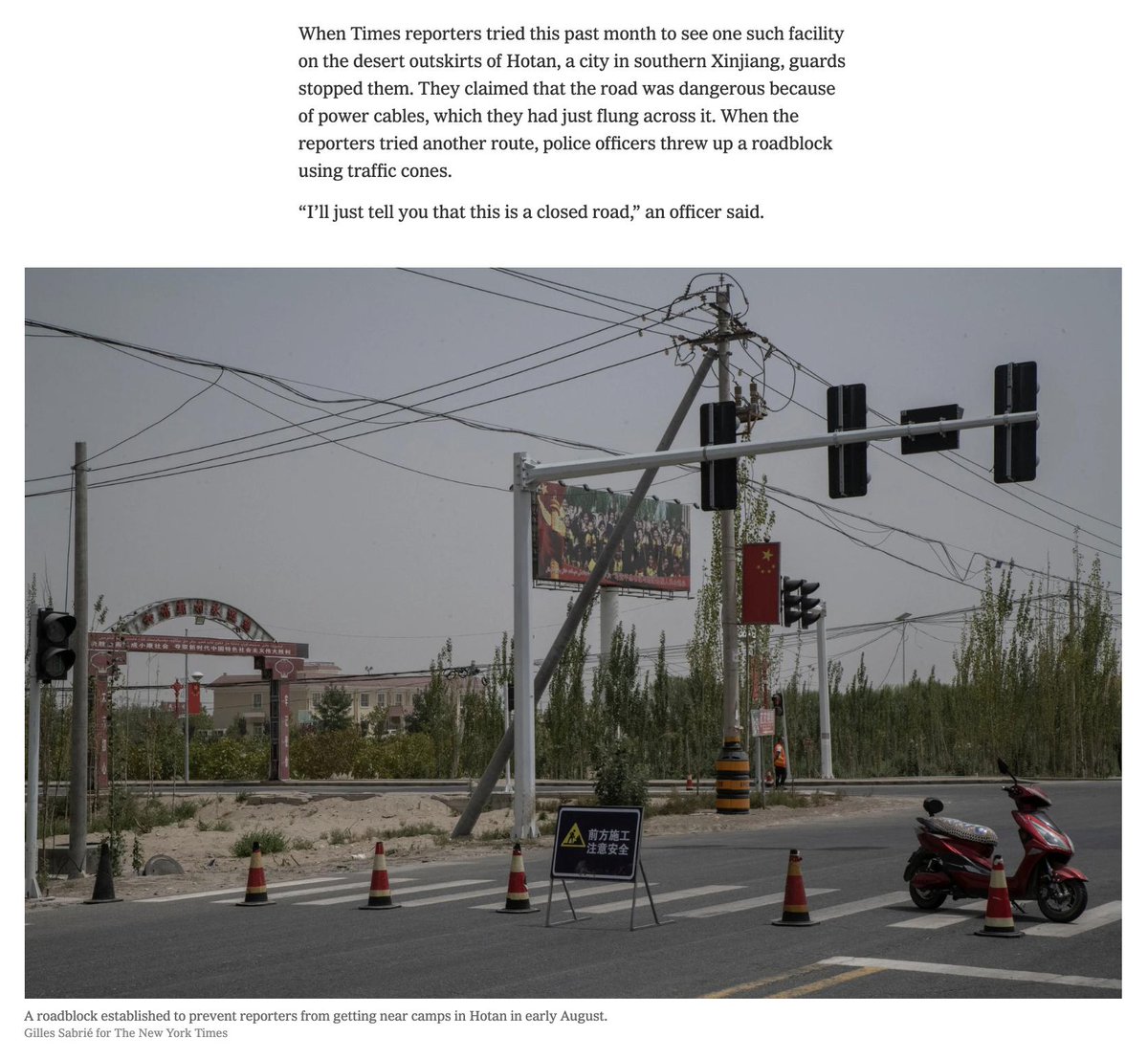 However, open source information like satellite imagery and tender data is a different way “into” these detention facilities. Over the past years, important and insightful work has been published by @shawnwzhang, @adrianzenz and @Nrg8000, amongst others. 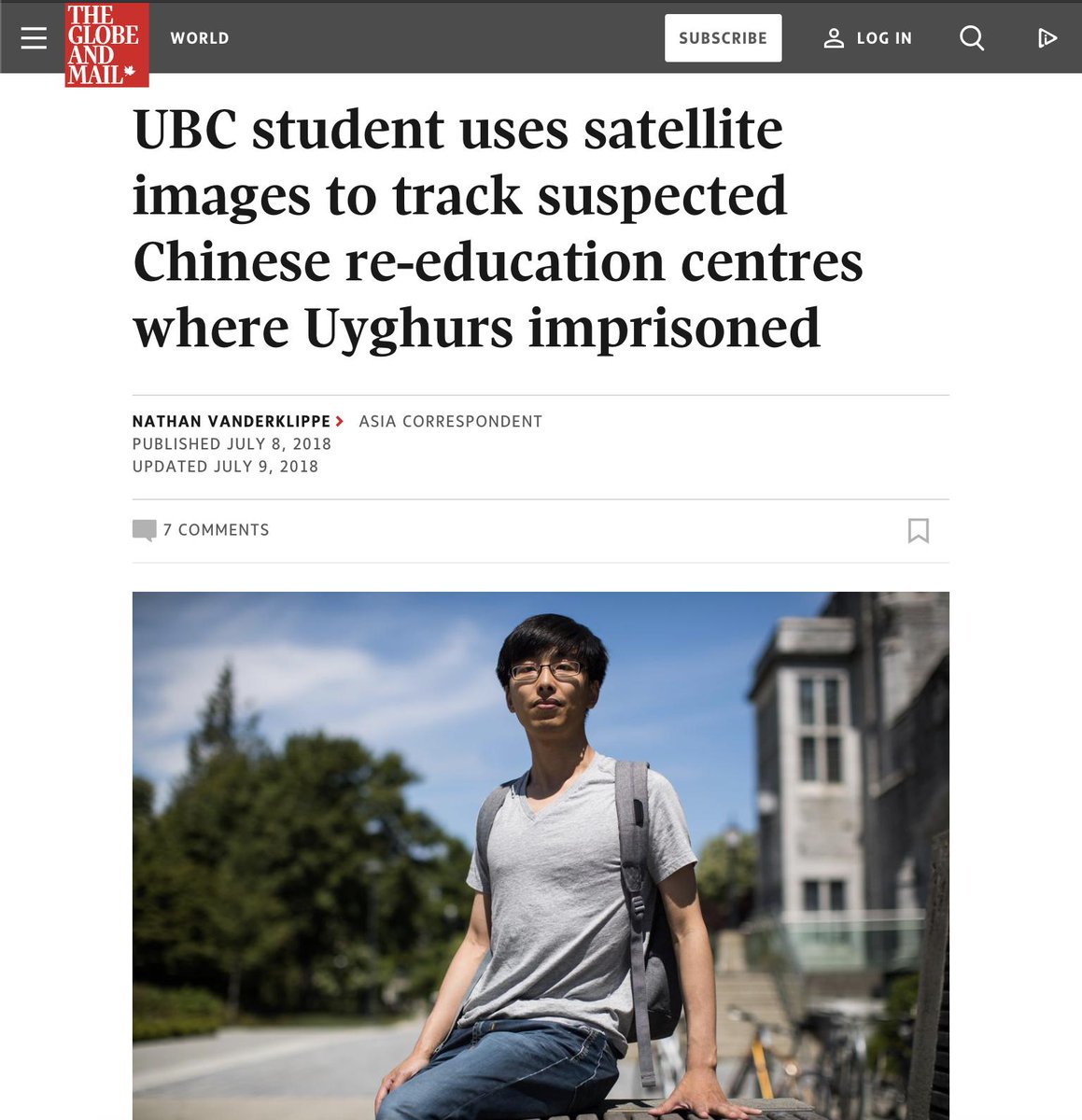 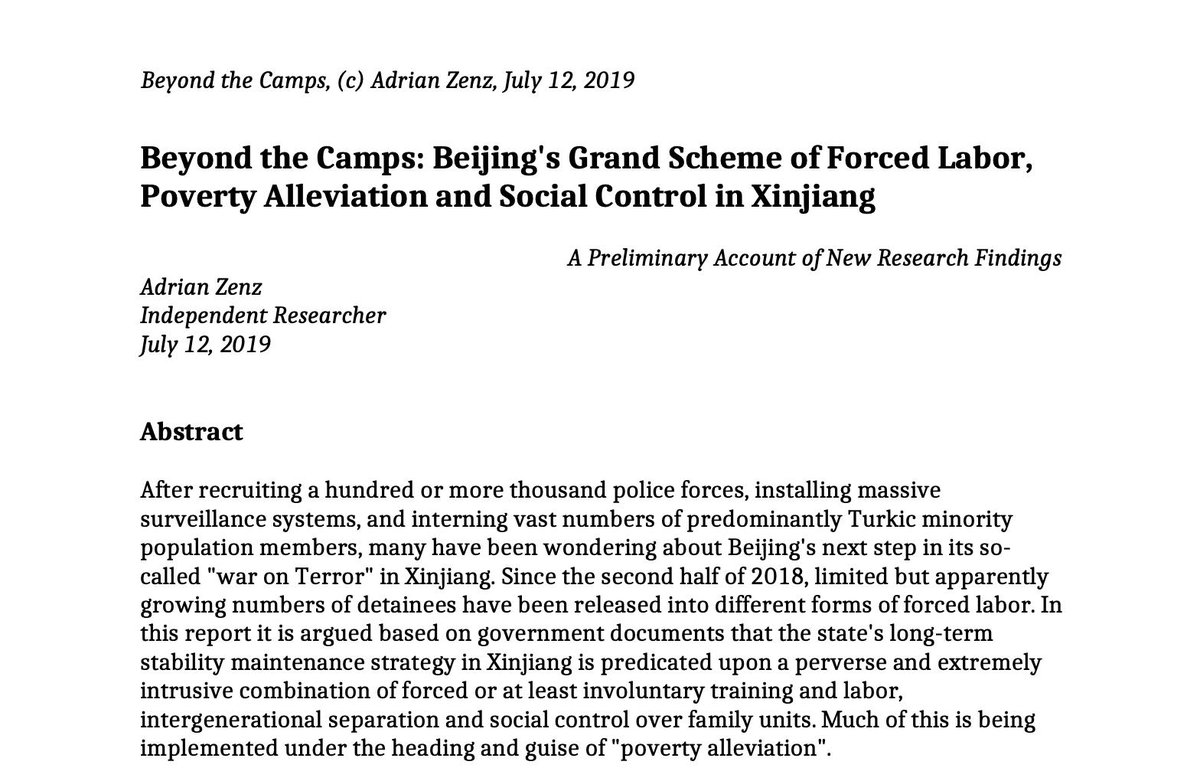 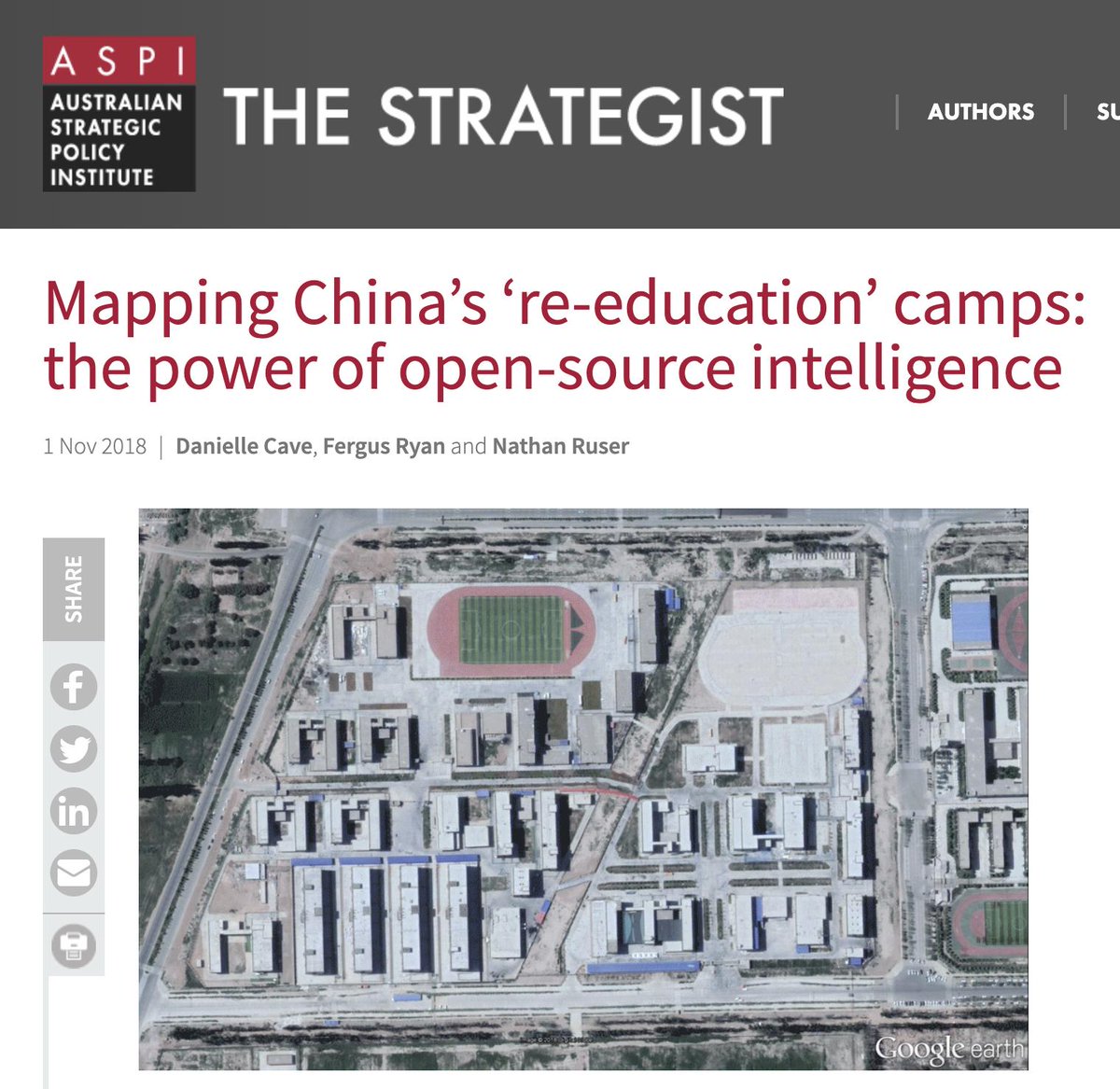 Following @ChuBailiang’s reporting, my colleague @ckoettl and I analysed 23 sites of possible prisons in Xinjiang that were earlier identified by @shawnwzhang.

All 23 sites are heavily guarded detention facilities, with features such as multiple walls and fences, tall watchtowers and guard buildings with access to the walls. Most have enclosed outdoor spaces and speaker towers. Here's an example in Aksu. (Graphic by @DrewJordan_NYT) 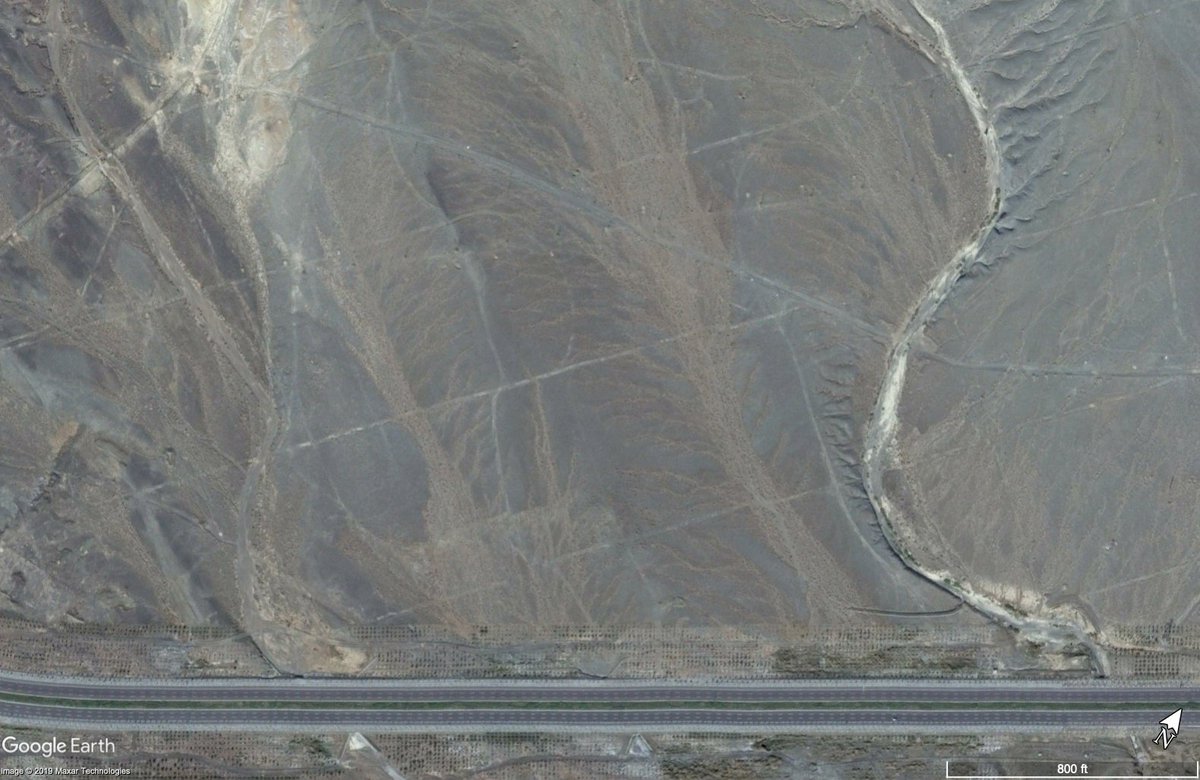 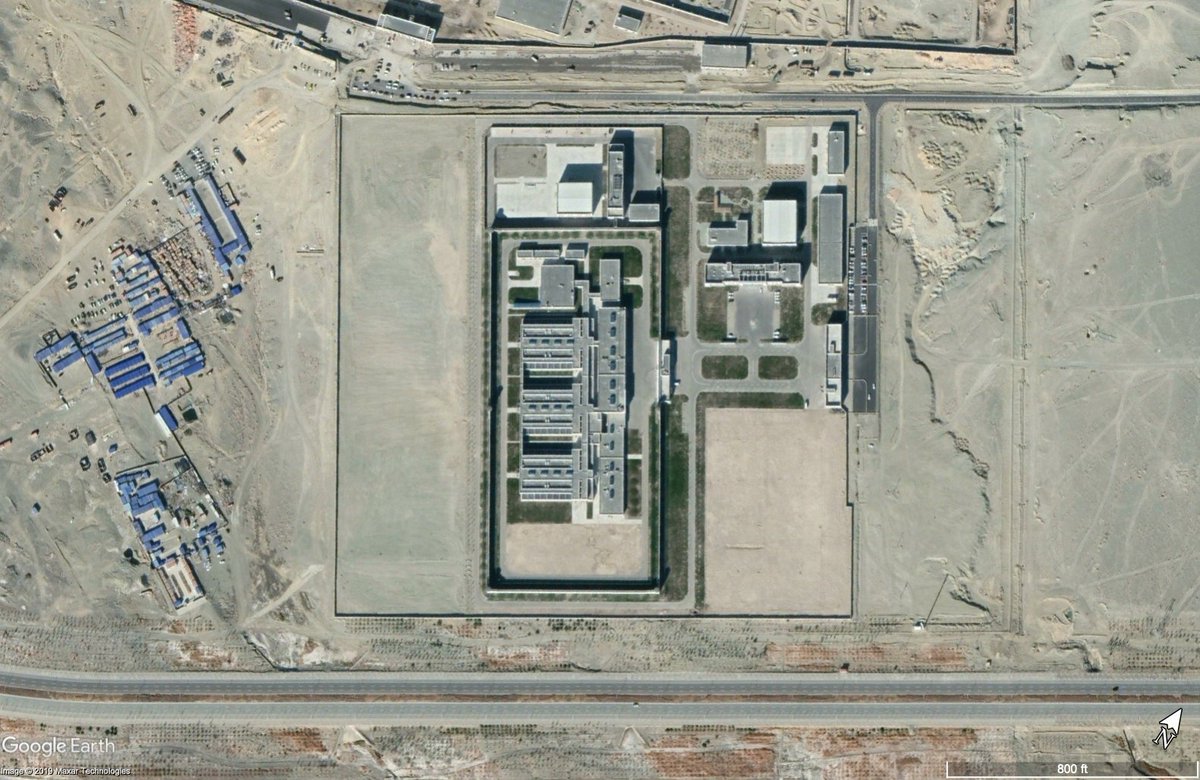 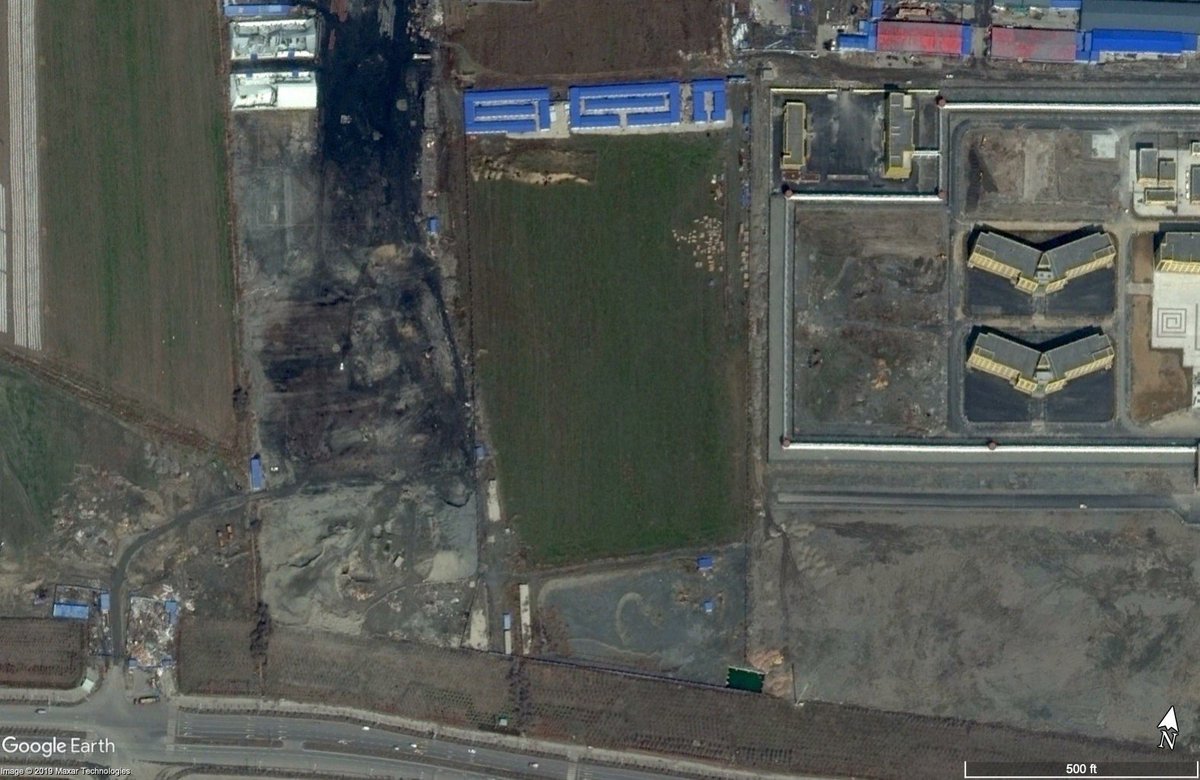 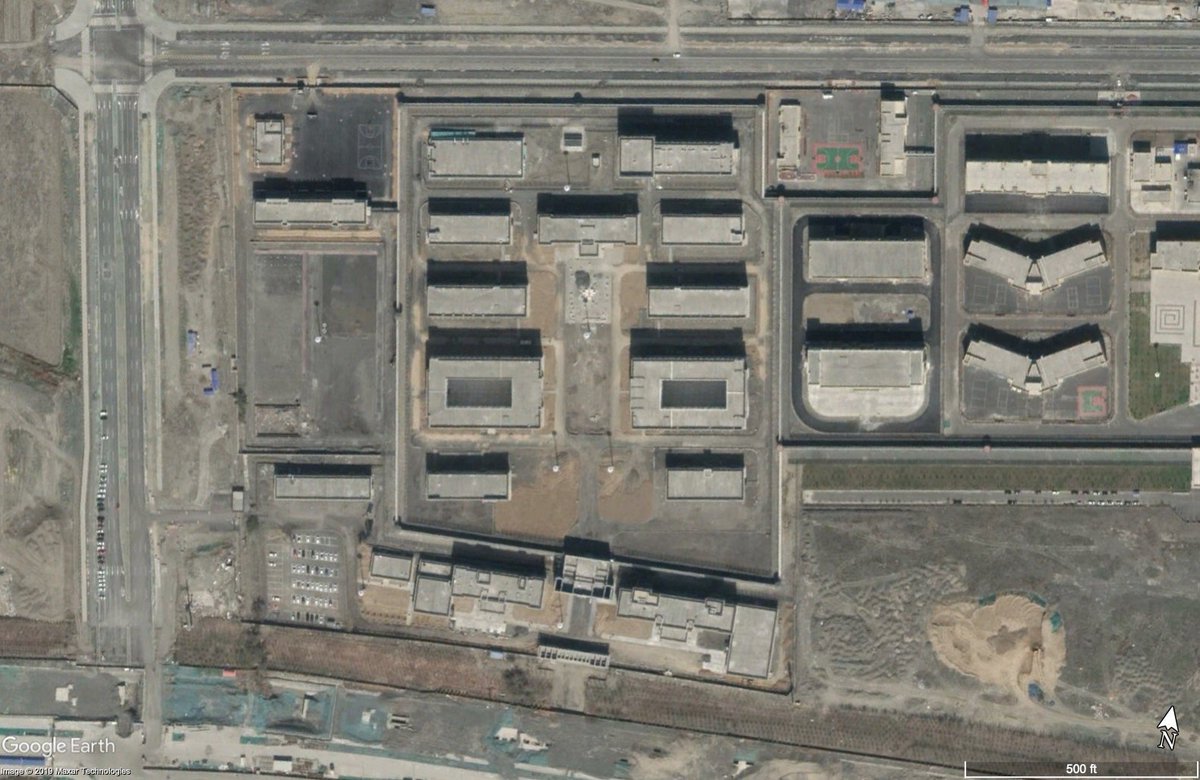 It's difficult to be certain if these sites are prisons, detention centers for suspected criminals, high-security education camps, or a combination of such facilities. Why? My colleague @ckoettl outlined it as following 👇

Basically, there seem to be different layers of restrictions visible in the design and outlay.

Here's a detention facility in Beijing (so not in Xinjiang). The compound is small and mostly packed with cell blocks. These facilities resemble “classic” prisons. 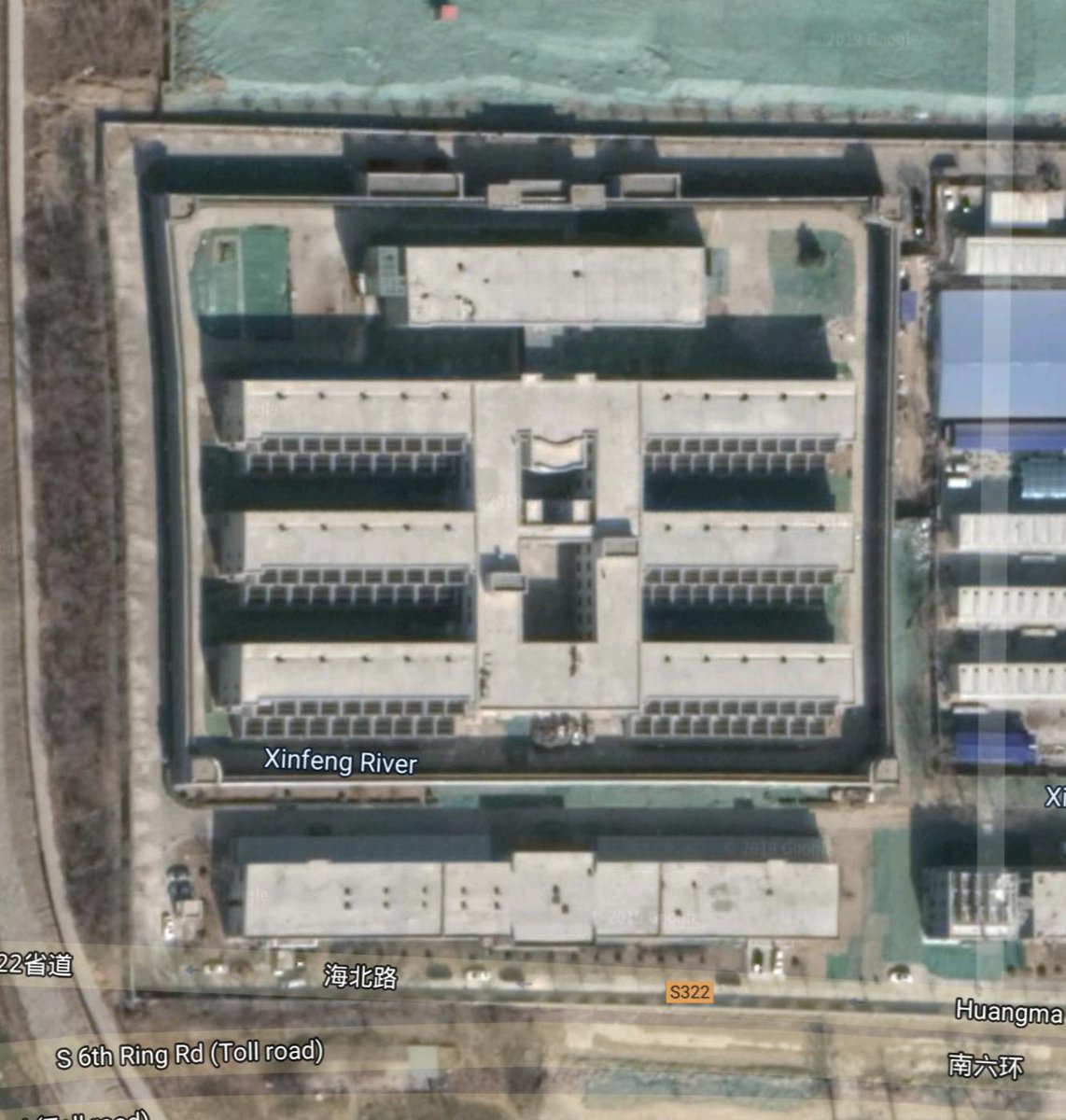 Besides these “classical” prisons, there are facilities in Xinjiang that are much larger and different in design, e.g. more open spaces and dorm/classroom-like buildings. Some of those locations have been confirmed to be “re-education camps”. Here are four similar layouts. 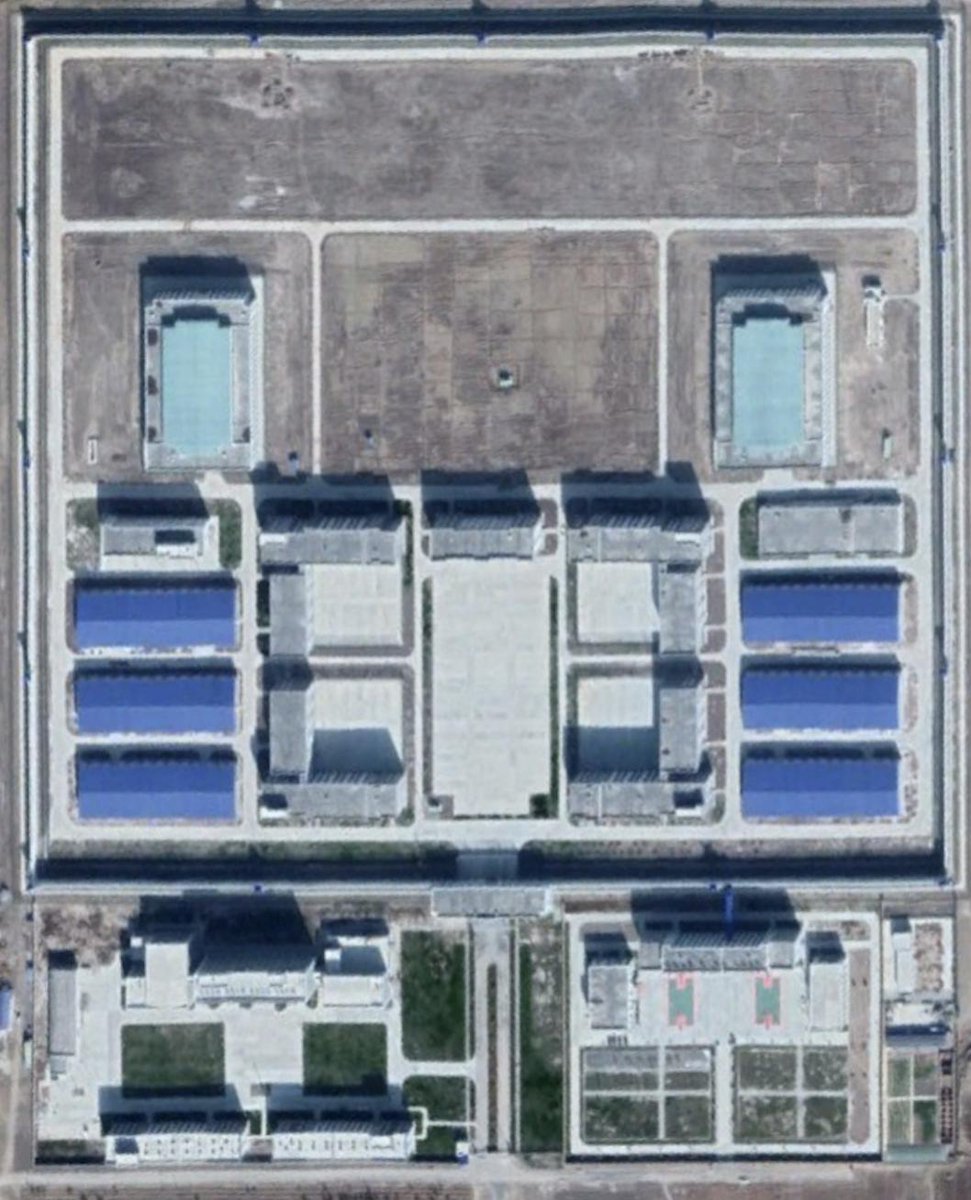 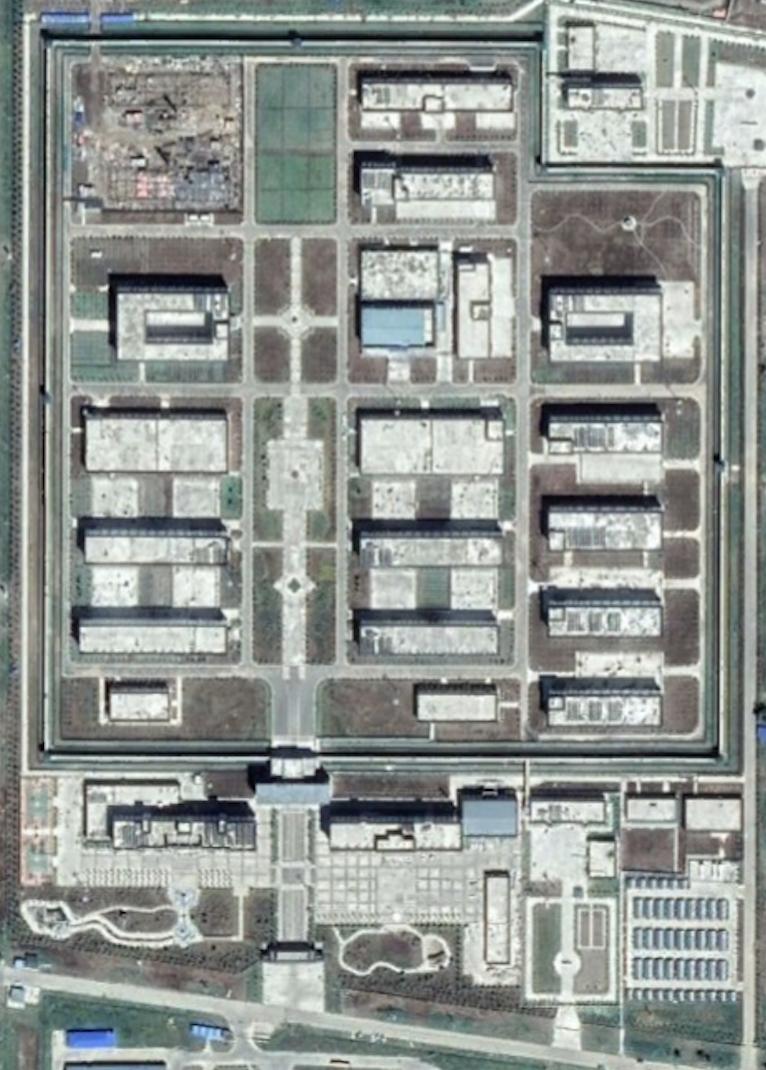 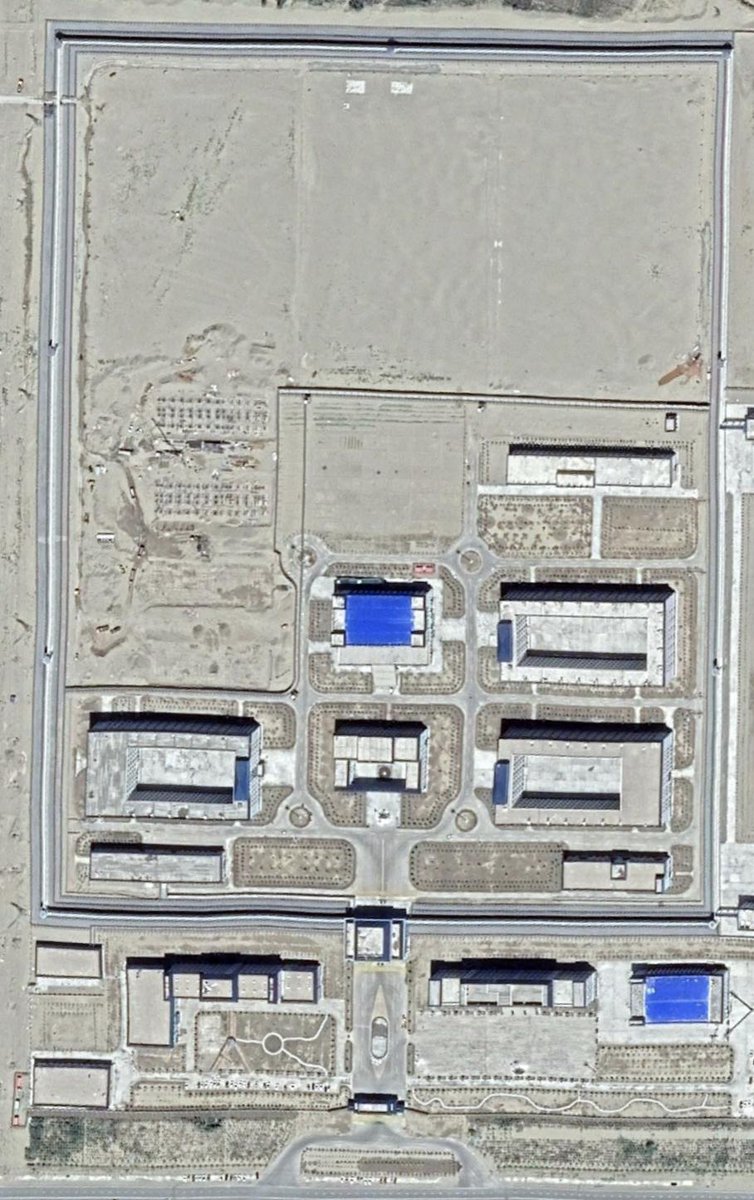 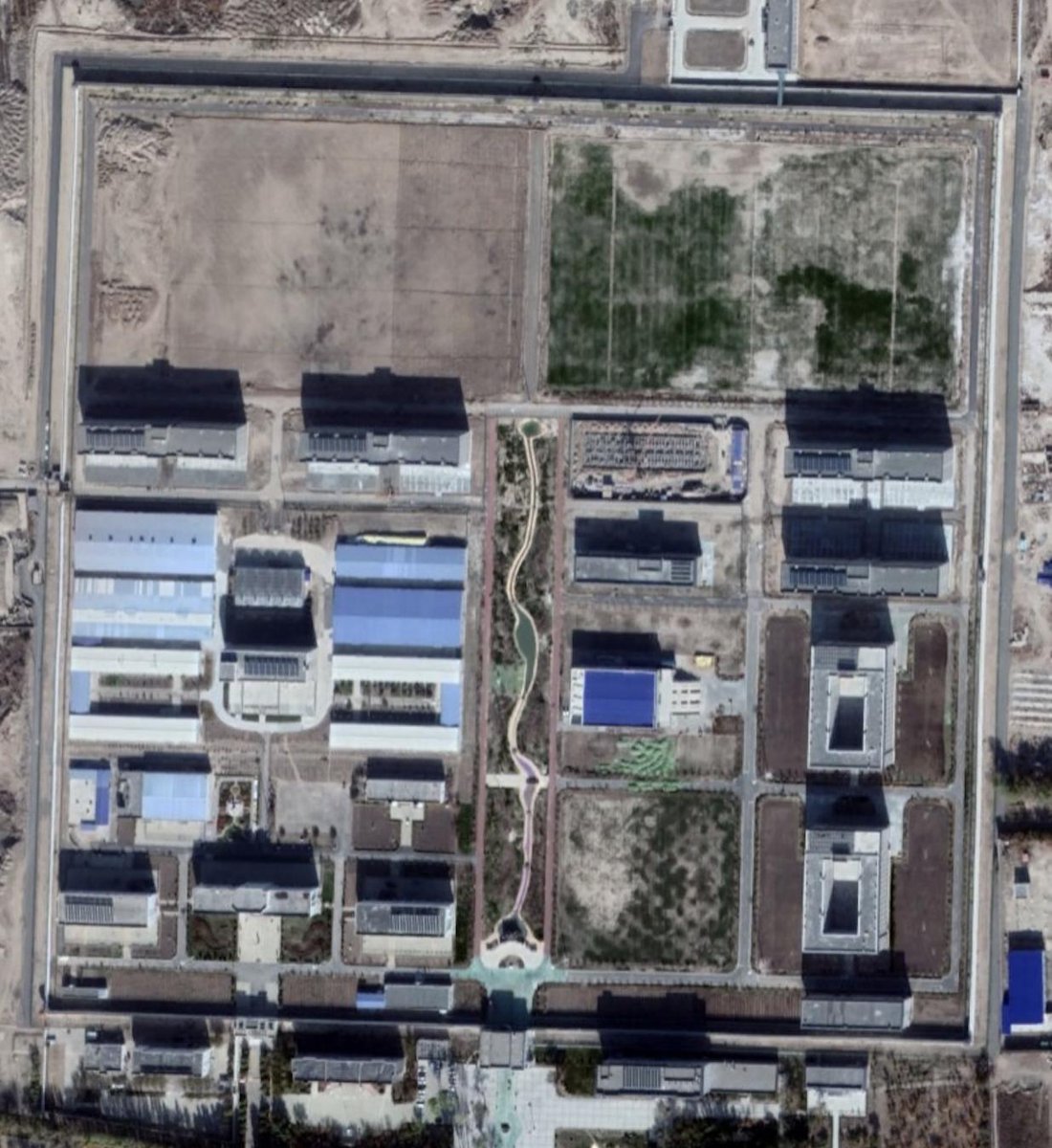 Some “classic prison” facilities are next to “campus like” facilities. Some “campus-like” are connected to apparent factories (related, this from @ASPI_org  https://www.aspistrategist.org.au/what-satellite-imagery-reveals-about-xinjiangs-re-education-camps-and-coerced-labour/ …). And we even found that some previously reported “re-education camps” were apparently demolished.

As mentioned before, it's difficult how to label (and understand) all of these facilities — except for them being heavily guarded detention centers. @ckoettl and I welcome your thoughts on all of this. Our DMs are open (and via that also more secure ways of communication).