1. Scoop: Former CIA Officer @amaryllisfox has a book coming out in Oct about her time at CIA. But sources tell me she has yet to receive clearance from CIA to publish. The issue? Copies of the book have already gone out, likely violating federal law.

2. An excerpt of @amaryllisfox's book was also published in Vogue. It's unclear if that excerpt was cleared for publication by CIA. Publishing an excerpt that contains information about CIA or intel matters without clearance would violate her CIA agreement  http://bit.ly/2lEp04A

3. CIA is quite clear that sharing any info about intel matters or the CIA with outsiders, in oral or written form, without review from the CIA Publication Review Board, is a violation of the national security agreement individuals sign before joining CIA 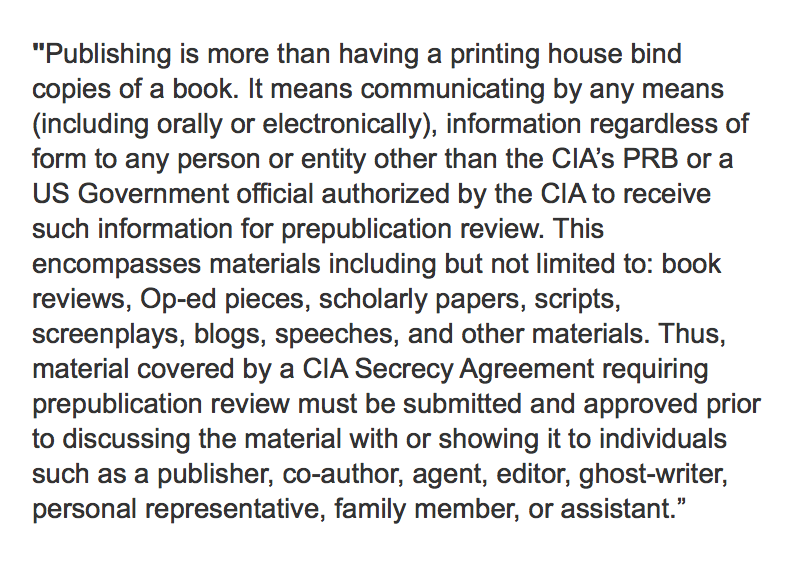 4. Further complicating matters for Fox, she sold the rights to her book/life to Media Res, a production company, which sold the project as a series to @Apple.

@brielarson is starring in and producing the project.

5. If Fox shared a copy of the book or offered guidance to the producers that involved CIA or intelligence matters, without CIA clearance, she would be in violation of her national security agreement.

I've reached out to Apple and Media Res for comment  http://bit.ly/2lEp04A

6. Fox has submitted her book for CIA review but has not yet received clearance

“Our understanding is that Amaryllis has coordinated with the PRB throughout the process of writing her book, from the proposal through the final manuscript"