I remember that moment clearly.

I was sitting in front of a psychiatrist, explaining to him how I’d wound up in the ward.

“And I’m transgender,” I explained hesitantly. “I use he/him pronouns.”

He told me I was psychotic and bipolar (I was neither). He said that he couldn’t, in good conscience, allow me to continue taking testosterone if it might “exacerbate my illness.”

“But I’m trans,” I explained. “Being without my hormones will worsen my mental health.”

I am 5150’d, meaning I am confined and cannot leave the ward. I step out of the psychiatrist’s office. I overhear him explaining my “condition” to the nurse.

A flash of red.

“My pronouns are he and him. I am transgender. I told you that.” A nurse walks over, trying to usher me away, telling me to keep my voice down.

I stare at him. If looks could kill, he would be dead.

With the full force of my (unbound) chest, I tell him, “Almost half of us attempt suicide. We are your patients. I won’t be the last one. Do you really want to perpetuate the trauma that lands us here in the first place?”

Today, this was on my newsfeed. 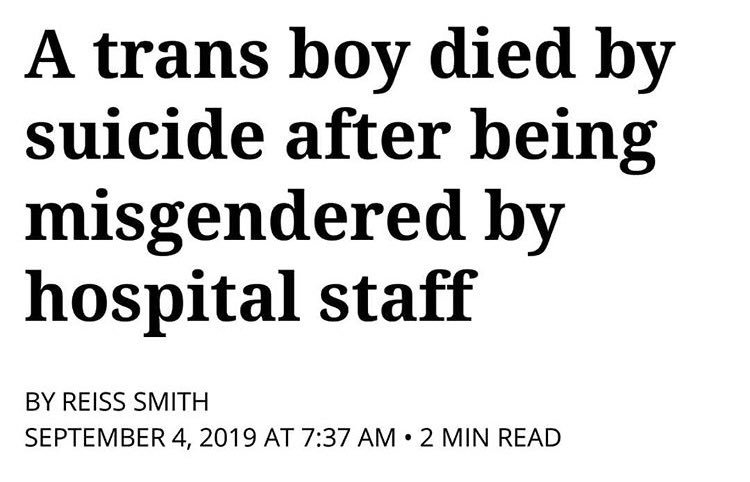 Like me, he was in a psych ward, a place that was supposed to keep him “safe.” On the brink of death, he tried to get help, just like I did.

They made him worse.

They made me worse.

And these were the same people that would determine when I was allowed to leave.

The same people telling me to “lower my voice,” “be patient,” “try to understand”

I need you to understand what it’s like to be stripped of your shoe laces, a shower door, and locked away with your own name stripped away, too.

To wear three hospital gowns simultaneously to try to hide the chest you want to desperately claw away.

You would want to die, too.

I did not get better. I pretended to so that I could go home, so that the anguish and dysphoria could at least be contained. Where it might be quieter. Where I did not have my blood drawn while I was asleep, waking up to find they’d taken even more from me. Always more.

It doesn’t matter if you understand why being misgendered is so acutely painful. How dehumanizing it is to have a flashlight in your face every 15 minutes at night, to have everyone insist you’re a woman even when you tell them, “This is what hurt me. This is the trauma I carry.”

You cannot tell me this is mental health care. To do harm to someone who is at their most powerless, most vulnerable, most fearful, raw, bruised place.

To say “participation” is what determines “compliance,” but “compliance” is relinquishing who I am and retraumatizing myself.

“Be patient,” they said to me. If I roll over, the trans boy coming up behind me layers his hospital gowns, hoping they swallow him whole so that his body finally disappears, and throws his fists into his pillow until they give him a cup of pills to put him to sleep.

Or he plays the game like I eventually did, becoming the model patient, and goes on to roll the dice outside... and maybe he lives — or maybe he dies.

When I demand trans-informed care, you better fucking believe that when I say it’s life or death, I say it with the gravity it deserves.

There was a future for this boy; it was dismantled the moment he stepped into their care.

There are no excuses. There is too much at stake.

I am one of the ones that lived.

There are many, many more that didn’t.

And tonight, the wound feels as fresh as it did the day I cut my hospital band off my wrist with the kitchen scissors and said, “I would rather die than do that again.”

You can’t heal a wound if the doctors pull out the stitches seconds after they put them in.

You can’t feel safe in a place where trauma is as pervasive as the air you breathe.

Trans people deserve so much more than “be patient.”

ETA: So many beautiful responses to this. So many painful ones, too. Thank you. ❤️

I want to make sure folks know: I am alive in the fullest sense of the word. I have a wonderful life now, and I just wish that this boy had been given the same joyful future that I have now.

Just a few years later, I work as the lead editor for mental health content at @Healthline, where each day I get to work with folks living with mental health conditions to create content that empowers them. My pain became my purpose and my power.

That boy deserved the chance to take that pain and transform it. Or better yet, have real safety, so that it was pain he didn't have to carry in the first place.

I won't stop fighting for stories like his to be heard, and for a safer world for him and others like him.