Tren Griffin+ Your Authors @trengriffin I work for Microsoft. Previously I was a partner at Eagle River, a private equity firm established by Craig McCaw. I am on the board of directors of Kymeta. Sep. 08, 2019 1 min read + Your Authors

Boeing shrunk a 3,750-kilogram satellite to 1,900 kilograms dry mass by moving from 4,500 components and nearly 1,300 radio-frequency cables to 348 components and 64 cables. No more traveling wave tube amplifiers (no relationship to the Traveling Wilburys!) https://spacenews.com/boeing-unveils-small-geo-product-as-part-of-new-702x-satellite-lineup/ …

In traditional satellite manufacturing the process took place in a "high bay." Bunny suited assemblers scampered around as if it was a giant religious icon, assembling each one manually. The assumption of the manufacturers was that lower satellite prices wouldn't increase demand. 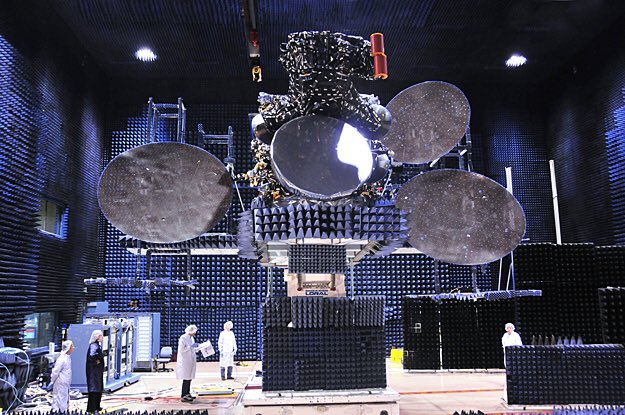 "Orders for new GEO satellites have plummeted: less than ten were ordered last year and no more than about ten are expected this year."  http://www.thespacereview.com/article/3570/1  This has significantly reduced the need for commercial rocket launches. SpaceX launches will be flat or down in 2019.

The Travelling Wave Tube Blues by the GEOs