Since you died, I haven’t been able to stop sending you messages. 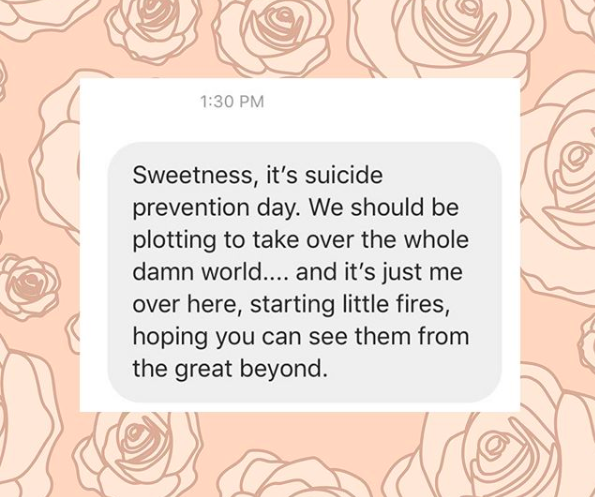 They’re less frequent than before, but I think I get scared that you’ll somehow evaporate if I don’t keep reaching for you — not unlike how, when I let myself get distracted for too long, they kicked down your door in a failed attempt to save your life.

I’d always thought you and I would fight this together. I imagined us burning the stigma down to the ground, and in its place, we’d plant a garden. A garden where safety, vulnerability, and care could bloom, unruly and wild and free.

Is that where you are now? In the garden? Are you dancing on your own — or did you find your father?

I didn’t know that grief could dismantle someone’s life so completely. But I do believe, when the first domino fell and you left this world for another, you left me with some of your light.

And I’ve kindled it, magnified it, nurtured it — I’ve surrendered to it so completely, I may as well have shed my entire skin at once, leaving a shell of the person I once was to dissolve.

It wasn’t just suicide. We both know that. It was the weight of being a transgender person in a culture that wanted you erased.

It was the unspoken cost of having to ask yourself a thousand times over, “Can I be myself today — or is that too much?”

Which was a roundabout way of saying, "Maybe *I’m* too much," and truth be told, you were in the sense that this world didn’t deserve even an ounce of your magic, as it refused it over and over and over again.

Because until we are, we’ll go looking for liberation elsewhere, and on the dark, frayed edges of the universe, there’s a quiet, velvety promise of Nothingness.

And while I will never again choose it, I understand why you had to.