(Thread) A Crown or Prison?

Much of Twitter believes it’s an obvious truth that Trump’s mental instability makes him unfit to govern.

Meanwhile, Trump’s supporters like his personality over his policies. The article is here:
https://beta.washingtonpost.com/news/politics/wp/2018/08/23/by-a-3-to-1-margin-trump-supporters-embrace-his-personality-over-his-policies/ … 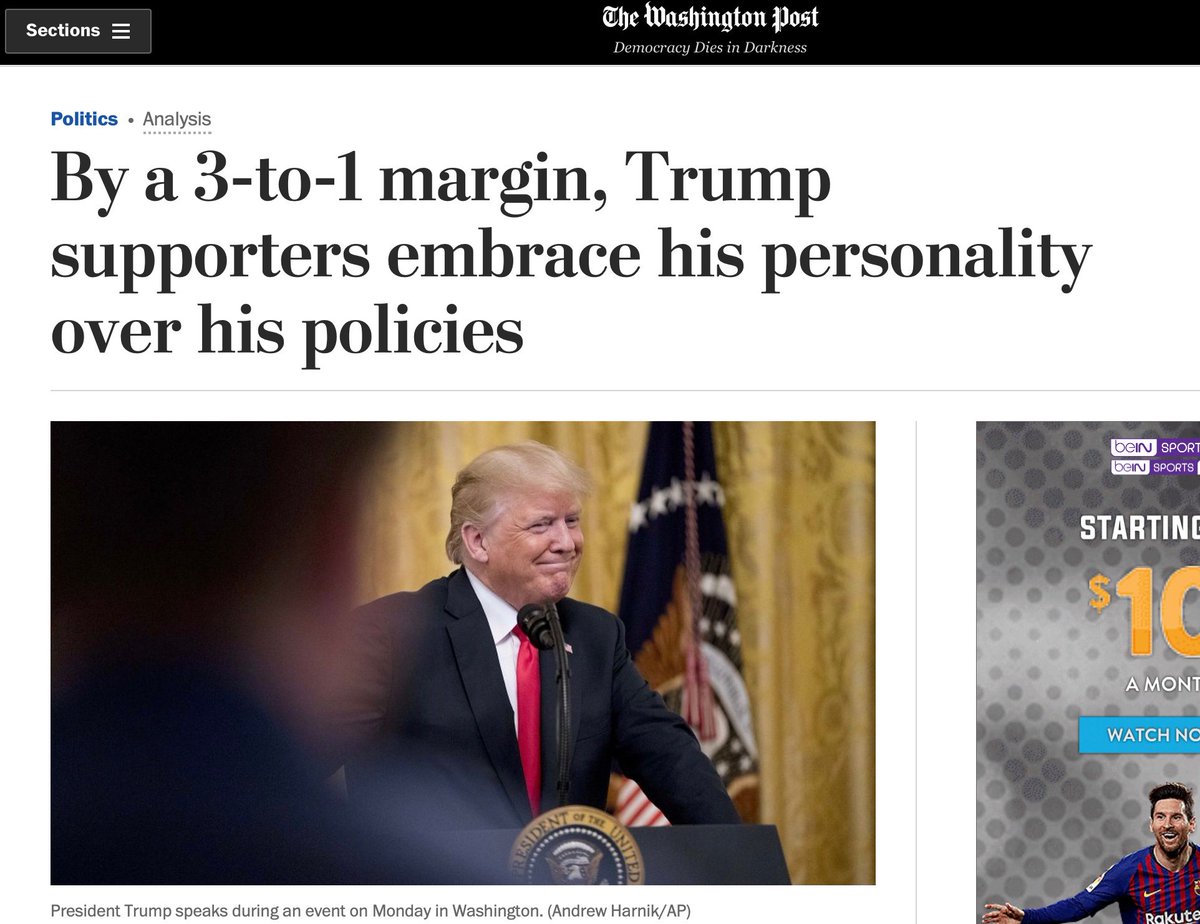 Some believe a Trump dynasty will last generations.
https://www.youtube.com/watch?v=AoGyOHtpInQ …
Others wonder if the Trumps will be hauled to prison.

💠Charisma: Authority derives from force of personality; the leader evokes emotions and loyalty. Also known as a personality cult.

3/ If you expect Rule of Law, Trump appears chaotic, insane, and impulsive.

If you prefer Charismatic Leader, Trump appears brave and bold, unafraid to act on his instinct, willing to sweep away any and all impediments.

4/ What most of us see as a dumpster fire, Trump devotees see as evidence that he is ruling by instinct—and that his instinct is superior to rational thought.

Most of the GOP prefers Charismatic Leader because someone like Trump is better able to achieve their reactionary goals.

6/ Before the Civil Rights and women’s rights movement, power was in the hands of white men—therefore, reactionist politics in the U.S. necessarily means returning to white male rule.

In fact as well as myth, bygone America offered much liberty—for white men.

7/ When the frontier was open, they could grab land.

Before 1863, they could grab people and enslave them.

8/ There weren’t regulatory agencies or many regulations, so (white) men could cheat.

They could manipulate markets, fix prices, and launder money.

How do you think the Trump’s got rich?

They understand these regulations even the playing field and allow all people to to participate.

10/ To return to the “good old days”—reactionaries need to destroy all those laws and agencies.

11/ How do you transform the complex and sprawling American federal government—with its alphabet soup of agencies—into “limited” government?

You can dismantle slowly, or you can bring in a wrecking ball.

12/ Remember, David Koch advocated dismantling the FBI and the CIA, among other things.

A "charismatic leader" like Trump is a more efficient vehicle for reactionist politics than Rule of Law.

13/ You can’t dismantle the laws while obeying the laws.

That's why the GOP doesn't mind the lawbreaking.

Deep state=intelligence and regulatory agencies (the things that interfere with their “personal liberty”).

14/ Michael Cohen described the feeling of being in a leadership cult:

“Being around Mr. Trump was intoxicating. When you were in his presence, you felt like you were involved in something greater than yourself — that you were somehow changing the world.”
https://www.politico.com/f/?id=00000169-2d31-dc75-affd-bfb99a790001 …

15/ The key to understanding many of the Never Trumpers is that they're still reactionary—but they know that Cult of Leadership will fail electorally, mostly because Trump is too erratic.

Mark Sanford chief objection is that Trump is driving up the debt.
https://www.nytimes.com/2019/09/09/opinion/mark-sanford-2020.html …

16/ As I read this⤵️, Walsh is saying that if the election is a referendum on Trump and his fitness, Trump will lose.

If it's about Trump's policies, the Democrats will lose—meaning that the Democrats are on the wrong side of the issues. Get rid of Trump and the GOP is fine.

17/ Be cautious of the people who harp on Trump’s unfitness, as if that’s the only problem and when Trump is gone, the GOP will be normal again.

In fact, Trump comes from decades of GOP reactionist politics.

Trump took decades of subtext and made it text.

I wonder if Conway and pals—who supported Trump in 2016—would have changed their stripes if Trump wasn’t heading for electoral defeat.

There's a tendency to overestimate Trump (“He has destroyed our democracy! All hope is gone!”) and underestimate him (“It should be clear to everyone that he's unfit.”)

The GOP's reactionary base is shrinking, but they remain a powerful force.

In response to some comments: Preferring Rule of Law to leadership cult doesn’t necessarily mean a moral compass.

Slavery, Jim Crow, and women as chattel happened under the law.

The question is enter people like Conway embrace rule of law because of principle or expediency.

For that I think we have to look partly at their history.

To evaluate a person’s moral compass we have to know what laws they prefer, not just what form of authority.

All my threads are also blog posts. You can view this one here:  https://terikanefield-blog.com

I fixed a few errors, worked the comments into the text, and gave it a catchier title.