What the heck happened in North Carolina?

The trickery was shocking, but no surprise given NC's history.

1/ In 2011, the GOP-held NC legislature approved a racial gerrymandering that diluted the votes of African Americans to maximize GOP seat gains.

It's what Levitsky and Ziblatt call Constitutional Hardball.

It comes from desperation, from knowing that . . . 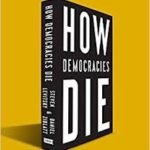 The GOP morphed into the party of (largely) white Christians.

Because their base is shrinking, they can see that their medium and long-term prospects are not good.

3/ The Democratic Party, OTOH, is now the party of urban intellectuals, minority communities, and young people.

4/ As the GOP watches its long-term prospects diminish, it is becoming increasingly desperate and sees possible defeat as catastrophic.

The GOP is therefore willing to use any means necessary (including obstruction and lawbreaking) to stop them.

5/ It's obvious to me that these desperate tactics won't work for long.

Prof. Levitsky says to treat what we're going through the way we would an earthquake, as we make the transition from a white (Christian) male dominated country, to a multicultural one.

6/ Making the transition from white male rule to multicultural rule requires passing through a period of intense polarizing reaction.

We're in that now.

The earthquake is rattling our institutions.

7/ In an earthquake, we rush to strengthen the battered structures so that there will be less rebuilding later.

The antidote to the kind of anti-democratic behavior we're seeing in NC and elsewhere is MORE democracy.

You don't fight an earthquake by increasing the shaking.

8/ You resist an earthquake by holding steady, and quickly reinforcing weakened structures.

The thing to do is get busy.⤵️

I take my own advice. Right now I'm volunteering as a lawyer working on voter protection.
https://terikanefield-blog.com/things-to-do/

I doubt the courts will get involved in the proceedings of a co-equal branch of government.

The only solution is to vote these guys out . . .

10/ . . . which is why all my volunteer hours for the next 14 months are in voter protection work.