(SUMMARY) For the first time in history, someone outside the intel community has engaged in acts threatening national security; the intel community knows of it; whistleblower paperwork was properly filed; and Team Trump is illegally hiding it from Congress  https://intelligence.house.gov/uploadedfiles/20190913_-_chm_schiff_letter_to_acting_dni_re_whistleblower_-_subpoena.pdf …

(SUMMARY2) In view of the foregoing history-making cover-up in the US intel community, the House Permanent Select Committee on Intelligence has taken the extraordinary step of publicly indicating it believes Trump or his team committed the acts in question  https://intelligence.house.gov/uploadedfiles/20190910_-_chm_schiff_letter_to_acting_dni_maguire.pdf …

(SUMMARY3) The House Permanent Select Committee on Intelligence must now pursue emergency legal process—via both a subpoena and, I imagine, a suit for immediate legal relief when that subpoena is inevitably ignored—to *protect* U.S. national security from the Trump administration 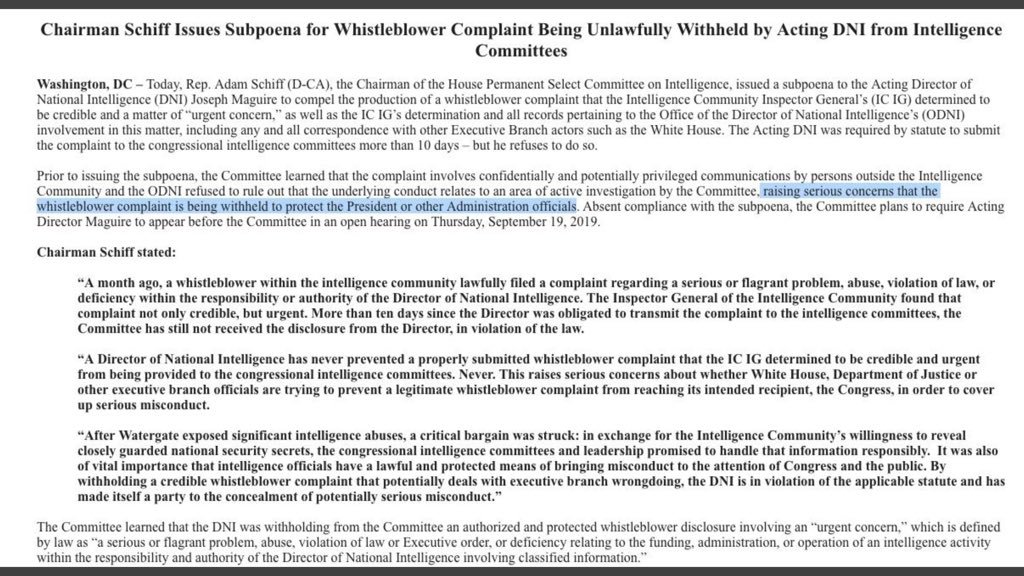 (SUMMARY4) Because this has never happened before, and the Inspector General for the intelligence community has confirmed to Congress that the whistleblower's paperwork was properly filed—and that Congress is entitled to it—only an extraordinary coverup explains what is happening 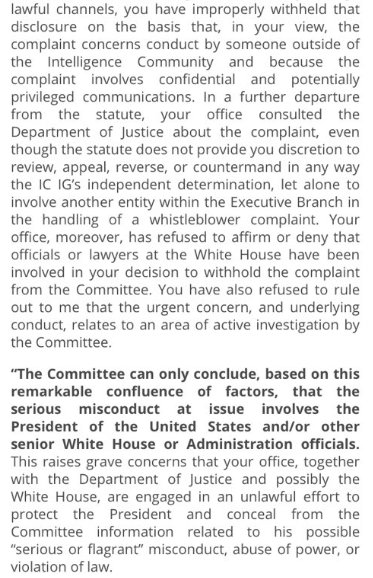 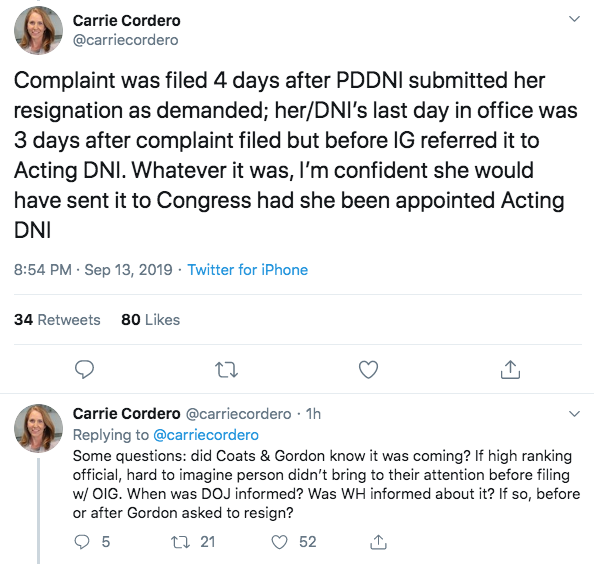 (SUMMARY6) This revelation comes at the end of two straight weeks of Trump endangering national security in spectacular fashion, with the release of classified intelligence on Twitter, needlessly angering murderous in-theater Taliban soldiers by insulting their leaders, and more

(SUMMARY7) It can hardly be doubted that the president is a clear and present danger to national security—as that's been proven to Americans near-daily by the president's unhinged, contemptuous-of-US-intelligence behavior for two years—but there are fears that it's getting worse

(SUMMARY8) The research for my book PROOF OF CONSPIRACY suggests the President of the United States is not loyal to the United States—and that he and his family have put their interests above the safety and security of US families; the intel the House is asking for may prove this

(SUMMARY9) Revelations that Trump is only considering those inside his circle of trust—who know about his international collusion, particularly in the Middle East and with Russia—to replace NSA John Bolton only increase fears that Trump is lying to America about what he has done

(SUMMARY10) Americans must stay atop this story, as Congress is being kept in the dark about a national security issue the intel community's Inspector General terms "urgent" and that Trump's administration is illegally—and in a way never before seen in US history—withholding /end