Ad Astra was the first film I watched where I truly felt like I was watching Pentagon propaganda. The U.S. Space Command emblem, albeit the old one, was plastered across nearly every single scene.

A really visually interesting movie, that just seems to miss the mark in every plot line. It captures a highly-utilitarian, retro vision of space, overlaid on a satirical dystopia. Every scene is motion-blurred to oblivion, and it isn't deserving of IMAX. It is no Interstellar.

There is something about the way technology in Ad Astra remains so prominent, yet so invisible and separate, that makes it a really compelling projection of the future. Like Her. But that escapism is near-instantly interrupted by a Spacecom logo smashing you in the face.

Maybe that Pentagon disruption is exactly what Ad Astra is trying to articulate, at least that is what the director implies. But it also premiered the same day President Trump officially established U.S. Space Command. And the owner of the film? Disney.  https://www.cnet.com/news/ad-astra-brad-pitt-space-movie-grappled-with-ending-the-moons-color-trump/ … 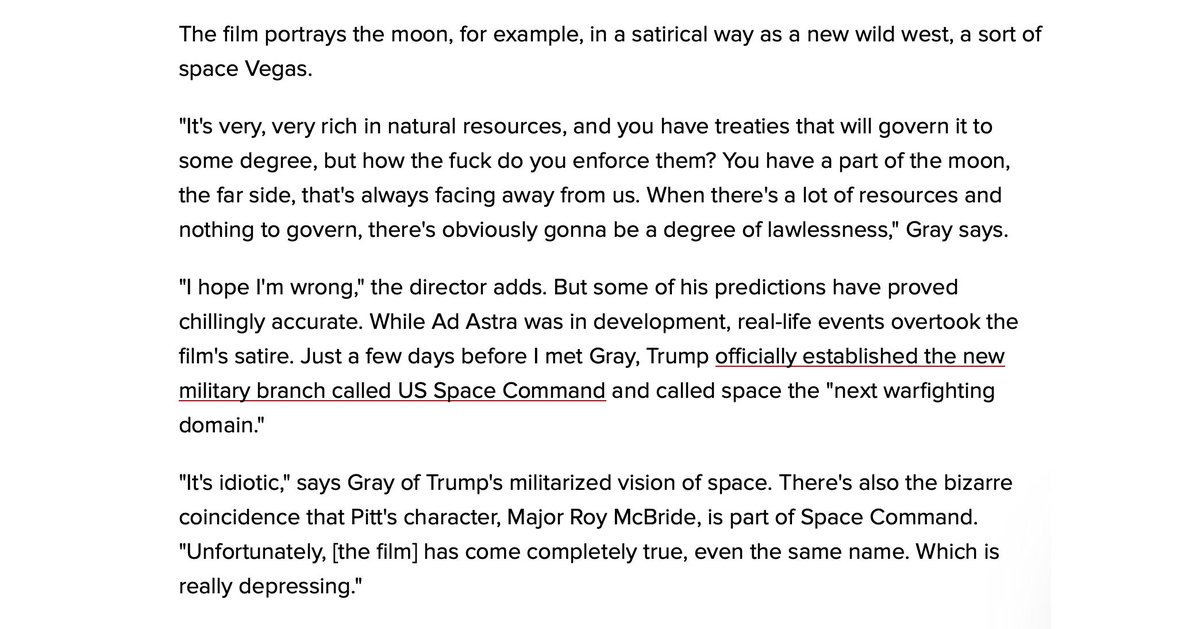 Disney's Marvel is the most successful platform for the Pentagon's messaging, beginning long before Iron Man, but gaining a new life as Tony Stark turned his back to those mountain-side munition explosions in the Middle East back in 2008.

That's no conspiracy, and we rarely see it recognized. Since 1989, under Philip Strub (now David Evans) the DoD has collaborated on hundreds of films. A lot of Hollywood's humvees, aircraft, & military bases are borrowed. Sometimes the scripts are altered.  https://theoutline.com/post/3794/hollywood-propaganda-12-strong-phil-strub?zd=1&zi=w646r43j …

Is the Pentagon's Hollywood liaison office as transparent as the AI books staged on Xi Jinping's bookshelf, or Vladimir Putin's annual calendar that captures the image of a healthy, strong, larger-than-life leader, while a man ages at the helm of a country w/o a succession plan? 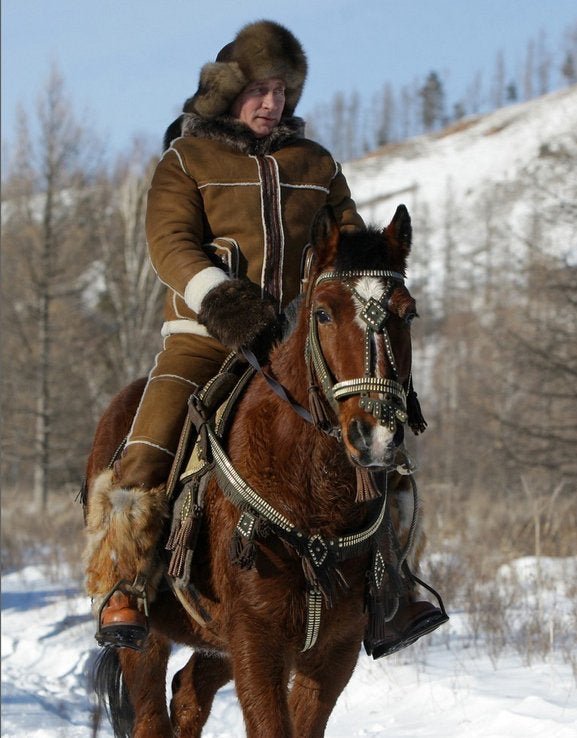 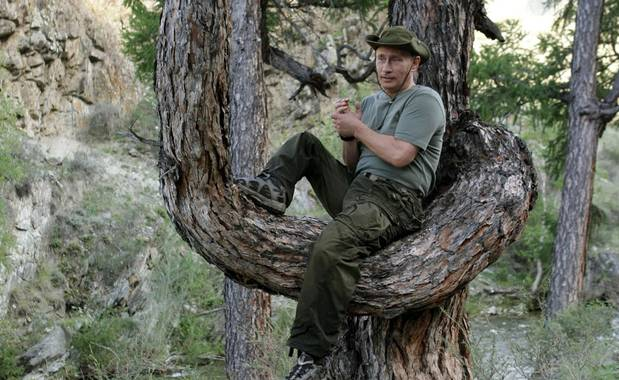 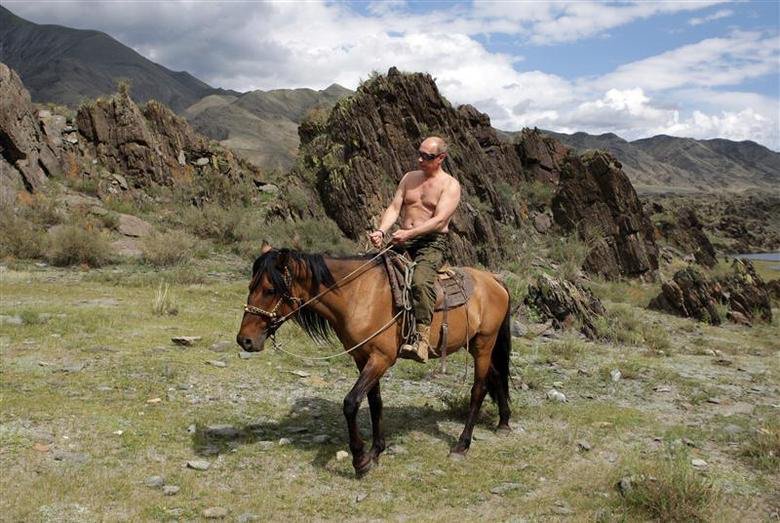 I don't know the answer to that, but it often feels like no one cares, while American military soft propaganda continues to bubble and sprawl. It may be that this silence and lack of will is more dangerous than Putin's outdoor adventures and Xi's AI dreams.

We have never before witnessed something like the DoD's involvement in Captain Marvel. Buried beneath a message of badass women and long-overdue equality is propaganda as real as propaganda gets, tuned for what sells — and what we should want to sell.  https://twitter.com/i/moments/1142750962152591360?s=13 …

While Hollywood continues to sell a vision of a highly advanced dominate global military power, the real Pentagon faces real problems. Recruiting numbers are declining. Tech is diverging from the defense sector's smoke and mirrors. And everything & everyone is getting hacked.

Captain Marvel appears to have been a success for the U.S. Air Force, for exciting a generation of badass young women. But today it is the coder and engineer that slaps, the hacker and her hijacked drone, not Brie Larson behind the sticks of a Super Hornet.

It sometimes feels like we're watching — quite literally — a run away fever dream and mirage of the future, of what influential bodies like the Pentagon want it to be, rather than what it will be. That feels unhealthy, and dangerous — and maybe not-so-soft propaganda & power.

It feels like Ad Astra wanted to say this message, but then it was bought by Disney, delayed twice, while a hundred VFX artists rotoscoped & rendered more and more and more U.S. Space Command badges. We didn't have to wait for Spacecom's Marvel debut.

The plot & message of Ad Astra was so disconnected that there really was no villain, or hero, or really, continuity. The U.S. Space Command was the enemy, briefly, but then it became the last hope — the arbitrator of necessary evil, & it was like the film wanted us to accept that

What I saw & felt was oddly disconnected from the director's words. Much of the dystopia projected in the trailers never made the edit. As it nears, a force pulls you back to drown you in emblems & camo. Throughout the entire film, all I could think was: whose film am I watching?

If this is the future someone at the Pentagon wants us to accept, or the future the director sees barreling towards us, I think we should be more concerned by that. The world will pave over it — and all I can hope is that Elon's Ad Astra wins.

I was 1 of 3 people at the IMAX, stadium-seating showing of Ad Astra tonight. If this two-layer dystopia represents the future of Hollywood — a played-out, lazy, steered cash grab — while the real world grows darker, then good fucking luck to Disney+.

will just leave this here 🙃

“Lockheed offered its advice for free, as did NASA, which also gave the production stock footage and photographs. Both Lockheed and NASA said they viewed their initial involvement as an investment in America’s future technology workforce.”
http://dlvr.it/RDVZQm