People are forgetting that we previously learned that there was a secret Trump administration effort to get Ukraine to drop its investigation of Paul Manafort, the man whose legal jeopardy Trump once said was the only thing that could bring him down. This Ukraine thing is a saga.

1/ Moreover, part of the Right's ludicrous "Spygate" conspiracy theory sees Ukraine secretly helping Clinton during the '16 election, so Trump (and allies like Giuliani) have engaged in a *third* secret course of conduct with Ukraine involving trying to prosecute Hillary Clinton.

2/ And lest we forget, in January '17 Michael Flynn and Michael Cohen were involved in a plot to negotiate sanctions relief for the Kremlin through a pro-Kremlin Ukrainian politician. A Special Counsel could investigate all four of these criminal Ukraine incidents in great depth.

3/ A Trump-Ukraine Special Counsel would have a great deal of work to do investigating the following linked matters:

4/ And s/he would also investigate the following:

5️⃣ Obstruction relating to any of the foregoing four Trump conspiracies

Sounds familiar, doesn't it? Almost like he's engaged in all the same behaviors again, but now has no chance of getting off by saying he didn't know better.

5/ The evidence is there: Giuliani admitted his role in two of the plots on TV last night; Trump admitted his intent to commit such crimes (bribery, obstruction, illegal solicitation of foreign donations) to ABC; and the whistleblower is a known witness the FBI needs to talk to.

6/ I'd always wondered what lawless former lawman Giuliani got up to after he was done criming in the October 2016 "Trumplandia" scandal involving illegal, election-shifting FBI leaks to the Trump campaign. Thanks to @PortlusGlam, we even have a graphic that starts to explain it: 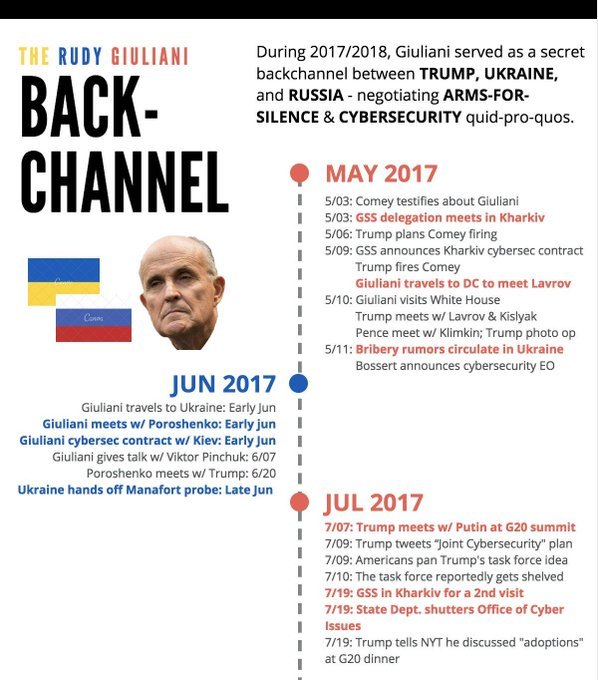 7/ "GSS" stands for "Giuliani Safety & Security." Remember when president-elect Trump was about to name Giuliani his Cybersecurity Czar? We can now see that that was an attempt to bring Rudy's crime spree *into the White House* and make it easier to conduct in a clandestine way.