As the Whistleblower issue unfolds, let’s talk about Trump’s defenses.

How do I know?

You can't plan a traditional defense while thumbing your nose at the law.

1/ Instead, he intends to defend himself with the "deep state" defense, declaring himself a victim, and undermining truth by unleashing a Firehose of Falsehoods.

Defense #1: The Deep State Defense, which goes like this:

The government is stuffed with Trump haters who are . . .

In fact, government is staffed with people trying to uphold rule of law in the face of Trump’s lawlessness.

The “deep state” are the regulatory and law enforcement agencies.

The far right wing and reactionaries HATE them.

3/ The current GOP is a reactionary party. See:
Reactionaries feel a “forceful desire” to return to the [mythic] past.

To take us back, they have to dismantle all those agencies and regulations.

Going back to the past means white male rule, because that’s what we had.

5/ A lot Trump's crimes are things the Right Wing doesn't believe SHOULD be crimes. So they see nothing wrong.

They look back to a time before the New Deal, and the Civil and Women's movements, when [white] men had great "personal liberty."

6/ The "Deep State" defense is related to the “We Are Victims” defense.

Reactionaries believe something vital is being taken away from them.

That's why they see themselves as victims.

Important: These defense resonate on the far right wing.

7/ The GOP will also any Trump supporters who suffer consequences as victims.

Defense #2: The Democrats Did Worse. It looks like this👇

The idea is to make the Democrats look like the Republicans. If there is no difference, it doesn't matter who you vote for, or IF you vote.

8/ If all politicians are corrupt liars, you may as well stick with your team's liar. "He's a liar, but he's OUR liar."

Defense #2: The Firehose of Falsehoods.

Undermining truth is the time-honored way of securing total power.

9/ Without truth you can't have rule of law.

We know how to fight the Firehose of Falsehoods in the public sphere. See:

Be prepared: When the GOP Senators control the trial of Trump, they will unleash a firehose of falsehoods on the court.

10/ People will get confused. It will be impossible to counter each lie.

A liar has an advantage: He can reel off several lies in a minute. Refuting each can take hours.

Playing whack-a-lie wears everyone out.

The liar can also make the story compelling and good soundbites.

11/ I hear people say, “When hearings are televised, as in Watergate, the American people will see the truth.

We may see a confusing spectacle.

Plus Trump has Fox.

John Dean has said that Nixon might have survived if he’d had Fox News.  https://www.politico.com/magazine/story/2018/01/02/john-dean-nixon-might-have-survived-if-thered-been-a-fox-news-216207 …

12/ My point: Unrealistic expectations about what will happen when Trump is impeached and the Senate holds a trial abound.

And unrealistic expectations are dangerous.

When hearings don’t look like an episode of Perry Mason (OK I dated myself) people will blame the Democrats.

Remember that a goal of Russian Active measures is to undermine confidence in democracy.

Check out 538’s aggregate of Trump’s approval over time.
https://projects.fivethirtyeight.com/trump-approval-ratings/?ex_cid=rrpromo …

14/ Not much has budged Trump’s numbers over 2 years.

If nothing changes, 2020 will be a blood bath for the GOP.

People are fleeing the party.
The GOP base is shrinking, so their long and medium prospects are dim.

It's important to see that their tactics come from desperation.

15/ The demographics of the Democratic Party (diverse, intellectual, urban, progressive) are expanding.

The future belongs to the Democrats—if they hold steady as the party of democratic values.

Wanna know what you can do to help?

💠Don’t spread gloom and doom. It undermines confidence in democracy.

💠Do pressure your reps. We all want more on board with impeachment. But this isn't the time to slam Democrats. For why some Democrats are reluctant to embrace impeachment, see:

💠Don’t spread unrealistic expectations, which leads to disillusionment, which in turn undermines confidence in democracy.

💠Most important: Get busy. See:  https://terikanefield-blog.com/things-to-do/

Sigh. I used to answer lots of questions.

(Did I ever advocate "doing nothing?")

Now it's too hard to find the thoughtful probing questions.

This, by the way, is how chaos and the Firehose of Falsehood works. 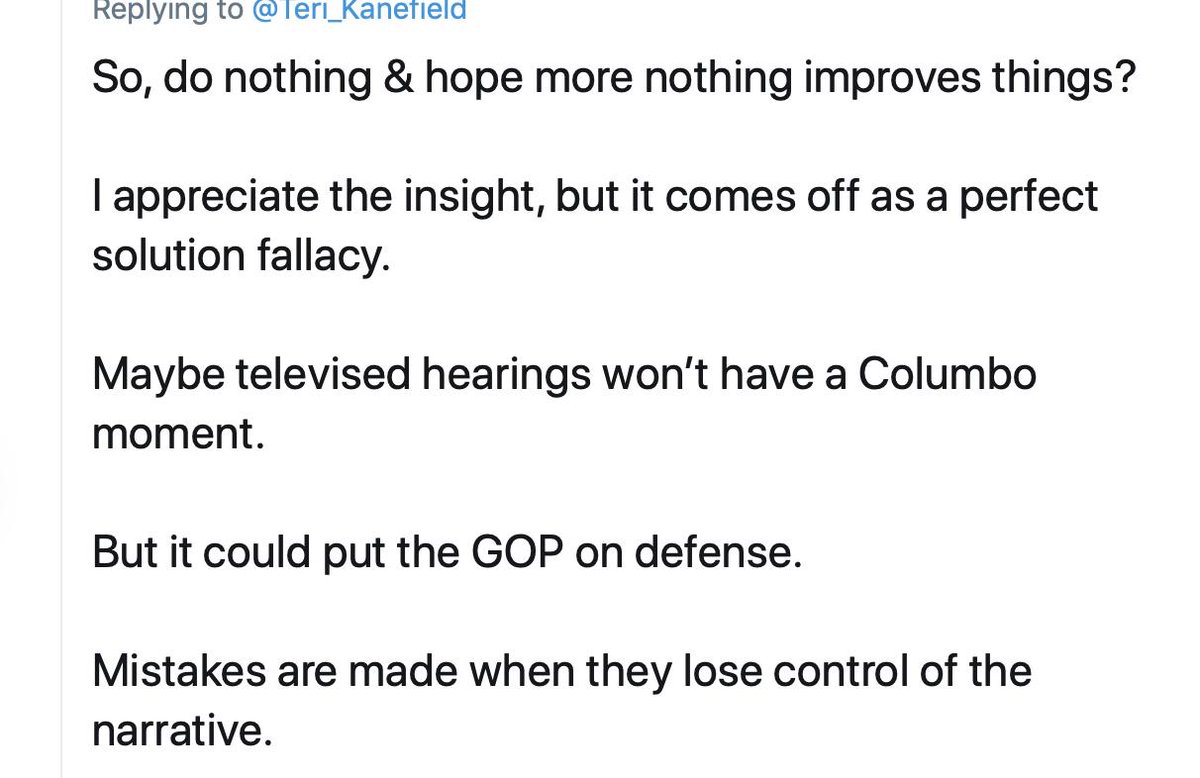 All my threads are also blog posts.

I combined today’s and yesterday’s into a single post, here:  https://terikanefield-blog.com/trump-emboldened/ …
If you asked a good question and I don't answer, either I didn't see it or I'm pressed for time or I've answered so it will be on my blog.