Well would you look at that  https://www.theguardian.com/technology/2019/sep/25/revealed-how-tiktok-censors-videos-that-do-not-please-beijing …

ByteDance's leak confirms some of what I had speculated surrounding Hong Kong — but there is still so much we don't know. What I saw in the data was that TikTok appeared to have shadow-banned the entire Hong Kong region, similar to what is described as "visible to self" here. 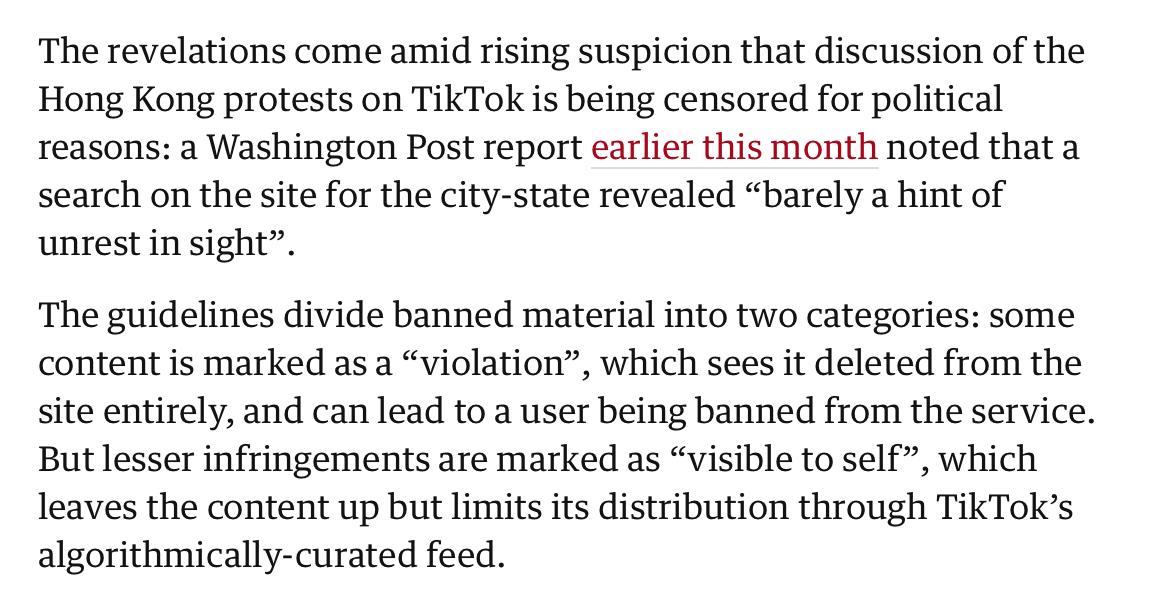 But there is also evidence to suggest that TikTok's moderation guidelines — the keywords, events, and sores — did not stop with moderators, and was implemented algorithmically, disappearing content at creation time. Not just acting as a one-way mirror for feed distribution.

This reporting, and the keywords & policies it describes, paints a picture of the regulative environment that ByteDance fears. ByteDance sits between global ambition & CCP's ramp-up, and it is now evident which of those facets wins. It's a race for survival, w/ the world a stage.

These are the questions that ByteDance needs to answer:
- Has TikTok siloed or shadow-banned regions? How is content segmented across the world?
- Did TikTok algorithmically censor & queue UGC pertaining to antiELAB 1) at creation time 2) in hashtag indexing 3) for feed distro?

ByteDance says the leaked guidelines were retired in May. Yet, as written, they should have contained Kashmir's violence & propaganda. I watched bodies burning on TikTok in Feburary. But I oddly didn't see Hong Kong's peaceful movement. I want to know why.

It is those unwritten guidelines, with Xi Jinping standing above moderated world leaders on TikTok, that is the most eerie of this machine. The weaponization of soft power is not just in the walls they build, but in the holes they leave behind & boost too.

TikTok will recant mistakes, become more transparent, & will embrace beacons of wealth & recede from China. But what will come of the fear ByteDance left behind in Hong Kong, w/ its youth in silence, afraid to share, perpetually glancing over their shoulders? It's already won.