There's again turbulence in the #ECB. The resignation of S. Lautenschläger, a senior German member, was a shock to many.

That list starts from the 'Outright Monetary Transactions' (OMT) program, the #ECB launched to bring down the borrowing costs of countries during the 2011/2012 debt crisis.

In this M. Draghi succeeded 👇, but the price was steep. 2/ 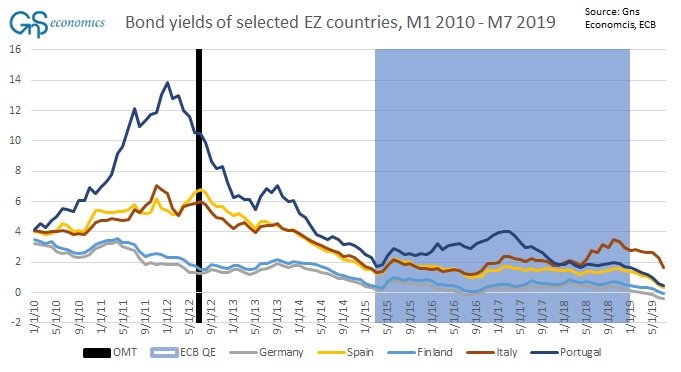 Many don't know, but the "zombification" of the European economy started from the OMT program.

Things got materially worse, when the #ECB enacted negative interest rates in June, 2014.

Slowly but surely they started to erode the European banking sector, which has been in a bad shape since the 2008 crisis.

And further eroded the banking sector by pushing them towards riskier lending.👇5/
https://gnseconomics.com/en_US/2018/03/15/quantitative-tightening-to-boldly-go-where-no-cb-has-gone-before/ …

Our banks are teetering, capital markets are in a bubble, zombie corporations are abound and #recession looms.

The #ECB has effectively destroyed the economy of the #Eurozone and left no ammo for the impending #recession. 6/

So, is it really a surprise that, as last stand against the destructive policies of the #ECB, one of it senior member resigns?

No, because the ECB has become the biggest risk to economic and financial stability in the #Eurozone. 7/

We just have to hope that someone will stop this money conjuring madness before it also destroys our monetary system.

Our judicial system (ECJ) has become a joke by allowing the ECB to (effectively) break the Article 123 of the TFEU with its QE. 👇 8/
https://eur-lex.europa.eu/LexUriServ/LexUriServ.do?uri=CELEX:12008E123:EN:HTML …

Our hope now lies with the German Constitutional Court and/or some brave politicians, who would have the courage to rally against the #ECB madness to save what's left of our economy.