EXCERPT2/ The Ukrainians (in this excerpt of their call readout) acknowledge the quid pro quo preventing them from getting Javelin missiles involves the corruption investigations Trump wants them to advance (matching this readout with the summary of the call previously released):

EXCERPT3/ Tons of witnesses to be spoken to:

EXCERPT4/ The call is followed by a massive internal cover-up: 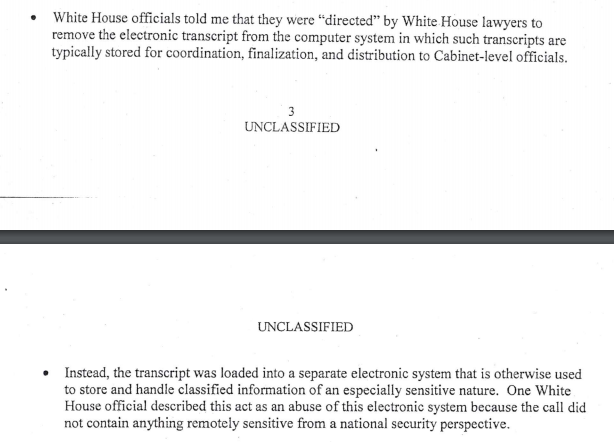 EXCERPT6/ Remember all the talk about whether there was any "follow-up" to the June 2016 Trump-Russia meeting at Trump Tower (which also involved illegal foreign donations)? *Tons* of *immediate* and *well-documented* follow-up here: 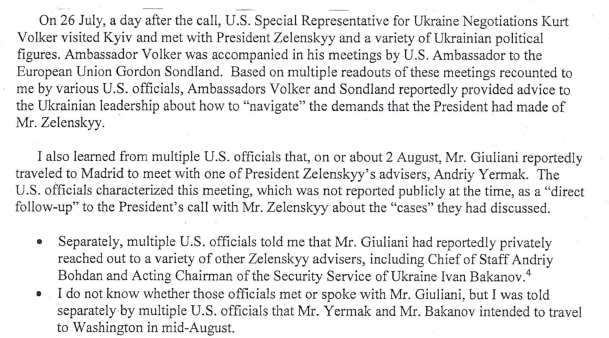 EXCERPT7/ Remember, "peace in Ukraine" has *consistently* been diplomatic code for "sanctions relief for Russia." One wonders if it wasn't just Biden that White House officials discussed with Ukraine in follow-up meetings—but the "grand bargain" or standalone sanctions relief.

EXCERPT8/ There's a ton more on this in the memo, but Trump was trying to keep a corrupt prosecutor (Lutsenko) in office despite the fact Zelensky didn't want him there, because Trump felt Lutsenko—again, a corrupt prosecutor—would do dirty deeds helpful to Trump to keep his job:

EXCERPT9/ I hope people will understand Trump's *whole political history* is about him using non-government actors to secretly negotiate U.S. policy. He had Manafort and Flynn secretly negotiating U.S. policy during the 2016 campaign, and Kushner, and many others. This is his MO.

EXCERPT10/ Volker and Sondland are positioned by the whistleblower as *friendly* (i.e., loyal to the United States, not Trump) witnesses who might be willing to tell the truth to investigators about what Giuliani and Trump did (i.e., bribery, extortion, and illegal solicitation):

EXCERPT11/ This whole story is a *mirror* of the Russia case, all the way down to Trump using improper persons to negotiate U.S. policy with a foreign power in "neutral" European capitals (here, the secret meeting is in Madrid between Giuliani and Ukrainian agents). So familiar.

EXCERPT12/ *Everyone* understood this was a quid pro quo. A shakedown.

PS/ And then, to top it all off, Rudy Giuliani issues *publicly* what he very well knows would have been taken by the Ukrainians he had recently met as a threat against Ukraine: