Here's Ben Shapiro proving he hasn't read PROOF OF COLLUSION *or* PROOF OF CONSPIRACY. I was tweeting about Giuliani's suspicious activities in Ukraine—in tweets seen by hundreds of thousands, per Twitter stats—in May 2019. So were others. The whistleblower was just confirmation.

1/ In the May 2019 tweet below, I identify the Ukrainians Rudy was working with as "pro-Kremlin" because I maintain that—in 2019 as in 2017—the evidence confirms Team Trump only works with Ukrainians comfortable with the "grand bargain" it worked out with 6 nations pre-election. 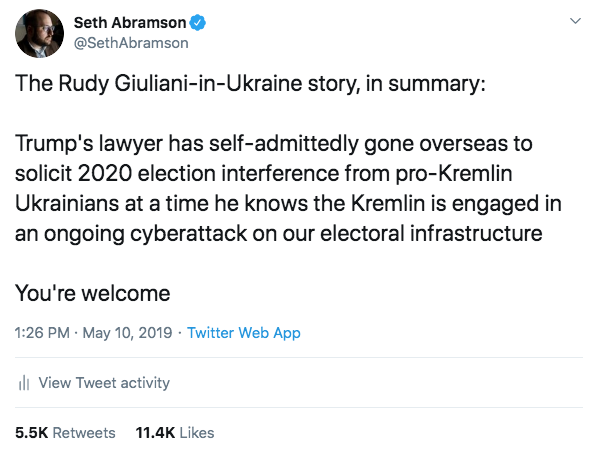 2/ I also wrote—in May 2019—that the reason Giuliani was being so bold in illegally soliciting foreign donations is that Mueller let Trump Jr. get away with it (inexplicably). We're now finding that line of analysis was correct, too; the GOP is hanging on Mueller's words, oddly.

3/ Ukraine's involvement in the multinational grand bargain I write about in PROOF OF CONSPIRACY is as follows: Trump had to use his energy-policy team to convince Ukraine to agree to the US dropping sanctions on Russia. Ukraine's Turboatom would get a big contract in recompense.

4/ There's been talk about how Trump kept Pence from attending Zelensky's inauguration to signal he wanted more election aid from Zelensky than he was getting. True. But he *also* sent his Energy Secretary to Ukraine, and the "grand bargain" is likely why:  https://www.amazon.com/dp/1250256712?tag=macsupaduinstalpa-20 …

5/ So @benshapiro—who lives in an alternate news universe in which "Spygate" (the conspiracy theory behind Trump's treachery) is the only scandal involving Trump and Russia—is confused now. But if he lived on Earth Prime, he'd know how much we already knew about Rudy and Ukraine.