The trailer for the Lil Peep Documentary dropped 3 hours ago, and it already has 230,000 views. The post-mortem YouTube Bell notification rippled across his ever-persistent fanbase. It's just so rare to see that. A tragic story that I'm glad is being told.

There was something so unique about that artist, his SoundCloud rise, and the fanbase that he cultivated. He was a rare bridge between North America and Eastern Europe — even now, today, the majority of those comments pouring into YouTube are in cyrillic.

There were a lot of headlines describing the height of America's addiction, of the young people gripped by it, and the pain, the anxiety & depression rates exploding. Unless it hit you personality, it almost didn't feel real. That changed, for the Internet, after @lilpeep's death

Lil Peep road into the SoundCloud scene atop the Xanax wave. It was his unique sound, of capturing & rehashing early-2000s projects into emorap, that set him apart. But it was the Internet rise, the e-boy accessibility, that truly built his fanbase. He was authentic, within reach

It was the Xanax that killed him, & his fans, the Internet, watched that devastating downward spiral in near real-time on Insta. From different angles, from his close fans & his friends, his death played out on Stories for the world to watch. Devastating is the only word for that 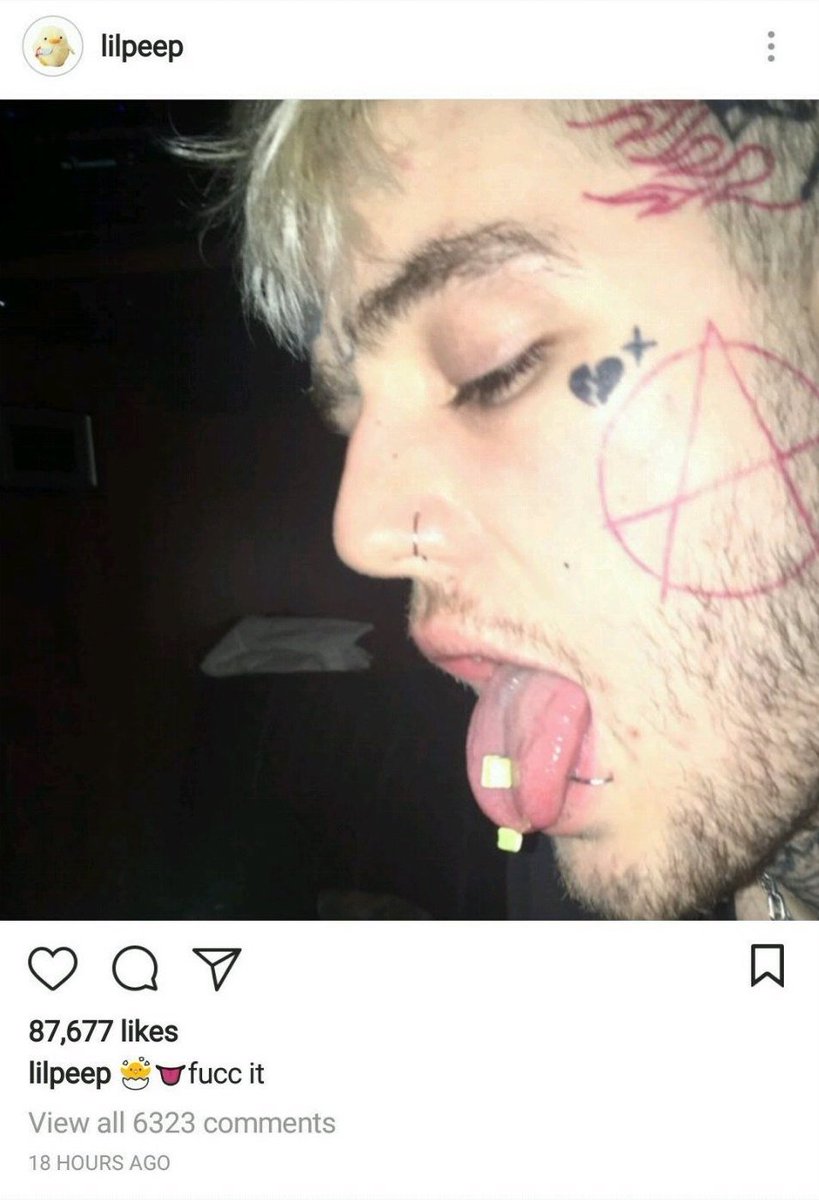 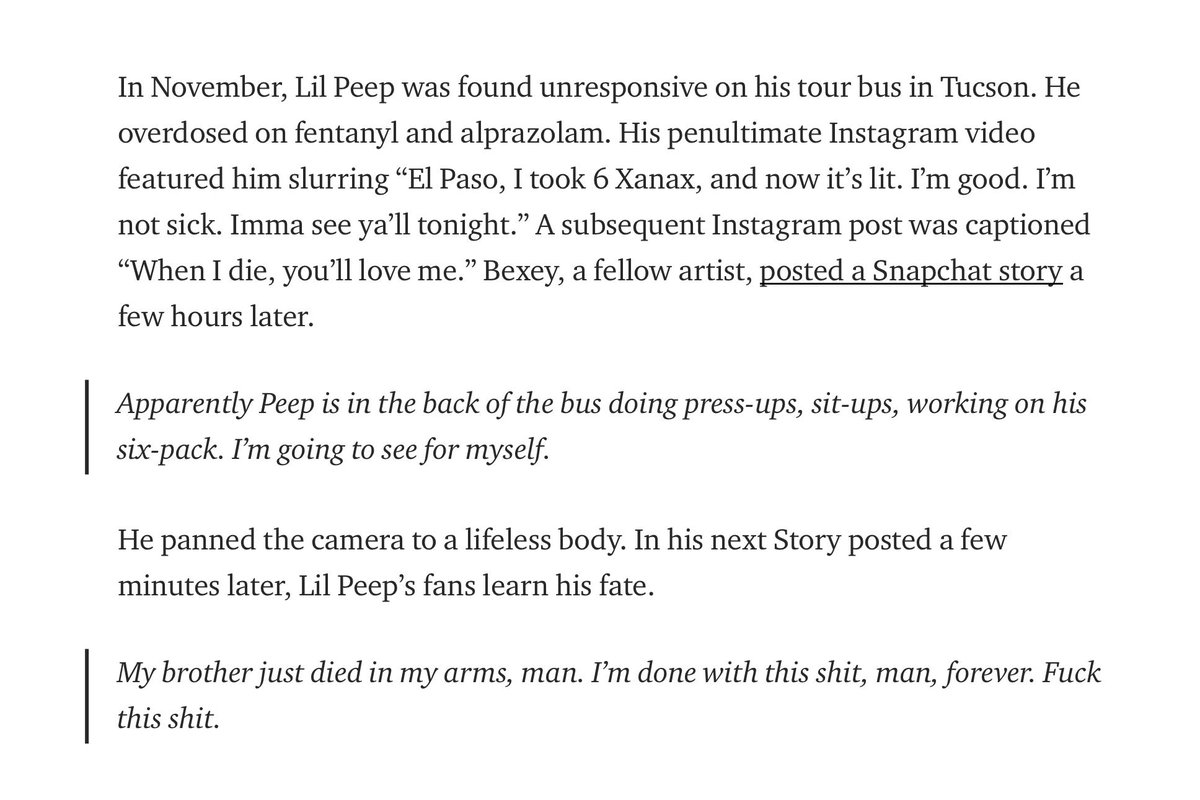 The darkest thing about the Xanax wave, of the street bars cut w/ fentanyl that killed young people like Lil Peep, was just how public it was. Benzo prescriptions & misuse were exploding. The pain & addiction was in the numbers. The drug worse than opioids was drowned by them.

Artists like Lil Peep did not create the Xanax wave. They may have road it into culture as figureheads, but truly, they were its victims — the tidal wave began long before their music, & long before their pain. The counterfeits & abuse had already matured  https://www.bbc.co.uk/news/resources/idt-sh/fake_xanax_the_uks_largest_ever_dark_net_drugs_bust …

One of the most frustrating aspects of the social media ecosystem surrounding these artists was just how accessible the counterfeits were. Places like Instagram weren't just a memorialization of their culture, but a true marketplace, organized by hashtags.

Instagram did not create this epidemic, but it did ignore it. The market had matured from Europe, the prescriptions in the U.S. had reached harrowing levels, the abuse was already in the numbers — and we just watched it sweep American youth, as its victims rapped about their pain

Before this artist had succumbed to this epidemic, before this story became one far more depressing than the grungy aesthetic of an eboy, there was something so forward-looking about the Internet kid punk, & the emo of the Instagram era, that he pioneered

This was not merely his creation. This was the Internet's angst, & anger. It was a new-age punk aesthetic he had materialized as a person. It was largely born out of Russia — and it was in this aesthetic & what it represented, that let him bridge markets.

There was something about that time period, of peak SoundCloud, that blast these artists into the world. On the surface level, they were embodied as outlandish meme rapping junkies with colorful hair & face tats. Many were exactly that meme — an Instagram culture personification

But it was in artists like Lil Peep where you could see something more powerful beneath the surface. Unfortunately, now he & his music are a time capsule — as much as it was to be, & is, a projection. It captured Internet angst, & a real, distinct evolution of the Opioid Epidemic

In artists that emerged from the same underworld, you can see similarities beneath the surface. What appears very different, feels the same in the imagery & in its multilateral, youthful, pain-filled origin. Much is a protest; the rest are cries for help.

As an observer, it was hard for me to understand what I was seeing — but it felt so different, maybe ephemeral. I now believe the posthumous holding pattern of this artist & his work, visible in today's view counts, describes a world still active, still lost, merely absent of one

I'm glad this artist & his community are being captured in a documentary. It's a tragic, sad, & just frustrating story—of a world largely glanced over, siloed, rooted around the globe, yet remaining below the surface of culture's zeitgeist. Just maybe it was the leading indicator