BREAKING: The Same Two Criminals Who Worked With Rogue FBI Agents to Illegally Leak Info About the Clinton Probe and Blackmail Jim Comey Into Reopening It in October 2016, Joe diGenova and Rudy Giuliani, Were Illegally Negotiating U.S. Policy With Ukraine  https://www.thedailybeast.com/joe-digenova-and-victoria-toensing-worked-with-rudy-giuliani-to-dig-up-ukraine-dirt-on-joe-biden-report …

1/ I did a deep public-records dive on Joe diGenova and Rudy Giuliani's illegal activities in October 2016—illegal activities that gave Trump the election—and no one listened or cared. That was December 2016. Now these same criminals are surfacing again in an impeachment inquiry.

2/ When you *don't hold criminals accountable*, they *continue to crime*. I say this as someone who worked in the criminal justice system for years. DiGenova and Giuliani have gotten away with knowingly facilitating crime for *years*—and *this* is the predictable result, America.

3/ Here's a thread I did on Joe diGenova in early 2018—over a year and a half ago—that was part of a course of research confirming that diGenova *admitted in public* that he aided rogue FBI agents in leaking to media in October 2016: a shakedown of Comey.

4/ Here's what I'm telling you: if Inspector General Horowitz had ever delivered on his promise to investigate the October 2016 Giuliani leaks, he would have found that the Trump campaign—possibly Trump himself—worked with diGenova and Giuliani to aid FBI rogue agents in leaking.

5/ Thousands and thousands of people on Twitter retweeted my research—but it was never picked up by media outlets, including the hundreds and hundreds that follow this feed. So now we're going to act "surprised" that Trump was using diGenova and Giuliani to shake down Ukraine.

1. DIGENOVA and GIULIANI shook down COMEY to illegally assist Trump in winning in 2016.

2. DIGENOVA AND GIULIANI shook down UKRAINE to illegally assist Trump in winning in 2020.

If you don't *investigate public facts*, these men *re-offend*. See?

7/ I keep telling people that Trump's group of trusted henchmen—those who will commit crimes for him—is small. You can track their actions over time. DiGenova and Giuliani are—at least based on the available evidence—in that group. So are Kushner, Trump Jr., Manafort, and Flynn.

8/ I wrote in PROOF OF COLLUSION that Sam Clovis was the man who set up the Trump National Security Advisory Committee in 2016—the Committee from which *all* the secret Russia contacts came. And when diGenova became his lawyer, I said there—see that?—you need to follow this guy.

9/ DiGenova—a Trump legal adviser—gets sent to where the criming needs to happen: the dirty tricks that flip elections. He had to represent Clovis because there was a risk that Clovis would spill the beans on Russian collusion. Then (we now know) he was sent to crime in Ukraine.

10/ What's stunning: not only did diGenova and Giuliani try to steal the 2020 election *and* the 2016 election, and not only did they make both attempts via a *shakedown*, they were violating the *same statutes* in both cases: the Logan Act and the Hatch Act. It's no coincidence.

11/ As someone trained—like diGenova and Giuliani—as an attorney, I'll say that if you were a dirty lawyer, you'd likely not risk committing a crime that's regularly prosecuted. Instead, you'd find statutes—whether in real estate, politics, or elsewhere—that are usually ignored.

12/ So DiGenova and Giuliani *correctly* determined that facilitating Hatch Act violations with the intent of blackmailing the FBI into reopening a politically fraught investigation days before a national election isn't something our system knows how to investigate or prosecute.

13/ Just so, DiGenova and Giuliani *correctly* determined that participating in Logan Act violations with the intent of extorting Ukraine—or, as you like, inducing Ukraine to conspire in acts of bribery with the president—would confuse our system of laws, and result in no action.

14/ The reason I blew my stack about Trump using Flynn to violate the Logan Act—see my 2017 thread below—is because I *knew* that Trump, like diGenova and Giuliani, were not only going to use the act (which is rarely prosecuted) *once*, but systematically.

15/ At the time, I received major pushback: is the Logan Act "all you got," folks asked? It wasn't, of course—as robustly detailed in the 1,400 pages of PROOF OF COLLUSION and PROOF OF CONSPIRACY—but they were missing the point: it wasn't *one* Logan Act violation, but *dozens*.

16/ I've worked with 2,000+ accused criminals, and understand the way (the very worst of them) thought: if I get away with something once, that's the thing I'll do 100 times. Trump, diGenova, Flynn, Giuliani, Don Jr. and Kushner saw that no one would *ever* enforce the Logan Act.

17/ So the issue wasn't ever, "Did Flynn secretly negotiate with a foreign power under false color of authority once?" It was if he started doing it—with Trump's knowledge—when he became a Trump adviser in 2015. And whether his secret promises helped induced Russian interference.

18/ So now we know Trump was willing to use multiple top advisers to violate the Logan Act in a way aimed at inducing interference in an election. How stupid would we have to be not to see that *all the evidence shows he did the same thing with Flynn and Russia in 2016*? Wake up!

19/ These men are dangerous. They've found the statutes that keep us free—but so rarely get violated they *also* rarely have to be enforced. And they've been violating them for *years*. Why didn't we listen to Kellyanne Conway when she said she didn't care about the Hatch Act?

20/ Trump has raised up a goon squad around him that commits what appear to be petty federal crimes in ways that escape detection or prosecution but profoundly influence geopolitics. The *same people* who did this illegal sh*t in 2016 are doing it again now. Wake up America! /end

PS2/ Crimes recur. Look at how relevant this 2017 thread about Flynn and Russia is now with respect to diGenova and Giuliani and Ukraine (and even Trump telling Ukraine they could and indeed should negotiate with a private citizen, and then hiding the evidence of that directive): 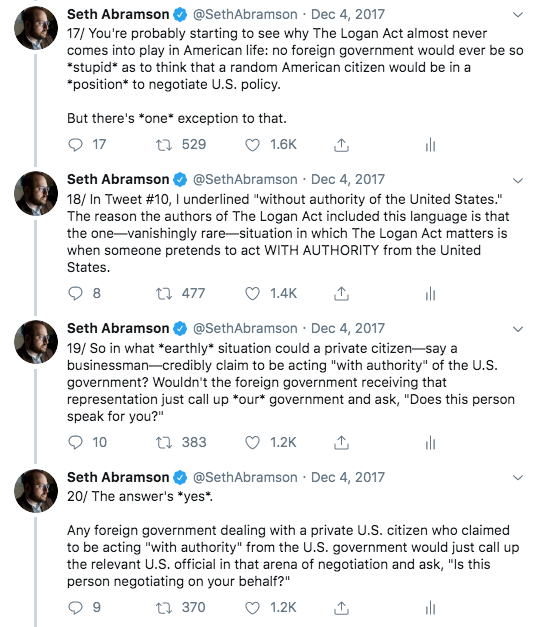 PS3/ In early 2018, Trump told friends—per NBC—only Manafort could take him down. Mueller then gave us sufficient facts to confirm Trump tampered with Manafort to keep him quiet. Now the US wants to extradite a Manafort associate.

Guess who's repping him?  https://www.bloomberg.com/news/articles/2019-09-23/trump-friendly-lawyers-join-legal-team-of-ukraine-s-firtash …

PS4/ Best of all, per The Washington Post back in the 1990s, diGenova was partly behind the impeachment of Clinton in '98—suggesting he was selected by Trump specifically *because* he has a long history of using dirty tricks to try to destroy the Clintons.  http://www.washingtonpost.com/wp-srv/politics/special/clinton/stories/couple022798.htm …

PS5/ Guess what? It was *Hatch Act violations* at the center of that 90s attempt to destroy the Clintons! From WP: "Toensing was approached by an intermediary for a Secret Service agent who had supposedly seen something untoward involving President Clinton and the former intern."

PS6/ In other words, for *decades* rogue federal law enforcement agents have known that if you *don't* want to follow valid whistleblower provisions and *do* want to illegally get a story that'll damage Democrats to the media, you go to diGenova.

PS7/ By the same token, if you're a GOP politician and you want to use an attorney to go outside law enforcement channels to illegally get a story that'll damage a Democratic opponent into the media, who do you go to? DiGenova. True in the 90s, still true now. Same with Giuliani.

PS8/ I'll say it again: no one stopped these people in the 90s; no one stopped them in 2016; so of *course* they felt empowered to go around conventional law enforcement channels to try to interfere with an election in 2020.

It's literally *what they're known by everyone to do*.

PS9/ Here's Trump adviser Kellyanne Conway using her *taxpayer-funded salary* to again and again and again *illegally* campaign for Trump in violation of the Hatch Act (when caught she said "blah blah blah" and "let me know when the jail sentence starts"):  https://www.youtube.com/watch?v=Wy6VWNwKHbg …

PS10/ Erosion of the rule of law is real—and when attorneys talk about it should be taken seriously. The GOP says the Hatch and Logan Acts don't matter and can be violated at will by Trump and his people—well, the result is *literally* the end of American elections and democracy.