Spoiler: They’re not working this time, partly because Trump lost control of the narrative.

First, let’s be clear on what Trump and Giuliani tried to do.

In addition to inviting a foreign country to help sway the 2020 election on Trump's behalf. . .

1/ . . .Trump (at Russia's behest) tried to get Ukraine to admit that Ukraine, not Russia, attacked the 2016 election. See:
https://www.npr.org/2019/09/28/765322855/where-russia-fits-in-with-trump-ukraine-affair …
Thus Trump & Putin teamed up to bully Ukraine into saying former Ukrainian officials were the guilty party.
See @JuliaDavisNews

2/ Because the whistleblower uncovered the plot, we don’t know how it would have unfolded.

Trump isn’t usually caught by surprise by a story.

Trump usually manufactures stories, catching everyone else by surprise, watching as everyone plays whack-a-lie. 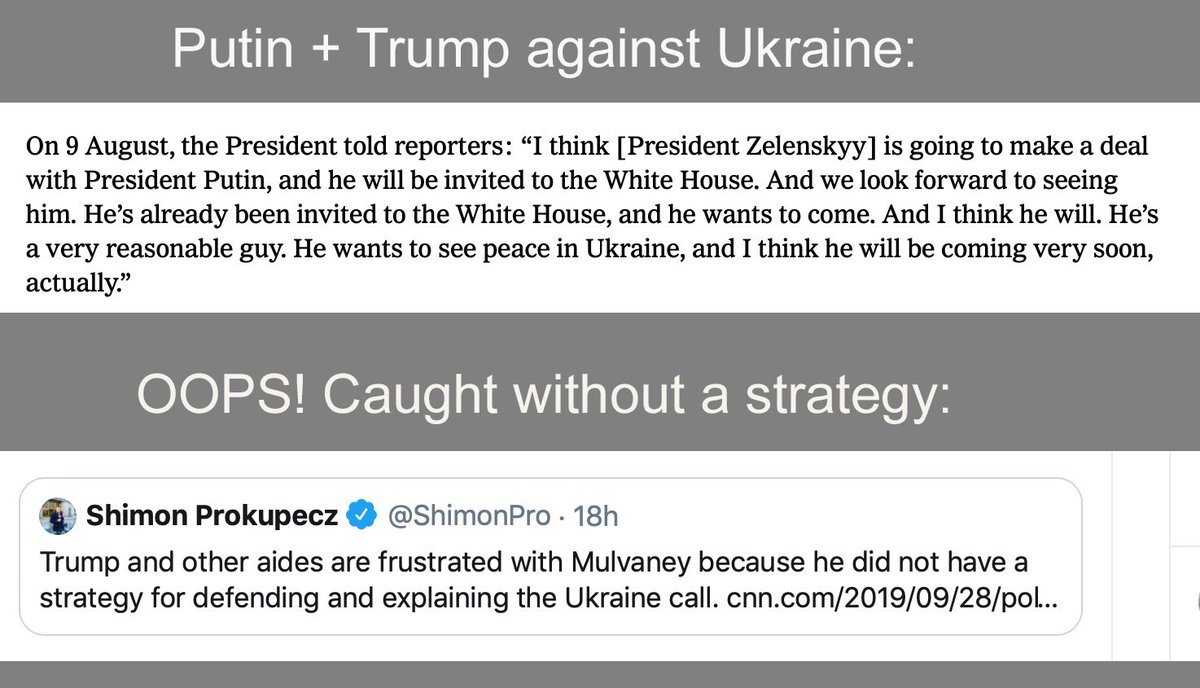 3/ Trump’s M.O. is to create a fiction and force us all to become actors in the show.

Here are his defenses.

Defense #1: Trump (an American hero) is a victim of Deep State operators doing everything they can to bring him down. 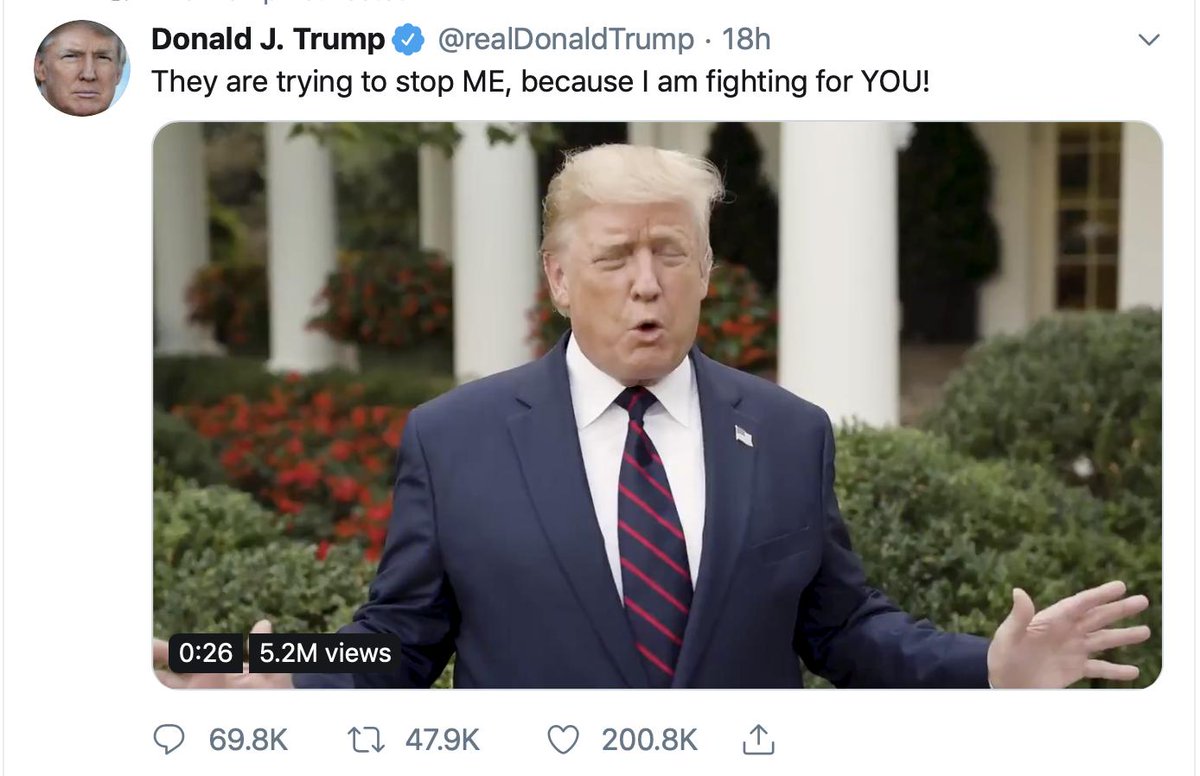 4/ You know this defense is in play when Team Trump talks about Comey, FISA warrant, Steele Dossier, Peter Strzok, etc.

For a perfect illustration of this defense, see Jim Jordan’s performance here:

5/ This defense takes the form of “the whistleblower was biased” or “the complaint is based on hearsay.” See examples⤵️

What makes this defense hard: Trump was caught red-handed in the act.

And what Trump did was simple enough to fit into a soundbite. 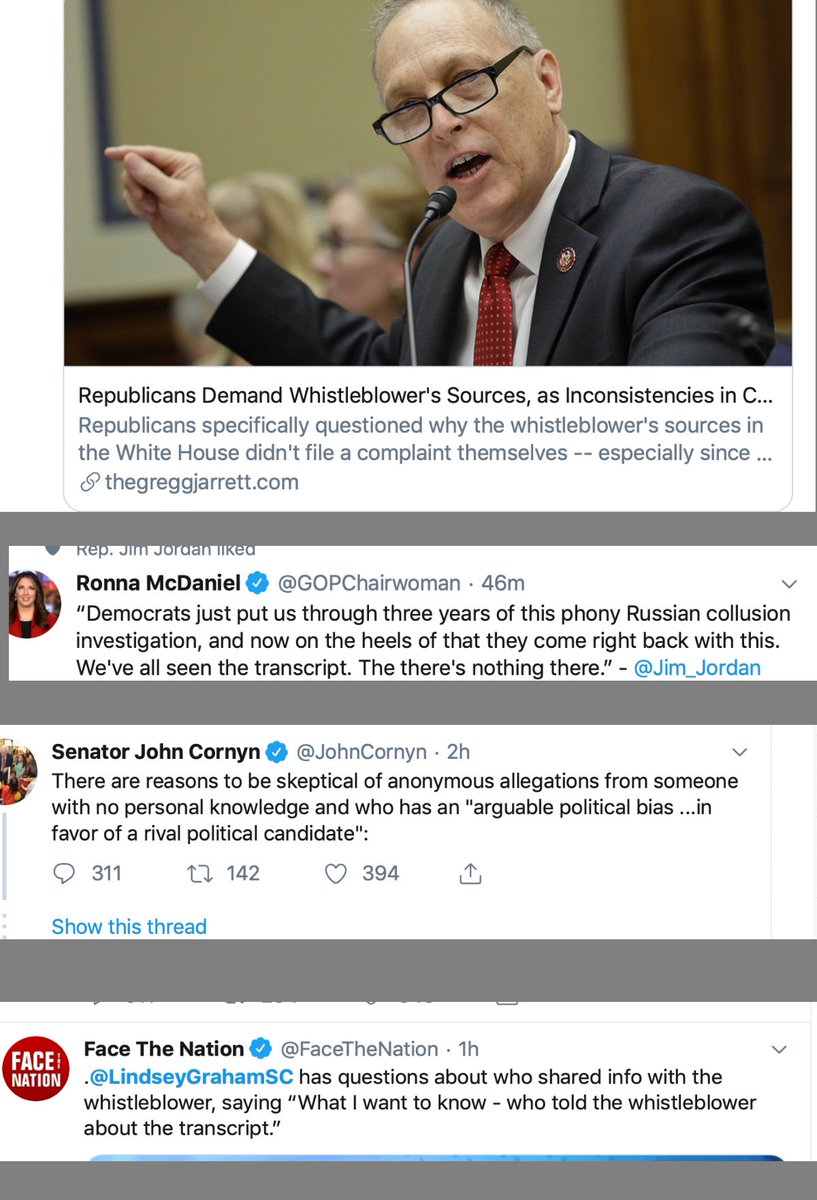 6/ Remember, “Deep state” is code for what the GOP has been trying for decades to destroy: regulatory agencies, because those regulations stop white men from cheating and grabbing what they want.

8/ When Collins told Mueller in the hearing that he wants to make sure the FBI never spies on another American again, take it literally: He doesn't want the FBI to exist.

Whataboutism overlaps with the Victim Defense: If all politicians are equally corrupt, going after Trump is pure politics: He's being targeted by his political enemies.

10/ Defense #3: Trump was acting honorably in trying to stamp out corruption in Ukraine and get to the bottom of who really hacked the 2016 election⤵️

Defense #4: Trump was within his rights as president.

11/ We've seen #4 before. Remember: “There was no obstruction of justice because the president has the right to fire anyone he wants.”

This is the most important because this is shaping up to be Trump’s defense going forward.

12/ The idea behind #5 is that unless Trump’s enemies can prove each element of a crime beyond a reasonable doubt in a court of law, Trump skates free.

The problem is the limits of the federal criminal code.

13/ Some things are dangerous if POTUS does it, but not an ordinary citizen.

For example, if an ordinary citizen is entirely propped up by Russian money and is dependent on Putin for income, there is no crime.

If the President is propped up by Putin, the nation is at risk.

14/ If a US citizen asks the Ukrainian President for a favor, no harm. The favor can be safely ignored.

Laws apply to everyone; criminal laws can't specifically apply only to the POTUS.

That is why Pelosi is framing the Ukraine scandal as a national security risk, not a crime: 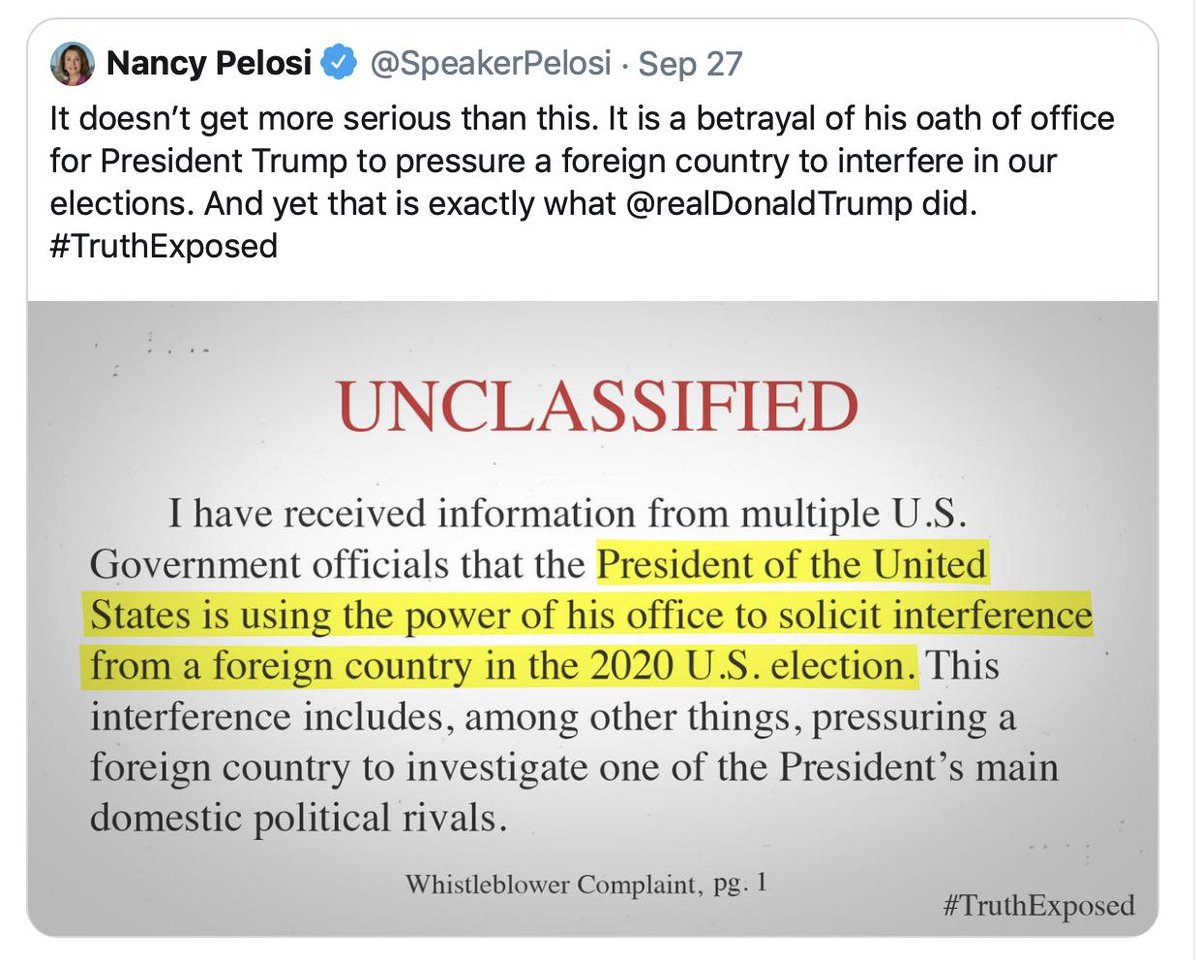 15/ Moreover, rules of criminal procedure protect a defendant because we don’t want innocent people going to prison or executed.

A citizen accused of a crime can cross his arms over his chest, refuse to talk, refuse to turn over evidence, and say, “Prove it.”

16/ Impeachment and removal are about removing a corrupt president from office.

It's NOT a criminal trial.

So the same protections don’t apply.

The "It wasn't a crime" defense was effective in countering the Mueller report, so, no surprise, Team Trump is using it again⤵️

17/ The problem is that the public can easily see what happened in that phone call and the surrounding events.

Nonetheless, these "defenses" will continue to work with about a third of the population for various reasons.

18/ Because 2/3 of the Senate must vote to remove the President, and because red / rural states are more heavily represented in the Senate, the 1/3 that will believe (or pretend to believe) the lies may be enough to keep Trump in office until Nov. 2020.

Particularly because the Ukraine plot was foiled, and most of the population is on to his game.
https://www.cbsnews.com/news/trump-impeachment-inquiry-poll-cbs-news-poll-finds-majority-of-americans-and-democrats-approve/ …

(end/ I may add comments and questions)

Tony, I'm sure what the Articles of Impeachment look like depends on what comes out in the next few weeks.

Pelosi's refrain all along has been that we have to follow the facts wherever they lead (as it should be, actually).

I mentioned that Trump's usual game is to keep everyone playing whack-a-lie (Tweet #2)
This is another propaganda technique used frequently by Team Trump. A Rand Institute researcher calls it the Firehose of Falsehoods.

. . . against the Whistleblower complaint because Team Trump can't get ahead of the story.

The Firehose of Falsehoods is partly effective in defining the narrative. First impressions are hard to correct.

Pelosi is putting the spotlight and emphasis on national security.

She doesn't use the words "crime" or "bribery" or "extortion."

Team Trump wants this to be a criminal matter.

Pelosi is saying it's much larger.

All of my threads are also blog posts. You can view this one here:  https://terikanefield-blog.com/trumps-defense-are-not-working-this-time/ …