I remember when I wrote my "October 2016" chapter for PROOF OF COLLUSION (published by Simon & Schuster in November 2018) there was some consternation among folks helping to work on the book as to why I wrote so much about Joe diGenova—because no one else was. Well, now you know.

1/ I was trained in criminal investigation. In a case of potential conspiracy, you *have* to know who the known associates of the suspect are, and you *have* to have some sort of a *timeline* for their intersection with the case. DiGenova and Trump's intersections go *way* back.

3/ *Every single movement* of Trump's lawless band of general agents—from 2013 onward—should have been tracked. That includes (in some cases beginning in 2015) Trump, Cohen, Trump Jr., Kushner, Giuliani, Flynn, Clovis, diGenova, Prince, Barrack, Pecker, Manafort and a few others.

4/ Other names include—e.g.—Sessions, Gates, Lewandowski. Others briefly dovetailed their lawlessness with Trump's—Bud McFarlane—or were recruited briefly into his lawlessness (K.T. McFarland) or for special purposes (Papadopoulos). But all the major criminal incidents involve...

5/ ...a small group of associates with no conscience, morals, or belief in law. We're talking fewer than 20 people being involved in 95% or more of the likely illegal events of these two scandals, with perhaps 10 to 15 more being specially tasked for minor roles in a few of them.

6/ Another category includes foreigners/foreign-born persons—in a few cases native-born persons—acting first and foremost on behalf of other countries openly or covertly: Nader, al-Otaiba, Dermer, Birnbaum, Zamel, Sater, Simes, and a few others. And one radical ideologue: Bannon.

7/ And there's virtually no one in major media systematically tracking the travels and meetings and public statements of this relatively small group of (globally and in total) 40 persons or so. But the moment you look—say, at Flynn's *travel*—the story appears almost immediately.

8/ So don't say "diGenova who?" He was in this group and so of *course* appears at *many* points in Trump's crime spree. I'd venture to say he's involved with elements of it even I—and other deep-divers—have never encountered. It's his *assent* to be part of it that matters most.

9/ I'd go further: anyone in Trump's small "circle of trust" should've been considered by investigators. For instance, one of his two best friends is Howard Lorber. When we learned Trump Jr. called Lorber in the midst of negotiating a secret Trump-Russia meeting at Trump Tower...

10/ ...the fact that *no one* had been tracking Trump's rogues' gallery meant Trump Jr. could say "See? I was just calling a random family friend!" In fact, Lorber's name recurs in the Trump story, and so it's *fascinating* Trump Jr. called him—but most of America didn't know it.

11/ More recently, we learned Trump discussed Biden with Schwarzman. Media—thinking Schwarzman was appearing in Trump's saga for the first time—said, "Uh... he's connected to China?" But anyone who's tracking the crew knows it's more significant he's connected to Kushner and MBS.

12/ I represented enough accused criminals to see in Trump the signs of a career criminal—which *also* means he has a crew of associates who know what he is and *still* aid him regularly or on occasion. DiGenova and Giuliani are in the crew—and media should've known that in 2016.

13/ Most of us would *never* associate with someone who violates the law routinely—as Trump does. But there's a *different* type of personality that seeks out such an individual and—if he's powerful—asks him, "How can I be of service?" Joe diGenova is precisely that sort of worm.

14/ I think few of us will be around to see the entirety of Trump's story written down; his criminality will be studied for *decades*. But at least we can do now what media should've done a long time ago: recognize the story's *cast of characters*, and try to track their actions.

15/ What I did in PROOF OF COLLUSION and PROOF OF CONSPIRACY is I named the cast of characters; I proved how we know they're involved with Trump's criminality; I tracked all their known illegal acts; I showed how an investigative theory of the case would see to network such acts.

16/ So when we had ample evidence of an October 2016 "Trumplandia" conspiracy in the NYC FBI, itemizing all the individuals involved was key: Bannon, Prince, Flynn, Flynn Jr., Trump Jr., Giuliani, diGenova and a few others. And you know what? All these guys popped up again later.

17/ By the same token, when you look at the far-too-little-discussed 1MDB scandal, some very familiar names appear: Trump, Barr, Barrack, Lorber, Broidy. There's a predictability to the names that swirl around Trump—and the scandals they attach to—that no FBI CI agent is missing.

19/ So if you take all these aspects together—very few people willing to, in a position to, able to, or connected to the right people to commit certain crimes—and see that Trump is a node for a certain sort of crime, you can track his immediate crew and find *enormous* problems.

20/ So I hope anyone in media who had a "Wait, Joe diGenova? Why? How?" moment when The Daily Beast broke its news re: diGenova today will consider which other known associates of Trump with public-records-available travel, meetings, and statements they should be looking at. /end

PS/ Business Insider has more on these (I use this term advisedly, and it's a term I almost never use) monsters:  https://www.businessinsider.com/trump-lawyers-biden-digenova-toensing-ukraine-2019-9 … 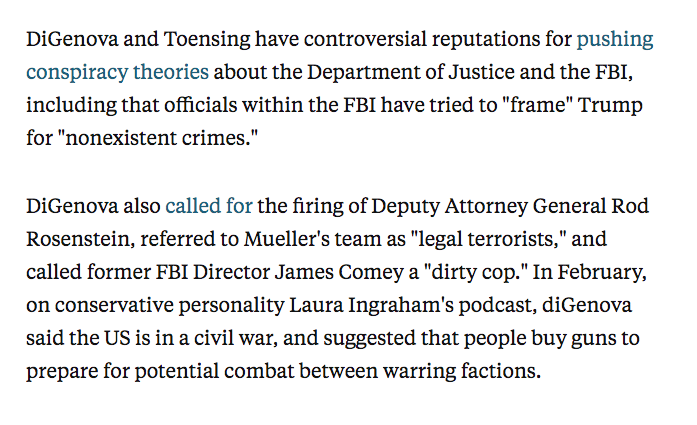