It's irresponsible for media to give this killer a platform without also directing viewers to—right now—the only book detailing the Khashoggi assassination and MBS's collusion with Trump before, during, and after it: PROOF OF CONSPIRACY.

I wrote the book to stop lies like these.

PROOF OF CONSPIRACY EXCERPT 1/ Trump and his team lied to America about their secret phone calls with MBS—which we now know were fraudulently placed in a classified archive to ensure no one would find them—in order to protect the man who had a Washington Post journalist executed: 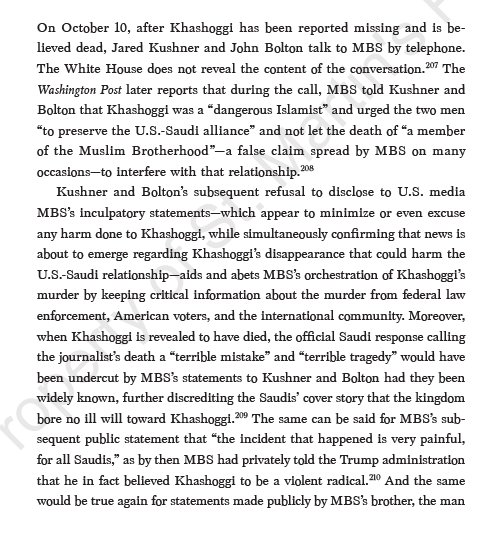 PROOF OF CONSPIRACY EXCERPT 2/ Proof of Conspiracy details—day-by-day—a 30-day course of lies to American voters and criminal cover-up that establish beyond any doubt that Trump and his family do not care about the deaths of U.S. journalists. These people are worse than you know. 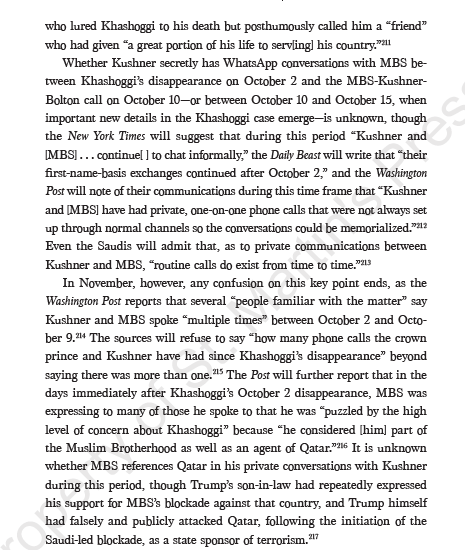 PROOF OF CONSPIRACY EXCERPT 3/ I had never written a nonfiction book that included a trigger warning—nor ever *considered* doing so—when I began writing Proof of Conspiracy. But I had to include one on pg. 445 of Proof of Conspiracy because what Trump's friends did was *so* vile:

PS/ I say this not self-aggrandizingly, but to emphasize that I did the necessary thousands of hours of research to know what I'm speaking of: I'm the only person to write two NYT bestsellers on Trump during his presidency—and I'm telling you history will recall him as a monster.

PS2/ Anyone who's read PROOF OF COLLUSION and PROOF OF CONSPIRACY knows why I say this and agrees—and knows those books are 1,400 pages total, with 6,000+ major-media citations. Those who haven't read the books simply don't understand—even if they think they do—how vile Trump is.

PS3/ We should have, a *long* time ago, understood that America is in a period of national emergency—not a time of simply "increased partisanship." If America understood the emergency we're in, U.S. media wouldn't be giving a Trump co-conspirator a glamorous, hour-long interview.

PS4/ According to The Intercept one man—Rex Tillerson—prevented Trump's pal MBS (who just got a glamorous, hour-long U.S. interview) from *unilaterally making war on Qatar via a ground invasion*. Folks—we have 10,000 troops in Qatar who would've been in the path of that invasion.

PS5/ When MBS found out Tillerson was the one who successfully prevented him from invading a *US ally* that hosts *10,000+ U.S. troops*, he used two top Trump advisers—George Nader and Elliot Broidy—to get Tillerson fired. This man—MBS—is an enemy of the United States of America.